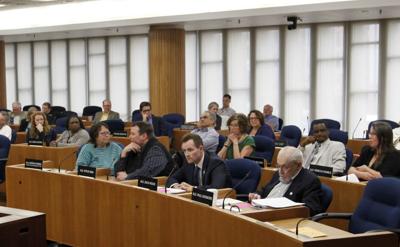 The Madison City Council doesn’t need or deserve a gigantic raise from $13,570 a year to $67,950. That would be a five-fold increase and more money than the $53,000 state lawmakers receive.

The City Council also is considering doubling the length of its terms — from two to four years — which would reduce accountability to the public because members wouldn’t have to defend their records to constituents as often.

Just as bad, moving from part- to full-time positions would increase campaign spending, making a bid for the council harder for an ordinary person who isn’t politically connected or wealthy. Instead of knocking on doors in their neighborhoods to earn grassroots support, candidates would need to raise tens of thousands of dollars to compete for more lucrative and powerful seats.

The City Council should reject this latest attempt, proposed by a city task force, to turn council members from low-paid public servants into professional politicians with full-time salaries, benefits and presumably staff and offices.

To its credit, the City Council hasn’t endorsed such a move — yet. But with the city preparing to redraw the lines of municipal voting districts following the 2020 census, a referendum could appear on local ballots in April.

Now is the time to tell your representative at City Hall that you appreciate his or her time and effort, but you don’t want to turn the City Council into a mini-Legislature with hardball politics and partisan dysfunction.

If the City Council did become full-time, the task force recommends reducing its size from 20 to 10 seats, and limiting members to no more than 12 consecutive years in office.

One of the task force’s goals is to provide more opportunity for people of color and the poor to serve. They could earn a living in the post.

But 40% of the City Council are people of color now, compared to just over 20% of Madison’s population. And the need for more campaign cash and political support would discourage people outside the city’s establishment from running. That means minority representation would be more likely to fall with full-time salaries.

Some of the task force’s recommendations have merit. For example, the City Council absolutely should reduce its vast array of boards, committees and commissions that take up too much staff and council time. Madison has an estimated 102 such panels with more than 700 people. Most cities have fewer than half as many.

In fact, Madison has so many citizen panels that the task force couldn’t definitively say how many exist. Madison has a bad habit of meeting and talking in excess without acting. The task force met more than 90 times over two years. We applaud the dedication. But did it really need to take that much time?

Madison’s drawn-out debates illustrate why having a strong mayor is important to get things done.

The better route to improving the council is through efficiency and technology. Let council members and the public continue to attend meetings by computer from their homes after the pandemic is over. Reduce the number of committees that council members serve on. Create a hotline for constituent concerns that reduces the volume of calls to council members’ phones.

But don’t turn our citizen servants into professional politicians. Keep the council rooted in local neighborhoods for the public good.

Bloomberg News: Trump is not to be trusted on preexisting conditions

Center Stage: Does your Madison alderman deserve $67,950 a year?

On this week's political podcast, Milfred and Hands highlight the pros and cons -- and their opposition -- to a full-time Madison City Council.