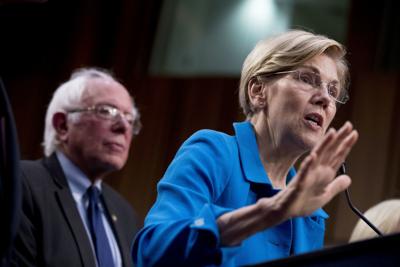 Bernie Sanders often points to Europe as his economic model, but there’s one lesson from the continent that he and Elizabeth Warren want to ignore. Europe has tried and mostly rejected the wealth taxes that the two presidential candidates are now promising for America.

Sen. Warren’s plan sets an annual 2% tax on assets above $50 million, and the rate rises to 6% for billionaires. Bernie Sanders wants to tax joint filers’ wealth between $32 million and $10 billion at rates of 1% to 8%. His advisers brag that this could wipe out half a billionaire’s wealth in 15 years. The candidates say these taxes will deliver “justice” and revenue to finance their vast new spending plans.

That’s also what Europe’s socialists said only to find it didn’t work:

The relatively small Swedish tax still was enough of a burden to drive out some of the country’s brightest citizens. IKEA founder Ingvar Kamprad famously left Sweden for Switzerland in the 1970s over onerous taxation. In 2007 the government repealed its 1.5% tax on personal wealth over $200,000.

The results? Some 70,000 millionaires have left France since 2000, according to the South African research group New World Wealth. In 2017 French President Emmanuel Macron, a former economic adviser to Hollande, scrapped the scheme in favor of a property tax. ...

Despite the obvious flaws, the wealth tax stays alive in the socialist mind because it is the ultimate populist envy tax. Donald Trump popped off in support of a wealth tax when weighing a 2000 presidential bid, no doubt without much thought.

The best argument against a wealth tax is moral. It is a confiscatory tax on the assets from work, thrift and investment that have already been taxed at least once as individual or corporate income, and perhaps again as a capital gain or death tax. The European experience shows that it fails in practice. The question is how much economic damage comes first.