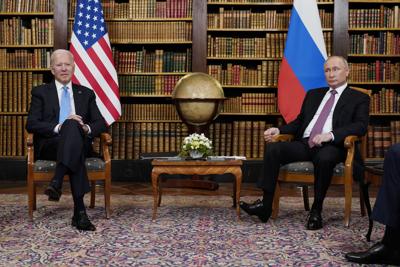 Rate the U.S.-Russia summit in Geneva as a success for President Joe Biden.

If you want to understand why, just look at what Vladimir Putin said back home the day after the summit ended.

“I want to say that the image of President Biden, [as] portrayed by our and even the American press, has nothing to do with reality,” Putin told alumni of a Russian management program, by video. (He was referring to constant efforts by Russian state-controlled media, along with Trumpist media, to portray Biden as senile.)

The Russian leader said his U.S. counterpart barely looked at his notes in more than two hours of direct talks. “Biden is a professional,” Putin went on, “and you need to work very carefully with him so as not to miss something. He himself does not miss anything, I assure you.”

So why would the Russian leader refute the state-controlled media messaging on Biden, whose tone is set by the Kremlin? Why would Putin praise Biden’s professionalism to an obscure Russian audience — and note the need to deal “very carefully” with the U.S. leader?

I put that question to Yevgenia Albats, who clued me into Putin’s remarks, and is one of the few independent journalists still working in Moscow. Her answer strengthened my assessment that Biden did achieve his goals.

Not only did Putin praise Biden after the summit as “a very balanced, professional man” and a “very experienced” politician, but he also was messaging Russian media that they should do likewise. In other words, the Kremlin leader, whose country suffers from serious economic and health problems, may need that businesslike relationship more than the United States does. And he may want to prepare his public.

If this thesis proves correct, it might offer potential room for at least small progress on critical issues like arms control and cyberhacking.

Biden effectively tested that thesis at the summit, with absolutely no illusions about Putin’s lies on cyber, military incursions and human rights. He and Putin set up working groups on weapons issues and cyber that will determine in a few months whether Putin is serious or pretending.

“Biden is absolutely right when he said [the U.S.-Russia relationship] is not about trust but about interests,” says Albats.

Or, as Biden put it in Geneva: “This is not about trust. This is about self-interest and verification of self-interest,” he said. “I verify first and then trust.” That is a deliberate reversal of the Russian proverb, “Trust but verify,” which Ronald Reagan famously used with Russian leader Mikhail Gorbachev.

And it accurately describes the entire White House summit strategy. No reset. No meals. No walks in the woods.

No joint press conference that could turn into a circus, with Russian media baiting the two presidents to toss barbs at each other. No unscripted riffs by a rogue president with scant knowledge of Russia.

True, each man complimented the other’s professionalism in public. But as Putin noted, “It certainly doesn’t imply that we looked into each other’s eyes and found a soul or swore eternal friendship.”

Yes, Putin’s Russia got acknowledged as a “great power.” (Putin’s neediness was revealed when he said, at his solo presser, “It’s not every world leader that gets this amount of attention.”)

Yet, the Russian leader’s lies were firmly debunked to the world by Biden in his press conference. The clear message to Moscow: Biden is not like Donald Trump, Putin’s patsy, who said he trusted Putin more than his own intelligence agencies at the 2018 Helsinki summit. This president won’t let Putin run rings around him.

As for substance, U.S. and Russian ambassadors will return to their posts, and working groups will be established on the critical issues of arms control and cyber.

But, again, Biden was no pushover, laying down red lines on cyber. He said he had handed the Russian leader a list of 16 examples of “critical infrastructure,” and made clear that if they were attacked, “we have significant cyber capabilities” and would respond “in a cyber way.”

“Well, how would you feel if ransomware took down the pipelines from your oil fields?” Biden said he told Putin. That’s a pretty clear hint.

In other words, the White House has no illusions that Putin will behave differently — in these critical areas, or on Ukraine, or Syria, or Afghanistan, or the fate of poisoned dissident Alexei Navalny, jailed under awful conditions.

But Putin has been offered a chance to play the global leader that may appeal to him. Take it and have a stable relationship with his American adversary. If he chooses instability, the White House will be prepared.

“Let’s see what happens,” said Biden, when pressed on the summit’s achievements. In the coming months, Putin will be tested, as will White House skills and firmness. Given Putin’s weaknesses, his interests may dictate compromise on issues of American concerns.

An important role of journalism is connecting people who need help with those who are able to provide it.

It’s different when it’s your home.

St. Louis Post-Dispatch: Democrats might be politically correct, but they're strategically wrong

Progressive activists might be politically correct, but they're strategically wrong

Chris Talgo: Abortion may be limited, but scare tactics are wrong

It has been just two weeks since Justice Samuel Alito’s draft opinion in the case of Dobbs v. Jackson Women’s Health Organization was leaked t…

A few weeks ago, my husband and I lost a friend to an opioid overdose. He was not the first person we knew who died from an overdose, but he w…

The best of intentions aren’t enough to turn a bad policy into a good one.

Jonah Goldberg: It’s not easy to predict US politics in a post-Roe world

The late Supreme Court Justice Ruth Bader Ginsburg was a passionate advocate for abortion rights, but she was also one of Roe v. Wade’s most e…

Esther J. Cepeda: 3 tips for Madison as I say goodbye

I’m not going to mince words about it, folks: I’m leaving town.