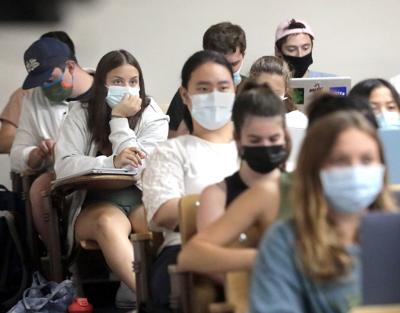 MILWAUKEE — As I reach the end of my Ph.D. at the Medical College of Wisconsin, nostalgia made me search my school inbox from the very start. It begins with emails going back and forth with my designated school official — a person who serves as a point of contact for international students.

I was telling this person I had no idea if my visa would be approved, or if I would make it to the United States from Brazil before the semester started.

A dual-intent visa is not new. Several employment visas already allow for it. Student visas do not.

But I did make it to Milwaukee, a day before orientation. I arrived with no apartment lease, no friends or an American bank account. For my first few weeks, I stayed in a rental and failed at juggling school assignments, research and a new life as an international graduate student. Later that semester, I would be diagnosed with adjustment disorder with anxiety.

It’s hardly a secret that graduate school is difficult. Lesser known are the uncertainties associated with being in the U.S. on a student visa. Most of my stress came from searching for housing and figuring out my finances. Those challenges could have been better handled with a simpler and more transparent process of getting a visa approved.

The key argument a student visa application needs to make is that the applicant has no plans to stay in the U.S. after graduating. In some cases, such as mine, that is a hard argument to make. I graduated with a bachelor’s degree from the University of South Florida in 2016 and now have a total of nine years of studies in the U.S. As a result, I have almost no significant ties to Brazil. In fact, the best document I could think of for my interview was my mom’s mortgage on our house back in Curitiba, Brazil.

Madison School District earns an ‘A,’ an ‘F,’ an incomplete and a tardy

I believe students who want to move to the U.S. and stay afterward should be able to do so. That is called a dual-intent visa, and it is not new. Several employment visas already allow for it. Student visas do not.

Opening up this avenue for students, as some drafts of the U.S. Citizenship Act of 2021 would do, could streamline and ease the life of hundreds of thousands of international students who either anxiously wait for their visas or get them denied every year — simply because they want to move to the U.S. after they finish school.

Arzua, from Curitiba, Brazil, is a Ph.D. candidate in neuroscience at the Medical College of Wisconsin in Milwaukee: www.thiagoarzua.com and @thiagoarzua. He wrote this for The Conversation.

Clarence Page: We need to talk about Black women getting abortions 4 times as often

Buffalo News: Speak out against lie of ‘replacement theory’

Editorial: 'Replacement theory' is a racist fabrication to exploit and amplify immigration fears

So it looks like they finally found their red line.

Jonah Goldberg: Trump’s goal is to solidify control over the GOP, not help it win elections

Sen. Ted Cruz of Texas said something interesting while campaigning for Dave McCormick, one of the contenders for the GOP nomination to replac…

No child should ever go hungry in the richest nation in the world. Yet in recent days, panicked parents and caretakers who rely on infant form…

Lynn Schmidt: Some leaders -- Zelenskyy, Cheney -- rise to the occasion

Something has been sorely missing in the United States in the last decade — soaring rhetoric. We are lacking leaders who, like Abraham Lincoln…