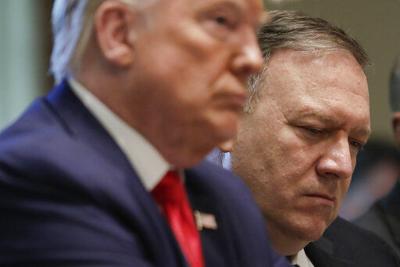 The Donald Trump presidency has entered a new and disturbing phase. As if an impeachment inquiry wasn’t enough, Trump keeps digging himself a deeper hole.

Abandoning allies as he cedes northern Syria to Turkey. Planning to host the Group of 7 meeting at his golf resort. Stonewalling the impeachment inquiry. Insulting the speaker of the House.

And then the president’s acting chief of staff essentially admits a quid pro quo with Ukraine — an issue key to the impeachment inquiry — and then later denies his admission.

What a month so far. And it seems to just keep getting worse as the president bombastically continues sowing fear and division, and further undercuts the nation’s role as a world leader.

We never expected contrition from Trump. But it seems he has become more reckless. These are trying times for the nation. How and when we will return to an era of calm is unknown.

His decision to ignore his military advisers and give the go-ahead to a Turkish invasion of Kurdish-held northern Syria has upended the political balance of the Middle East.

No one wants what Trump calls “endless wars.” But the limited troops we had in Syria were there to help maintain a fragile peace that protected the Kurds, our key ally in the fight against ISIS.

Now the president has kicked them to the curb, prompting the Kurds to form an alliance of necessity with Russian-backed Syrian President Bashar Assad; opened the door to a possible resurgence of ISIS; allowed Russia to quickly move troops into the area our troops vacated; strengthened Iran’s hand; and left our top ally in the region, Israel, on edge. To say nothing of the more than 200 civilians who have been killed and the more than 160,000 Kurds who have been uprooted.

Meanwhile, back in the United States, the Trump narrative that there was no quid pro quo in his relations with Ukraine President Volodymyr Zelenskiy continues to unravel. As more insiders ignore the president’s attempts to block congressional testimony, their statements leave a clearer picture of an administration putting Trump’s political ambitions ahead of the nation’s interest.

Then, a stunning moment came last week when acting Chief of Staff Mick Mulvaney, in a briefing with reporters, not only admitted a quid pro quo, but defiantly said that’s the way international affairs are conducted. “I have news for everybody, get over it,” he said. “There’s going to be political influence in foreign policy.”

Sure, politics is always part of foreign policy. But the political play is supposed to be to support the nation’s best interests, not to draw foreign influence into our elections — not to advance the president’s personal political agenda.

Nor should the president or his cronies financially benefit from foreign relations. Which brings us to the other outrage of the week: the president’s decision to host the G-7 meeting in 2020 at the Trump National Doral near Miami.

It shouldn’t surprise us that a president who invites foreign powers to hack and probe his political enemies would also run roughshod over the emoluments clause of the U.S. Constitution, which prohibits federal officeholders from receiving any gift, payment or other thing of value from a foreign state or its rulers.

Even if the hotel puts on the event “at cost,” as Mulvaney promised, the money is income and the publicity is priceless. Mulvaney said it was the president’s idea to host the meeting at his resort. It came up when White House officials were considering possible locations. “We sat around one night,” Mulvaney said. “We had the list, and he goes, ‘What about Doral?’ And it was like, that’s — that’s not the craziest idea.”

Yes it is. But it’s not the first one the president has come up with — and, sadly, it probably won’t be the last.

The old adage, "you get what you pay for" — aimed as a warning that doing things on the cheap doesn't always work out — applies to government as much as it does to individuals.

Now that two states bordering Wisconsin have recently legalized the recreational purchase and use of marijuana, it seems that perhaps Wisconsin needs to consider law changes related to driving under the influence of drugs, including marijuana.

Voting in the United States is a sacred right and, personally, I can't think of anything more despicable than those among us who would deny Americans that right.