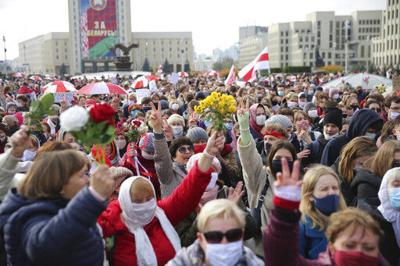 The incumbent, President Alexander Lukashenko, has been in power for 26 years. Sometimes called “the last dictator in Europe,” he has outlasted other strongmen in the former Soviet sphere, including those toppled in so-called color revolutions that swept through nations such as Ukraine, Georgia, Kyrgyzstan and Armenia. Lukashenko withstood an earlier round of massive protests in 2006, but this time seems different: Demonstrators outraged over economic stagnation and a cavalier response to the COVID-19 pandemic have flooded the streets of Minsk, the capital, to demand a peaceful transfer of power. Many of them support the human rights activist Svetlana Tikhanovskaya, who had challenged Lukashenko for the presidency.

It is a pity that this situation did not come up Thursday in the second and final presidential debate between President Donald Trump and former Vice President Joe Biden. The fate of the 9.5 million people in Belarus, a country whose area is nearly the size of Kansas, has huge implications for the security of both the European Union and the United States.

Belarus is considered one of Russia’s closest allies, but it would be a mistake to dismiss the country as a puppet state of Moscow and Lukashenko as a crony of Russia’s president, Vladimir Putin. Following Russia’s invasion of eastern Ukraine in 2014, Lukashenko began to rethink his ties to the Kremlin and to pursue engagement with both the West and China. In 2015, he freed political prisoners as a gesture of goodwill, and Washington and Brussels responded by easing sanctions. Lukashenko received visits from top Trump administration officialsin late 2019 and early 2020 as the countries moved toward normalizing relations. Over the summer, Belarus arrested suspected mercenaries working for a semiprivate Russian military contractor.

The country’s presidential campaign and election have put that progress in doubt. After the government jailed critics and at least one would-be challenger to Lukashenko, the incumbent was declared the winner with nearly 80% of the vote — a tally the European Council said was not credible. The international community has not recognized his reelection, and this month, the European Union and the United States Treasury Department imposed sanctions over the electoral fraud. Meanwhile, Lukashenko has turned to the Kremlin, and Putin has announced the possibility of constitutional changes and new elections — presumably under Russian influence. ...

The situation remains at a dangerous stalemate. Western diplomats fear a “soft annexation” of Belarus by Russia. In April, the Trump administration nominated a career diplomat, Julie D. Fisher, to serve as ambassador to Minsk — she would be the first since 2008 — but some senators now fear that confirming her would be seen as legitimizing Lukashenko’s crackdown. It would not. Washington should confirm a new ambassador, and that envoy should engage with the government while actively reaching out to the opposition.

It would be myopic to view the Belarus crisis simply through the lens of the West’s deteriorating relationship with Russia. “A post-Lukashenko Belarus, with close ties to Moscow but an improved relationship with the West, remains a possible medium-term outcome of the current crisis,” Yauheni Preiherman, the founder and director the Minsk Dialogue Council on International Relations, argued persuasively in Foreign Affairs. “It might not be the one many in the West had hoped for, but it is still a good alternative and perhaps the best option in the current climate.”

The people of Belarus have been undergoing a societal awakening, with a broad-based protest movement insisting on free and fair elections. Western leaders should lend their support to the opposition and demand a democratic transition, an end to violent repression, the lifting of restrictions on the press and the release of political prisoners. Trade sanctions, asset freezes and the promise of economic incentives in the event of a democratic transition are all tools that are available to Washington and Brussels. Western leaders should also offer strong support for Tikhanovskaya and the courageous advocates who have risked their lives and safety to demand political rights.

No one wants Russia to intervene militarily in Belarus, as it has done in Georgia and Ukraine, so the situation is extremely sensitive. The goal is a peaceful democratic transition, but the risk is that United States and European involvement will inflame Russian fears or spark a geopolitical crisis. It will require careful diplomacy — best undertaken by, we hope, a Biden administration that will challenge Putin, as Trump has bizarrely failed to do.

Plain Talk: Sedition from the Wisconsin statehouse to Capitol Hill

"If any of these so-called leaders had any principles at all, they'd resign and go home in shame."

"The report violates key tenets of social science research, including rigorous research design and faithful reporting of the full results of empirical analysis."