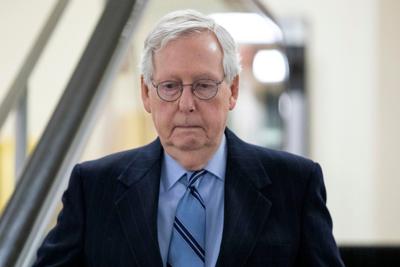 The 44th president was into his second term before some psychic switch seemed to click and he finally realized what had long been obvious to everyone else. Namely, that the Republican Party had zero interest in bipartisanship and, for that matter, no priority larger than demonizing him and frustrating his agenda. Not that Obama ever made a big deal out of it. But as more than one observer noted, he spent less time in his last four years seeking Republican buy-in.

Who could blame him? How many times can one reach out an open hand and draw back a bloody stump?

Congress must defuse the 2024 'time bomb'

By that standard, it might be argued that President Joe Biden is a fast learner. He’s figured out in one year what took Obama four. Still, his announcement of same in his marathon news conference was hardly gratifying. “I did not anticipate,” he told reporters, “that there’d be such a stalwart effort to make sure that the most important thing was that President Biden didn’t get anything done. Think about this: What are Republicans for? What are they for?”

He did not “anticipate” it? Seriously? He didn’t know this was coming? Where has Biden been the last decade and a half? What has he seen that made him think Republicans had the slightest interest in statesmanship?

As to what they stand for, that’s simple. They stand for ending access to abortion. They stand for unfettered access to guns. And they stand for exploiting whatever random flotsam of the so-called culture war — from critical race theory to COVID masks to the “War on Christmas” to an old book by Dr. Seuss — can be inflated into an existential threat to stampede their easily stampede-able base to the polls. And that’s about it.

One seldom hears Republican leaders argue for policy prescriptions anymore or engage in substantive debate on substantive topics. But they fall all over themselves to weigh in on “critical race theory” and other subjects guaranteed to get cable TV host Tucker Carlson’s audience all het up.

Note that the GOP didn’t bother to write a platform for the last presidential election and has announced plans to skip debates for the next. Why bother? The party is no longer a party, but a fascist, white-nationalist cult less interested in crafting policy than in amassing power for its own sake and by any means necessary. Its canine submission to that two-legged embarrassment, Donald Trump, and its minimizing an act of violent sedition, prove this irrefutably.

One is happy to see Biden call them out, something he’s been doing more frequently. One hopes he continues to channel his inner Harry Truman (“Give ‘em hell, Harry!” became the unofficial slogan of his 1948 presidential campaign as Truman barnstormed the country, railing against a “do-nothing” Republican Congress). This would be useful both to highlight the GOP’s moral failings and to rally his own base. Democrats could certainly use some rallying. They will be understandably dispirited after a recent Senate vote doomed — at least for now — urgently needed election reform.

That said, it is past time — by almost 15 years and counting — for Biden and other Democrats to disabuse themselves of the naive notion that the other party still has any interest in helping them govern. If democracy is to be saved, it will be done not with the Republican Party, but despite it. Failure to understand that and strategize accordingly wastes time America does not have. The GOP’s behavior should leave us feeling disappointed, yes.

But not a bit surprised.

Buffalo News: Speak out against lie of ‘replacement theory’

Editorial: 'Replacement theory' is a racist fabrication to exploit and amplify immigration fears

An important role of journalism is connecting people who need help with those who are able to provide it.

It’s different when it’s your home.

St. Louis Post-Dispatch: Democrats might be politically correct, but they're strategically wrong

Progressive activists might be politically correct, but they're strategically wrong

Chris Talgo: Abortion may be limited, but scare tactics are wrong

It has been just two weeks since Justice Samuel Alito’s draft opinion in the case of Dobbs v. Jackson Women’s Health Organization was leaked t…

The best of intentions aren’t enough to turn a bad policy into a good one.

A few weeks ago, my husband and I lost a friend to an opioid overdose. He was not the first person we knew who died from an overdose, but he w…

Kansas City Star: Can a cartoon character turn you LGBTQ?

It’s becoming clearer by the day that the Republican Party is betting that animus toward LGBTQ Americans is a big winner this election year. N…