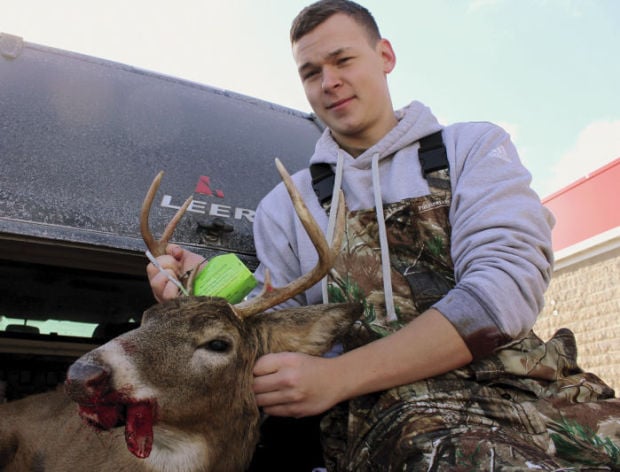 Aaron Miles bagged a six-point buck while hunting on opening day, Saturday, Nov. 23 of the nine-day gun deer season. Miles braved the cold temperatures, which wildlife officials said may have contributed to a lower two-day harvest than last year. 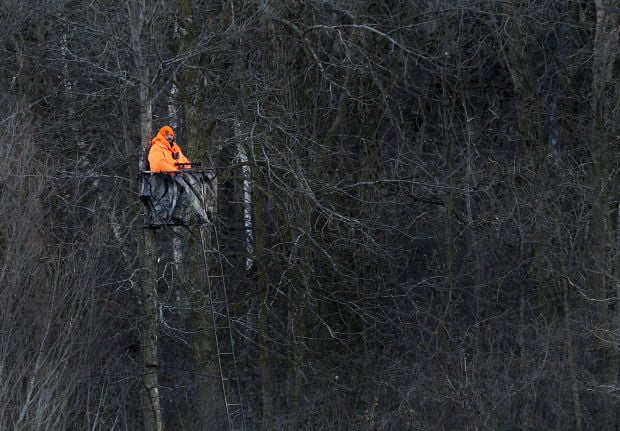 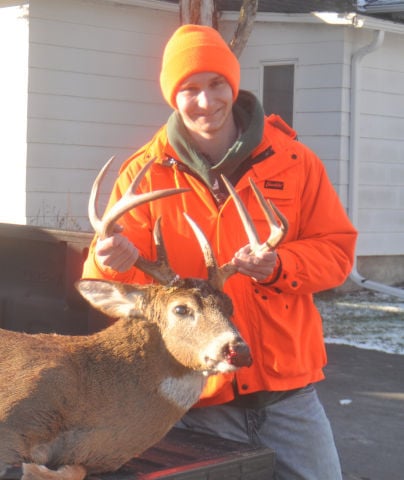 Matt Dietzman of Tomah shot an eight-point during the second day of the gun-deer season.

Aaron Miles saw 10 deer on opening day of the gun season before he decided it was time to bag one and go home.

“I decided I was getting cold, so it was time for something to get shot,” said Miles, who was hunting in western Jackson County when he got his six-pointer.

Hunters braved the icy temperatures on opening weekend of Wisconsin’s nine-day gun deer season, but they came home with fewer deer than they did during last year’s two-day span.

Though hunters define success in different ways, 110,298 deer were successfully taken and registered Wisconsin during the opening weekend. The tally is based on preliminary call-in numbers collected from registration stations by Department of Natural Resources staff.

“You can’t blame people. It was cold. A lot of hard-core hunters that would normally sit all day — you just couldn’t do it this year,” said Kevin Wallenfang, DNR big game ecologist who is based in Madison. “It was brutal out there.”

The biggest drop came in the number of bucks harvested, a 2 percent dip compared with 2012. Hunters killed 71,989 bucks during the opening weekend in 2012 but just 53,865 this past weekend. The biggest declines were in northern Wisconsin. The drop in Iron County was 61 percent, 47 percent in Florence County and 43 percent in Douglas County.

People can check out the preliminary numbers at http://dnr.wi.gov/files/pdf/Opening_weekend_harvest_2013.pdf.

“Congratulations to all hunters who endured the cold and were able to harvest a deer opening weekend of the nine-day. Though getting a deer is often the ultimate goal, it’s the whole experience of spending time with friends and family, engaging in the traditions, and getting outdoors that makes the hunt so fun, even if a deer is not brought home,” said DNR Secretary Cathy Stepp. “I hope those that weren’t able to get a deer during the season opener will get back out there and enjoy the rest of the days of the season.”

“We saw quite a few new hunters taking part in the traditions this year, with females representing 33 percent of resident First Time Gun Deer licenses sold. With the extremely cold temperatures opening weekend, many of these new hunters had quite the initiation. This makes me even more proud of the stories and the photos being shared with us, showing them having fun whether they got a deer or not.”

Most people blamed the weather for the lower rate of success.

“It’s always variable. Once we saw the weather forecast, and we knew it was a late (gun deer season) opener, you kind of assume it wasn’t going to go up a whole lot,” said DNR wildlife biologist Scott Roepke. “It’s probably in most part due to the weather and the late timing of the season.

“A noon Packers game (on Sunday) always pulls people out of the woods, too.”

The DNR said before the season started that the deer population is the highest in 2013 than its been since 2008.

Wallenfang added: “The people that I talked to this weekend — granted a lot of them had deer — but they seemed to be pretty happy with the number of deer they saw. Despite the cold weather, they were enthusiastic.”

Some factors, such as little to no mating activity and remaining corn in fields, contributed to the two-day drop in registrations.

The remaining corn in particular gave way to many more hiding opportunities for deer than in a typical season, Roepke said.

“That gives a lot more hiding opportunities, and hunters don’t really access corn unless they’re doing a drive through it,” he said. “There’s still a fair amount of corn up in the western part of the county.”

Black River Falls’ Tim Luther called it a day after he bagged a buck in private land in the town of Albion about 7:30 a.m. Saturday after a short time in the woods.

He immediately said his experience was “cold” and one of the coldest opening days he remembered.

“It went good. I’m happy,” said Luther, who registered his deer at 4 Seasons Quick Stop. “I got food.”

The cold conditions also led Ryan Stubrud of Alma Center to take a break from his three-hour stint in the woods without a deer and come to 4 Seasons for a cup of coffee.

He said it was “colder than normal” but said he didn’t really mind if he didn’t bag a deer when he returned to an area near Pine Creek.

Hunting is more about relationships with family and friends these days, he said.

The hunt continues through Sunday, and Roepke said hunters should see success if they get out into the woods.

Weather conditions are anticipated to improve over the holiday week, he said.

“If we have decent weather and folks get out there, they could still have a pretty good season around here,” Roepke said. “There’s still plenty of opportunity to get deer.”

Even if people don't get their deer this week, several seasons follow.

Outdoors: History of the deer hunt in Wisconsin

Wisconsin has a long and storied tradition of regulated gun deer hunting stretching all the way back to 1851.

Aaron Miles bagged a six-point buck while hunting on opening day, Saturday, Nov. 23 of the nine-day gun deer season. Miles braved the cold temperatures, which wildlife officials said may have contributed to a lower two-day harvest than last year.

Matt Dietzman of Tomah shot an eight-point during the second day of the gun-deer season.