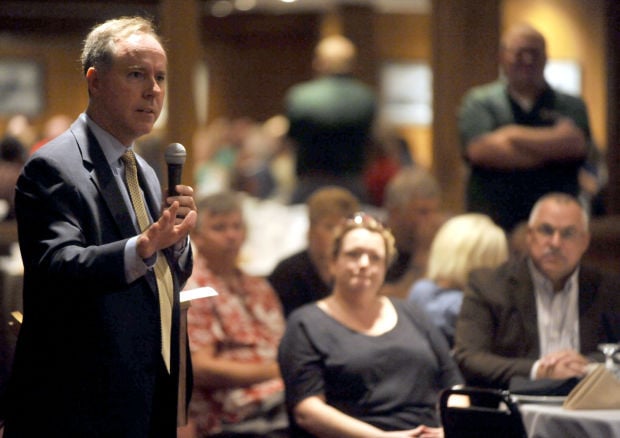 Assembly Speaker Robin Vos, R-Rochester, speaks in August in Racine at an event sponsored by Americans for Prosperity, a conservative advocacy group. Vos and other key state lawmakers have dodged calls from across the state for a public hearing on redistricting reform. 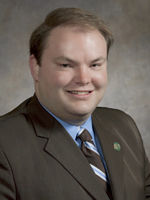 Should barbers be allowed to dye, tint and color hair in Wisconsin?

Rep. Tyler August held a public hearing on the question this month at the state Capitol.

Yet the chairman of the state Committee on Government Operations and State Licensing is still refusing to hold a public hearing on redistricting reform — an issue of much larger consequence.

In fact, Wisconsin’s rigged process for redrawing congressional and legislative districts is a root cause of Washington gridlock, which has given us the federal government partial shutdown and the scary possibility of a debt default this week.

With so many incumbents from both major political parties entrenched in voting districts drawn to protect them, they have little reason to cooperate and get things done. That’s true in Wisconsin and across the country.

August, R-Lake Geneva, has been a lawmaker for less than three years. Yet he’s already part of Assembly Speaker Robin Vos’ leadership team.

That raises the question: Did Vos tell August not to schedule a public hearing on Assembly Bill 185, the redistricting reform bill assigned to August’s committee?

“I have not told him to not have a hearing,” Vos responded when asked this question by WisconsinEye senior producer Steve Walters. “I don’t think he should. I don’t think there’s a need for it. I think we’re pretty clear constitutionally that Wisconsin’s constitution says the Legislature shall apportion the districts.”

Newspaper editorial boards across the state, good government groups and a slew of State Journal readers have been calling for a public hearing on AB 185 and its Senate version, SB 163, for weeks.

It’s one thing for top lawmakers to oppose legislation. It’s quite another to refuse an open discussion. Vos and August’s argument against nonpartisan redistricting must be awfully weak if it can’t withstand a little scrutiny.

A public hearing would give Vos and August a chance to explain their opposition. So far, they’ve offered little but lame excuses for inaction.

AB 185 wouldn’t stop the Legislature from approving new voting district maps after each major census, as the constitution requires. It would simply assign the task of drawing the lines to a nonpartisan state agency, the Legislative Reference Bureau, which has long been trusted by Republicans and Democrats for its neutrality in drafting bills.

The LRB would have to follow strict guidelines requiring voting districts to be as compact as possible. The LRB would be forbidden from considering where lawmakers live when drawing the maps as well as broader political implications.

Iowa has used this efficient and fair model for decades. The result is more competition, less protection for incumbents, and virtually no cost. Unlike Iowa, Wisconsin taxpayers had to pay millions in legal bills defending gerrymandering.

If Vos has sincere objections to AB 185, those can be fleshed out at a public hearing. So can Vos’ suggestion that Wisconsin has healthy competition for its legislative and congressional seats.

On WisconsinEye, Vos cited the 2010 election of Republican Joe Knilans in the Democratic-leaning city of Janesville as evidence strong candidates can win anywhere. But Knilans beat an incumbent who was in the midst of a scandal. And Knilans lost his Assembly seat the very next election.

Vos also stressed that Democrats, when they controlled the Legislature, failed to advance redistricting reform. That’s absolutely true. But since when are the Democrats Vos’ standard for excellence?

It’s time to rise above the partisan games and fix this fundamental process for future generations of voters in Wisconsin. The best way to determine if AB 185 is the solution is a public hearing.

Assembly Speaker Robin Vos, R-Rochester, speaks in August in Racine at an event sponsored by Americans for Prosperity, a conservative advocacy group. Vos and other key state lawmakers have dodged calls from across the state for a public hearing on redistricting reform.