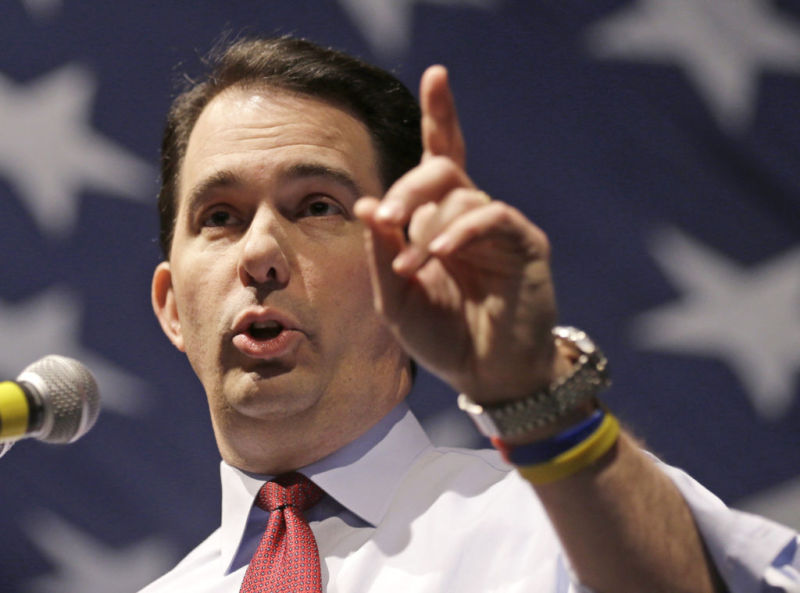 In last week's Marquette poll, a majority of respondents said they did not think Gov. Scott Walker could handle his duties and run for president at the same time. 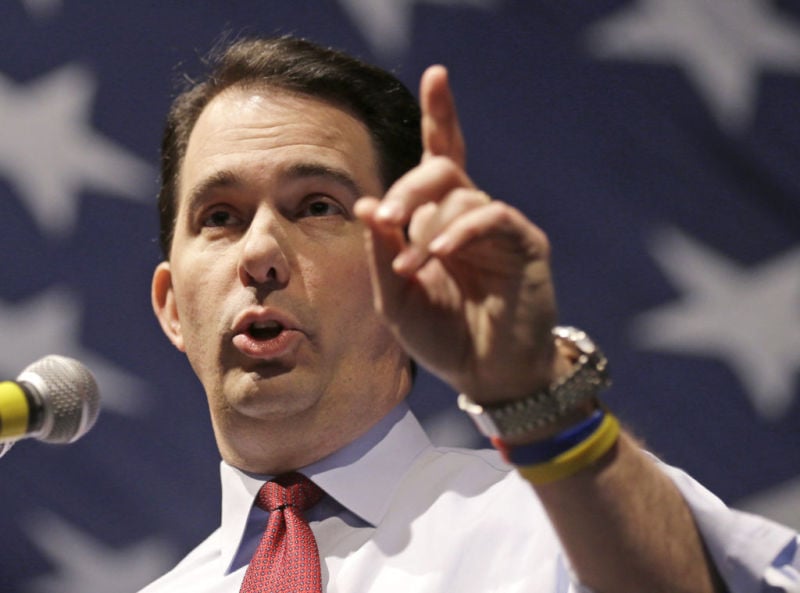 Gov. Scott Walker's administration is looking at self-insuring more than 200,000 state workers and family members, which would be a switch from a competitive HMO model in place since 1984. 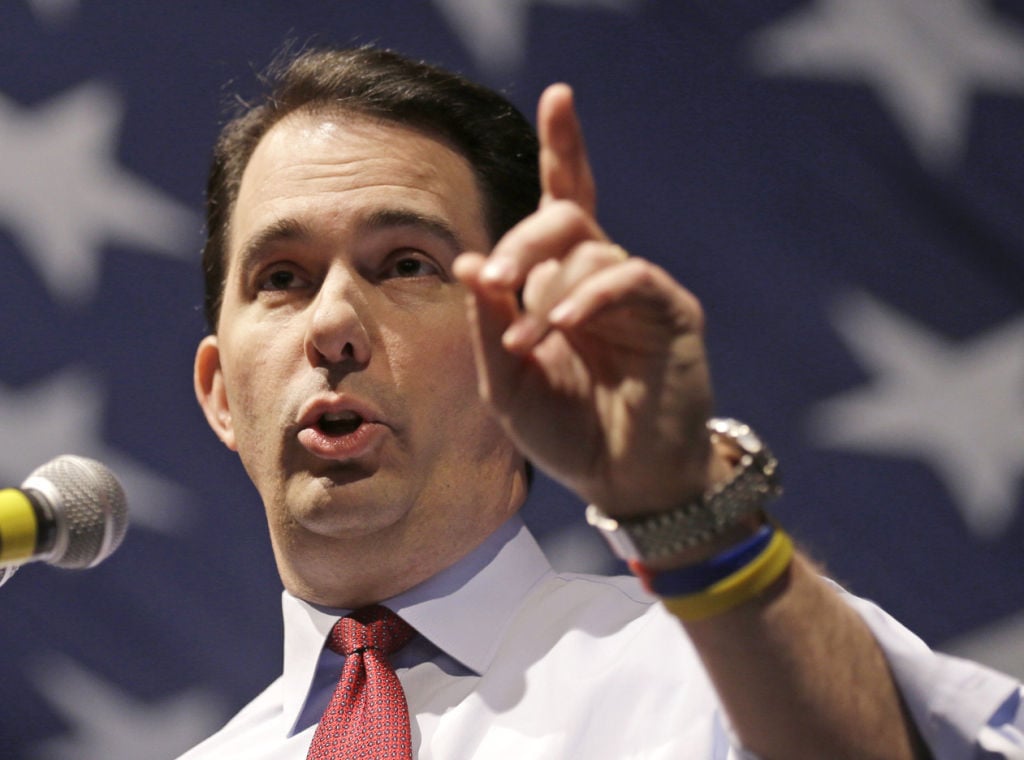 Scott Walker is running for president. Everyone knows that.

No, Walker has not formally announced his candidacy for the 2016 Republican presidential nomination. But he is so obviously a contender that his name is now regularly included with those of other Republican prospects — even if he remains stuck in the same single-digit territory as former Pennsylvania Sen. Rick Santorum and Louisiana Gov. Bobby Jindal. And that’s not all:

• The Washington Post refers to Walker as “the 2016 dark horse GOP candidate.”

• National Journal explains that Walkers is “poised to be the sleeper Republican presidential candidate of 2016.”

• Walker has written a 2016 campaign book, "Unintimidated: A Governor's Story and a Nation's Challenge," which Glenn Beck’s The Blaze refers to as “the prototypical book about someone running for president who doesn’t want to come out and actually say that he is running for president.”

• Walker has flown to Las Vegas — along with fellow 2016 prospects such as Jeb Brush — to audition for GOP mega-donors at an event dubbed “the Sheldon Adelson primary.”

• Walker has last year’s man in the spotlight, New Jersey Gov. Chris Christie, singing his praises in Time magazine, while conservative pundits spin fantasies about how the Wisconsinite is ready to fill the void created by Christie’s fall from grace.

• Walker even talks about who he would like to appoint to the U.S. Supreme Court, telling a meeting of the conservative Federalist Society in Washington that he would be “inclined” to name U.S. Court of Appeals Judge Diane Sykes.

So, yes, Scott Walker is running for president. And, yes, everyone knows that.

But there’s a problem with the “everyone knows that” part of the equation.

Wisconsinites know it. And they are not amused by the prospect that their governor seems to be running for re-election in 2014 not because he is excited about serving another term as the state’s chief executive but as part of his grand plan for seeking the presidency in 2016.

This provides some of the explanation for why Walker finds himself tied with Democratic challenger Mary Burke in the latest Marquette Law School Poll. The survey says that both Walker and Burke are at 46 percent, despite the fact that 51 percent of the Wisconsinites who were surveyed admitted that they knew too little about Burke to form a favorable or unfavorable opinion of her.

A remarkable 67 percent of Wisconsinites say they do not want Walker to run for the presidency. That message is coming not just from partisan Democrats and swing-voter independents. Almost 40 percent of Republicans are opposed to the idea.

But the “don’t want him to run” number is not the most telling one in the survey.

The most telling number comes in answer to the next question: “Do you think any governor can run for president and still handle their duties as governor?”

Sixty-five percent of Wisconsinites answered “no.” The negative response was overwhelming: 74 percent of Democrats say the balance cannot be struck, as do 66 percent of independents and 52 percent — yes, a majority — of Republicans.

This is a serious issue for Walker.

The governor already suffers from an empathy gap. Voters — even voters who agree with him on major issues — question whether he has much interest in them. When asked whether “Scott Walker is someone who cares about people like me,” only 44 percent of Wisconsinites interviewed for the Marquette poll said “yes.” Fifty-two percent said “no.”

Wisconsin has a very strong governorship — too strong, in many senses. The governor is the dominant player in state politics, overshadowing other elected officials. That’s a blessing when it comes to advancing an agenda and grabbing headlines. But it is a curse when it comes to expectations. Governors can’t make excuses — and they can’t foster the fantasy that it is possible to meet the responsibilities of so powerful and so high-profile a position while gallivanting around Iowa and New Hampshire.

So, now, Scott Walker finds himself in a difficult spot.

He is running for president.

Everyone in the GOP knows that.

Everyone in Wisconsin knows that.

Wisconsinites don’t think Walker can serve as governor and campaign for the 2016 Republican presidential nomination at the same time.

And, as the Marquette poll numbers pointing to a close Walker/Burke race suggest, it is conceivable that the voters of Wisconsin might choose in November to replace Walker with someone who wants nothing more than to be the governor of Wisconsin.

John Nichols is associate editor of The Capital Times. jnichols@madison.com and @NicholsUprising

US: Chemical plant fire prompts evacuation of nearby residents in Northern Illinois

US: Chemical plant fire prompts evacuation of nearby residents in Northern Illinois

In last week's Marquette poll, a majority of respondents said they did not think Gov. Scott Walker could handle his duties and run for president at the same time.

Gov. Scott Walker's administration is looking at self-insuring more than 200,000 state workers and family members, which would be a switch from a competitive HMO model in place since 1984.