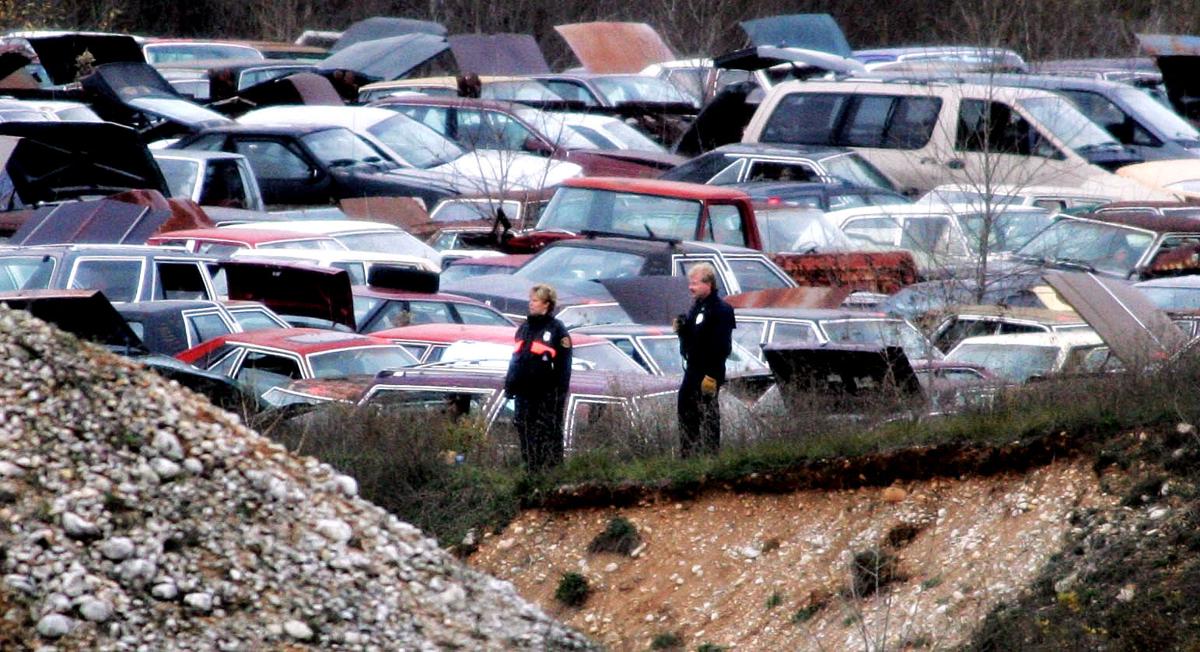 Police officers stand guard at Avery's Salvage Yard near Mishicot on Nov. 10, 2005, about an hour before police announced that they had found bones and blood on the property while searching for Teresa Halbach. 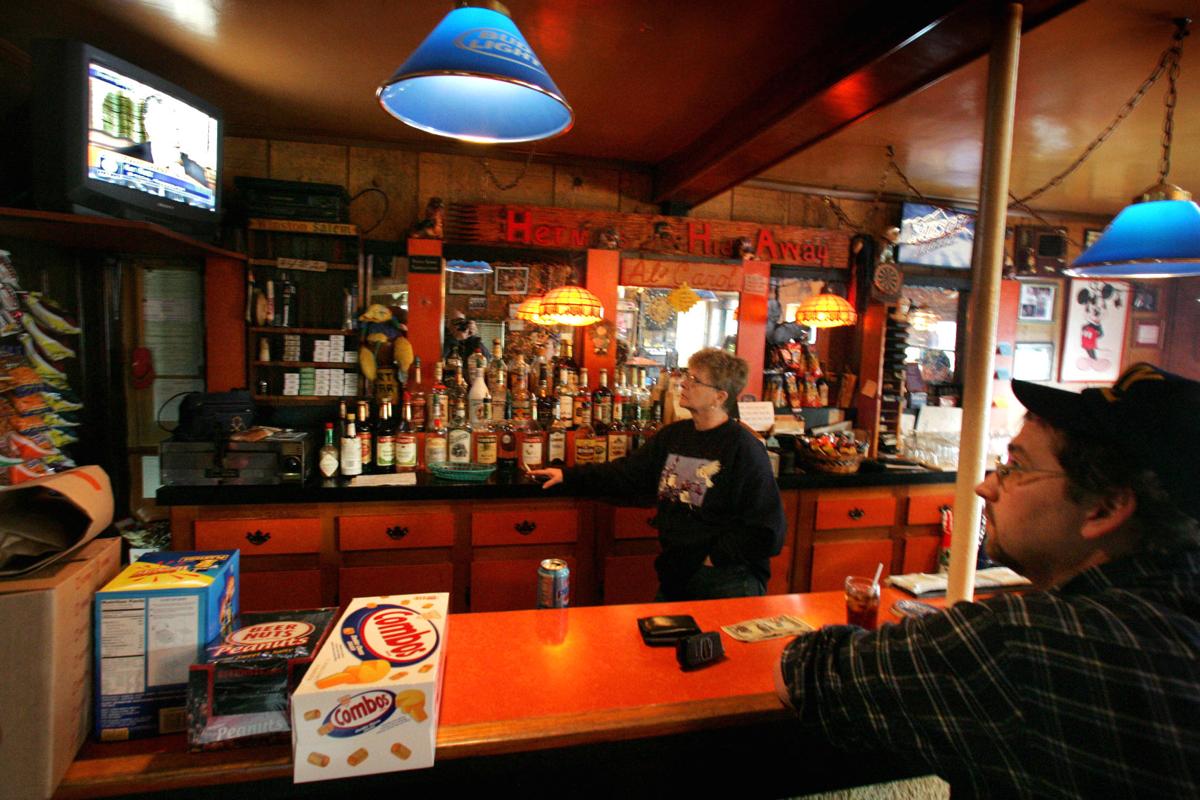 Mary Koller, left, and Mike Peroutka at Hermit's HideAway near Mishicot, watch a live press conference announcing the finding of blood and human bone evidence less than a mile from the tavern on Nov. 10, 2005. Police and volunteer searchers have combed the area since Teresa Halbach disappeared Oct. 31.

MISHICOT -- Jim Bydalek was taking his grandson to kindergarten early last week when he drove by dozens of people walking shoulder to shoulder in a farm field.

The little boy asked what was going on, and, in answering, Bydalek said it hit him how much life had changed in the village of 1,400.

"I just didn't think I'd ever have to explain to my grandchild why people were searching for a missing woman," said Bydalek, 55, village clerk in Mishicot for the last 29 years.

As the week wore on, the news turned grisly, pushing the community onto national news shows and leaving residents confounded.

The missing woman, Teresa Halbach, 25, had been on a freelance photo assignment Oct. 31 at Avery's Salvage Yard about three miles west of Mishicot. Her sport utility vehicle was discovered concealed at the salvage yard, and significant amounts of blood were found in the vehicle and around the property, police said.

By Thursday, police had revealed that the burned remains of an adult woman were found on the property.

"I watch all those detective shows on TV, and that's what it seemed like," said Mary Behrmann, 35, a cook in Mishicot, a rural community about 35 miles southeast of Green Bay. "It seemed like something off TV, not something down the road."

As suspicion centered more and more on Steven Avery -- one of several Avery family members who live at the salvage yard -- neighbors didn't know whether to be relieved by the apparent resolution of the case or sickened by their familiarity with the alleged killer.

"You hope it's not one of the Averys, because they're local people, but then you kind of hope it is a local person because if it's not, where are they going to look?" said Nettie Wavrunek, 37, a Mishicot bartender.

Friday, Calumet County District Attorney Ken Kratz said he would be charging Steven Avery, 43, with Halbach's murder, possibly as early as Monday. Avery's blood was found in Halbach's SUV, and the vehicle's ignition key was found hidden in Avery's bedroom with Avery's DNA on it, Kratz said.

In an irony that seems to ensure the case's infamy, Avery had been freed from prison in 2003 on DNA evidence after prosecutors determined he had been wrongly imprisoned for 18 years on a rape charge.

"This is a terrible thing to have unfold in your backyard," said Richard Hornak, 52, chairman of the town of Gibson, where the salvage yard is located. "To make headlines for something so despicable is not the kind of publicity you want."

Avery's Salvage Yard looks like a Hollywood movie set for a murder mystery.

Avery lives on the property, as do his parents and at least one brother and one sister. Neighbors say family members kept largely to themselves.

"They're kind of isolated. They don't really take part in town functions," said Hornak, adding that the town has not had any problems with the way the family operates its business.

Residents describe the Avery family as hard working and a little rough around the edges.

"Everyone who works in a junkyard seems to be a little greasy and grimy, and they're a little more to that end of the spectrum," said Erich Ziller, 65, of Mishicot.

Although Avery's exoneration two years ago could have made him a minor celebrity, residents say that didn't happen. They saw more of him during occasional television interviews than in person.

"He kind of was on his own," said John Campion, 49, owner of Chiller's Pub in Mishicot.

Before his erroneous rape incarceration in 1985, he was convicted of two felony burglary charges and a charge of endangering a person's safety for forcing the wife of a Manitowoc County sheriff's deputy off the road and pointing a rifle at her.

In 1982, police say, he poured gas and oil on a cat, threw it in a bonfire and watched it die. He was convicted of animal cruelty.

Few neighbors knew about the convictions until news reports this week.

"When they brought out the fact that he lit a cat on fire, I think that's when people started to turn against him," said Chris Avery, 57, whose husband, Arlen, is Steven Avery's uncle.

Chris Avery said she stopped going out in public Thursday because of questions swirling around the family. "It's almost hard to put your face out there."

Bernard Shedal, 71, a retired meat cutter, has lived near the Avery family for almost 50 years. He speaks highly of Steven Avery's parents but said he doesn't know the children well.

His wife, Pat, 67, said she was so saddened by Friday's news she went to bed without doing her usual crocheting.

"My chest hurts. My whole body aches," she said Saturday. "That girl must have really suffered."

She said she walks often on the country roads near the salvage yard. "He could have got me, but he probably wouldn't want an old lady like me."

Other neighbors said they are locking their doors more now.

"This really makes you start to think about who your neighbors are," said John Zellner, a town supervisor.

1982: Convicted of animal cruelty for throwing a cat into a bonfire.

1985: Convicted of endangering a person's safety for forcing the wife of a sheriff's deputy off the road and pointing a rifle at her.

1986: Sentenced to 32 years in prison for attempted murder and rape in the case of a 36-year-old Manitowoc woman who was badly beaten and sexually assaulted while jogging.

2003: Released from prison after new DNA testing -- requested by the Wisconsin Innocence Project -- showed he did not commit the rape and attempted murder. He later becomes an advocate of criminal justice reform.

Nov. 9: Avery arrested on charge of being a felon in possession of firearms. He remains jailed on that charge.

Nov. 11: Calumet County District Attorney Ken Kratz says he plans to charge Avery with the murder of Halbach. Kratz said that Avery's DNA was found on the ignition key of her vehicle, and that her vehicle had blood from both her and Avery in it.

The popularity of the Netflix series "Making A Murderer" has created new interest in the case of Steven Avery, the Manitowoc man wrongly incar…

The needed swing states to win the 2020 election

Police officers stand guard at Avery's Salvage Yard near Mishicot on Nov. 10, 2005, about an hour before police announced that they had found bones and blood on the property while searching for Teresa Halbach.

Mary Koller, left, and Mike Peroutka at Hermit's HideAway near Mishicot, watch a live press conference announcing the finding of blood and human bone evidence less than a mile from the tavern on Nov. 10, 2005. Police and volunteer searchers have combed the area since Teresa Halbach disappeared Oct. 31.