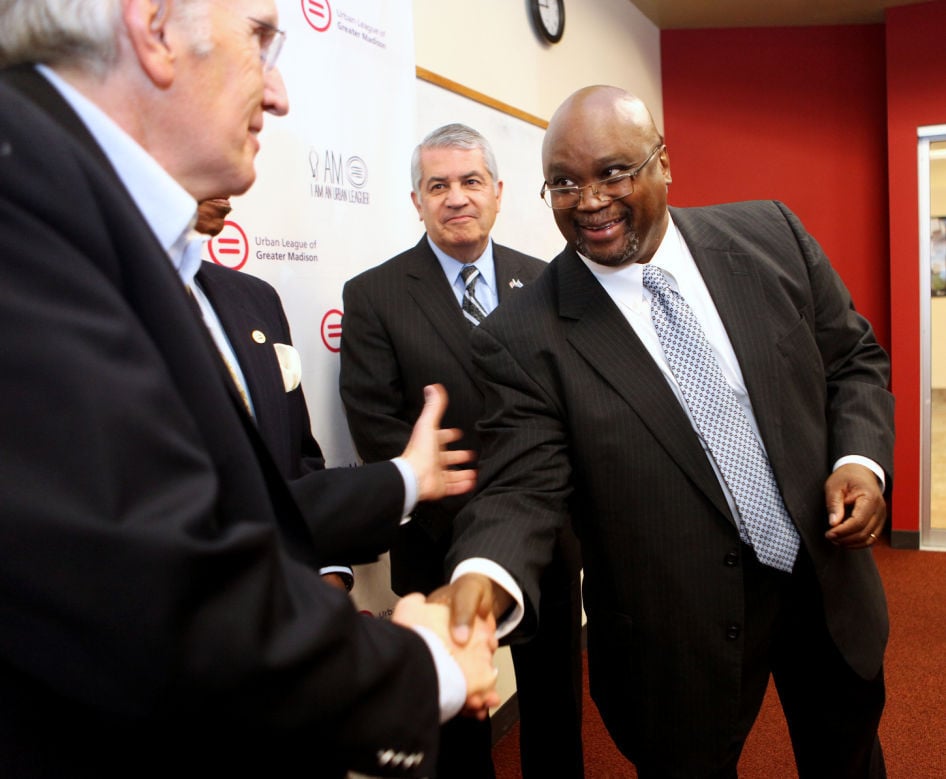 Ruben Anthony, right, shakes hands with board members after being announced as the new CEO of the Urban League of Greater Madison in March. Anthony will speak Thursday at an economic development summit aimed at improving workforce diversity in Wisconsin. 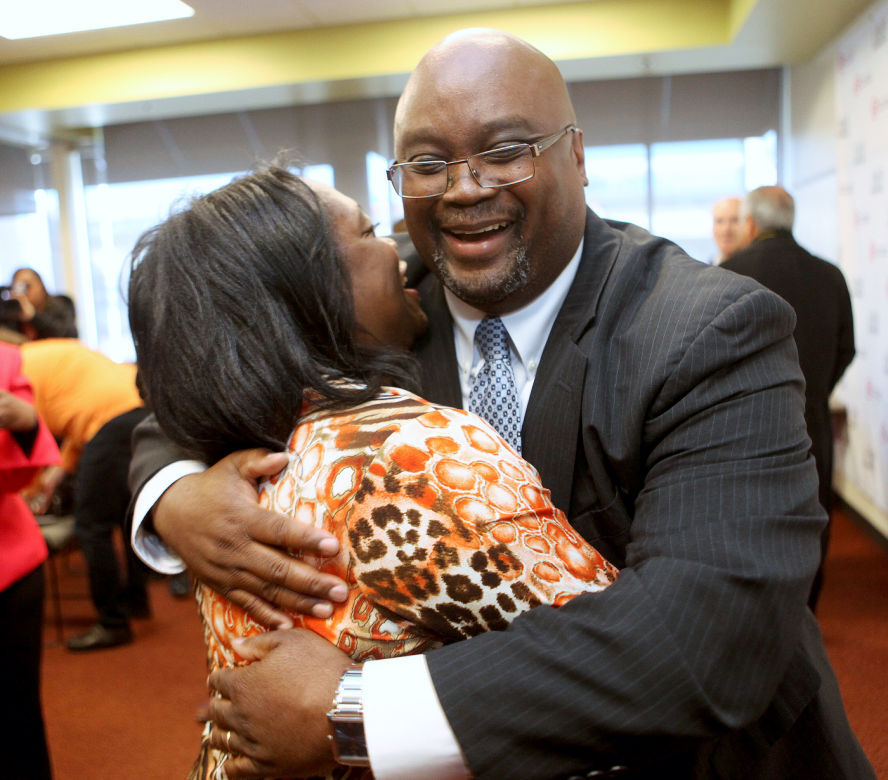 Ruben Anthony, right, receives a hug from Sheri Carter after he was named head of the Madison Urban League Friday. Carter is a running for Madison City Council District 14 in the April 7 election.

Ruben Anthony, who was named the new CEO of the Urban League of Greater Madison Friday, said the recent killing of an unarmed black teenager by a white police officer has put the city “at a critical crossroads.”

Anthony, 52, said that the "tragic" March 6 killing of Tony Robinson and ongoing racial disparities that have fueled mass protests in its wake have opened divisions in the Madison community.

"And the racial disparities in housing, education and incarceration have caused some shock and have caused some awe. We have a lot of work to restore trust in this community, and I know this community is up for the challenge," Anthony said during a brief, packed ceremony announcing his hiring at the Urban League headquarters on South Park Street.

“We’re at a place where we need to pull together. It’s been a challenge for us all,” he said in a later interview.

Anthony, who has a long professional history in management and business, was selected after a national search that lasted nearly a year, Nia Trammell, chair of the Urban League’s executive board, told the crowd.

“This is a time for strong leadership in our community, and Dr. Anthony is up to the challenge,” Trammel said.

Anthony, who holds a Ph.D. in urban studies and community development, founded RowJAC Consulting, a civil rights compliance firm, in 2013. He also was a disadvantaged business enterprise adviser to Milwaukee County, Milwaukee Sewerage District, the Minnesota Department of Transportation and the Dulles Airport in Washington D.C. Anthony also worked 19 years as a manager with the Wisconsin Department of Transportation, ending his career with the state as the deputy secretary overseeing 3,600 employees and a budget of more than $3.25 billion. He and his wife live in Madison.

It is Anthony’s management experience that made him a particularly strong candidate to become Urban League CEO, Trammell said.

“In addition to that, he’s got great community connections, so he’s going to come in and hit the ground running. We’re really excited to have him,” she said.

Anthony on Friday pointed to the Urban League’s traditional focus of economic development in the black community as a continuing area of emphasis.

“We have a goal of creating a bunch of jobs here – and that’s one my passions, creating sustainable jobs and giving disadvantaged workers access to opportunities,” he said.

Anthony said that he looked forward to working with community partners on job creation as well as programs to support academic achievement by children and youth, where cultural sensitivity and tolerance are key to success.

“Madison is a great community because of our diversity,” he said, adding that there are two narratives of life in the community. "One speaks to racial disparities and the other speaks to Madison being the best place to live in the country. I'm optimistic Madison can be the best place for us all to live."

As an urban planner, Anthony said, he looks forward to working to build community. ”Some of the best things I’ve done in career has been working with the community and opening up opportunities for those in the community. This is a wonderful opportunity for me. I feel blessed to have the opportunity to serve through the Urban League,” he said.

Anthony will assume his duties on April 6 and serve at the pleasure of the ULGM board of directors.

The Urban League of Greater Madison and the Madison Region Economic Partnership are co-hosting the annual summit at Monona Terrace.

The Urban League of Greater Madison announced Dr. Ruben Anthony as its new Chief Executive Officer at a news conference on Friday.

Ruben Anthony, right, shakes hands with board members after being announced as the new CEO of the Urban League of Greater Madison in March. Anthony will speak Thursday at an economic development summit aimed at improving workforce diversity in Wisconsin.

Ruben Anthony, right, receives a hug from Sheri Carter after he was named head of the Madison Urban League Friday. Carter is a running for Madison City Council District 14 in the April 7 election.