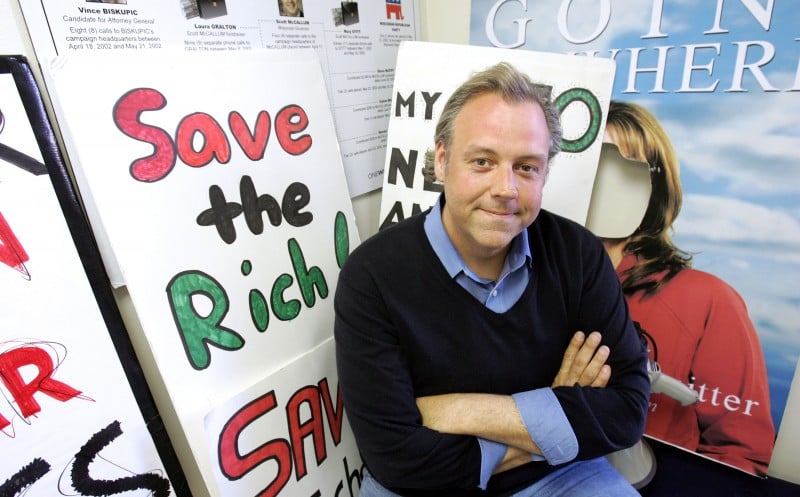 A lawsuit accusing the Madison School Board of engaging in illegal collective bargaining to the detriment of children and taxpayers was filed by a Milwaukee-based conservative legal group that is a “front” for Gov. Scott Walker, says the director of a Madison progressive advocacy group.

“It is absolutely politically motivated,” said Scot Ross, executive director of One Wisconsin Now. And it doesn’t matter that the lawsuit does not call out school board member Mary Burke — Walker’s opponent in the November election — by name, Ross says.

“This is the entity on which Burke serves,” Ross says. “Just last week, Walker started talking about Madison not taking advantage of the ‘tools’ of Act 10, then suddenly we have a lawsuit paid for by a foundation run by Walker’s campaign co-chair.”

On Sept. 3, Walker accused Burke of not harnessing the money-saving potential of Act 10 to help close the achievement gap that sees black students lagging behind white students. The achievement gap has become a politically volatile issue in Madison and ending it has been identified as a top priority by school district officials and school board members.

The lawsuit, filed Wednesday in Dane County Circuit Court, was brought by the Wisconsin Institute for Law and Liberty against the school board, the Madison Metropolitan School District, and labor union Madison Teachers Inc.

It was filed in the name of plaintiff David Blaska, a school district taxpayer, blogger and former Dane County Board member.

School and union officials have said they believe they had legal footing to enter into labor contracts while lawsuits challenging the constitutionality of Act 10 — Walker’s legislation restricting the collective bargaining powers of most public employees — worked their way through the courts. The Wisconsin Supreme Court ruled that Act 10 was constitutional on July 31.

WILL executive director Rick Esenberg said that no one should be surprised he sued the Madison School Board — he twice warned its members he might as they entered into collective bargaining in 2013 and 2014 for labor contracts that they unanimously approved — and that the lawsuit reflects the conservative/libertarian philosophy he has long espoused.

“This isn’t about Mary Burke,” Esenberg said. “This is a case about what the school board as a body did.”

Burke was elected to the School Board in 2012.

Ross points to significant funding of WILL by the Milwaukee-based Bradley Foundation, which is headed up by Walker campaign co-chair Michael Grebe. And Ross lists a series of WILL activities — from sympathetic “analysis” of legal issues in the John Doe investigation of Walker’s campaign to challenging campaign finance limits and supporting Voter ID laws — that he says serve Walker’s interests.

Grebe was a foundational funder of WILL, Esenberg said. But Grebe’s role as funder of the three-year old legal institute has lessened over time, he said. Esenberg estimates Grebe’s foundation will provided only about one-third of WILL’s projected $1.5-$1.7 million in funding for 2014.

At any rate, Esenberg said, he doesn’t consult with Grebe, Walker or anyone else in deciding what cases to take on.

“The notion that we think Act 10 is a good idea because it frees the schools from the restraints of union contracts and gives individual employees the right to decide whether they want to support the activities of the union — that shouldn’t surprise anyone,” Esenberg said.

WILL is not likely to prevail in court, Marquette University Law School professor Paul Secunda told the Wisconsin State Journal. “They negotiated their current contract when the fate of Act 10 was still up in the air,” said Secunda, who also accused Esenberg of “trying to make political points.”

“At some point you have to accept that fact that Act 10 was passed, was duly enacted, is the law of the state of Wisconsin and ought to be complied with,” he said.

The lawsuit seeks declaratory judgments that the board and the school district violated the law, and the contracts are void, as well as an injunction prohibiting enforcement of the contract and directing defendants to pay legal costs.

A favorable ruling also might lead to a court order that that teachers must be reimbursed for their union dues, Esenberg said.