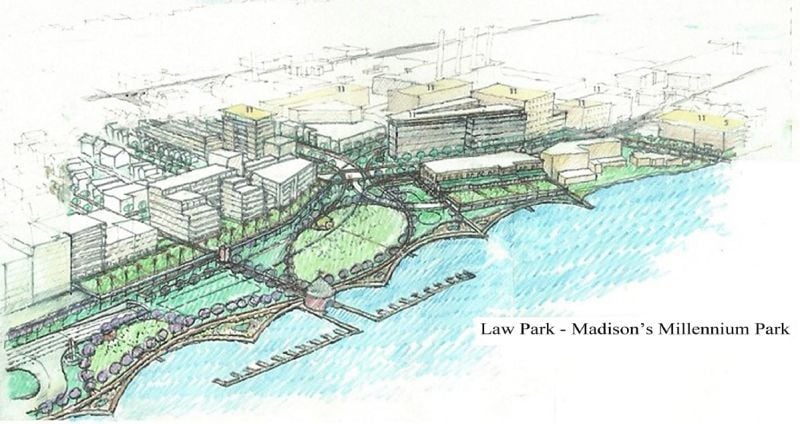 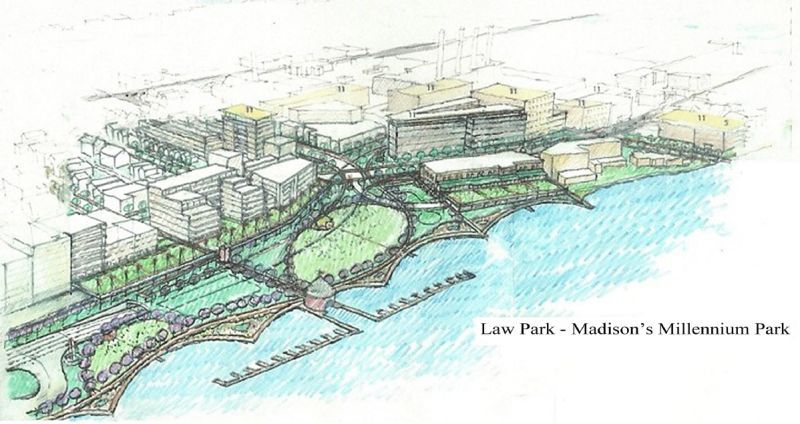 Should the city bury the messy intersection where John Nolen Drive, Blair Street and Willy Street converge to create a Madison version of Chicago’s Millennium Park?

It might prove difficult for a city this size. But a group of local architects and urban planners are urging people to give it some serious thought.

The Madison Design Professionals Workgroup recently completed a report which calls for decking over the roadway and expanding Law Park to eventually include a boardwalk, boat docking and the long-discussed Frank Lloyd Wright Boathouse.

“Cities realize that investments in decking projects, while expensive and technically challenging, are good fiscal decisions because the land is generally free, there is a high potential for public and private funding, particularly if the projects offer comprehensive benefits, and these projects can offer greater potential for spin off development, increased tax base and more significant short-term and long-term economic impacts than traditional highway improvements,” says the report.

The report got an airing last week before the city’s South Capitol District Transit-Oriented Development District, a panel convened in 2013 to study the John Nolen intersection and potential bridge connections to Law Park.

Among those impressed by the presentation was city of Madison Planning Unit Director Katherine Cornwell.

In an email following the meeting, Cornwell said legendary urban planners Lewis Mumford and Daniel Burnham “are high-fiving each other in heaven over this idea.”

Matt Covert, a staffer with the land use group 1000 Friends of Wisconsin, has studied similar decking efforts in other cities and puts the price tag for Madison at anywhere from $68 million to $300 million depending on the scope of the project. By comparison, developers are estimating the cost of the new Judge Doyle Square project at $150 million or more.

But Covert says the long-term benefits could well justify the cost. Since John Nolen Drive is an extension of U.S. 151, federal transportation funds might be available to reduce the local expense.

“The intersection has long been a barrier between the east side and the downtown, along with being a snarling route for traffic passing through,” says Covert. “Decking the roadway would address both of those issues.”

The Madison Design Professionals Workgroup in 2010 first proposed lowering a portion of John Nolen Drive to expand Law Park and connect the downtown to the lakefront as part of their "Design Visions for the City of Madison Downtown Plan." Those recommendations included filling the Lake Monona shoreline to create more park space.

But when the City Council adopted a new Downtown Plan in 2012 it removed any recommendation to fill the lake amid environmental concerns. This new plan gets around the question of lake fill by creating new open space out of the highway corridor.

“I know people have been talking about some sort of bridge connection from downtown to the lake but why not look bigger at this?” says Covert.

Urban planners for over a century have talked about linking the Capitol Square to Lake Monona, which remains visible but frustratingly inaccessible from Wilson Street.

John Nolen in his 1911 book "Madison: A Model City" called for a terraced “Grand Mall” stairway leading from the Capitol to a “Great Esplanade” stretching over a mile along the lakefront.

Frank Lloyd Wright had the same idea when he proposed what eventually became the Monona Terrace Community and Convention Center in 1997. But while offering better views, that building still doesn’t offer easy access to the shoreline.

The city of Chicago a decade ago turned a jumble of surface parking lots and railroad tracks along Lake Michigan into Millennium Park, one of its greatest assets and most popular tourist attractions.

Other cities are now looking to replicate that success, including Milwaukee, where planners there are talking about creating a large open space connecting that city’s convention center with a proposed new sports arena.

The Changing Face of Madison

High-profile developments in Madison are not just changing the look of the city, but the way the city operates, feels and lives. The Capital T…