By design, Madison has no tall buildings
9 comments
Share this
Return to homepage × 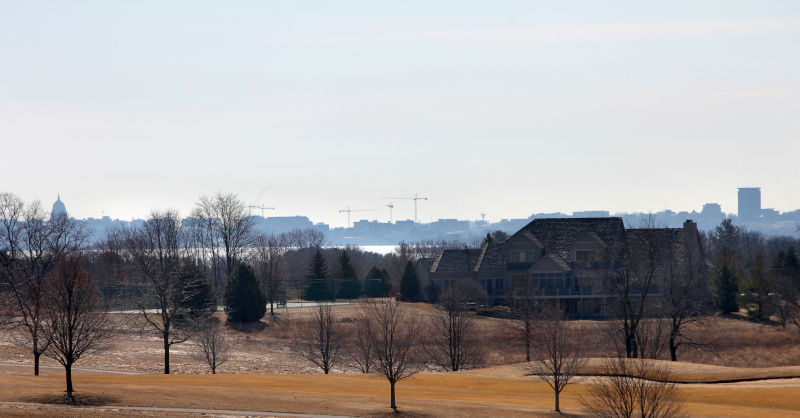 View of the state Capitol, left, and the Van Hise building on the UW-Madison campus, right. Photo by Mike DeVries - The Capital Times 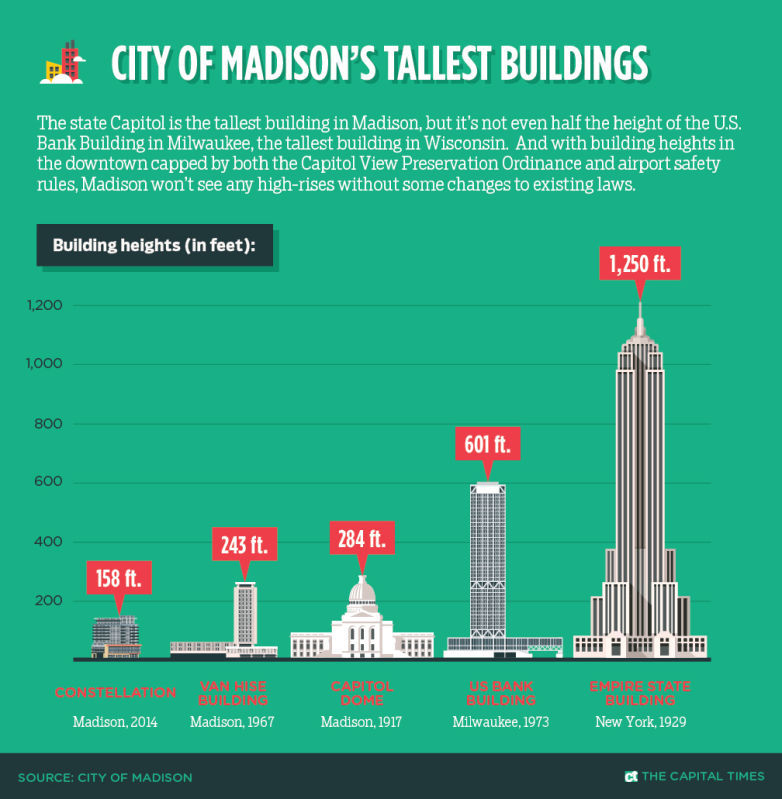 Editor's note: After posting this story at 12:30 p.m. Wednesday with an embedded table of the top 15 tallest buildings in Madison, we heard from readers about several inaccuracies. We are working to correct the list and will repost it as soon as possible.

Standing by its lonesome on the 700 block of East Washington Avenue, the 12-story Constellation apartment sure looks like one of the tallest buildings in Madison.

At 158-feet tall, however, the Constellation comes in at No. 5 on the list of Madison’s tallest buildings.

Wikipedia incorrectly lists the mixed-use apartment tower at 260 feet high and calls it “the tallest building in Madison not counting the Capitol” — but that is clearly wrong.

This error piqued our interest in identifying the tallest buildings in Madison and the history behind them. Building heights and other information referred to this in story come from a combination of web research, public records and interviews with developers and city engineers.

The tallest building in town by all accounts is the State Capitol, which measures 284 feet from the ground to the top of “Wisconsin,” the Golden Lady statue that adorns the top of the marble dome.

Rebuilt after a 1904 fire and completed in 1917 at a cost of $7.25 million, the Capitol gives Madison its unique skyline, just as the New York-based architect George B. Post & Sons intended when they patterned it after the U.S. Capitol in Washington DC. Wisconsin’s Capitol stands just 3 feet shorter.

The 19-story, 243-foot tall Van Hise Hall on the UW-Madison campus is the 2nd tallest building in Madison and, depending on perspective, can appear taller than the Capitol.

But an analysis of electronic mapping from Eric Pederson, Dan Seidensticker and Bill Lanier at the city of Madison engineering department confirms that the Capitol does indeed command the skyline. The top of the statue stands at 1,205 feet above sea level whereas Van Hise is 1,153 feet above sea level.

Still, it was when Van Hise Hall was under construction in 1966 that the City Council passed an ordinance prohibiting any future buildings within a mile of the state Capitol from exceeding the height of the base of columns beneath the dome. The worry at the time was that the UW would continue to expand with taller and taller buildings.

That "Capitol View Preservation Ordinance" remains in effect today and is one reason Madison hasn’t seen any true skyscrapers in its downtown.

But like many growing Midwestern cities, Madison enjoyed its own period of tall building construction in the 20th century using concepts developed in Chicago by famed designers like Daniel Burnham and Louis Sullivan.

In 1915, the 9-story Churchill Building at 16 N. Carroll St. on the Square was completed. Billed as Madison’s first skyscraper at 134 feet, it was the tallest building in Wisconsin outside of Milwaukee at the time it was completed.

Concerned that other modern high rises would soon ring the Square, Madison officials then passed a 90-foot height limit for new buildings around the Capitol.

But the law was later struck down by the state Supreme Court, opening the way for the 1924 construction of the 11-story, 140-foot Belmont Hotel at the corner of Pinckney and Mifflin streets. It was purchased by the YWCA in 1968 and was added to the National Register of Historic Places in 1990.

The Great Depression of the 1930s slowed the private sector building boom in Madison but government stepped in with the 1939 completion of the stately State Office Building at 1 W. Wilson St. The 13-story, 178-foot building remains the third tallest in Madison behind Van Hise and the State Capitol.

In fact, aside from the original Edgewater Hotel built in 1948, Madison saw no other tall buildings constructed until the real estate boom of the 2000s. Between 2006 and 2010, Madison witnessed the opening of Nolen Shores condominiums, the Metropolitan Place Phase II condominiums, Capitol West condos and the Hyatt Place hotel. All are 11 stories or higher.

Chicago has a host of tall buildings, of course, including the 108-story, 1,451-foot Willis Tower, formerly the Sears Tower. When it opened in 1973, it was the tallest building in the world, surpassing the twin towers of New York’s World Trade Center.

The Sears Tower held the title of “World’s Tallest Building” for 25 years but has since been surpassed by a half-dozen other buildings including the 2,722-foot Burj Khalifa in Dubai, United Arab Emirates, which claimed the title in 2010.

Any chance of Madison ever seeing a true high rise building is muted by both the Capitol View Preservation Ordinance and a separate height limit from the Dane County Regional Airport.

Dating to the 1950s, the FAA-backed height limit caps any structure at roughly 160 feet tall or 1,009 feet above sea level within three miles of the airport boundary. The three-mile limit extends roughly to Butler Street near the Capitol Square and covers most of Madison's north and east sides.

Gebhardt Development ran into the airport height restriction when designing the 12-story Constellation, which comes in just under the limit. Gebhardt has since designed the 14-story Galaxie mixed-use development on the 800 block of East Wash to exactly the same 158-feet height to appease airport officials.

Meanwhile, a bill introduced in January by Sen. Fred Risser (D-Madison) to expand the 1989 state version of the Capitol View protection zone from one to two-miles hasn't found much support.

Risser had expressed concerns the recent glut of apartment construction in downtown Madison might put the Capitol View at risk, but his bill faced opposition from the Greater Madison Chamber of Commerce, the city of Madison and the Apartment Association of South Central Wisconsin.

While Risser’s bill appears dead, the combination of the airport height limit and historic precedent make it seem unlikely any true high-rise proposals will come forward.

On the other hand, if Donald Trump wanted to build a tower in Madison outside the airport and Capitol view restricted areas, who’s going to stop him?

The Changing Face of Madison

High-profile developments in Madison are not just changing the look of the city, but the way the city operates, feels and lives. The Capital T…

View of the state Capitol, left, and the Van Hise building on the UW-Madison campus, right. Photo by Mike DeVries - The Capital Times