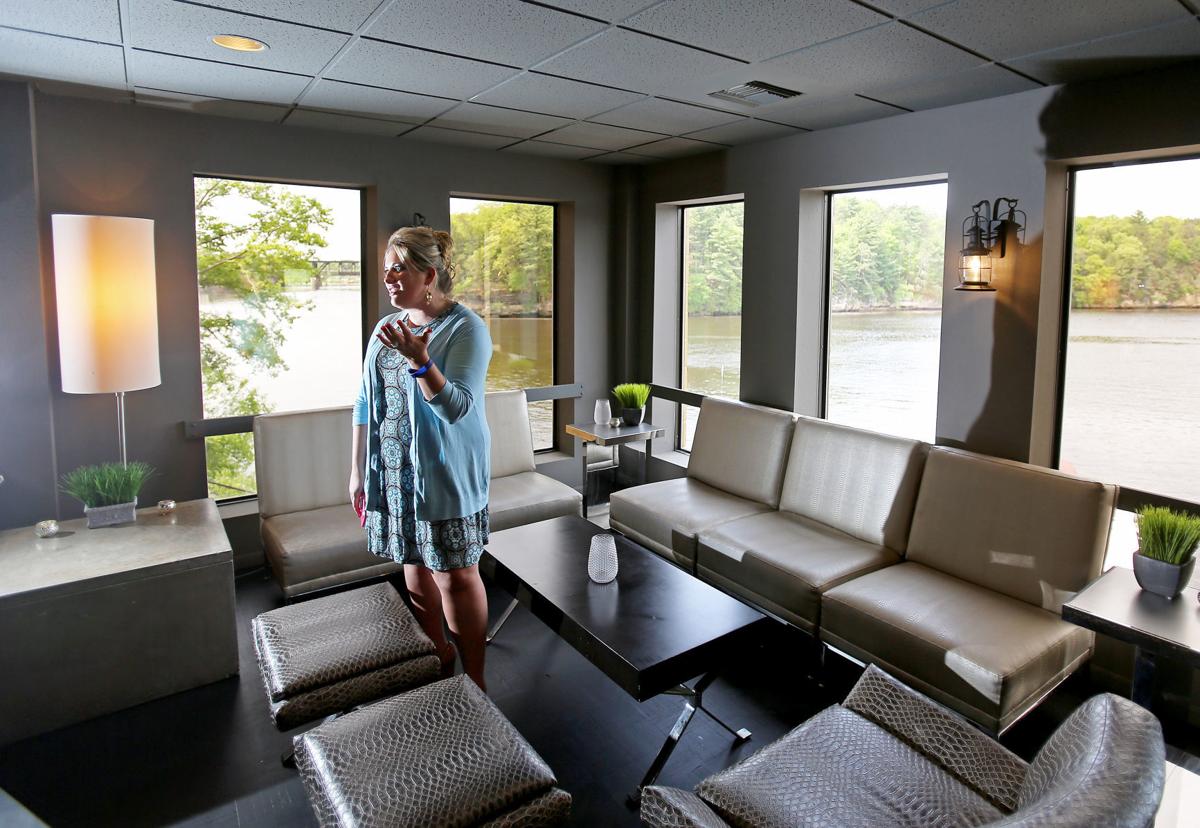 Becky Brown, manager of the River Inn Resort in Wisconsin Dells, in the lounge of the renovated boutique hotel that overlooks the Upper Dells of the Wisconsin River. The hotel is among the businesses in the tourist hotbed trying to cater to more than just families as the area further grows more into a year-round destination. 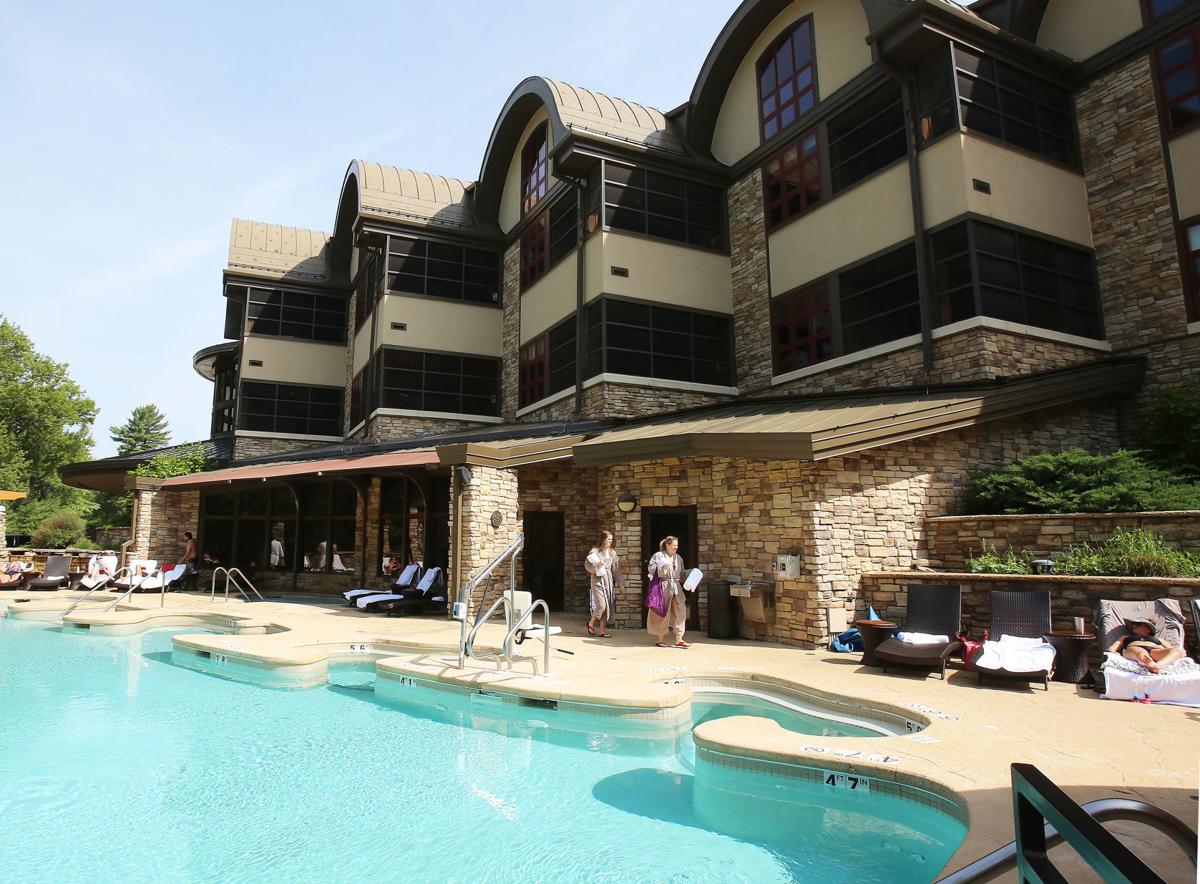 The year-round outdoor pool in the relaxation area of Sundara Inn & Spa in Wisconsin Dells is kept at a constant 84 degrees but guests now have the option of a recently added saltwater pool at the spa.

WISCONSIN DELLS—The newest ride at Noah’s Ark stands six stories tall, is 335 feet long and allows riders on inner tubes to reach speeds up to 32 mph as they plunge down a 37-foot drop near the ride’s end.

One of the largest of its kind in the U.S., Raja resembles a monstrous cobra with green eyes that will be illuminated at night with LED lights. Once it opens in the coming days on the site of the old bumper boats attraction, the water slide will likely be among the park’s most popular rides along with Scorpion’s Tail, Black Anaconda and Point of No Return.

But on the other side of Lake Delton, away from the acres of concrete, plastic tubes and screams of fun, water has been harnessed for its tranquility.

Set back on a winding road among stands of pines next to Wild Rock Golf Club, one of the signature experiences at Sundara Inn & Spa is a purifying bath ritual. This is where guests, under a rainfall shower, exfoliate their skin with a body polish made from local sandstone. There are steam rooms with aromas of rose and sandalwood, a 102-degree essential oil-infused hot pool and a 72-degree cool plunge pool.

Quiet spaces are prolific and electronic devices are strongly discouraged. There’s a meditation trail through the woods and a hammock retreat. And to further set itself apart from the frenetic pace and over-stimulation of the Dells, no children are allowed.

“This being adult-only is really a part of what makes it a sanctuary,” said Heidi Michel, Sundara’s marketing director. “It’s a different way to experience water.”

Tourism is a more than $1 billion industry here and accounts for about 10 percent of the state’s tourism revenue, according to a study released this month by the state Department of Tourism. But while families with children, many of whom come for youth sports tournaments, spend millions of dollars on water park stays, rides on Ducks, zip-lining excursions, slices of pizza, pieces of fudge and go-cart rides, another economy is adding to the bottom line.

The experiences can include golfing, touring a winery, fine dining, taking in a show, gambling at Ho-Chunk Gaming and sampling the latest creations from area brew pubs and distilleries. Resorts like Kalahari, Mount Olympus, Wilderness, Chula Vista and Great Wolf have helped turn this community into a year-round destination and have upped their game in recent years by catering to reunions and kid-free weekend getaways and by adding in-house spas. At Kalahari, one of the most visible water park resorts due to its location along Interstate 90-94, a major expansion is underway designed to increase weekday stays year-round.

The resort, which opened in 2000, is in the midst of a $35 million expansion project to double its convention space to 212,000 square feet. The project, which broke ground in October, includes a 56,000-square-foot ballroom and will allow for larger conventions and help reduce instances where on a regular basis some conventions are being turned away due to a lack of space, according to tourism officials. The Wisconsin Dells area draws 4 million to 5 million visitors a year, which includes those who attend more than 5,600 meetings and conventions annually, a number that has grown over the past 20 years.

“When we first opened Kalahari, we definitely had our work cut out for us to encourage adoption of the idea that a convention center and indoor water park could exist in the same business model,” Todd Nelson, owner of the resort company said last year when he announced the project. “We were steadfast in our vision, and it’s been incredible to see the demand grow exponentially.”

Sundara, which is celebrating its 15th year, is doubling down on grown-up getaways with a more than $13 million expansion. The project includes the addition of eight guest suites and the renovation of the spa’s existing 26 suites with Kohler Spa Shower Systems with digital temperature controls. The nearly 40,000 square feet of new space includes 13 private treatment rooms, a salon for manicures and pedicures, fitness and yoga studios, a retreat space for cooking demonstrations and classes.

A salt-treatment therapy room allows guests to sit in lounge chairs as a halo therapy generator releases microscopic salt particles into the air to improve respiratory function and rejuvenate the skin.

Other additions to the inn and spa, where stays range from $200 to over $300 a night, include a larger lobby, a saltwater pool with fire-pit seating on the deck and the Cambrian Oasis, which features cast replicas of the area’s sandstone bluffs, a large hot soak with waterfall feature and an indoor/outdoor pool bar that serves craft cocktails.

The spa has added a full-service restaurant with an adjacent room for meetings and private dining, while a large outdoor patio off the restaurant has seating around six fire pits.

In downtown Wisconsin Dells, a multi-year, $40 million project is underway to give the historic downtown a makeover.

There is talk of a 20,000- to 30,000- square-foot public market that could host year-round public events and become a showcase for state-produced products.

Just a few blocks north of the downtown along River Road, the River Inn has been transformed into a boutique hotel. The property, historically known as Drinker’s Landing, is where the first steamboat tours of the Dells began in 1873. In 1924, Josiah Barrett built the Blackhawk Hotel on the site when a room could be rented with a bath and meal for $1 a day.

The hotel was destroyed by fire in 1984 but replaced a year later with a five-story, 56-room hotel that offers stunning views of the Wisconsin River.

The property, located at the end of the river walk from downtown, was purchased by brothers Adam, David and Rich Makowski and their parents, Richard and Grace, in 2003. From 2009 to 2017 the property was leased to Mount Olympus but since resuming operations over the past year, the Makowski family has spent more than $750,000 to upgrade the property. The work has included renovated rooms, a remake of the lounge, the addition of a 3,000-square-foot outdoor deck and boat docks.

“What we’re trying to accomplish is to create a boutique hotel that effuses the river history and culture of Wisconsin Dells,” Adam Makowski said. “Everything was redone inside and out.”

Back at Noah’s Ark, the 70-acre property features over 50 water slides, the Big Kahuna Wave Pool, Paradise Lagoon, Adventure River and, since opening in 1978, has helped define Wisconsin Dells as the “Waterpark Capital of the World.” Noah’s Ark is still a Memorial Day Weekend to Labor Day Weekend destination, but the trend line for many other businesses is to go year-round and not just market to families.

“This city is changing,” Matt Hehl, marketing director for Noah’s Ark said last week as scores of workers prepped the park for the Memorial Day Weekend opening. “It used to be a very summer-centric place and now people are coming here year-round, and it’s great for all of us.”

A group of developers submitted a rezoning request to turn four properties on the 100 block of State Street into a boutique hotel.

The companies were responding to news of a deadly sinking of a similar duck boat in Missouri on Thursday.

Tru and Home 2 Suites are proposed for the East Side property next to Home Depot and along Interstate 39-90-94.

Becky Brown, manager of the River Inn Resort in Wisconsin Dells, in the lounge of the renovated boutique hotel that overlooks the Upper Dells of the Wisconsin River. The hotel is among the businesses in the tourist hotbed trying to cater to more than just families as the area further grows more into a year-round destination. 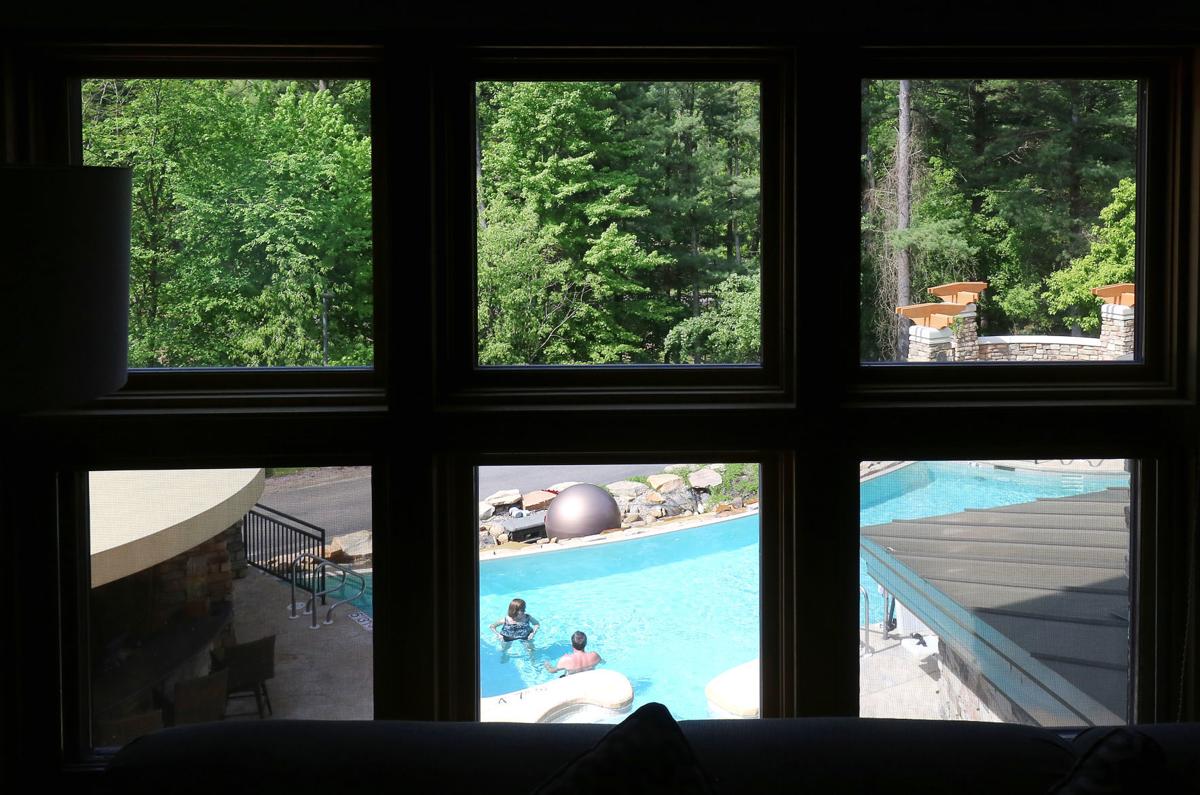 A more than $13 million expansion and renovation at Sundara Inn & Spa is a prime example of the growth in tourism not centered around water parks and children. The spa and inn, located east of Lake Delton, is for adults only and now has a full service restaurant, more guest suites, treatment rooms and a saltwater pool. This is a view, from a renovated guest room, of the spa's year-round outdoor pool that is kept at a constant 84 degrees. 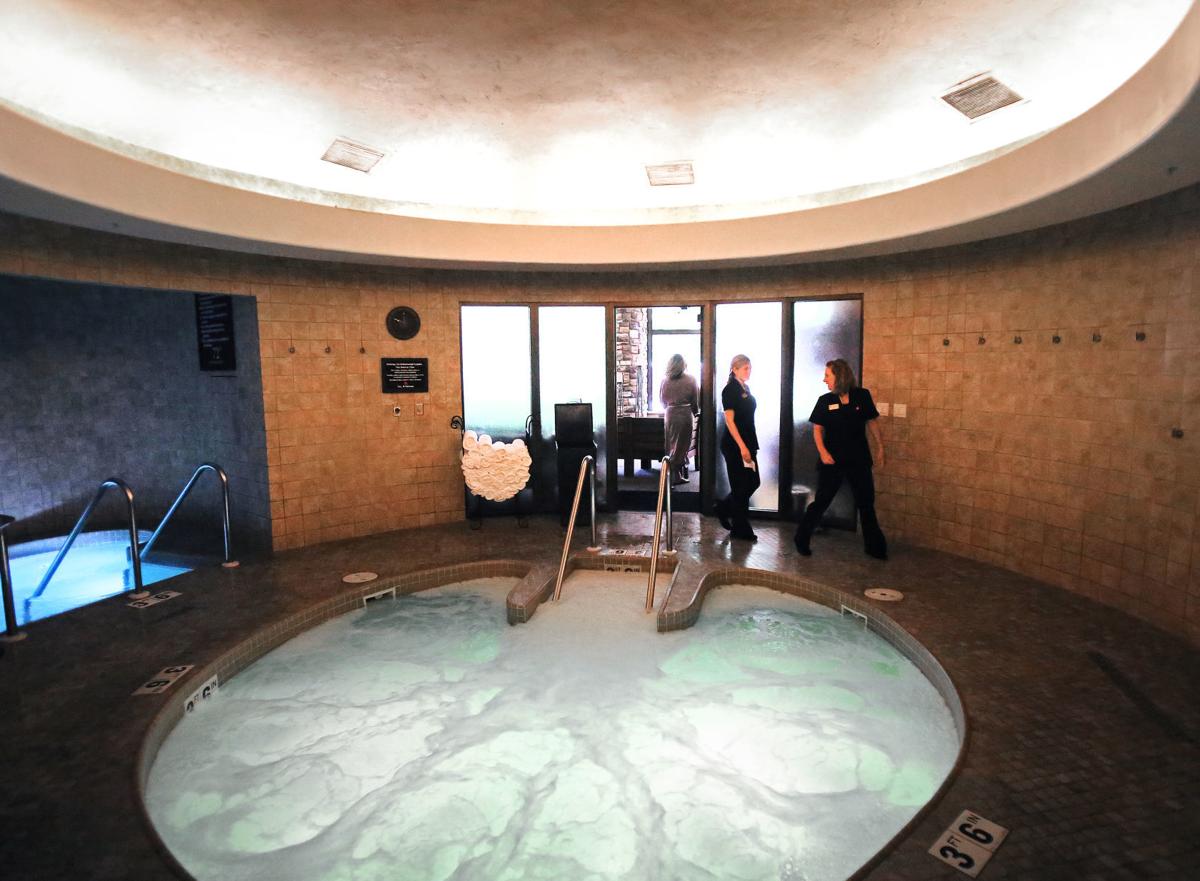 The bathing ritual area, with pools of water at varying temperatures, is one of the relaxation and purifying attractions for guests staying at Sundara Inn & Spa in Wisconsin Dells. The larger pool holds 102-degree water, while the cool-plunge pool, upper left, is 72 degrees. This area also includes rain showers and steam rooms. 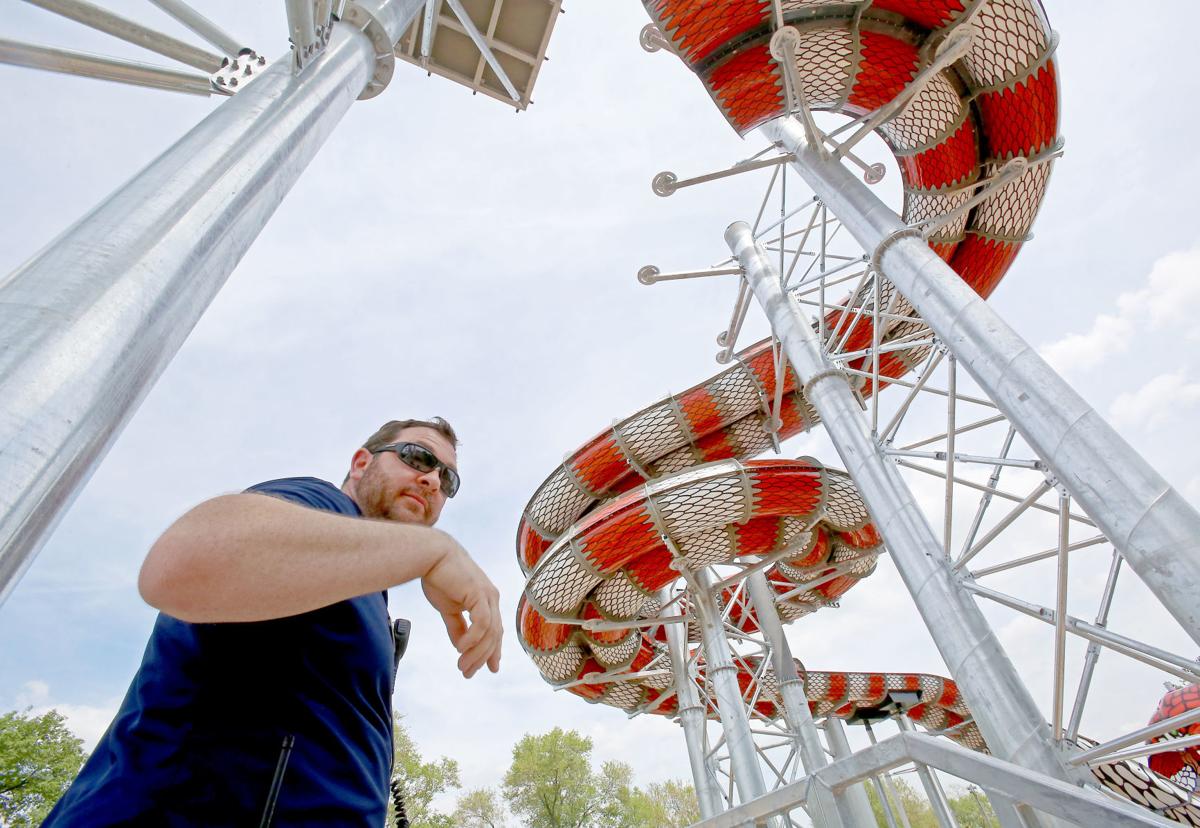 Matt Hehl, director of marketing at Noah's Ark Water Park, below Raja, the park's newest ride. The ride stands six stories tall, is 335 feet long and allows riders on inner tubes to reach speeds up to 32 mph as they plunge down a 37-foot drop near the ride's end. 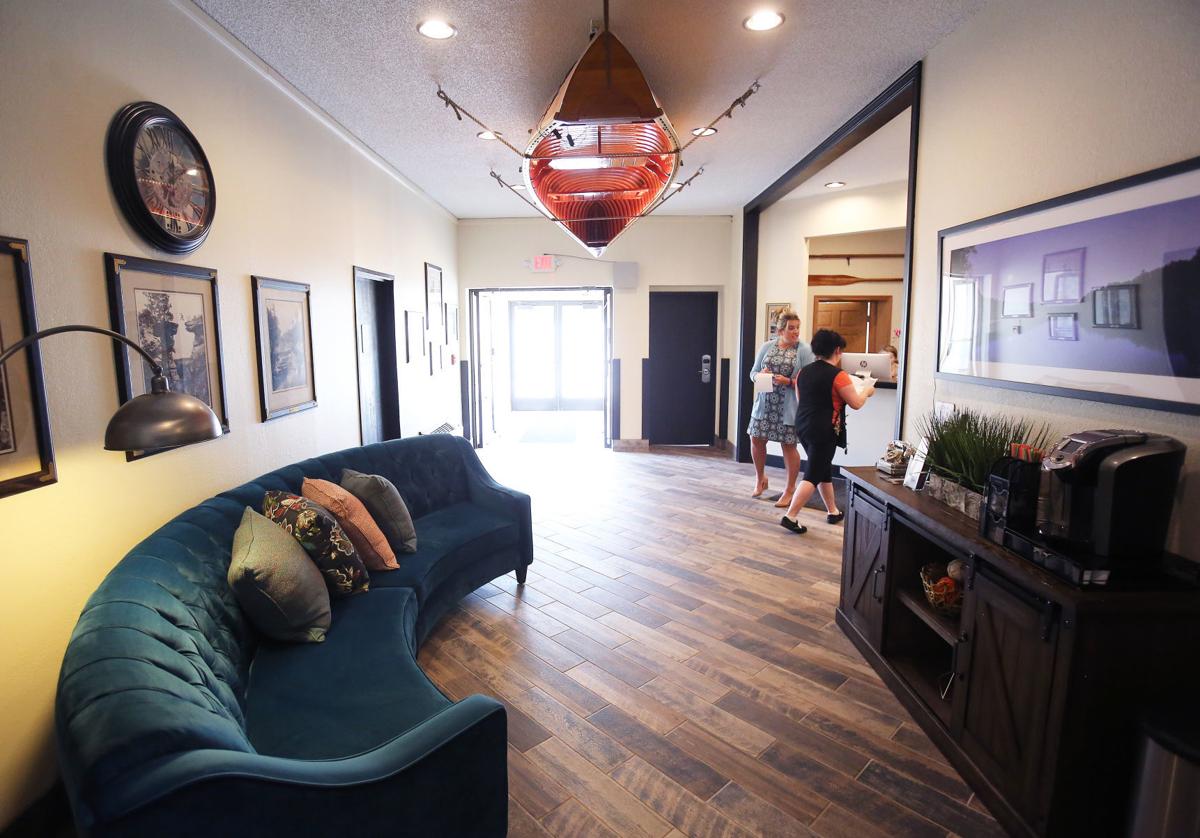 A $750,000 renovation has transformed the River Inn Resort in Wisconsin Dells into a boutique hotel. The property, owned by the Makowski family, is just a few blocks north of the city's historic downtown and offers picturesque views of the Wisconsin River. 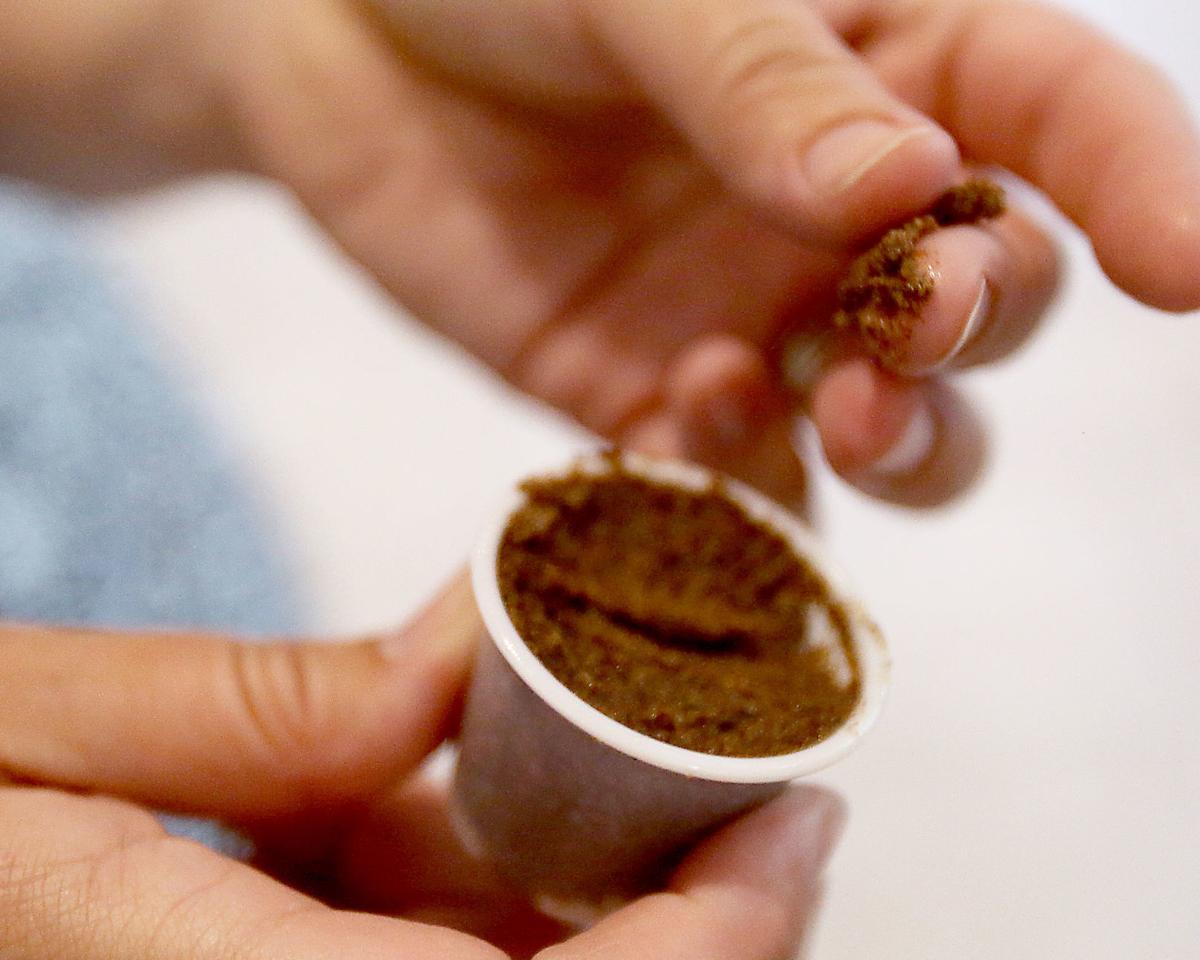 Sandstone body polish at Sundara Inn & Spa in Wisconsin Dells is made from locally quarried sandstone and is used as part of a purifying bath ritual. The process includes a rainfall shower, steam rooms with aromas of rose and sandalwood, a 102-degree essential oil-infused hot-pool and a 72-degree cool plunge pool. 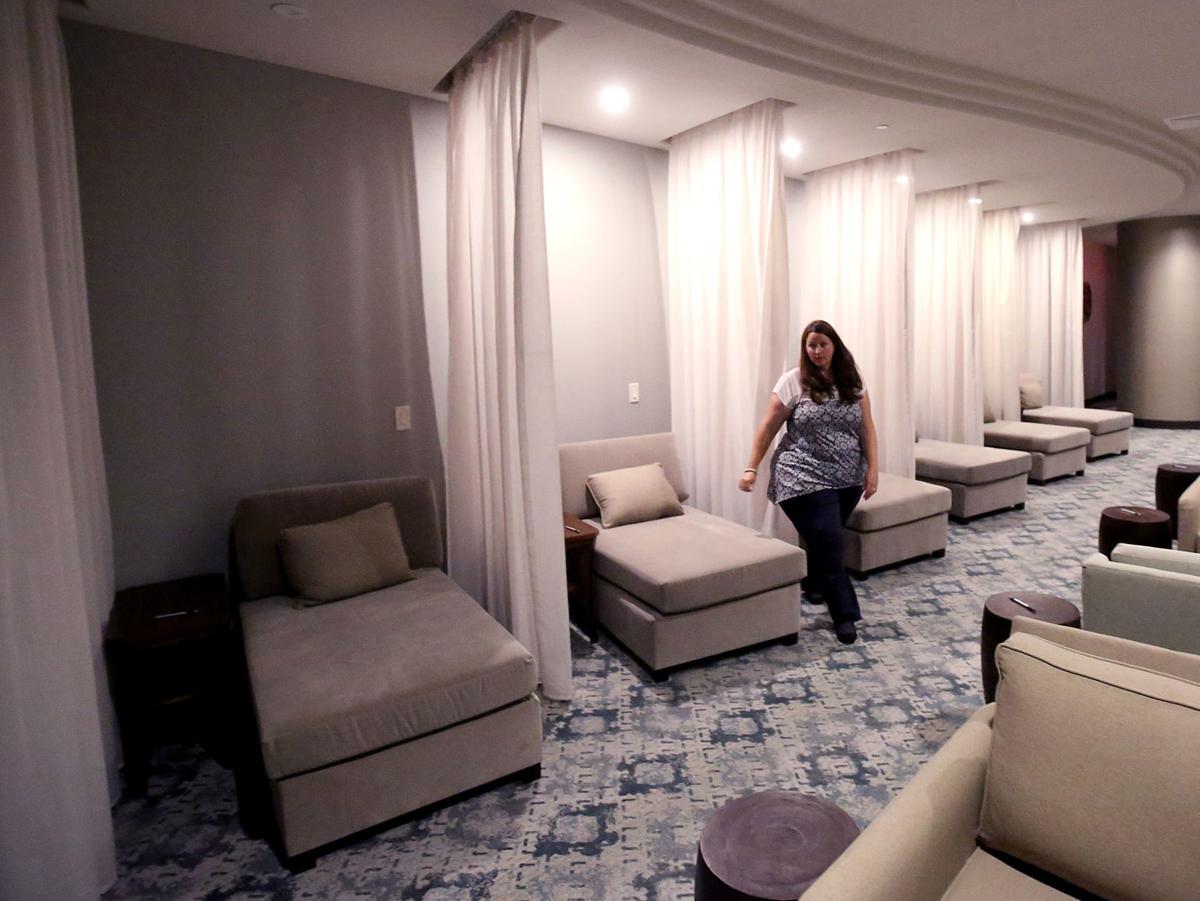 Heidi Michel, marketing director at Sundara Inn & Spa in Wisconsin Dells, makes her way through a waiting area for guests near the spa's treatment rooms. The addition is part of a more than $13 million expansion and renovation project.

The year-round outdoor pool in the relaxation area of Sundara Inn & Spa in Wisconsin Dells is kept at a constant 84 degrees but guests now have the option of a recently added saltwater pool at the spa. 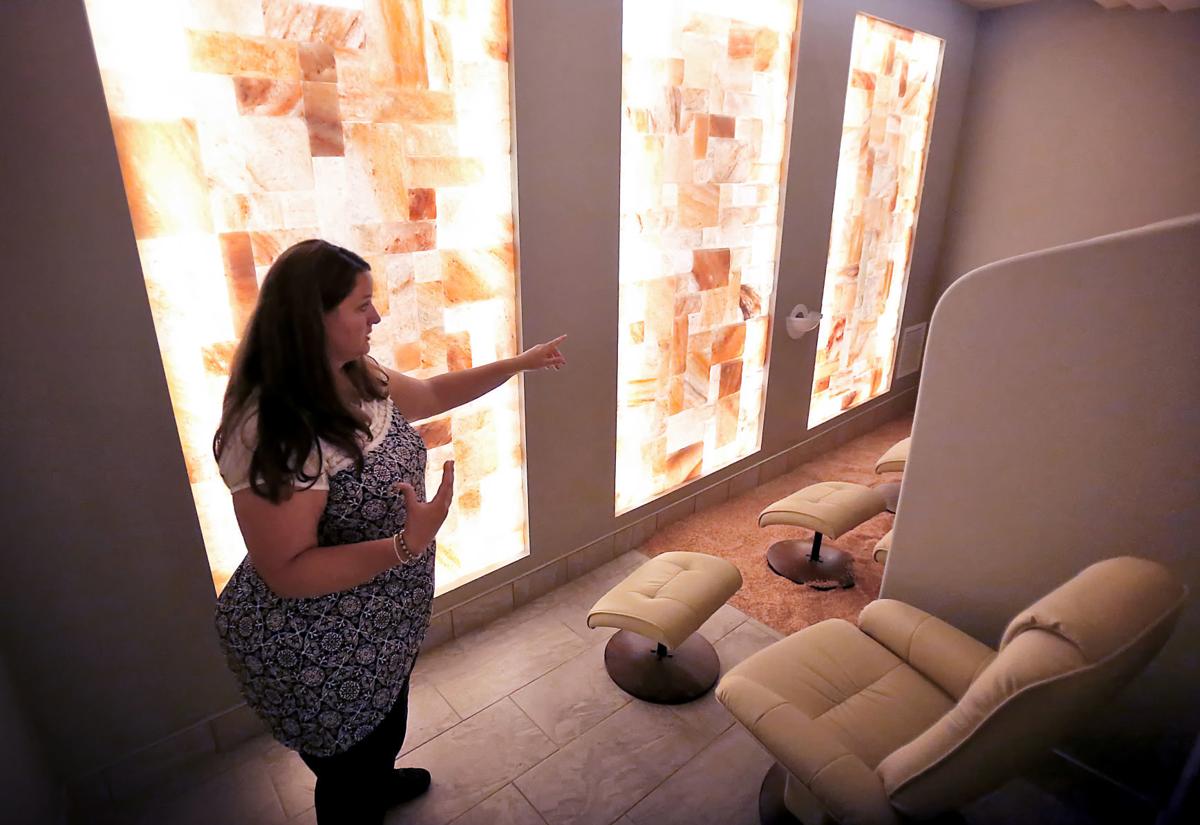 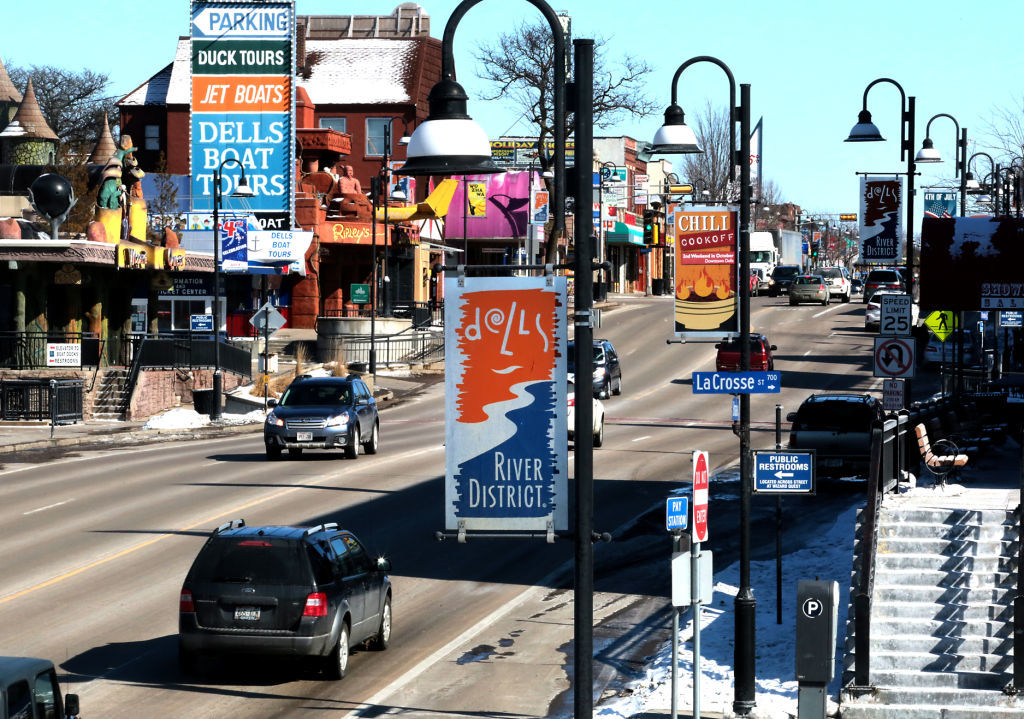 Downtown Wisconsin Dells is changing as more plazas and wider sidewalks are part of a plan to improve the popular tourist destination.