ARENA — The words are about soil, tools and cows.

There is talk of family and friends, chores at dawn, walks along a creek.

Daniel Smith’s poetry also tells the stories of the physical and emotional pain of farming, a profession, lifestyle and calling he gave up in 2008. Only the pages of his new book, “Ancestral,” go beyond his own personal experiences of financial strife, a wrecked shoulder and grown children who have chosen other paths. Smith sold off his dairy herd, moved off land owned for decades by his family and began anew.

The 99 pages published in hard cover by Waters Edge Press in Sheboygan includes collections of hardships gathered over three years when he worked as a farm financial counselor for the state Department of Agriculture, Trade & Consumer Protection. Smith traveled the state, sitting at kitchen tables, standing in barns, leaning on fences listening, empathizing and offering advice drawn from his past.

Some operations could be saved. A few farmers only needed an ear for reassurance they were on the right track. Most, however, were doomed with overwhelming debt, their equity having gradually vanished. Depression was prolific. Suicides were on the rise.

When Smith began farming full time in 1978, Wisconsin had 47,700 dairy farms. Today, there are about 6,000, and the number continues to decline while milk production rises with the growth of farms with thousands of cows and milking assembly lines that never pause.

“This is the story of the Wisconsin dairy industry,” Smith said. “There’s a story of pain and decision-making and process that every one of those 41,000 dairy farms we’ve lost since 1978 went through. I’m trying (with poetry) to reach both the farming and the non-farming audience. This is a social, economic and cultural impact that Wisconsin needs to deal with. Because the result has not been felt in the grocery store. Losing those 41,000 family dairy farms had a tremendous impact on local schools, school boards, the town board, the co-op board. There’s just fewer people in those areas.”

Smith will begin ramping up his promotion of the book later this summer and into the fall. One event will be a 3 p.m. reading and signing Aug. 22 at Arcadia Books in downtown Spring Green. The events will allow Smith to better contextualize his writings, answer questions and likely hear more stories of farms lost, lives changed.

“Just today I felt myself fall out of love with this land,” Smith wrote in his poem “Dry Dirt,” 80 pages into his book. “How many times can a man kick dirt, swear it has never been so dry. Now I drop decades of tending crops and cattle into a heap out back, pull the year shut like one would an old door on an empty barn.”

One of eight children, all of whom went on to get college degrees, Smith grew up on a family dairy farm just north of Freeport, Illinois. He graduated in 1978 from UW-Madison, where he met his wife, Cheryl, who grew up in a suburb of Cleveland. They returned to the farm, where Dan farmed, Cheryl taught kindergarten and first grade, and they raised three boys who as men all graduated from UW-Madison but veered away from agriculture. Ryan is a facial reconstruction surgeon in Chicago, Levi an attorney in Minnesota, and Austin, the oldest, teaches writing and poetry at Stanford University.

After college, Daniel Smith farmed with his father for 20 years, and after his dad retired farmed on his own for about 10 years. Smith, now 67, never missed a milking from 1999 to 2007, something he regrets. When Smith fell through the rotted floor of a hay wagon and injured his shoulder, he realized something had to change.

“Sometimes it takes a slap in the face,” Smith said. “We didn’t go anywhere. It was pretty stupid.”

That’s when Smith made the difficult decision to sell his 150-head herd, auction off equipment and sell the farm. In 2008, he and Cheryl moved to a 22-acre farm southeast of Arena and just west of Blue Mounds Creek. Their property along Knight Hollow Road includes a home built in 1992 out of logs from Canada and filled with memories from their days in northern Illinois. Across the road sits Smith’s 1951 Farmall tractor and a collection of tools, some of which hang in a former chicken coop turned tool shed. Others, including a 60-pound anvil, are in the lower level of a small barn, its use for farm animals and hay and grain storage long past like so many others around the state.

“I’ve hauled my father’s anvil due north up out of the black Illinois farm ground he and I worked, decades our home,” Smith wrote in “Anvil,” the second poem in the book. “Set down sixty pounds onto the floor of this old barn, new only to me. All around, our bewildered tools hang in the strange light of the cracked windowpane ... At my feet, my father’s anvil, his striking song of steel on steel still hammering home.”

Above the barn’s lower level is where Smith has a writing desk in a remodeled area with views of pasture and a hay field. There’s space on the desk’s surface for his laptop but also an old corn machete and a hunk of iron with slots — now used as a bookend — which was designed to decouple chains back on the Illinois farm. Smith began writing in high school and while in college had a poem, “Ode,” about his father, published in 1977 in the Ocooch Mountain News, a now-defunct monthly newspaper out of La Farge. Twenty years later that same poem was part of Smith’s first book, “Home Land.”

The Smiths, who share their home with their dog, Jax, a rescued mix of black Lab and shar-pei, call the Driftless Area home now. The family farm in Illinois was sold to a doctor, who for a while raised goats and used some of the buildings for boat and camper storage. Some of the silos have been removed and housing projects have been eating away at land once tilled or used as pasture. The 1851 farmhouse he grew up in with his seven siblings is relatively quiet.

‘Writing helped me deal with it’

“It bothers me a lot,” Smith said. “The economic, social and cultural impacts of farming are very complex. I think going through all of that and having experienced the emotional turbulence of that really helped me write about it and writing helped me deal with it.”

With time on his hands after the move north, Smith began volunteering with DATCAP as a counselor, meeting with farmers, and in short time was hired full time. He took a job in 2011 to become CEO of Midwestern BioAg in Blue Mounds and guide it through a succession plan but returned to DATCAP in 2013 to serve as administrator of the Division of Agricultural Development. Since 2018, Smith has been president and CEO of the Cooperative Network, directing daily operations of a trade association that represents 250 cooperatives in 12 business sectors in Wisconsin and Minnesota.

The turmoil of farming remains with Smith, but he says he feels and looks younger than when he stopped milking, plowing and harvesting 13 years ago. Near his home, there are barns unused, the village of Dover is a ghost town, an old one-room schoolhouse has been vacant for years at highways K and 14, while in Arena the elementary school has been shuttered, all casualties of the changing small-farm economy that continues to dwindle while struggling to evolve.

“That stress really gets to people over a long period of time. It wore my dad out just trying to keep the farm going and he had the next generation coming on,” Smith said. “So what I’ve really tried to do with ‘Ancestral’ is talk about the history and the heritage of the family farm and show both the good and the bad.”

Photos: The poetry and Arena farm of Dan Smith

A team of maritime archeologists from the Wisconsin Historical Society is documenting the scores of wrecks in the 962-square-mile Wisconsin Shipwreck Coast National Marine Sanctuary.

No injuries were reported but the storm damaged homes, agriculture buildings and flattened cornfields in and around Boscobel.

The hotel in Green Lake has reopened after closing in 2019 and has undergone an extensive remodeling that has touched every inch of the property.

Athenos had sales in 2020 of $90 million and positions Emmi for further growth in the specialty cheese market.

The Verona company made Inc. magazine's list of the fastest growing private companies in the country but sales are expected to be flat in 2021 as the company refocuses its mission.

The East Side destination is aimed at dog owners who enjoy beer and, unlike other dog-friendly businesses, has an off-leash area and lots of exited hounds. 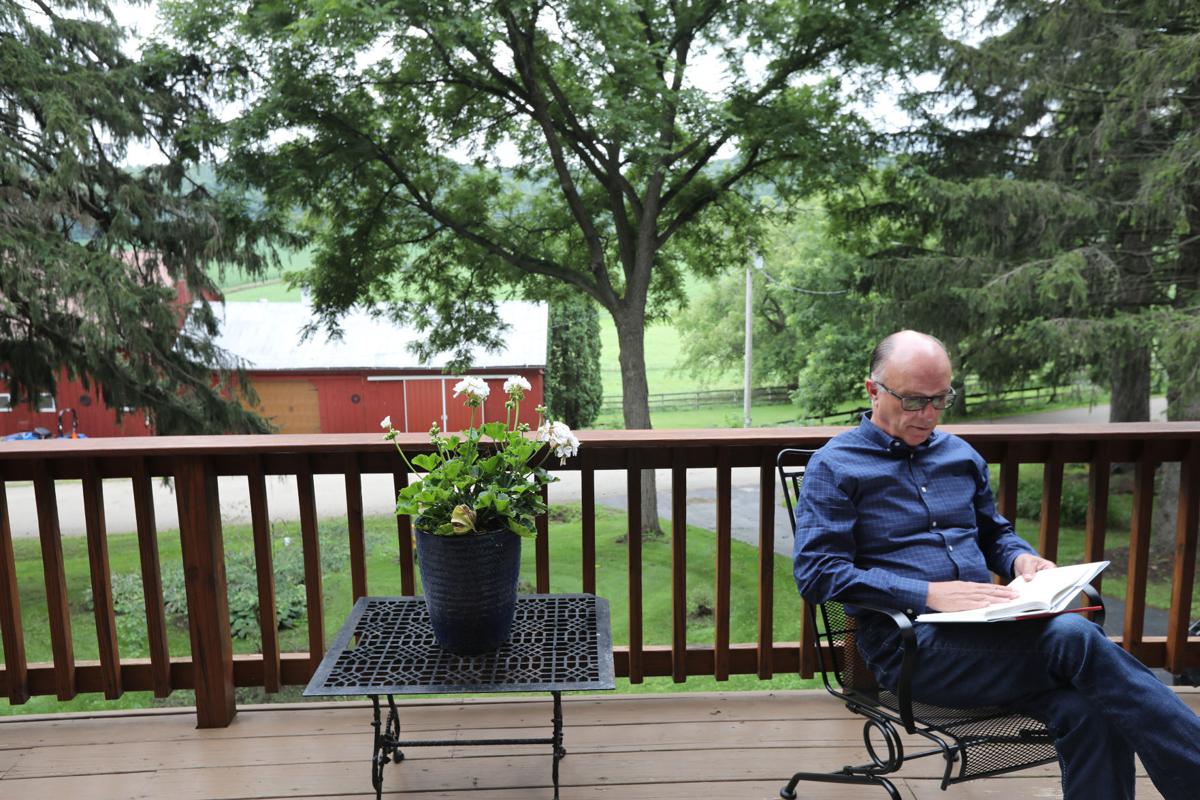 Dan Smith, a poet and former dairy farmer in northern Illinois, reads one of his poems from his new book "Ancestral" at his home near Arena. The poems draw from not only his time farming but from three years as a farm financial counselor in Wisconsin. 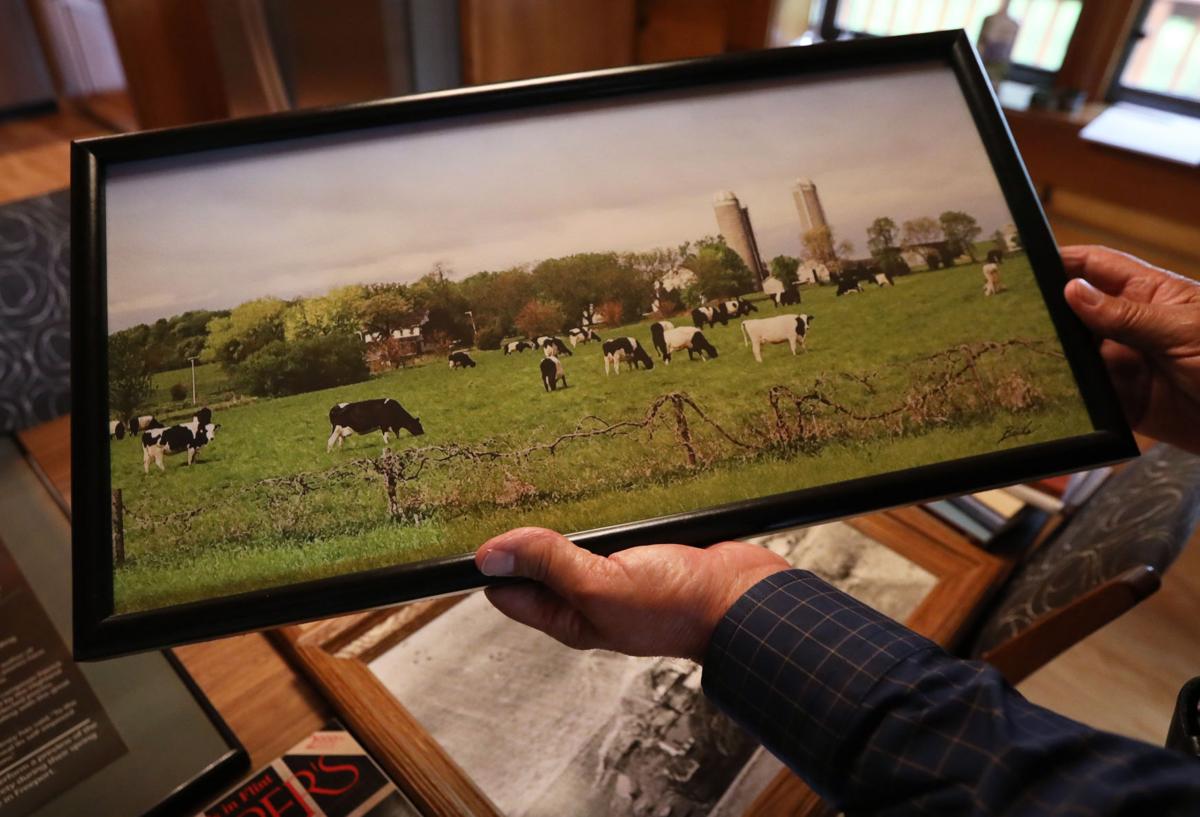 Dan Smith displays a photo of his former dairy herd as it grazes north of Freeport, Illinois. Smith's poems speak to the loss of dairy farms throughout the country. In Wisconsin, 41,000 herds have vanished since 1978. 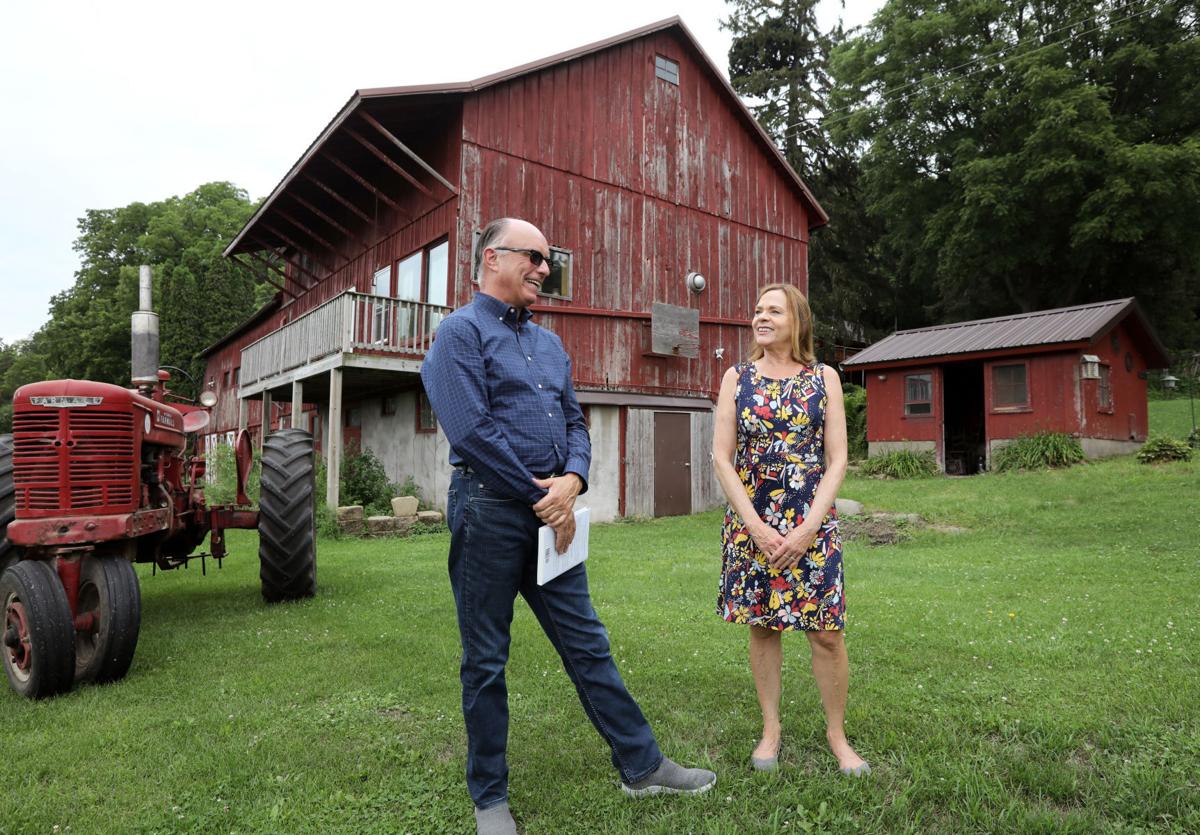 Dan Smith, a poet and former dairy farmer, with his wife, Cheryl, outside their barn across the road from their home in rural Arena. The 1951 Farmall tractor has been in Smith's family for 70 years. 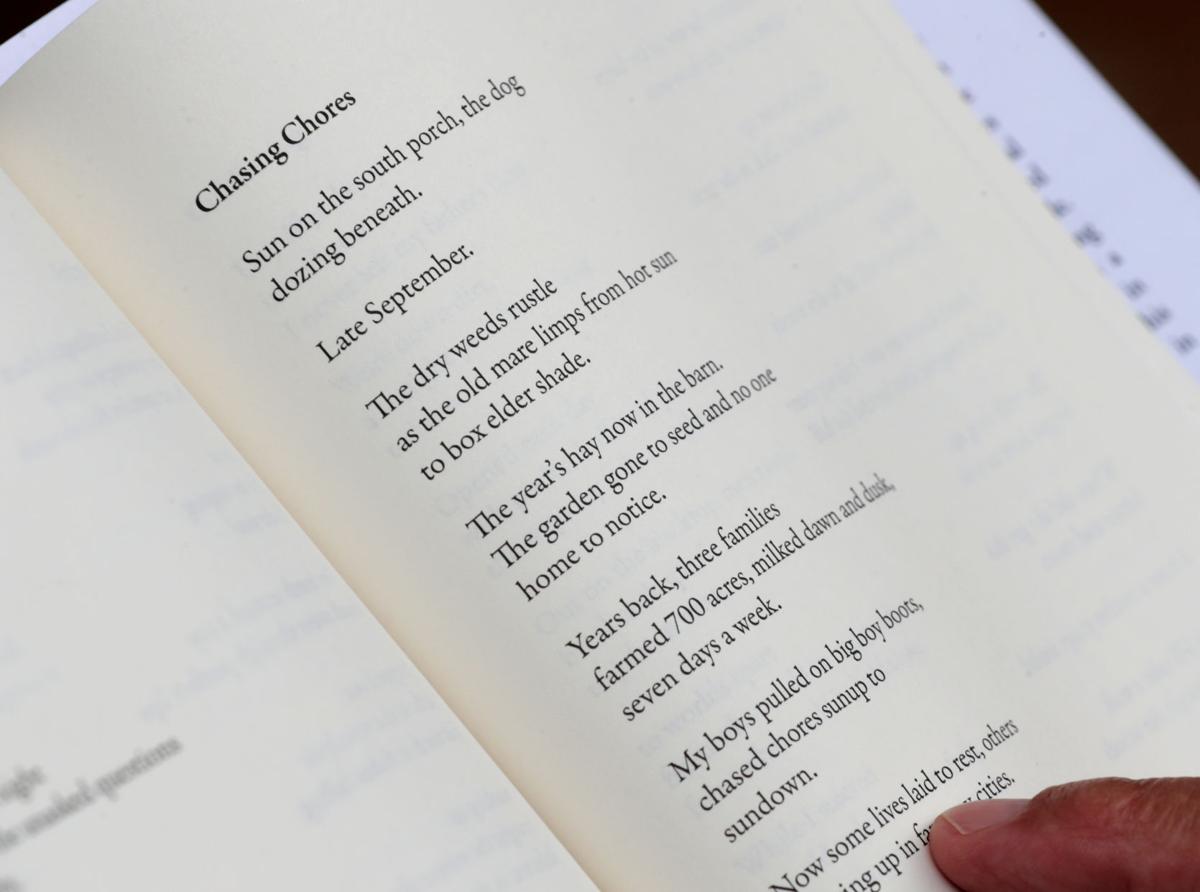 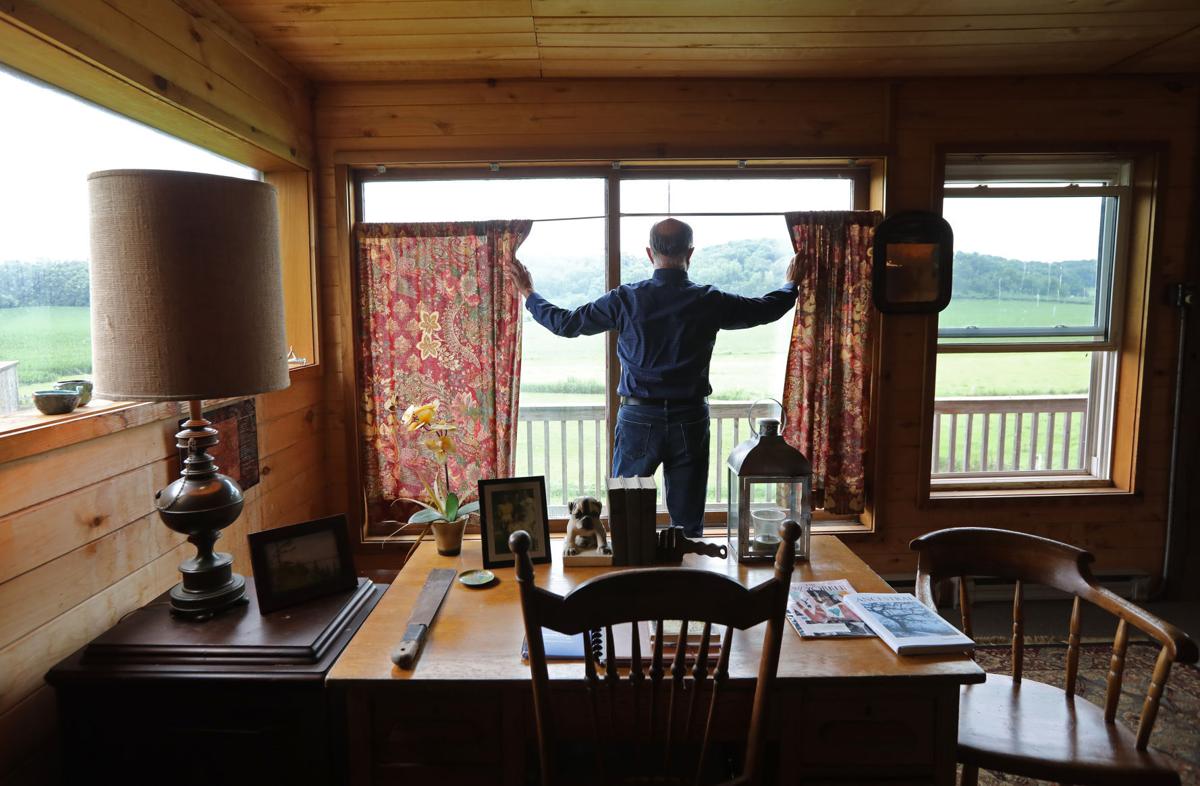 A portion of a barn on Dan Smith's 22-acre property near Arena serves as a writing space. Smith moved to the area in 2008 after a life of farming in northern Illinois. 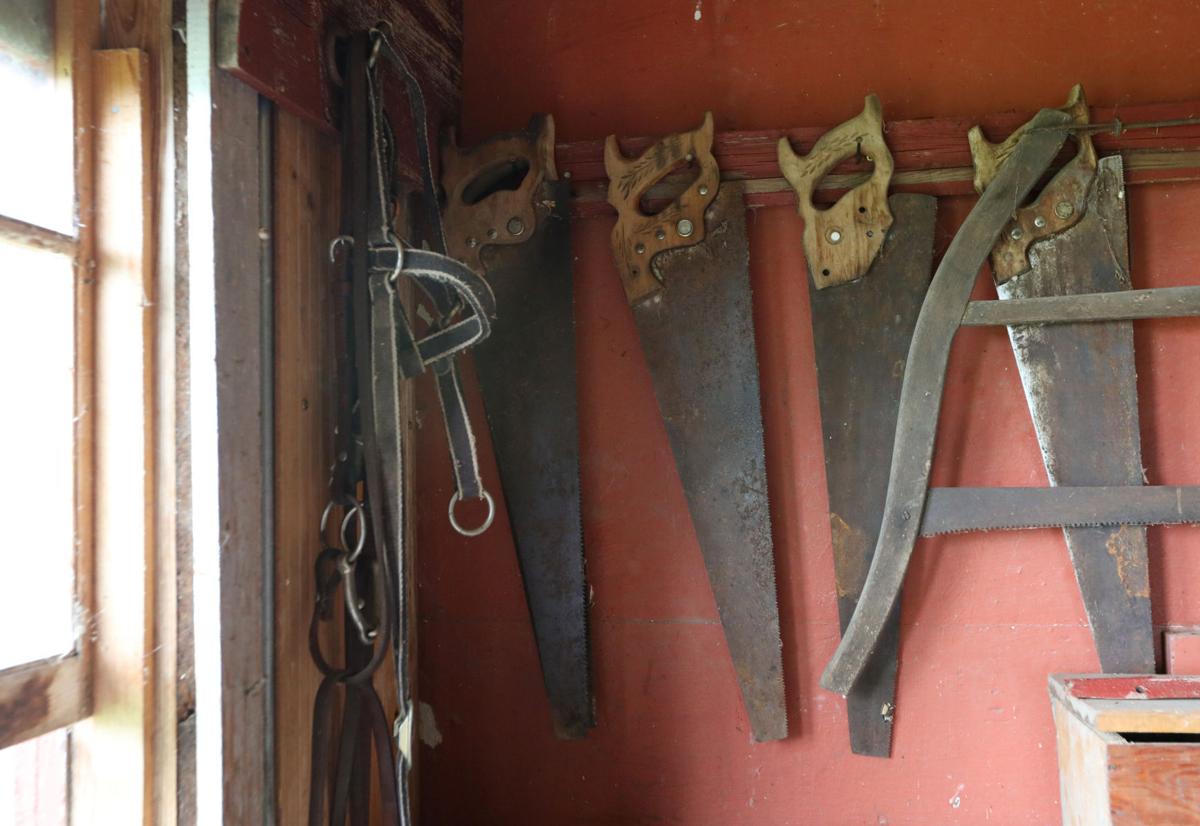 Not all of the tools from Dan Smith's former farm in northern Illinois were sold at auction. Some hang in a former chicken coop turned tool shed at his home near Arena. 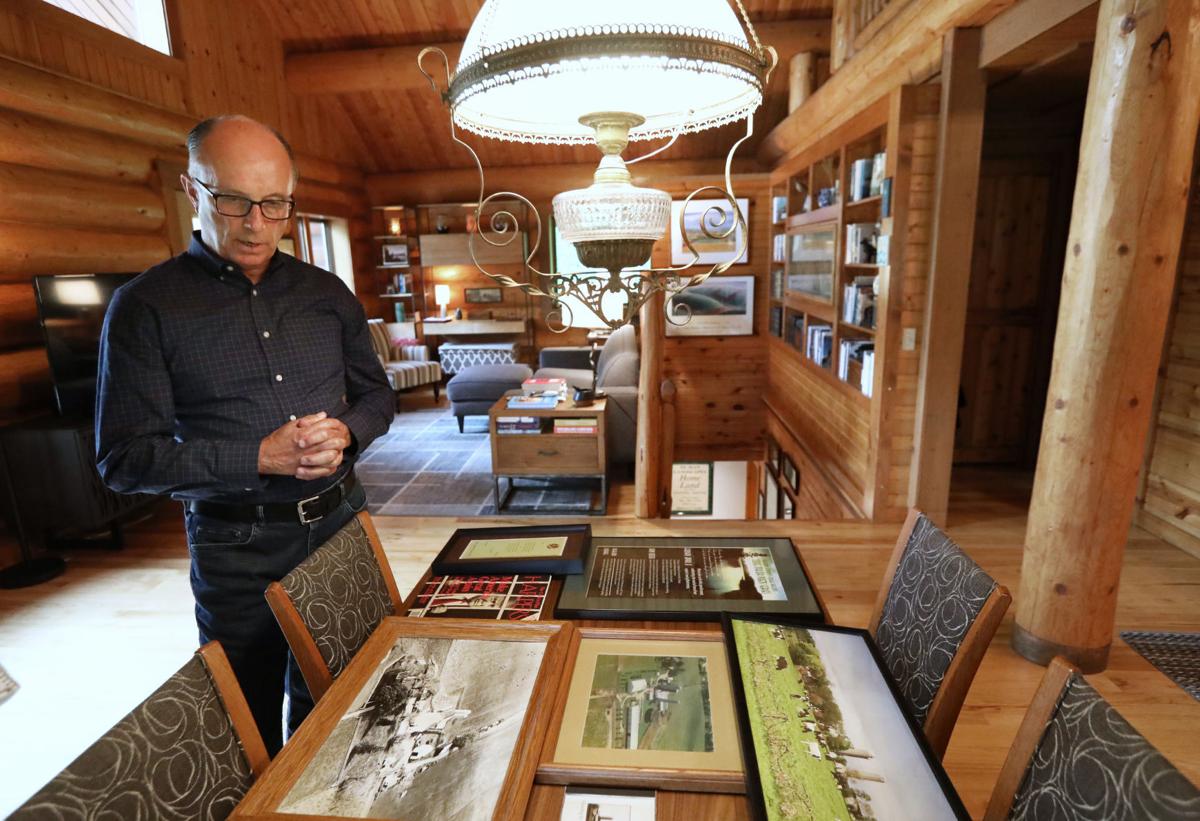 The kitchen table of Dan Smith's home near Arena is covered with photos of his former farm in northern Illinois. Memories are precious for Smith, whose new book of poetry draws on his decades of farming and his experiences as a farm financial counselor in Wisconsin. 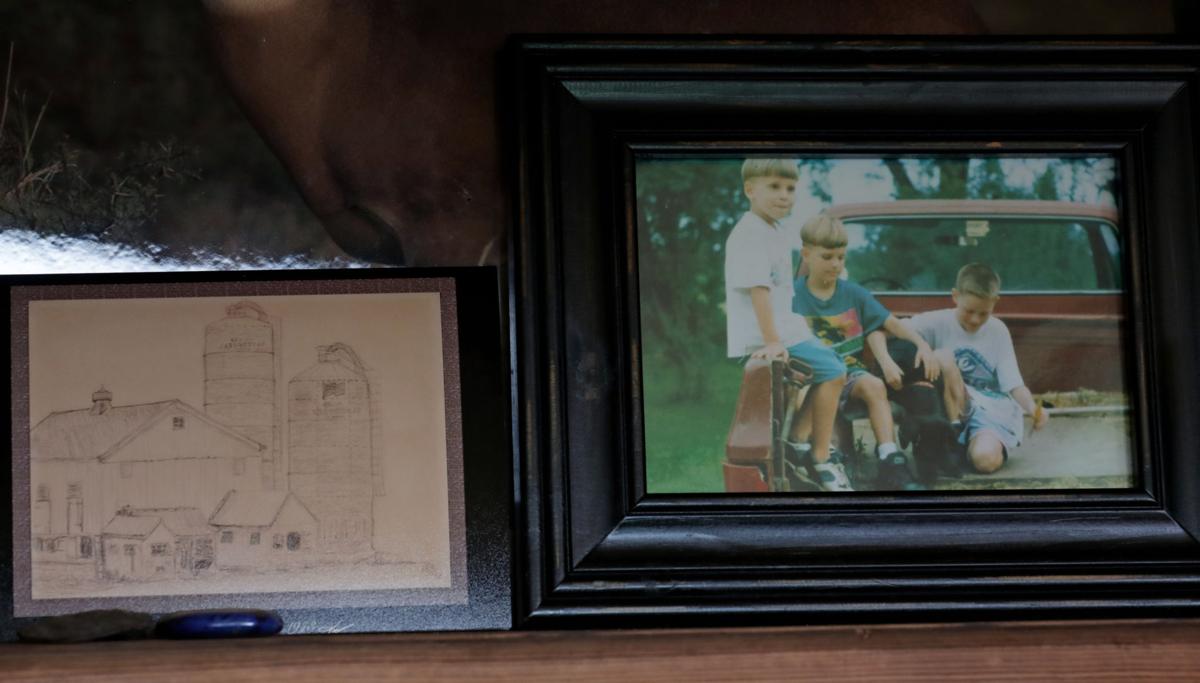 A photo of Dan and Cheryl Smith's boys when they were young is on display next to a sketch of their former dairy farm north of Freeport, Ill., in an office space in their barn near Arena.