Unrest continued in Kenosha on Tuesday night into early Wednesday, turning deadly right around midnight. Here is a look at the story as it unfolded. It includes some graphic videos from Twitter and Facebook feeds.

Kenosha police are now confirming that two people are dead following a shooting amid unrest in the city that began Tuesday night and spilled into early Wednesday.

At about 11:45 p.m. Tuesday police, along with other agencies assisting, responded to the area of 63rd Street and Sheridan Road for reports of shots being fired and multiple gunshot victims, according to a release by Lt. Joseph Nosalik of the Kenosha Police Department.

The shooting resulted in two fatalities and a third gunshot victim was transported to a hospital with serious, but non-life threatening injuries, according to Nosalik. He said the shooting investigation is "active an ongoing."

Names, ages and cities of residence for the victims are still being determined.

Dozens of shots were heard near the intersection of 63rd Street and Sheridan Road late Tuesday night, where Black Lives Matter protesters had gathered, and where a couple earlier scuffles that didn't lead to gunfire occurred between demonstrators and armed individuals.

Beth did not have further details about the incident but said Kenosha Police and the FBI are investigating the fatal shooting.

“The FBI was there helping us tonight, so they’re working together,” he said.

Beth said an outside agency’s law enforcement tactical team picked up one person who was shot and the other walked into Froedtert Kenosha Hospital nearby at 6308 8th Ave.

Kenosha police are calling on anyone who witnessed the shooting to contact the detective bureau at 262-605-5203. Callers wishing to remain anonymous can contact Kenosha Area Crime Stoppers at 262-656-7333. Nosalik said investigators were aware of the social media videos circulating regarding this incident and that anyone who has uncirculated video or photos to contact them.

“One was a fatal shooting, two were injured and I don’t know the severity of the two (injured),” said Beth. “I don’t know if there was more than one shooter or just a single one.”

Beth said the person who was fatally shot was a male, but Beth said he was uncertain whether the male was an adult. He said both the shooter and the male who was killed are white.

Dozens of shots were heard near the intersection of 63rd Street and Sheridan Road late Tuesday night, where Black Lives Matter protesters had gathered, and where a couple earlier scuffles that didn't lead to gunfire occurred between demonstrators and armed individuals.

Gunfire is ringing out in Kenosha in the area of 63rd Street and Sheridan Road. A police officer said, "lots of people shot." What exactly that means has not been confirmed. Reporter on scene is leaving the area at this time for safety.

According to a witness, who talked to a Kenosha News reporter, some guys were telling protesters to stop breaking windows of vehicles and they got mad and charged at a group of people with guns. One guy was shot in the head and appeared unresponsive. He was grabbed and rushed to the hospital that was across the street.

A reporter witnessed a man with a knife running through the crowd, getting chased. No additional information available at this time.

Dumpster lit on fire.  Law enforcement drove off and a scattered group appears to be moving back to the courthouse.

Several violent videos of surfaced of actions going on around the Kenosha County Courthouse.

#kenosha: Police shot teargas at the group, and they responded with gunfire at the Police

#BREAKING: Gunmen prepare to storm the Courthouse in #Kenosha

People post on social media as they graffiti Black Lives Matter.  People are shown on Twitter moving dumpsters. They are reportedly using dumpsters as shields.

A small fire broke out at 58th Street and Sheridan Road, but people who were there for the protest quickly put it out with a small portable extinguisher. One said, "I don't want to see my community burn." Others are starting to break windows by hitting the plywood that was used to protect them, with force. Other protesters are trying to stop them. Tension continues to be high.

People are being pushed North on Sheridan Road, where a type of quasi militia with guns is there trying to help protect property. Tear gas is continuing to be deployed outside the courthouse to try to clear the area.

One person was reportedly injured outside the courthouse. A makeshift stretcher was created to help the person.

Tear gas was being used to try to disperse the crowd outside the courthouse. It was deployed after the county sheriff armored vehicle drove through the crowd.

Pepper balls being shot from the ground and the roof. Volunteer grassroots paramedics are on scene helping protesters. Some protesters are trying to pull down fence in front of courthouse.

There are also snipers on the courthouse roof.

Protesters burn a flag outside the Kenosha County Courthouse on Tuesday evening.

IN PHOTOS: Throughout downtown Kenosha, boarding up

IN PHOTOS: Throughout downtown Kenosha, boarding up

Volunteers fanned out throughout downtown Kenosha on Tuesday, boarding up windows on businesses as far north as Washington Road. Here are scen… 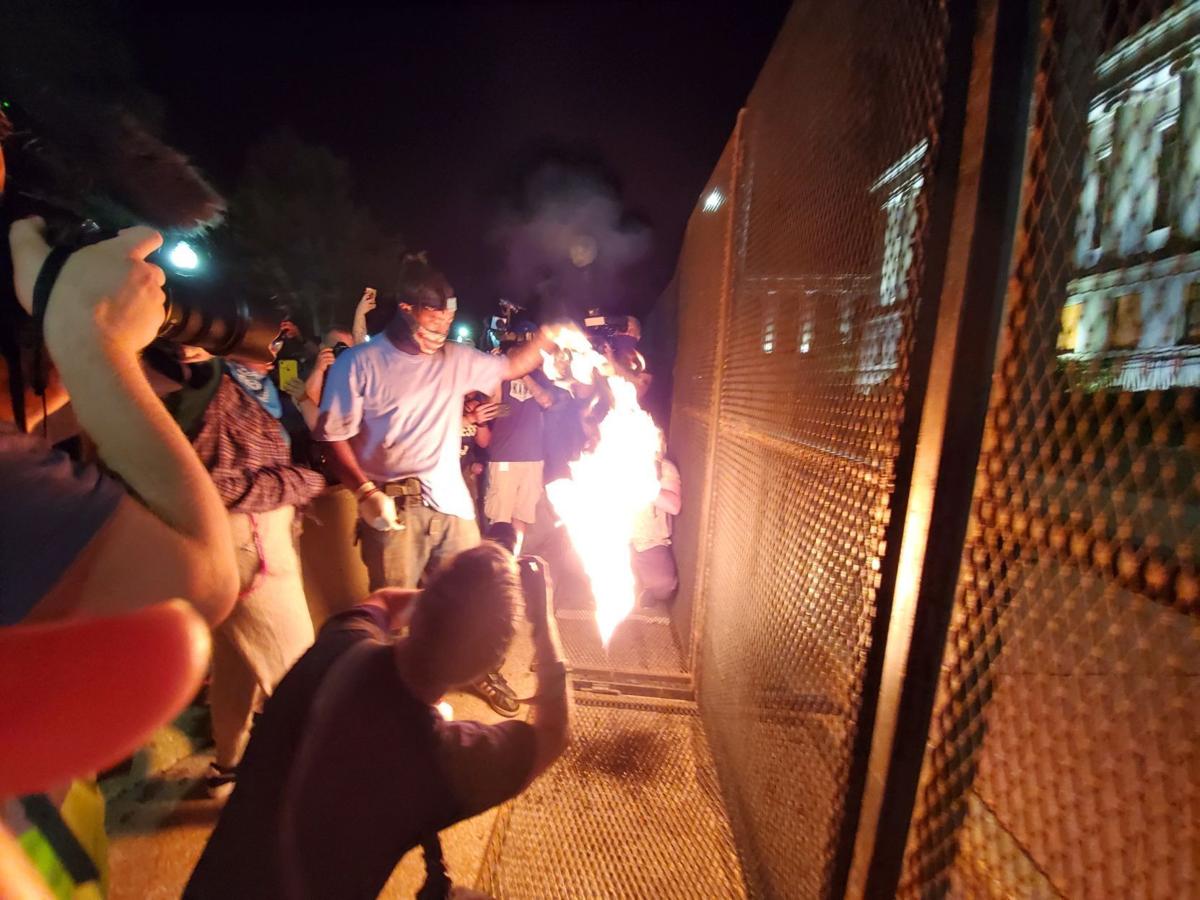 Protesters burn a flag outside the Kenosha County Courthouse on Tuesday evening. 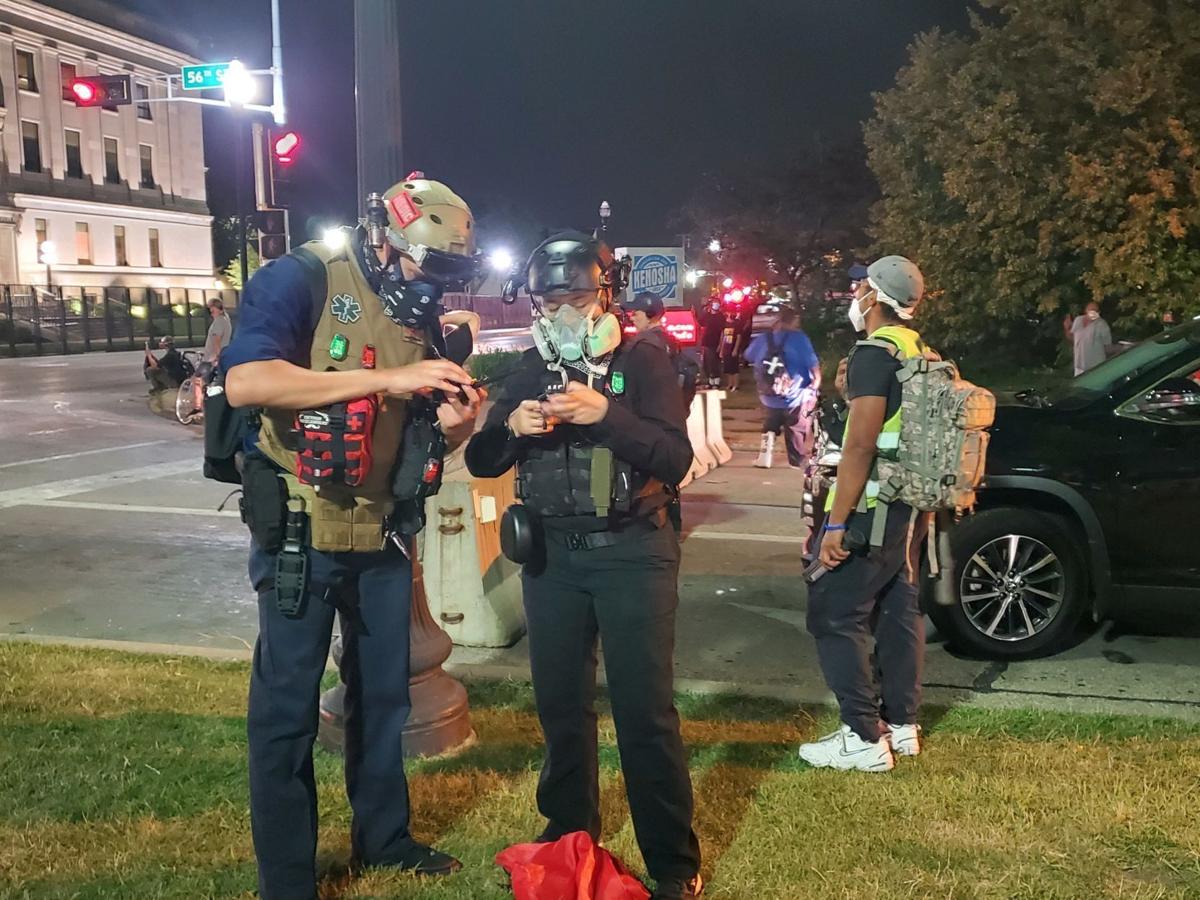