KENOSHA – A peaceful march and rally took place in Kenosha on Saturday asking for justice for Jacob Blake, who was shot on Sunday.

Most of the speakers talked about justice peacefully. But near the end of the rally, one man introduced as "our president" strayed from the message by saying, “If you kill one of us, it’s time for us to kill one of yours.”

The man, who was not able to be immediately identified, said:

“I love being black. I love black people. I know some of you may not want to say that … You tell us how to behave when you have taken our lives. The black man is worth something. His life is worth something. I have to say god damn it – if you kill one of us, it’s time for us to kill one of yours. I know everybody don’t want to hear that. But damn why are we the ones who have to keep burying ours and got to keep clean for you to see us as being human? We ain't never did nothing to nobody.”

Earlier speakers were more focused on social justice and not physical revenge.

Lt. Gov. Mandela Barnes spoke earlier and had a positive message, “I see resilience. I see hope and strength.”

Unfortunately, he said, we are still dealing with the same challenges we dealt with decades ago.

“I say no,” Barnes said. “Justice should be guaranteed to everyone in this country.”

“We are not asking for much, Barnes said. “We are just asking them to live up to their word. That is not too much to ask.”

“There were seven bullets put in my son’s back,” Blake said. “Hell yeah. I’m mad.”

He said when he was in the hospital with his son, his son grabbed his hand. 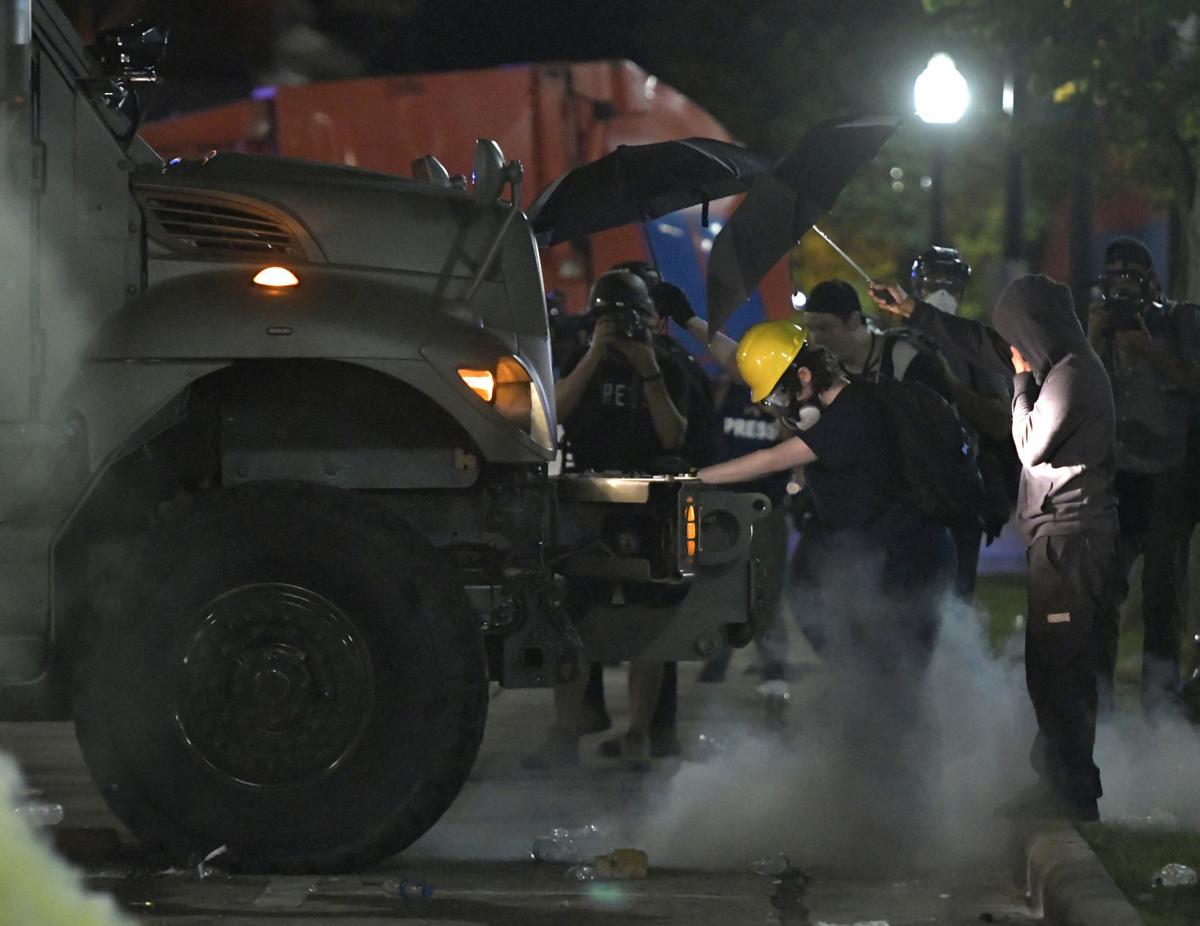 A woman stands in front of an armored vehicle at Civic Center Park on Tuesday, Aug. 25, 2020. 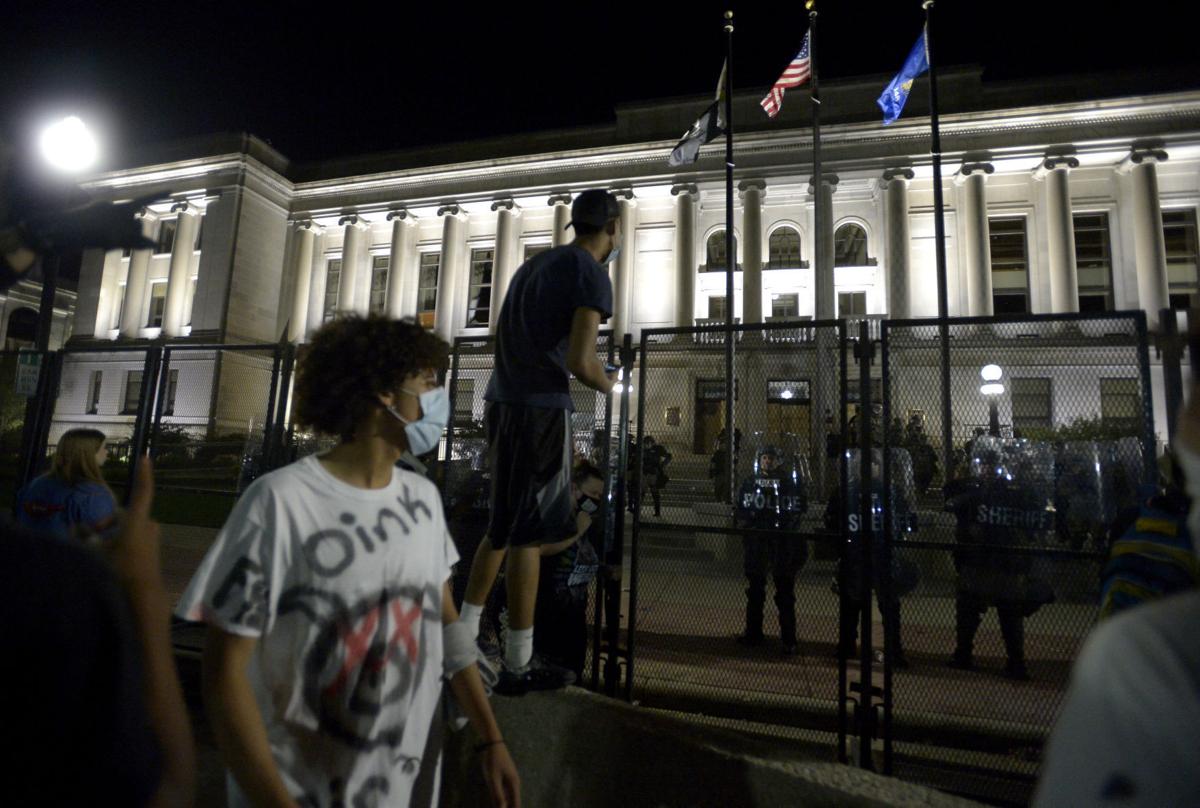 Protestors gather in front of the courthouse on Tuesday, Aug. 25, 2020. 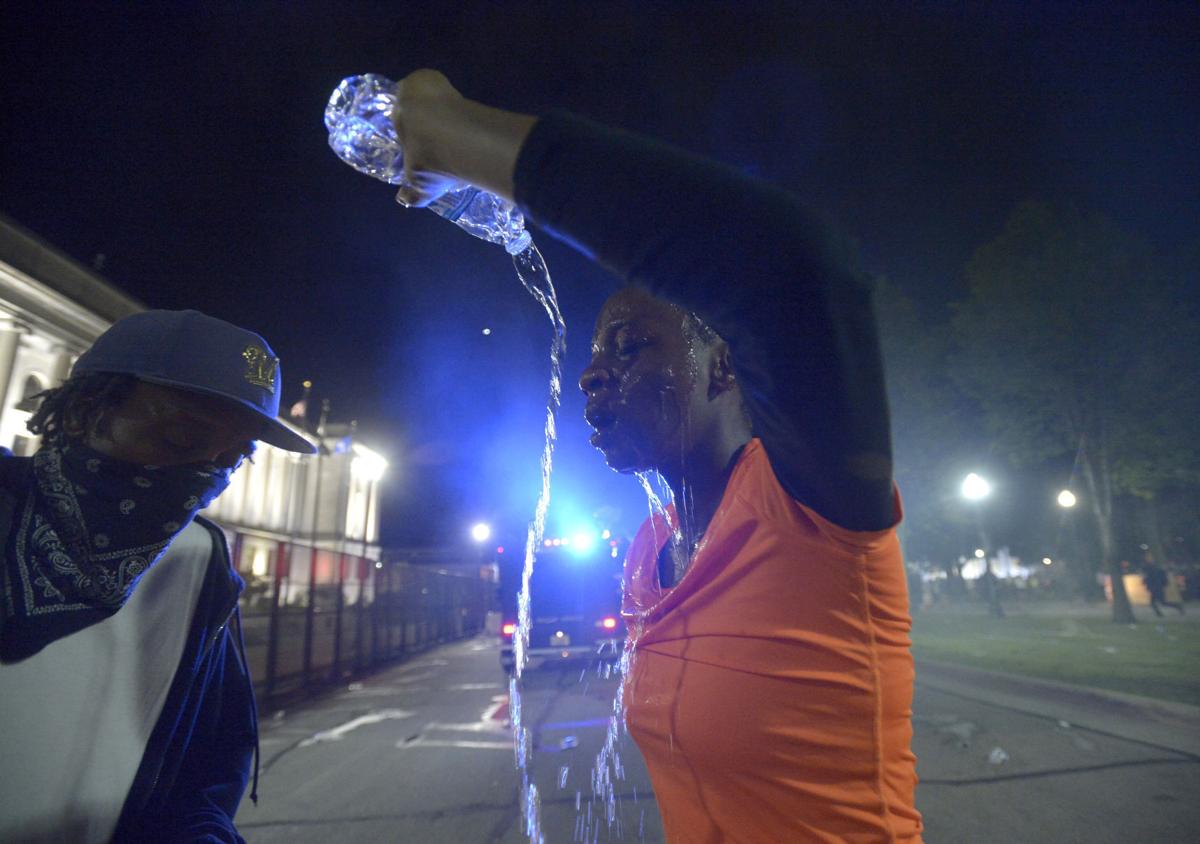 A woman douses her face with water after inhaling tear gas and being bit with a firework on Tuesday, Aug. 25, 2020. 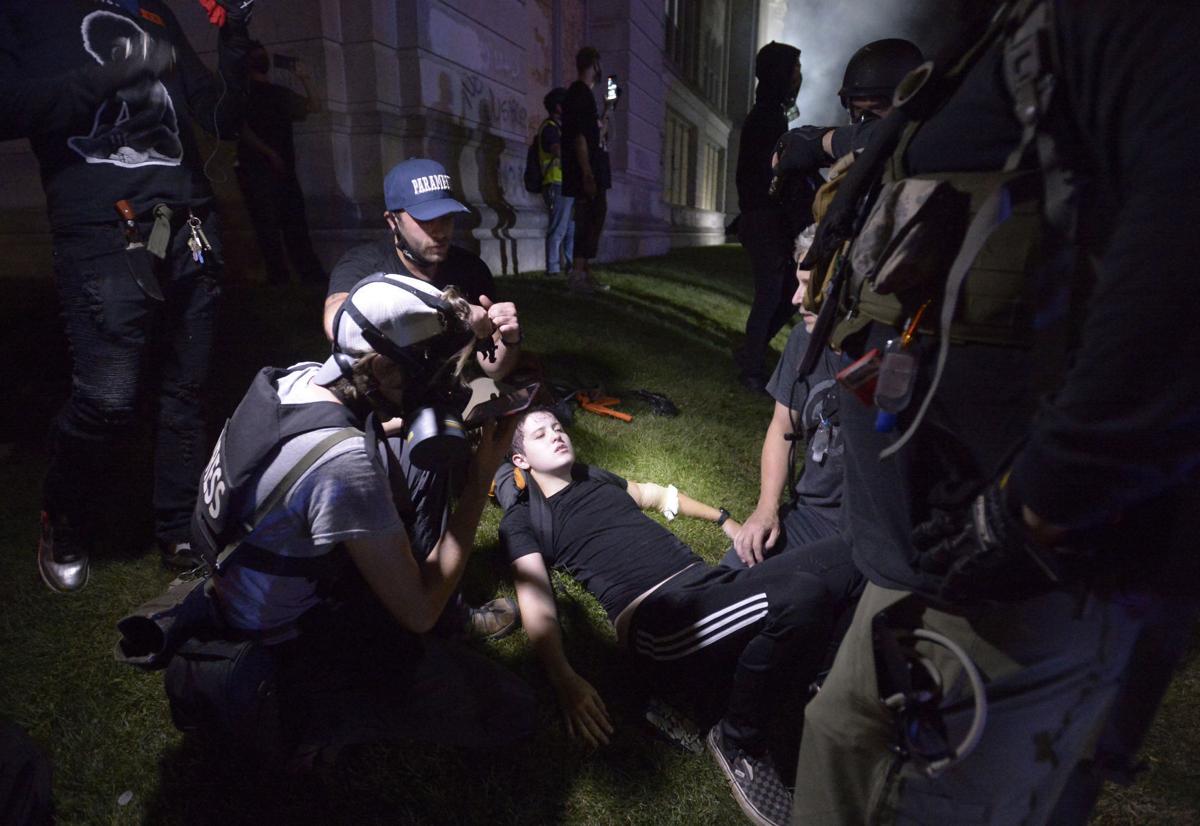 A woman bleeding from the head after getting hit with a rubber bullet is looked over by medics on Tuesday, Aug. 25, 2020. 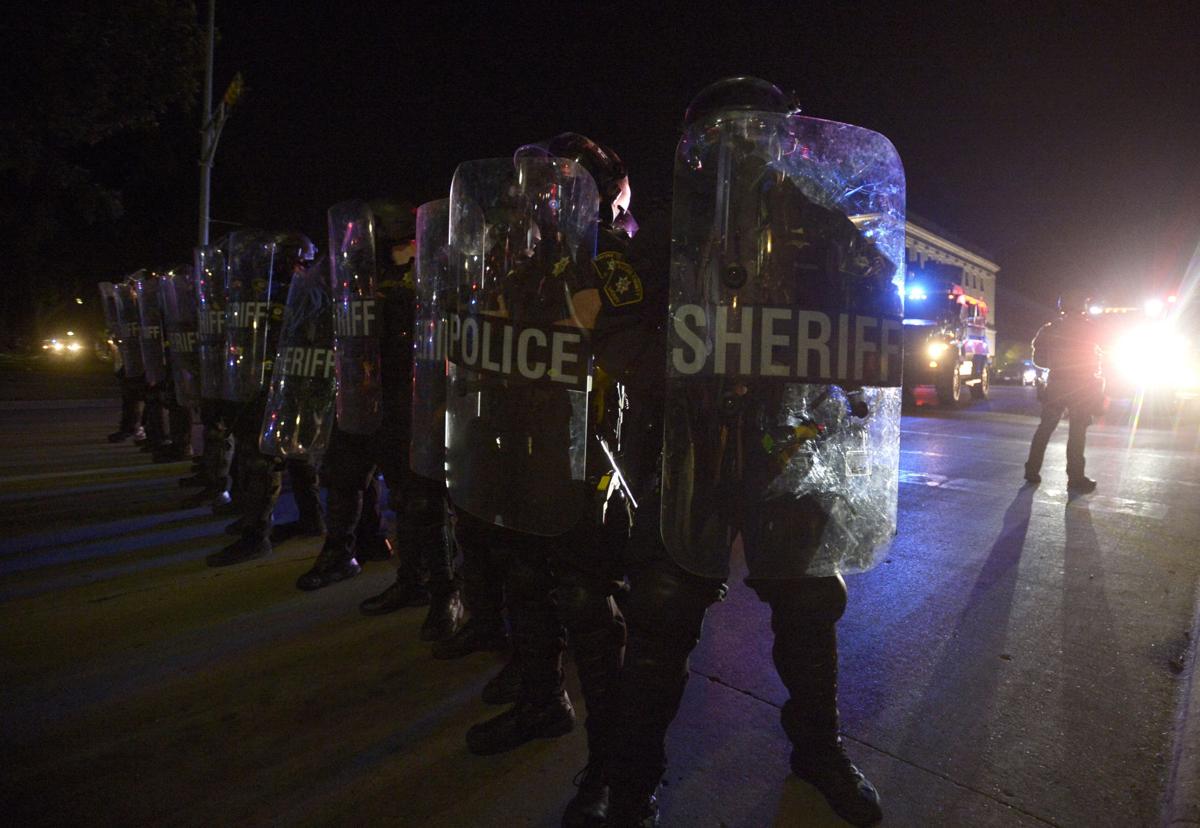 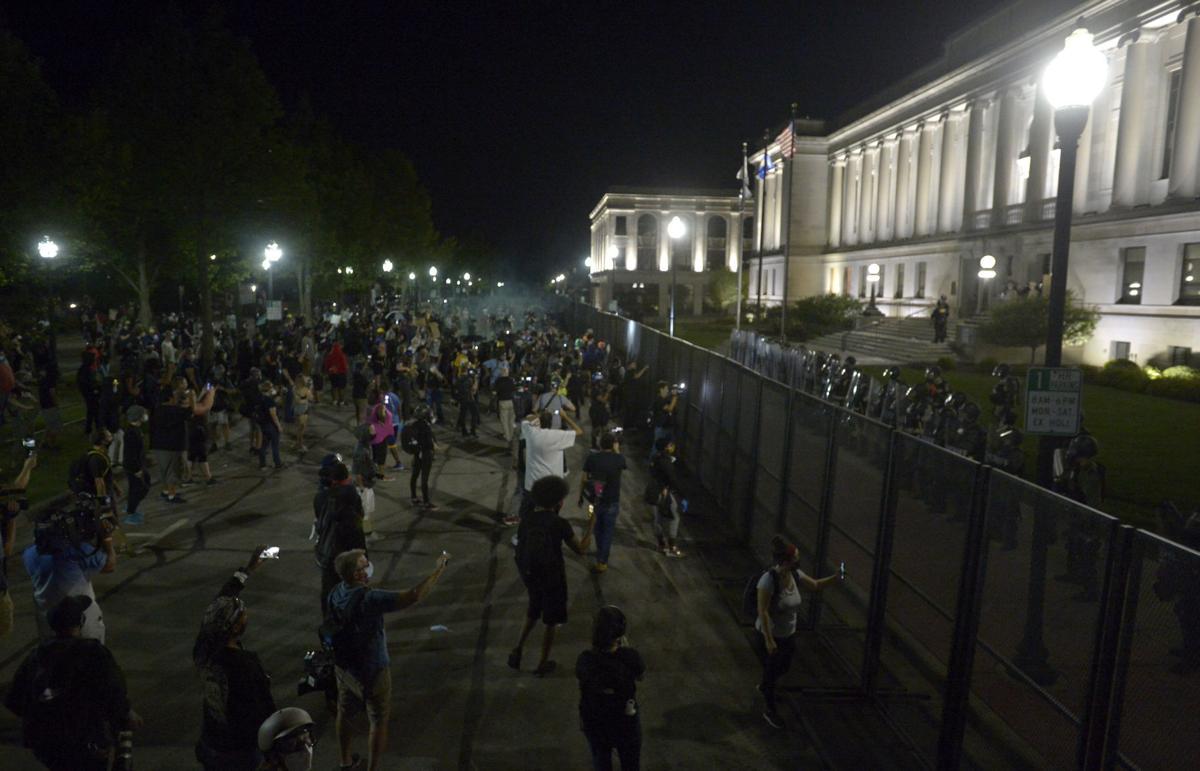 Demonstrators gather at the courthouse on Tuesday, Aug. 25, 2020. 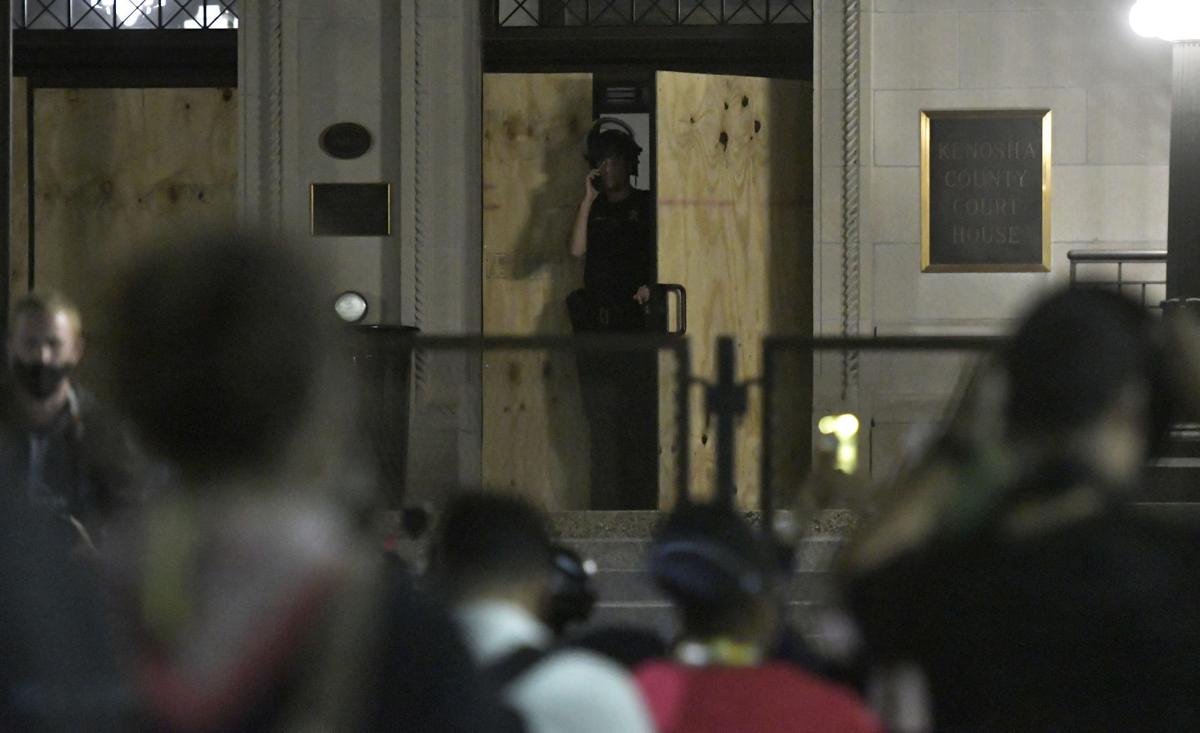 A member of law enforcement looks out the courthouse doors upon the demonstrators on Tuesday, Aug. 25, 2020. 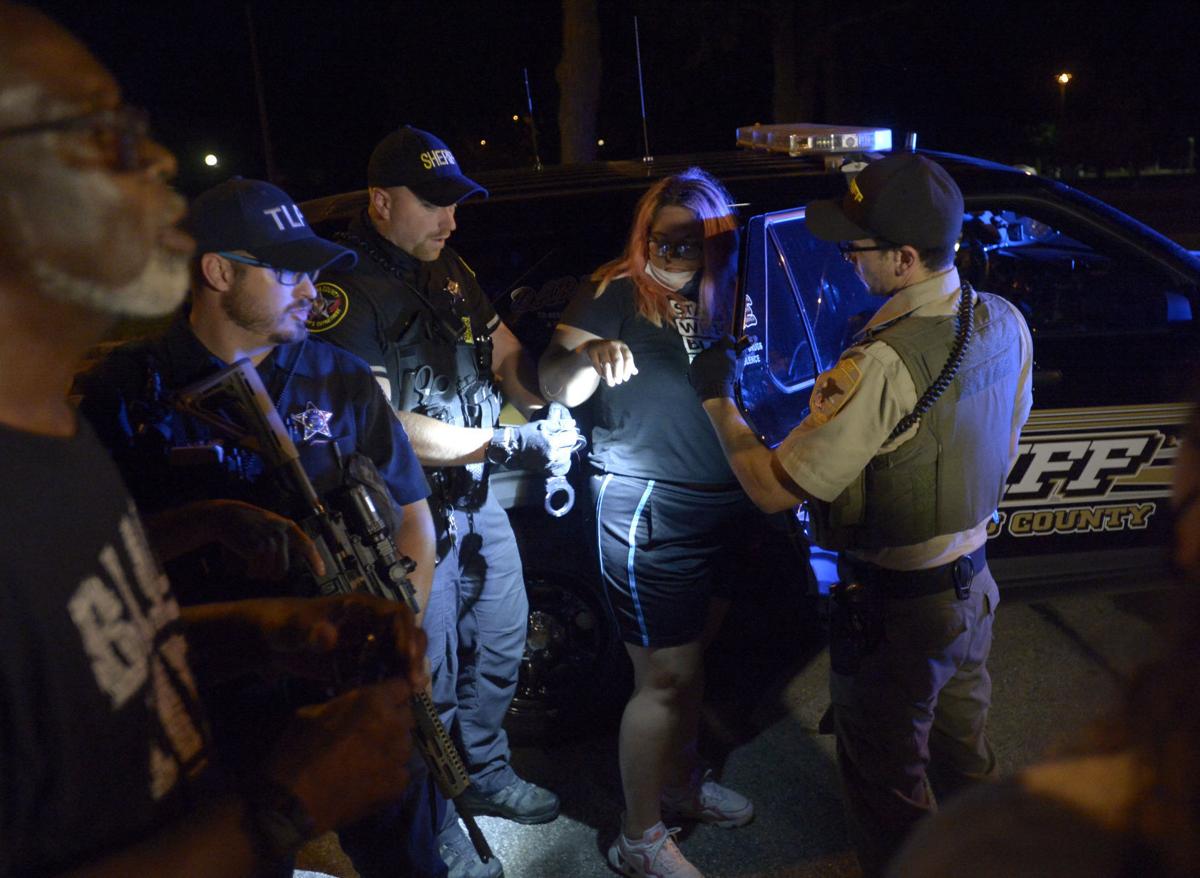 A woman is released from handcuffs after she two others were detained by law enforcement near Library Park on Thursday, Aug. 27, 2020. 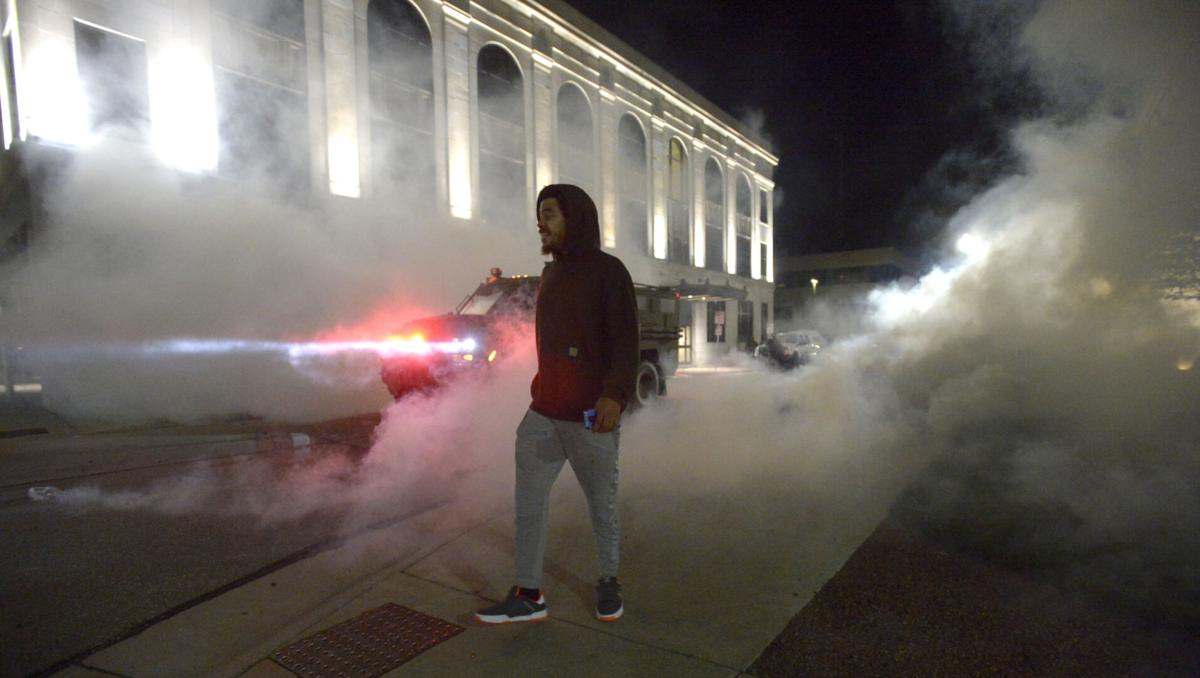 A man walks through tear gas deployed by the police. 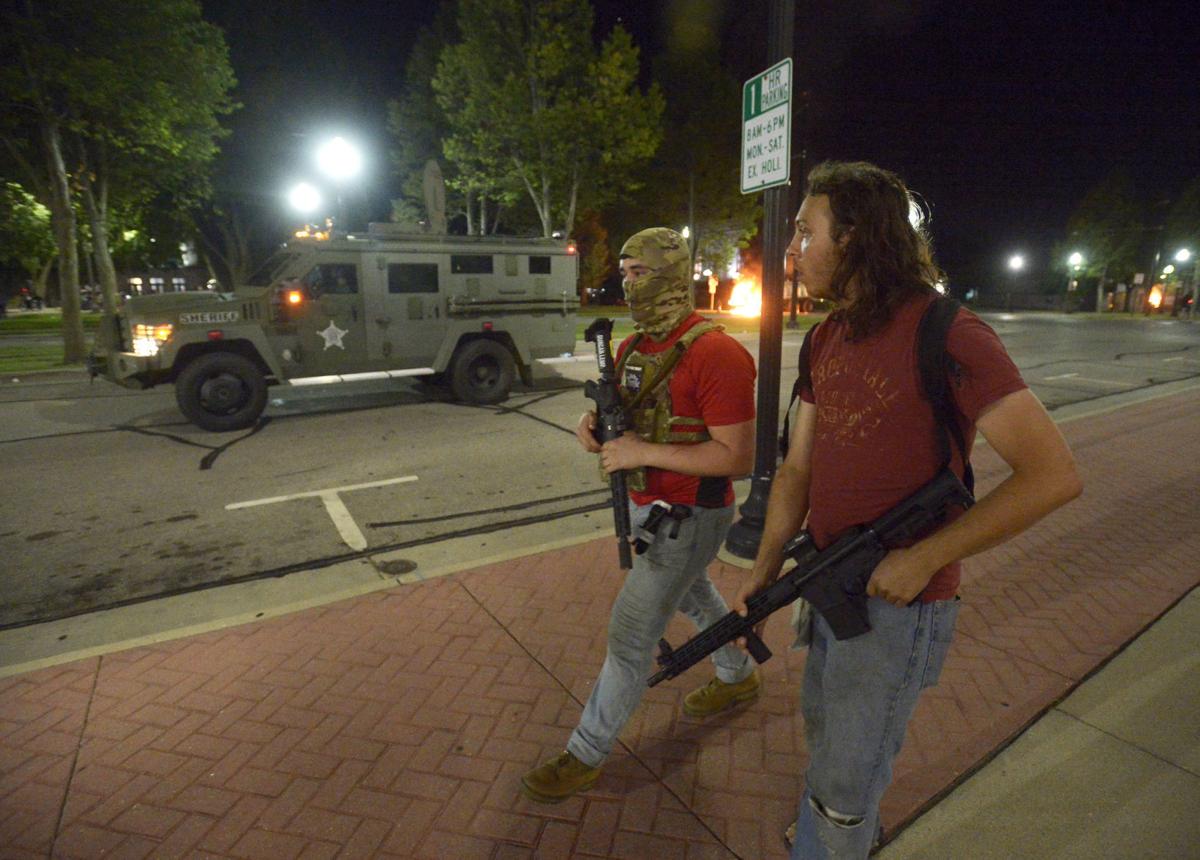 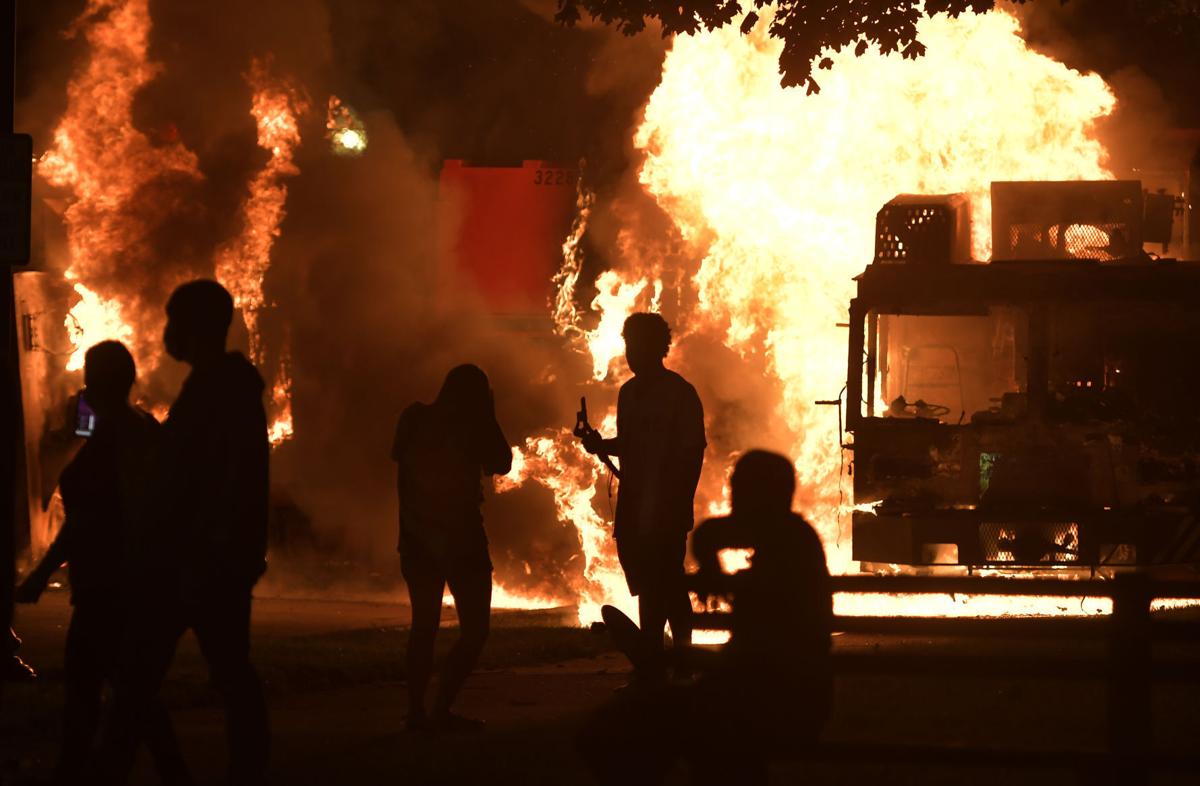 A man stands in defiance as the police department advances.

Demonstrators crowd around an armored vehicle at Civic Center Park on Tuesday, Aug. 25, 2020. 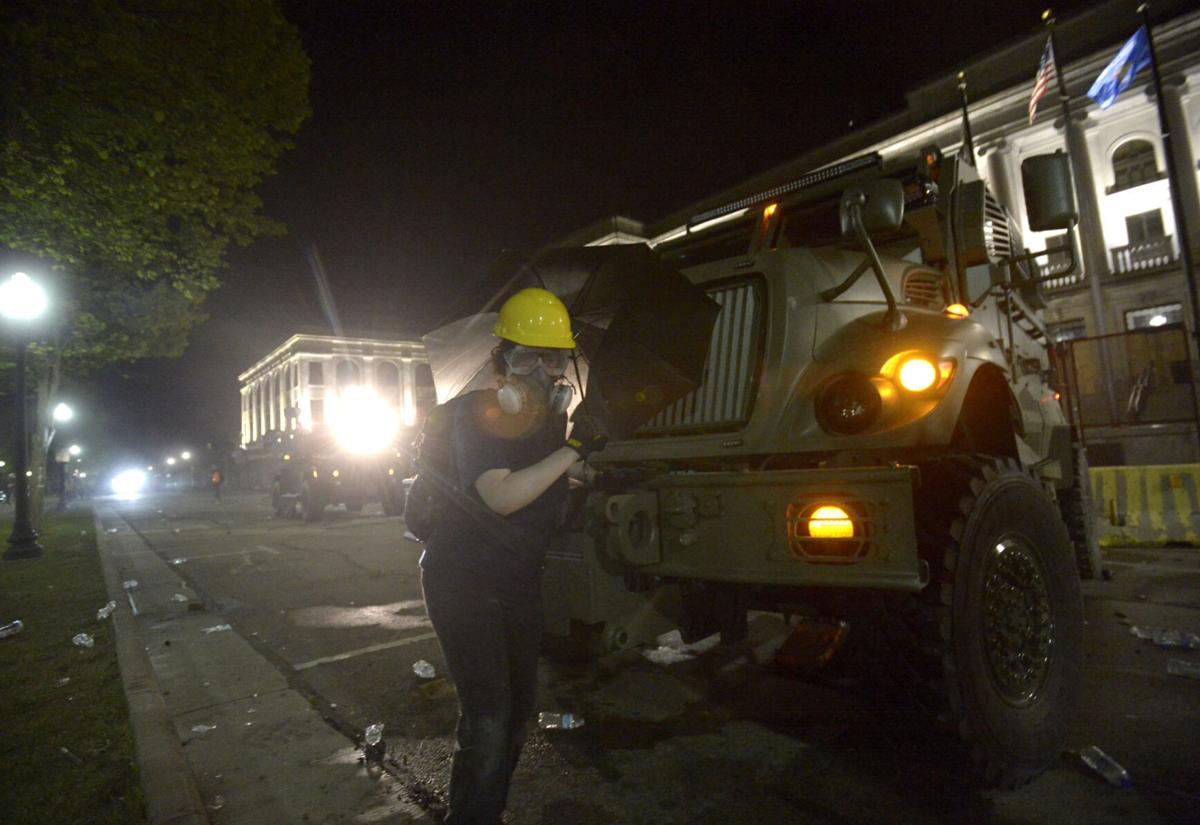 A demonstrator stands in front of an armored vehicle at Civic Center Park on Tuesday, Aug. 25, 2020. 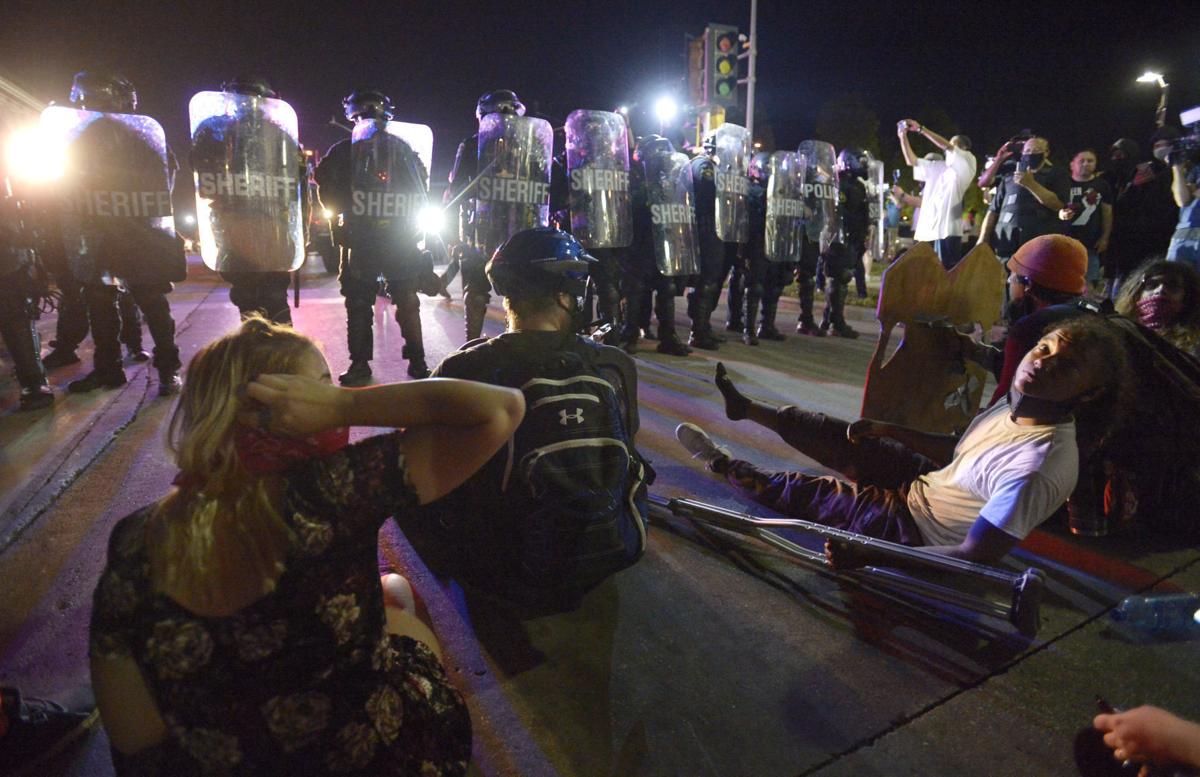 Demonstrators sit on Sheridan Road in front of a line of law enforcement after being forced to leave Civic Center Park on Tuesday, Aug. 25, 2020. 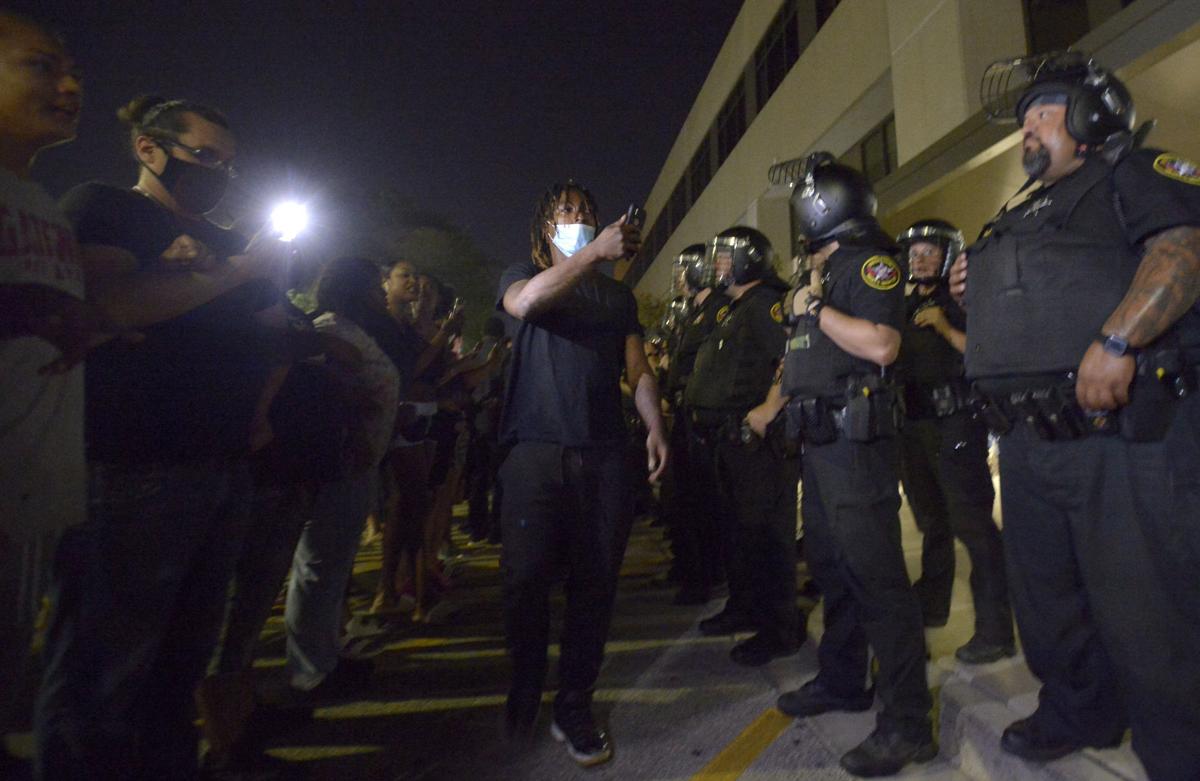 A man walks between demonstrators and the police in front of the Public Safety Building on Sunday, Aug. 24, 2020. 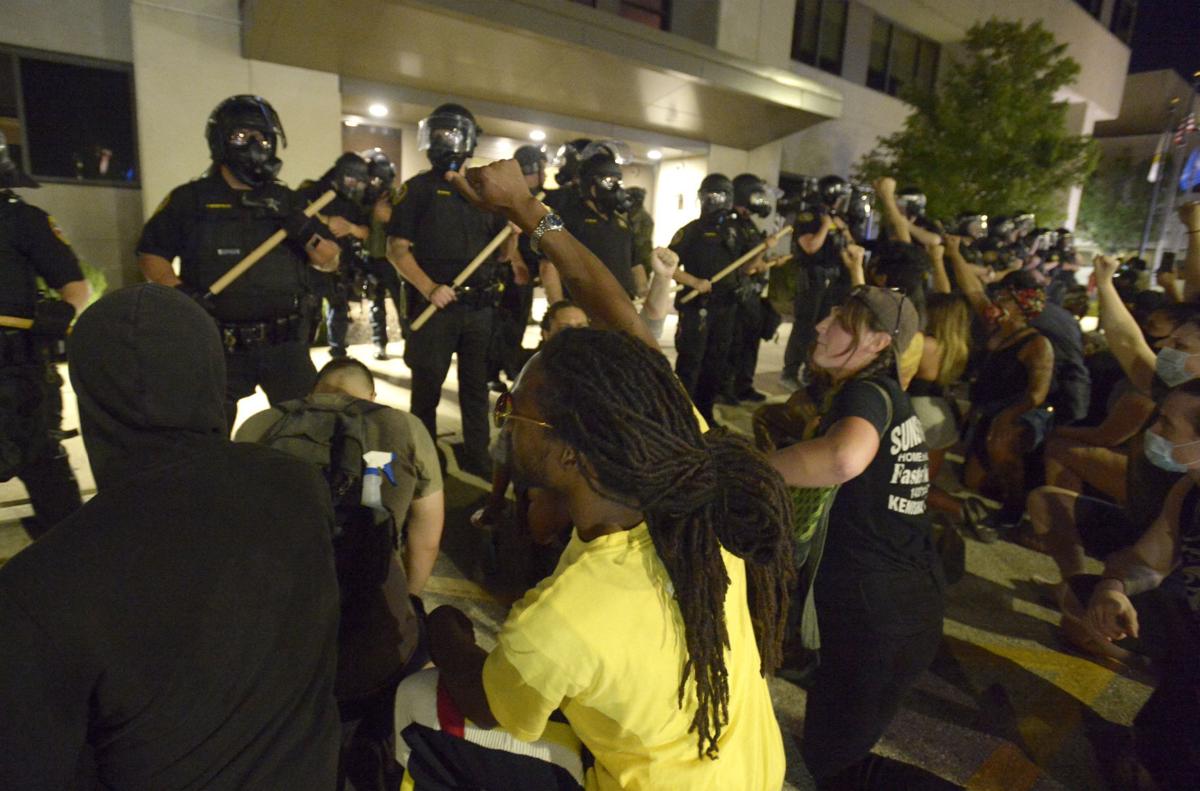 Demonstrators take knee in front of a line of police at the Public Safety Building on Sunday, Aug. 24, 2020. 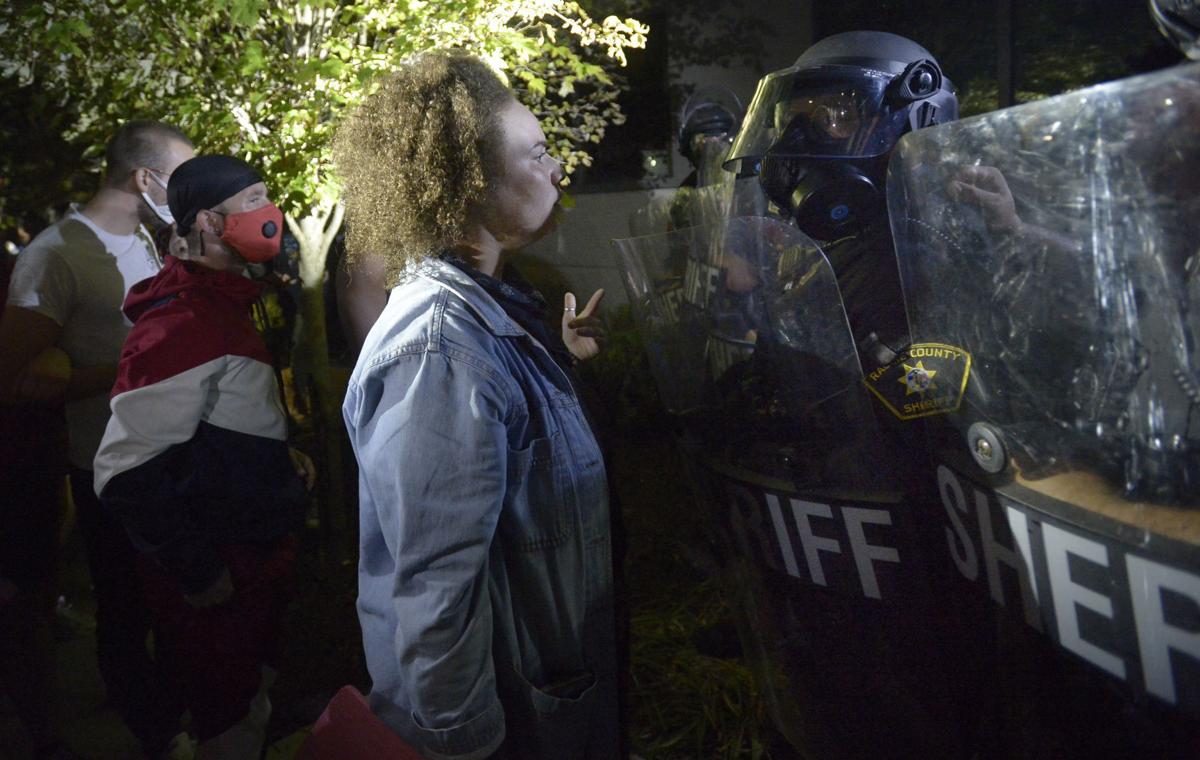 A woman confronts a police officer at the Public Safety Building on Aug. 24, 2020. 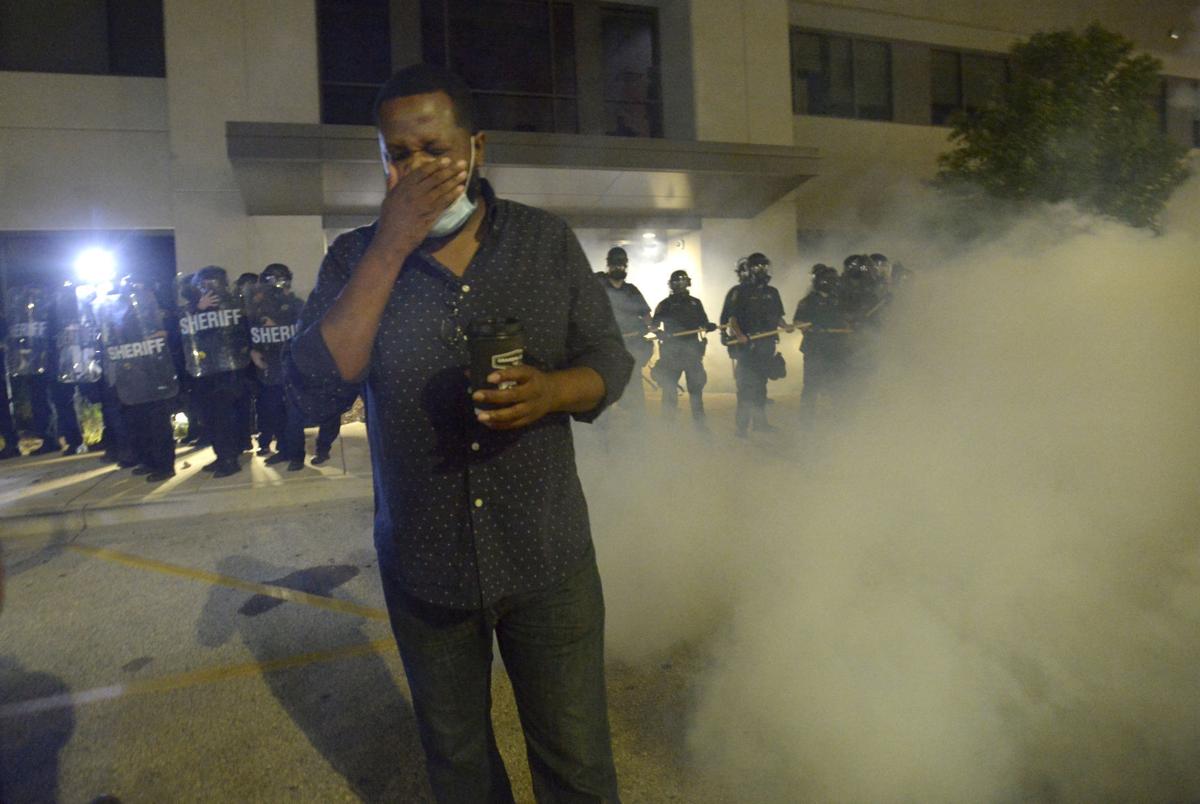 Alvin Owens covers his face after the police deployed tear gas at the Public Safety Building on Sunday, Aug. 24, 2020. 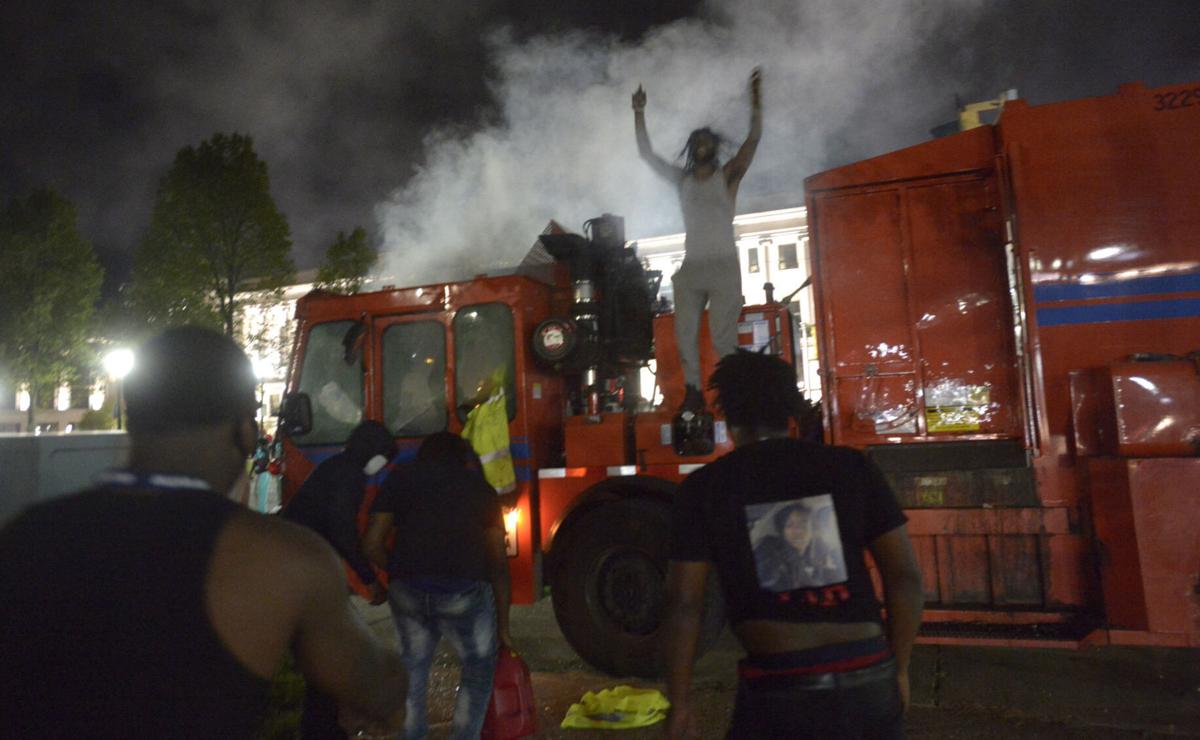 Rioters cheer as a garbage truck is lit on fire. 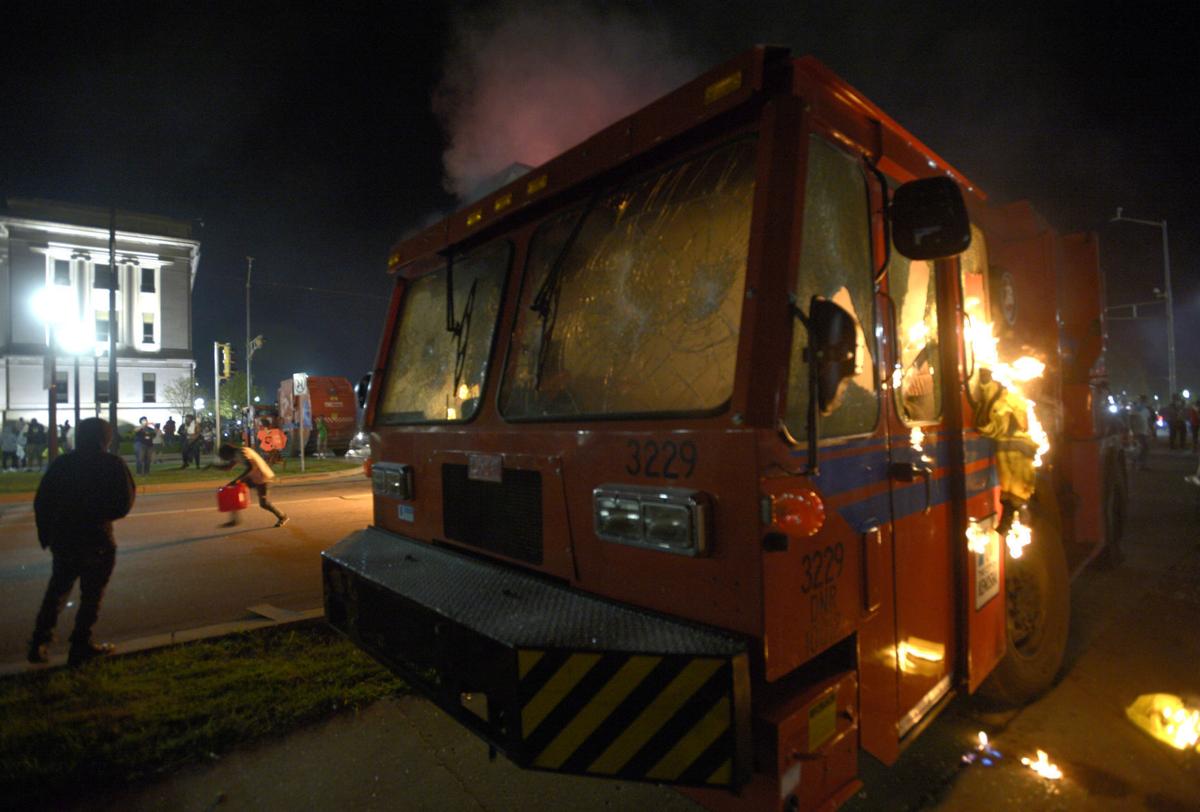 Garbage trucks were set ablaze in front of the courthouse on Sunday, Aug. 24, 2020. 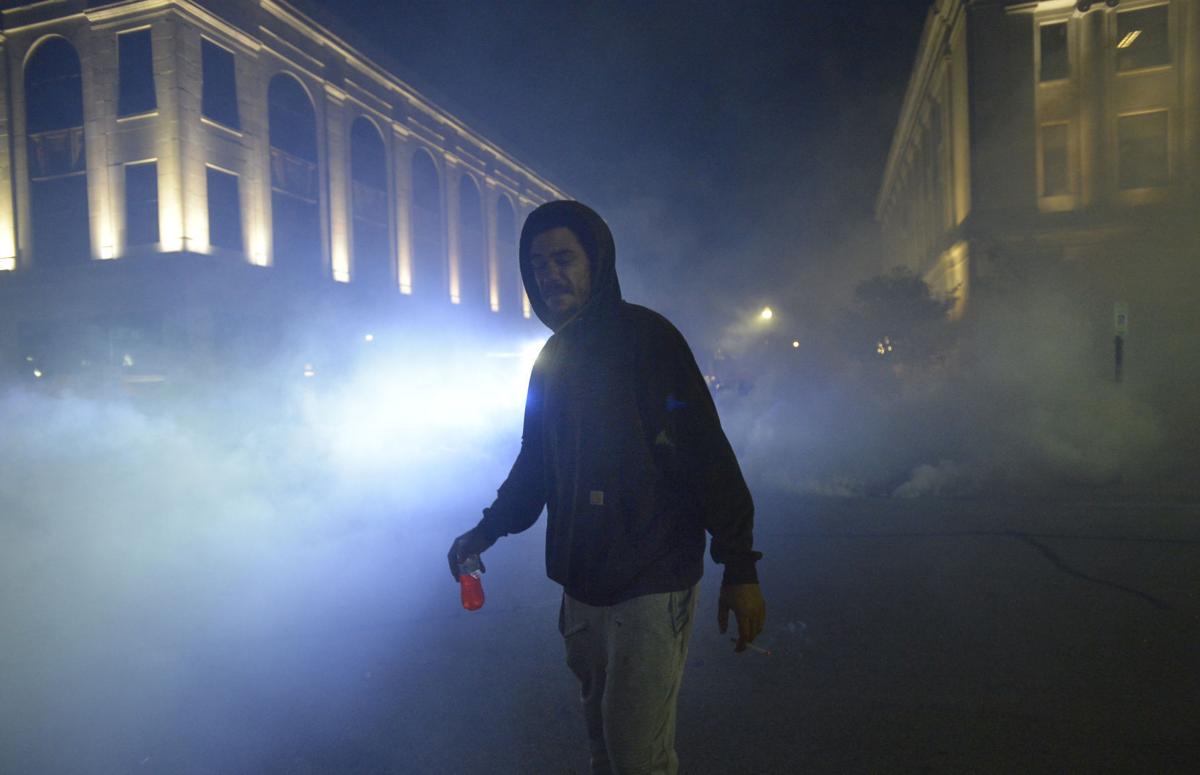 A man emerges from tear gas deployed by the police department. 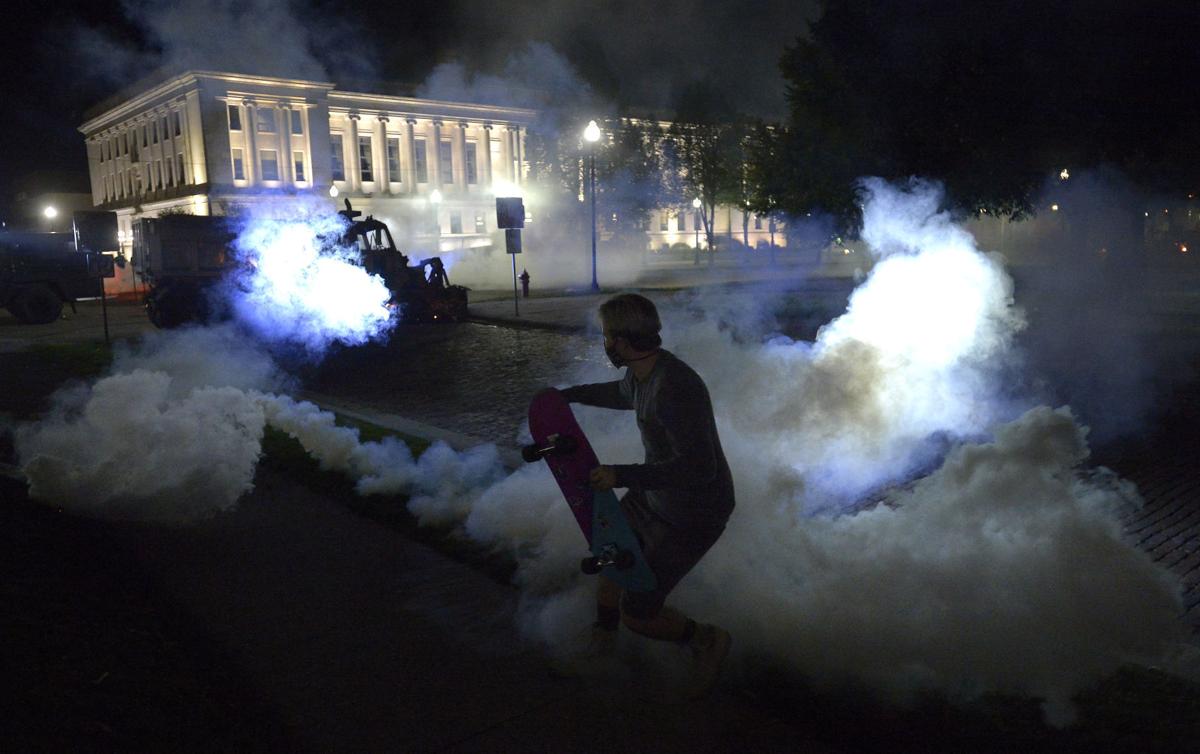 A man kicks a tear gas canister back at the police.

“He said daddy, daddy I love you,” Blake said. “Then my baby said, ’Why did they shoot me so many times?’ I said, ‘Baby they weren’t supposed to shoot you at all.’”

He continued by saying, “I know there are a lot of parents out there in this crowd. You cannot imagine what it feels like to look at your baby paralyzed from the waist down, shackled.”

He has since had the handcuffs taken off, but he was shacked to his bed until bail was paid on a past case.

Blake continued, “We suffered and still suffer because there are two justices systems.”

He said there is one for the white boy who walked down the streets and killed two people referring to Kyle Rittenhouse, accused of killing two people on Tuesday night during protests near Kenosha’s downtown. Then, he said, there is another system for his son, Jacob Blake, who was shackled to a bed after police shot at him seven times.

“That justice system doesn’t work out well for us,” Blake said.

IN PHOTOS: 'Justice for Jacob' march and demonstration

IN PHOTOS: 'Justice for Jacob' march and demonstration