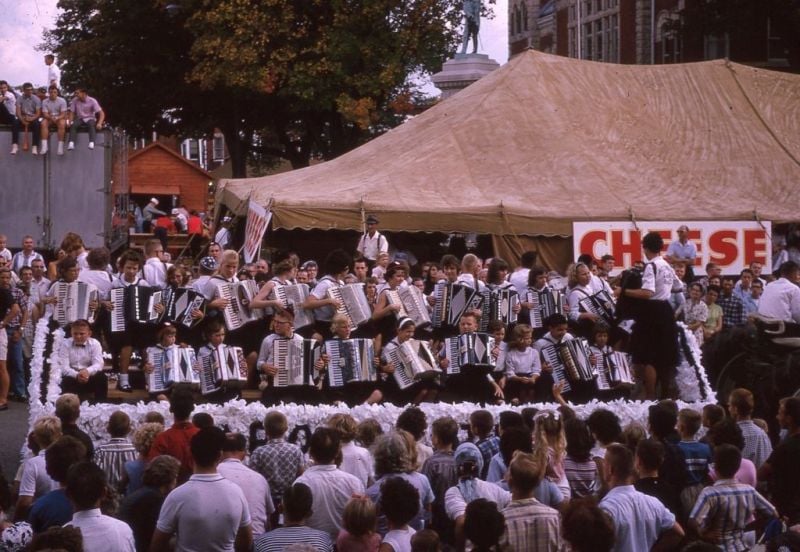 A group of accordion school students perform at the Green County Cheese Days parade in 1965. 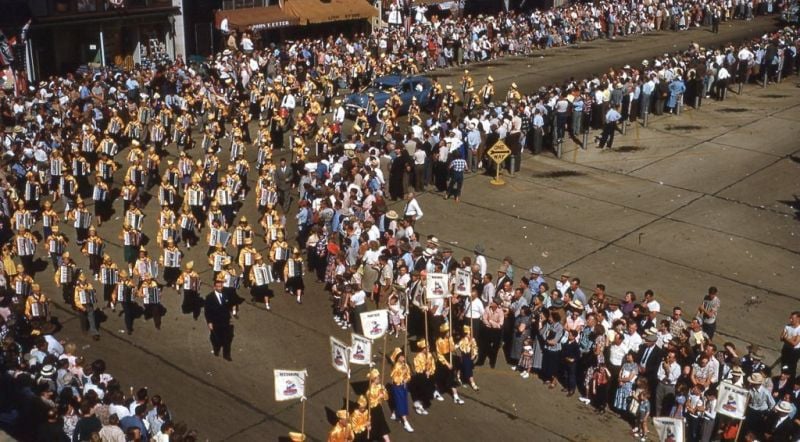 The 1950 Cheese Days parade had accordionists from Reedsburg, Portage, Dodgeville and Baraboo, among others, with its own color guard.

Welcome to Monroe, where’s your accordion?

There has always been an accordion wheezing in the background in the 100 years Monroe has hosted the Green County Cheese Days festival.

This year, because it’s the 100th (year, not festival, which had a somewhat spotty appearance schedule in the beginning), organizers are hoping to sneak 100 accordionists — and their chesty instruments — into the city for the festival, scheduled for the third weekend in September.

“We are going to give this search our best shot,” said Noreen Rueckert, Cheese Days coordinator and Green County tourism director.

Rueckert said it is good to get the search going early because “that gives people time to learn the music,” which is available to print from the festival’s Facebook page.

Also time for relatives and friends to lean on their closet accordionists and coax them into the public light for one shining moment on Sept. 20, joining the Monroe City Band, concluding its annual Cheese Days concert with a combined rendition of “Come to Cheese Days In Monroe.”

Randy Schneeberger, retired school music teacher and director of the city band, said they should be able to muster even more than 100 to play the Pat Barnard-orchestrated music.

“There have to be at least 100 accordion players within 100 miles of Monroe,” he said, adding “there are a lot of people here who play but don’t admit it.”

Rueckert, who is preparing a 100-year commemorative book on the festival, said accordion music has been part of the festival for a long time, noting the parade once featured large contingents of school accordion students, some filling parade floats, others marching and playing.

Legendary accordionist Rudy Burkhalter — “all of his classes marched in the parade” — was the catalyst for accordionism in Monroe. He also adapted the official anthem from a Swiss folk song.

Schneeberger said he is working on a plan for the accordionists’ orderly descent on the concert’s main stage, probably after assembling in groups of 10 or 15 to stroll the streets. He welcomes all skill levels: “You don’t have to be an expert, you could learn just the right hand, or just the left, or even just fake it,” he said.

Cheese Days was inspired in 1914 after five Monroe businessmen visited Sauerkraut Day in Forreston, Ill., and were so impressed they organized the first Cheese Days in just 19 days. Even then it attracted more than 3,000 people who ate more than 3,000 cheese sandwiches.

Rueckert, in a series of “Cheese Days flashbacks” on the Facebook page, noted that the musicians were shorted at a previous festival, in 1955, in what might be a year of accordion infamy: That was when “two-hundred accordion players were set to appear in the parade, but only thirty took part as many feared the rain would damage their instruments.”

Accordions have pretty much disappeared from the parade circuit, though there was a small resurgence in 1998 when Rita Benish of Sun Prairie organized the Wisconsin Squeezecentennial Marching Band, a spirited amateur group of musicians. They were dedicated to performing for the state’s sesquicentennial, and the group became a popular parade participant.

Rueckert reminded accordionists who might be a little rusty that Turner Hall of Monroe hosts a “squeezebox night” on the third Tuesday of every month: “This would also be a great opportunity to meet some of the others who will be part of the 100.”

Are prices headed up or down? Where are the hotspots for buyers and sellers? Find out with these charts and graphs, updated weekly.

Is our economy doing better or worse? See recent changes in local employment, small business revenue and more in these regularly updated charts and maps.

A group of accordion school students perform at the Green County Cheese Days parade in 1965.

The 1950 Cheese Days parade had accordionists from Reedsburg, Portage, Dodgeville and Baraboo, among others, with its own color guard.