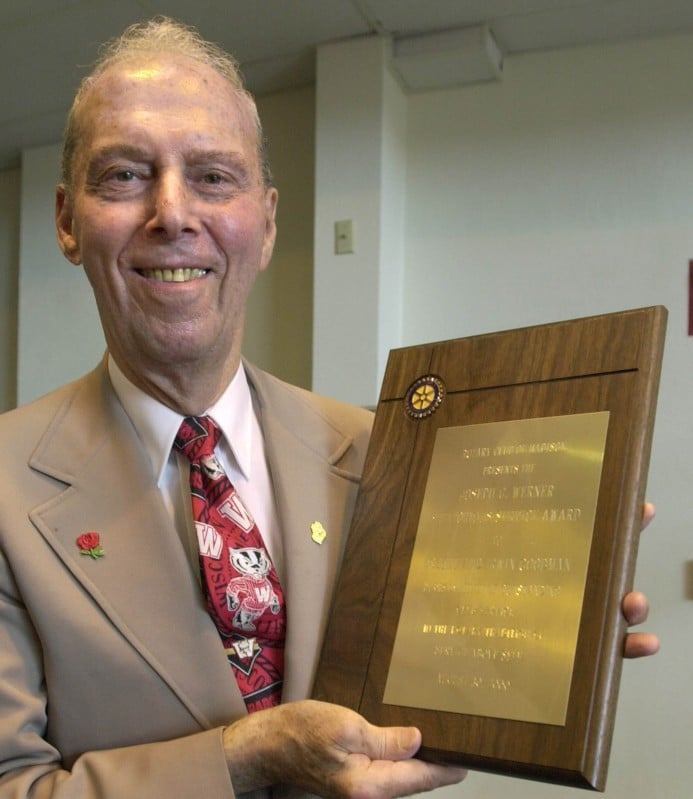 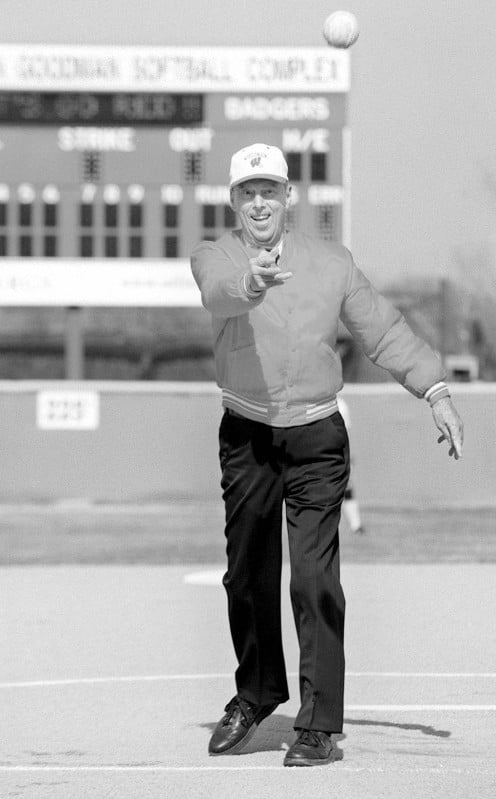 Robert Goodman throws out the ceremonial first pitch at the 1999 opening of Goodman Diamond for the University of Wisconsin women’s softball team. Goodman, a serial philanthropist who died Thursday at 90, was a legendary fastpitch softball player in Madison.
GEORGE HESSELBERG | 608-252-6140 |

Robert Goodman, 90, who with brother Irwin changed the face of Madison by bringing a smile to it, died Thursday.

Of the two, "Bob" was the talkative, gregarious one, the one without the glasses. He told "groaner" jokes, played softball, kept track on an index card of a customer's monthly payments for an engagement ring, and with his brother gave away money because it was the right thing to do.

The Goodmans lived frugally so they could give millions of dollars to charitable causes in Madison, where their generosity encompassed the highly visible — a municipal swimming pool, a community center, a university softball field — and the easily overlooked but highly valued: $20,000 for swimming lessons for the poor, $2,000 for the Capital City Band concerts, $1,000 for a golf outing for disabled students.

The Goodmans operated Goodman's Jewelers at 220 State St., from 1937 until their retirement in 1998. Robert was the talker, while Irwin operated more behind the scenes. Privately, they lived together in an apartment on West Wilson Street, never married and had no children. They were rarely seen apart, eating together, going to movies, watching their Mr. Bean tapes, and choosing causes to support.

"Robert was the extrovert, Irwin was the introvert," said Becky Steinhoff, director of the Goodman Center, a bustling community building on Madison's East Side.

"They decided when they were relatively young that they would be philanthropists, and not rich people," she said. "They got good advice and prospered and everything went back into the plan to do things the way they did for other people," she said.

'Be kind and honest to people'

Robert joined Irwin in the family jewelry business and also at the University of Wisconsin in Madison in 1939. Robert had been sent by his parents to St. Paul, Minn., for high school at St. Thomas Academy, where he earned 14 letters in five sports. On the advice of his brother, he transferred from the University of Minnesota to UW-Madison, beginning a fast-pitch softball career that landed him on a "best ever" team for Madison.

Both brothers were athletes and promoters of healthy lifestyles, an attitude reflected in their frequent donations to the UW-Madison athletic, nutrition and exercise programs.

With their inclusive philosophy about giving, it was the rare civic event that did not include the Goodmans on its list of sponsors. They spent decades avoiding the limelight for those activities.

As the United Way's Leslie Ann Howard put it simply in 2007, in accepting an award on behalf of the Goodmans: "Be kind and honest to people."

That thought was behind every gesture, large and small, mostly anonymous or filtered through a charitable organization, usually preceded by discrete solicitation of advice, longtime friends of Bob Goodman said Friday.

The United Way of Dane County served as adviser and vessel for the Goodmans. The same philosophy that convinced the brothers to donate more than $2 million for a municipal swimming pool was applied to gifts in the past year through United Way: $2,500 to the Combat Blindness Foundation, $2,000 to support students interested in technology, $2,000 for some Edgewood College students to visit the national Holocaust Memorial Museum.

The Goodmans were personally involved in every donation, said Steve Morrison, executive director of the Madison Jewish Federation.

"In the early days, most of what they did, they did anonymously," Morrison recalled Friday.

"I would say, ‘Maybe we could name something for you,' and they would say, ‘No, no, let's just let people know that the project is under way.' It took a while for them to realize that letting their name be used was very motivating for other people," Morrison said.

Steinhoff also noticed that the brothers were careful about "due diligence."

"Before they made a decision to invest, they had to be comfortable with who the players are," Steinhoff said.

"They were incredibly humble, sweet and truly generous. They had truly made a decision to live modestly so they could make incredible gifts to the community, it was what made them happy," she said.

Bob and Irwin Goodman would come to the United Way with specific assignments, to respond to requests, or to respond to something they had read in the newspaper, said Nan Cnare, a United Way vice president.

United Way staff would join the brothers at the movies, Cnare said, or at the Ponderosa Steak House on the West Side, where the vegetarian brothers would be feted with a special rice and beans feast.

"It was very clear they viewed this community as their extended family," said Morrison, "and for them, family members always took care of family members."

They would constantly probe for cracks that needed to be filled, he said.

"They would ask, what do you think we should be working on, or be involved in, and then I would find out they had the same conversation with a dozen other people. They were doing their research, making sure what they thought sounded like a good idea, really was," said Morrison.

More personally, "Bob told the most awful jokes, sometimes the same one over and over. They were groaners," Morrison said. "But it was the way he told it, you had to laugh. The other thing about Bob was that he idolized his older brother. He would love to tell ‘Irwin stories,' talk about him with awe. You just don't see that very often."

Bob was not only the talking Goodman, he was the singing one. Starting in 1952, the brothers starred in television commercials for their business, with Robert's singular rendition of "Diamonds Are a Girl's Best Friend."

With Robert's death, the community loses an irreplaceable font of charm, but not necessarily money — thanks to the continuing Goodman Foundation. And certainly not, according to Morrison, their most important or long-lasting contribution.

"It will be the people for whom they were role models and the people they helped," he said.

Goodbye to the Goodmans

Their manner was always more impressive than their money.

The new South Madison Branch Library will be named in honor of celebrated Madison philanthropists Robert and Irwin Goodman after a $250,000 donation to the library's capital campaign by the Goodman Foundation.

Irwin Goodman, known for a life of generosity and thrift, dies at 94

Irwin Goodman, a pillar of the Madison community who along with his brother, Robert, gave more than $10 million to philanthropic causes, died …

Here's a partial list of the larger donations Irwin and Robert Goodman have made to Madison-area organizations:

Robert Goodman throws out the ceremonial first pitch at the 1999 opening of Goodman Diamond for the University of Wisconsin women’s softball team. Goodman, a serial philanthropist who died Thursday at 90, was a legendary fastpitch softball player in Madison.
© Copyright 2021 Capital Newspapers Inc., madison.com , 1901 Fish Hatchery Rd Madison, WI | Terms of Use | Privacy Policy
Powered by BLOX Content Management System from TownNews.com.
You don't have any notifications.