Sabrina Madison knows most places in the city weren’t designed with black women in mind.

“Black folks and especially black women don’t already have places that belong to them in this community,” Madison said. “There are not too many spaces where they already fit in when they walk in the door.”

So when thinking about the design of the future permanent home for her Progress Center for Black Women, she brought black women to the table on day one.

Madison recently met with SmithGroup, an architectural, engineering and planning firm, to cast a vision for the center, and she asked black women to come and weigh in. Participants said they felt “honored” to be invited.

“To me, Sabrina’s like our local celebrity,” said Ruby Clay, so when she was invited, “I was like, whoa, me?”

“I think it was one of the best meetings I’ve been to in my 39 years of living. To be sitting at a table full of leaders that look like myself — it was an amazing feeling,” said Alice Larrue, adding she hasn’t stopped talking about it since.

When Madison’s friend Mike Ford, known as the Hip Hop Architect, joined SmithGroup a few weeks ago as an architectural associate, he told her: “Sabrina, this is the perfect moment to now have a team start to look at your ideas for expanding.”

“For an architectural firm to be with me as I’m learning and going along means a lot to me,” Madison said.

Ford proposed a pro bono charrette, or cypher, which he explained is a time to come up with design ideas quickly, taking just a couple of hours to “conceptualize a space.” The group talked about programming and amenity possibilities for the future center, whether it partners with Movin’ Out, renovates a separate property or builds its own space.

“It’s the Progress Center for Black Women, and me and Sabrina have this long history of working together … (but) it’s time to introduce Sabrina to some women designers,” he said, especially as Dolley is one of the few African American women in the field.

At the charrette, SmithGroup provided pictures of design ideas and had participants answer questions about what they want for the center. Participants suggested programs and amenities like pregnancy support, fitness space and even a “black women TED talk.”

Participants brought up ideas and concerns that Madison hadn’t considered. Madison had always planned to have a reading space for kids, but mothers also asked for a more active space, to keep kids occupied while they’re at work in the center.

Other participants talked about the importance of creating a space that can serve people who have experienced trauma.

Everyone at the table shared some sort of trauma experience, whether it was racism or the loss of a loved one, Madison said, and wanted the space to serve that need, like by creating private spaces to host counseling and support groups.

“I always say that I want the Progress Center to be like an extended living room, like a black women’s living room,” Madison said. “But I’d never thought about how when you’re at home, it is kind of healing to just sort of kick off your shoes, lay down, be in a space with other folks who love you and just talk about things. That is actual healing. It took that design cipher for me to really think about that.”

Clay works at Domestic Abuse Intervention Services, so everything she does is geared toward helping clients heal from trauma, and “coming up with a space that would allow that to happen is amazing,” she said.

“This space should be able to hold celebration and joy and trauma just the same,” one participant wrote.

There’s not much awareness of the many local African American entrepreneurs, she said. She’s excited that the center could provide a platform for black-owned businesses to introduce themselves to the city, she said.

Larrue, Paul’s mother, said having her daughter’s memorial at a building dedicated to black women’s leadership was deeply meaningful to her.

“It’s so dope to be sitting in a room full of black women and a couple kids working on what the future of the Progress Center might look like,” Madison said in a Facebook Live video after the event. “I just feel really good.”

SmithGroup is now working on design suggestions for Madison, to act as a “starting point for her to be able to communicate with potential funders.” SmithGroup will also make visuals of the project, to help “communicate the vision with more than words,” Ford said. Madison will start pulling together a capital campaign team, hopefully by November.

McNeal said the charrette was one of the few times she’s walked away from a meeting fully believing that the ideas discussed will become a reality.

“It’s going to be amazing,” Larrue said. “I can’t wait for this center to come.”

In her work to carve out spaces for black women, Madison advocates, innovates and never apologizes

“Our daily lives are very stressful and I just need to breathe, and figure out techniques for coping with being a professional black woman in Madison,”  said attendee Angela Davis.

On Saturday, Sabrina “Heymiss Progress” Madison will cut the ribbon to her fully decorated, ready-to-roll Progress Center for Black Women, but she's not ready to settle there. "I don’t know that there’s a finish line," she said.

“We deal with so many serious issues throughout the week,” said Dr. Ruben Anthony, Jr., president and CEO of the Urban League, saying the picnic is a chance to relax and “let our hair down.” 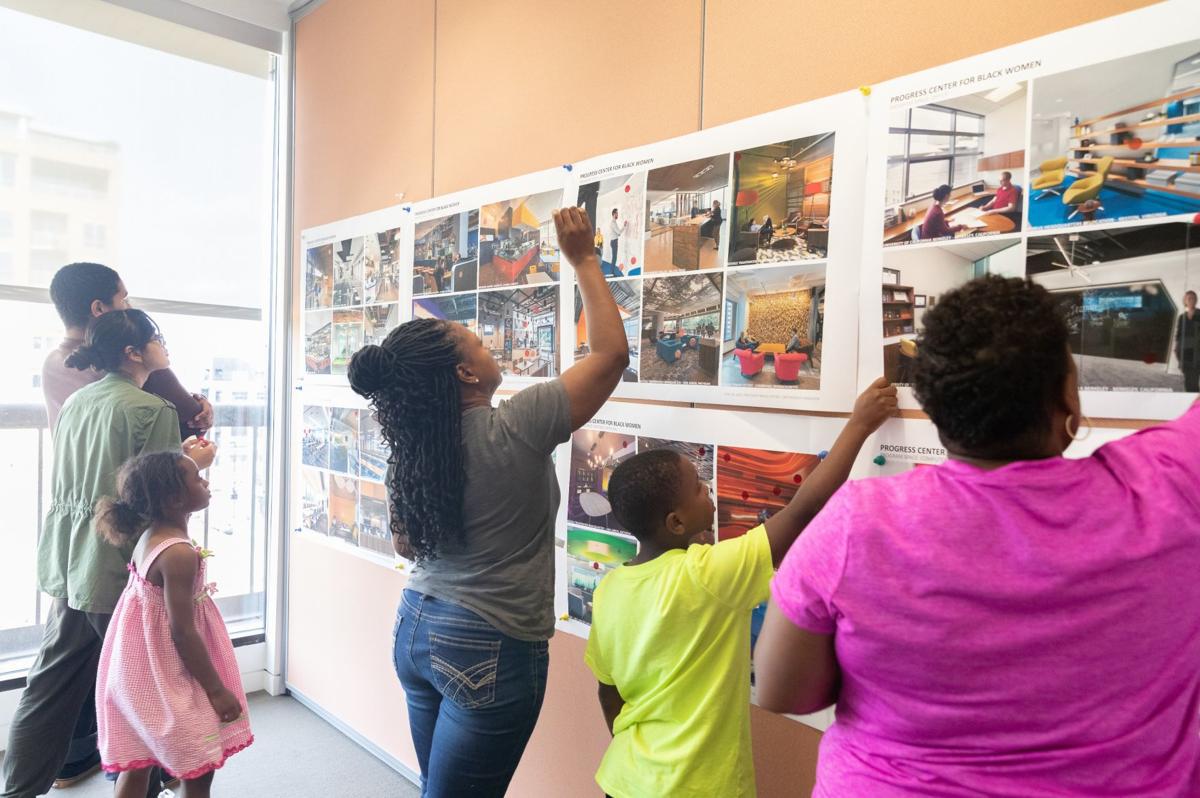 Participants put dots on photos they like at a design cypher for Sabrina Madison's future permanent Progress Center for Black Women. 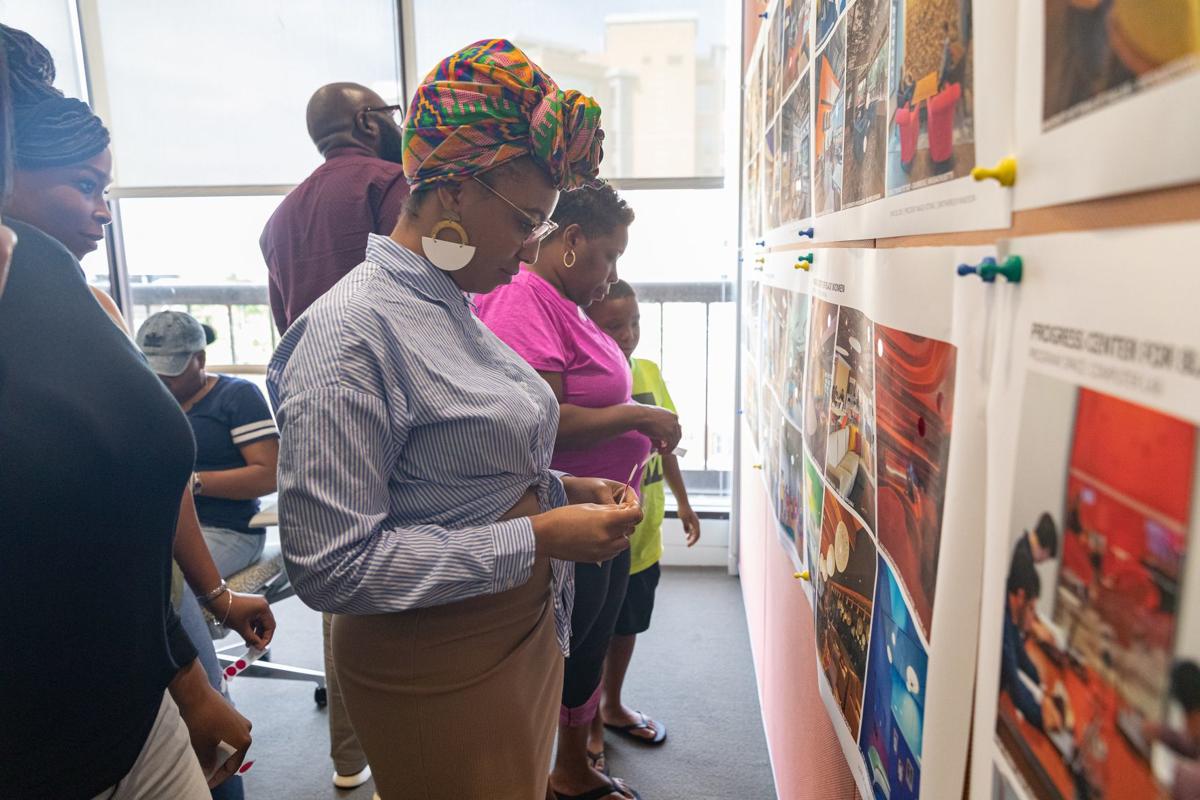 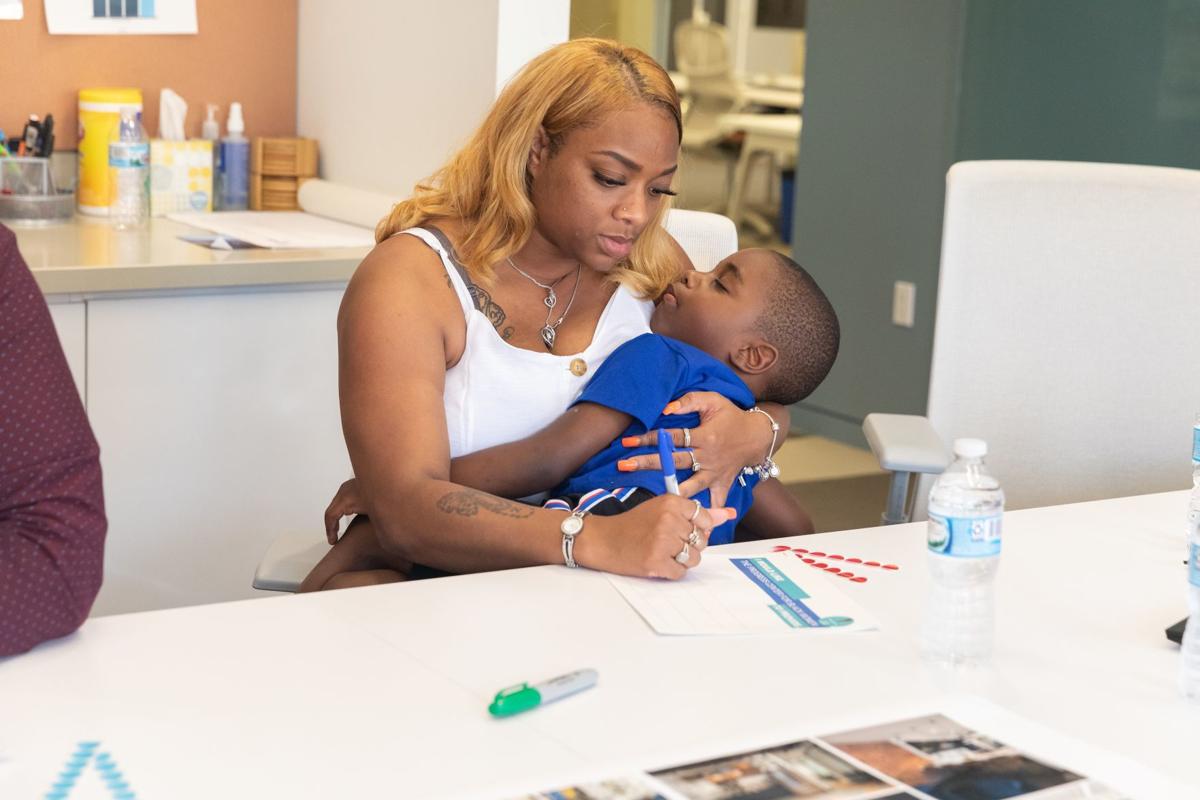 A participant holds a child at a design cypher for Sabrina Madison's future permanent Progress Center for Black Women.