MILWAUKEE — The ornate towers of Old Main have been a part of this city’s skyline for more than 150 years.

They stand as sentinels on a hill peering over the tree tops on the western edge of the Menomonee Valley and the Story Hill neighborhood.

In their shadow for decades was a quarry before County Stadium was completed in 1953. Miller Park, with its retractable dome, opened in 2001 and looms on the near horizon.

For more than 30 years, Old Main, completed in 1869 and part of the Milwaukee Soldiers Home complex, has been empty and in decay, its future threatened. But a Madison company is bringing new life to the facility and returning the High Victorian Gothic mansion back to its original purpose.

Only instead of 1,000 Civil War veterans sleeping on bunks in tight quarters, part of a $44.5 million project by the Alexander Co. is creating 80 apartments in Old Main for veterans and their families who are homeless or at risk of becoming homeless. Another 25,000 square feet will be dedicated to common space including lounges offering panoramic views to the east.

“It just shows the grandeur that building was meant to encompass” said Jonathan Beck, the Alexander Co.’s project manager. “It’s luxurious compared to what it was built for 150 years ago.”

The project, on a small portion of the 300-acre campus of the Clement J. Zablocki Veterans Administration Medical Center, includes transforming another five smaller buildings into 21 other living units as part of a lease agreement with the U.S. Department of Veterans Affairs, Alexander Co. and city of Milwaukee Housing Authority. If all goes according to plan, the first veterans will begin moving in next spring.

The former administration building, used by officers for office space beginning in the late 1800s, is being converted to 14 single-room units with shared bathrooms, kitchen and other common space. Tin ceilings have been restored, and one room, with tin on its walls, has been returned to its light blue color. The dining room will be in the former post office room — the metal and glass post office boxes, some with combinations, are being retained to add to the aesthetics.

The Catholic chaplain’s quarters, adjacent to the rows of headstones at Wood National Cemetery, will remain a single-family home, while three homes on North Mitchell Boulevard that formerly housed Soldiers Home staff and their families are being converted to duplexes with two-story, three-bedroom units on each side. The VA also will provide residents with counseling, financial literacy and other services.

“These buildings, they’ve been sitting here a while, and it’s nice to see them opening and having people see them in their full glory. But they needed some work,” said Christina Orr, the medical center’s assistant director. “Honestly, we were just hoping that someone would come and just use it, whether it was office space, or some other use. But this use far exceeds our expectations and dreams.”

A place of refuge

A month before his assassination in 1865, President Abraham Lincoln signed legislation to create a national system of homes for disabled veterans. What evolved in Milwaukee was the Soldiers Home, a 90-plus acre district that rests on the VA grounds and was designed to be a place of refuge for Civil War soldiers to aid their recuperation and help ease their transition back to civilian life. It contains some of the oldest and most historic buildings in the federal VA system and is one of the three original Soldiers Homes in the country.

But the roots of the property are a bit older. According to the Wisconsin Historical Society, the Wisconsin Soldiers Home Association was formed in 1864 by a coalition of women’s charitable organizations that raised funds to endow a hospital where sick and wounded Civil War soldiers could receive care. After securing a state appropriation of $5,000, the association staged a fair in 1865 that raised more than $110,000. The proceeds allowed the association to purchase land and establish a hospital. In 1867, the association transferred its property and remaining funds to the federal government for the establishment of the National Asylum for Disabled Volunteer Soldiers, Northwestern Branch.

The reuse project at the Soldiers Home was right in the wheelhouse for Joe Alexander, whose company specializes in the adaptive reuse of historic buildings not only in Wisconsin but throughout the country.

“It’s one of the most important veterans facilities in the history of the Veterans Administration,” Alexander said during a tour. “Basically, everything you’re going to see here, unless it’s a new demising wall within an apartment unit, is original. And if it’s (not), it had to be recreated to match what was originally there.

In 2019, Alexander completed a $46.6 million transformation of a 120,000-square-foot power house along the Rock River into a student center for Beloit College, and this year completed the $54 million reuse of a 470,000-square-foot mill works building in Greensboro, North Carolina. Other projects include the $110 million conversion of the National Park Seminary in Maryland into housing, turning a former federal courthouse in Kansas City, Missouri, into lofts and retail space, and a former high school constructed in 1911 in South Bend, Indiana, into apartments.

One of the company’s largest efforts is underway just outside of Washington, D.C., where the former Lorton Prison in Fairfax County, Virginia, is undergoing a $190 million conversion into housing, office and retail space.

‘We had to get creative’

Alexander, whose grandfather spent time at the Milwaukee VA hospital after World War II, said for the Milwaukee Soldiers Home project he was encouraged by the National Trust for Historic Preservation to respond to a request for proposals.

“There weren’t that many respondents because this is a tough job to do,” Alexander said during a tour last month of the property. “And you can imagine the financing stack to get this done for homeless veterans. We had to get creative.”

The funding has included state and federal historic tax credits, state and federal low income housing credits and private fundraising. The Alexander Co. has a 75-year lease on the property and has spent the last two years on renovating the historic structures, some that include their original maple floors. In the case of Old Main, more than 650 window and door openings received upgrades, some of which offer grand views of the property dissected by the Hank Aaron State Trail.

“The building, the views and the windows and everything is just really spectacular,” Beck said. “We have a lot of people that go through that are working for the VA or other firms working for us and they say they all want to have an apartment there. Fortunately it’s for veterans only. They really are phenomenal views.”

After days of highs in the 70s, thunderstorms Tuesday will usher in more normal highs for November in the 40s for southern Wisconsin, according to forecasters. 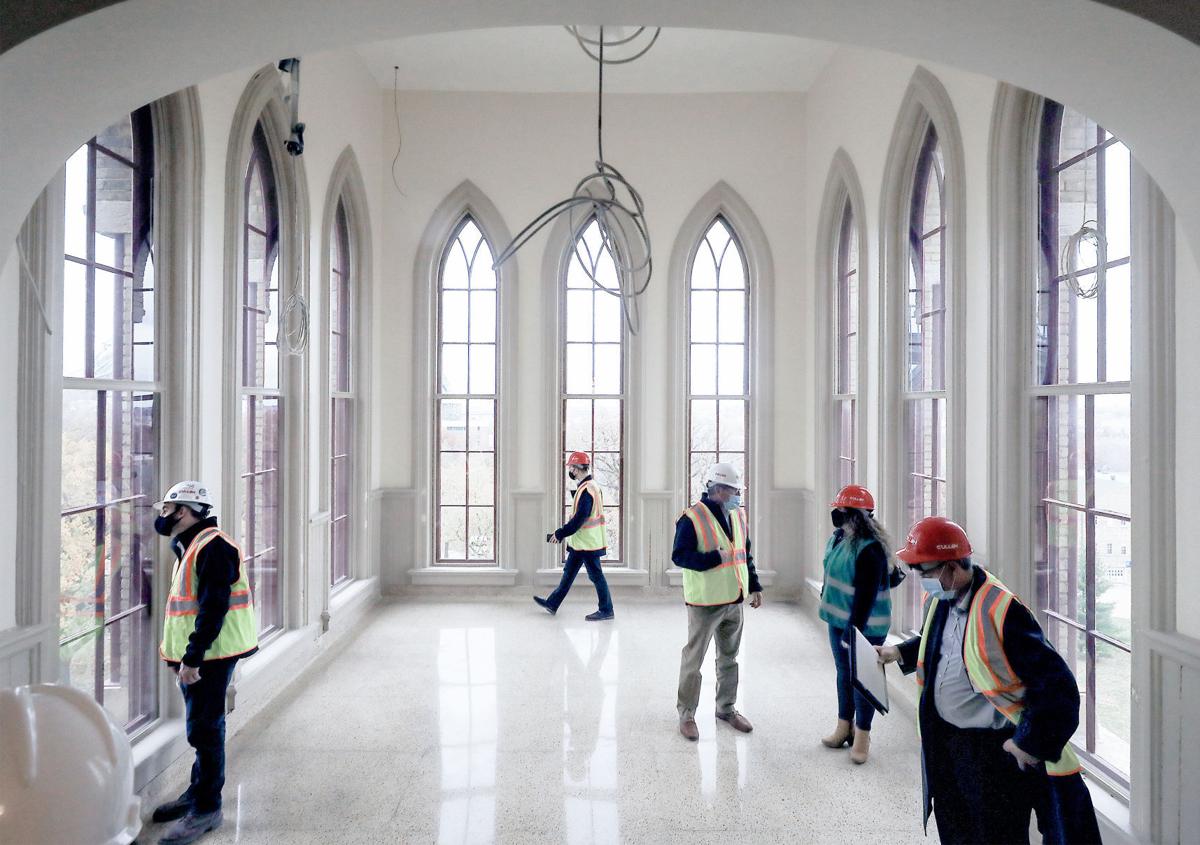 The Milwaukee Soldiers Home has a long history, but for more than 30 years many of its buildings have sat empty amid a state of decay. The Alexander Co., of Madison, is in the midst of a $44.5 million renovation and restoration that converts six buildings to housing for veterans and their families facing homelessness. This is one of the common spaces in Old Main, constructed in the late 1860s for Civil War veterans. 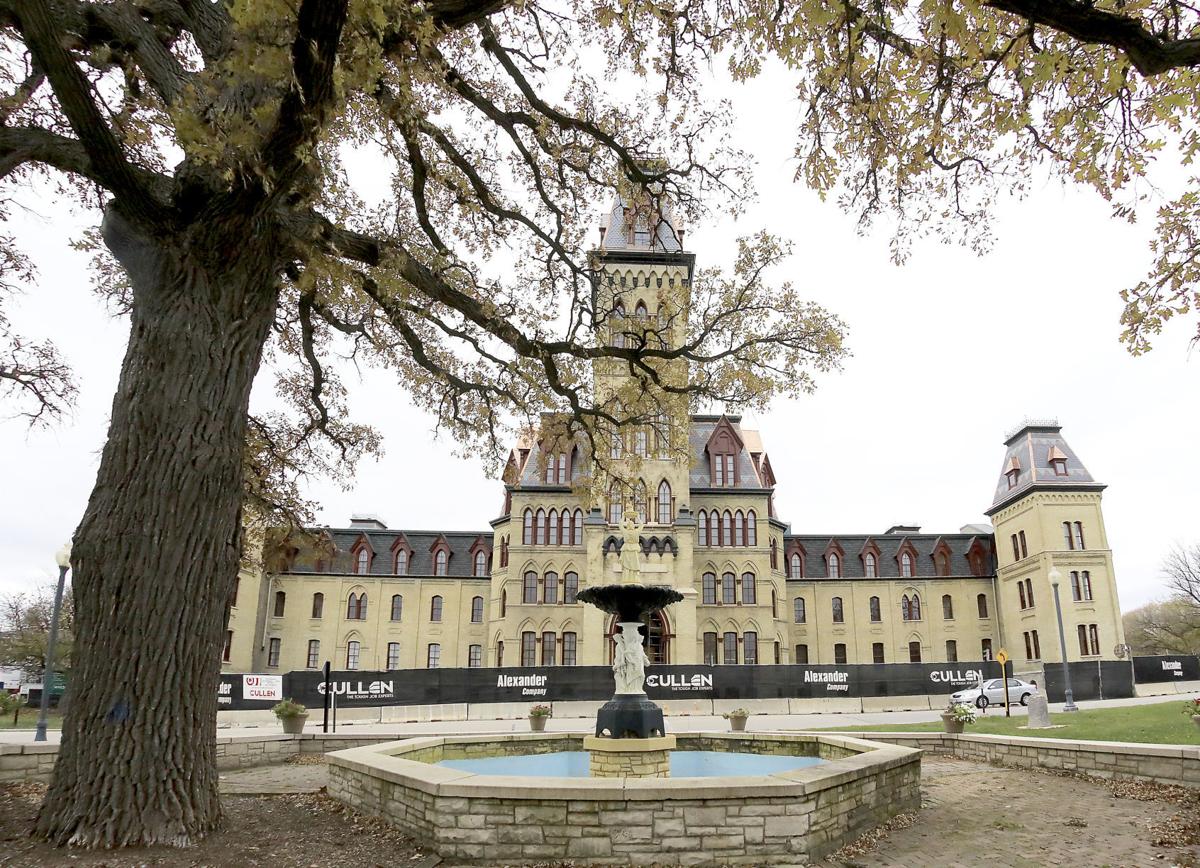 The Milwaukee Soldiers Home, a 90-plus-acre district that rests on the Veterans Administration grounds, includes some of the oldest and most historic buildings in the federal VA system and is one of the three original Soldiers Homes in the country. 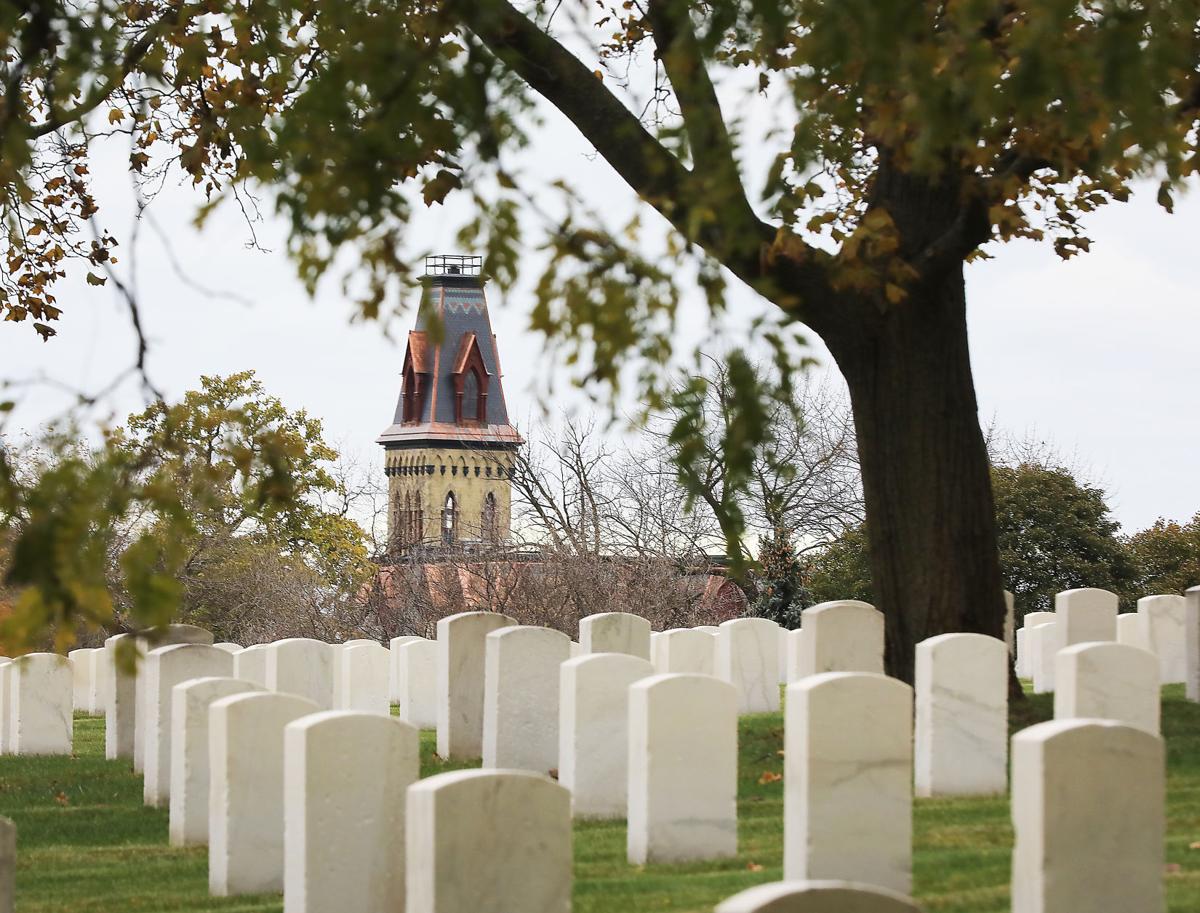 A portion of Old Main, the centerpiece of the Milwaukee Soldiers Home complex, is seen in the background of Wood National Cemetery, which opened in 1871 and is home to more than 37,000 grave sites. Originally known as Soldiers Home Cemetery, the name was changed in 1937 to honor Gen. George Wood, a longtime member of the Soldiers Home’s Board of Managers. It became a national cemetery in 1973. 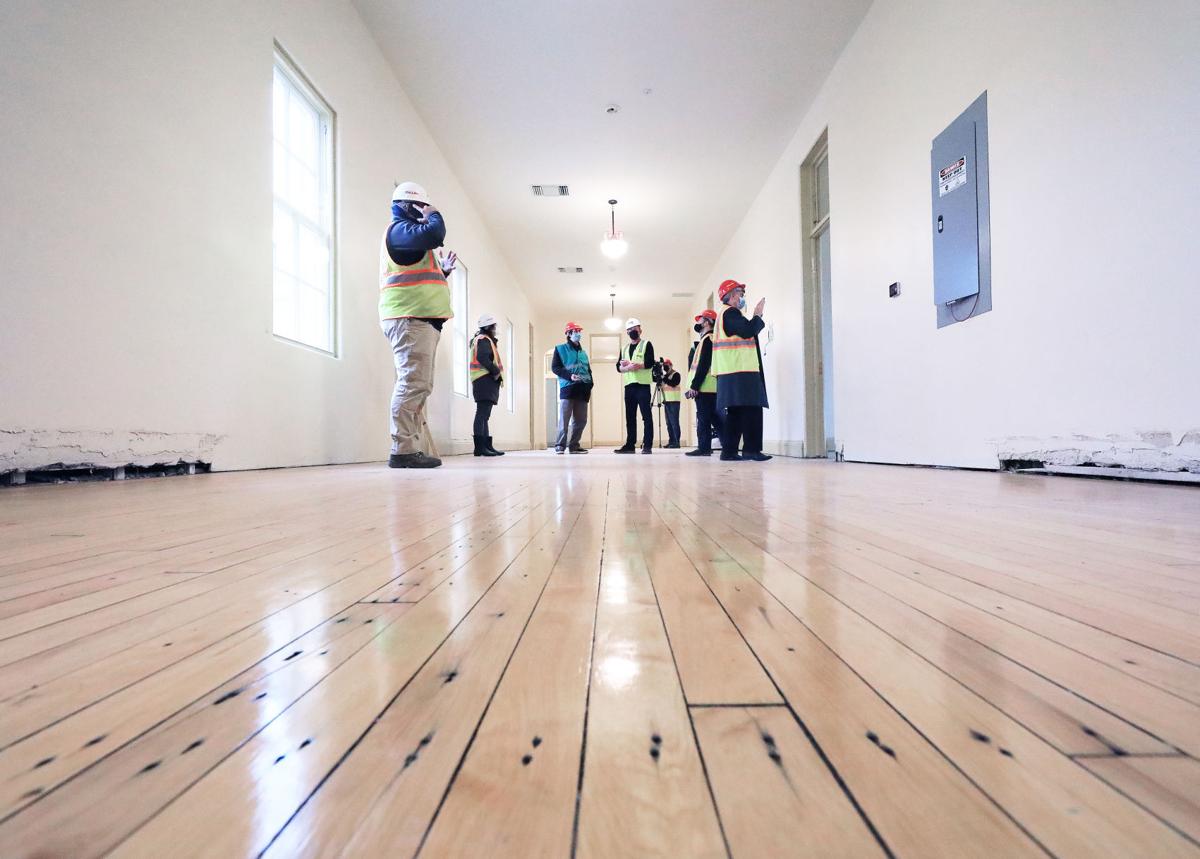 Original maple flooring is prolific in the historic buildings of the Milwaukee Soldiers Home complex. This former administration building is being converted to 14 single-room units with shared bathrooms, kitchen and other common space. 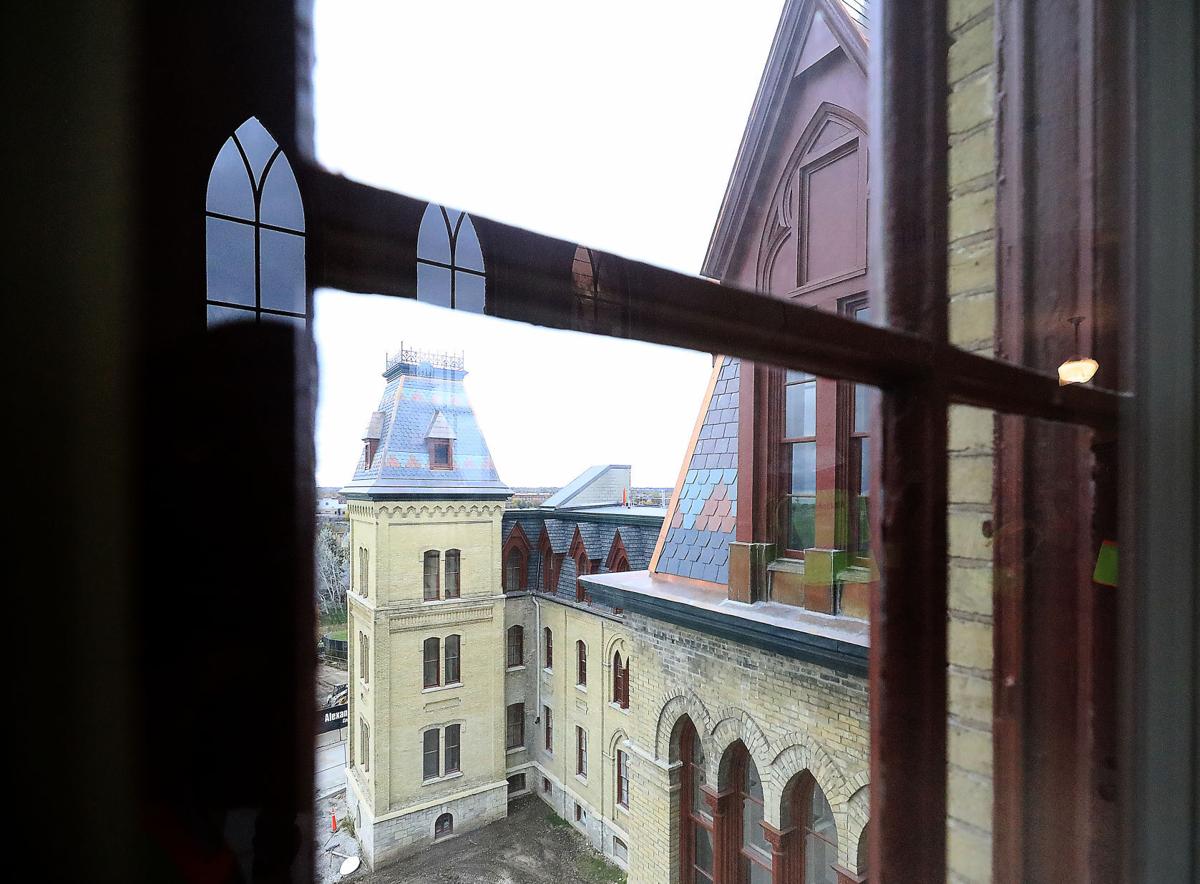 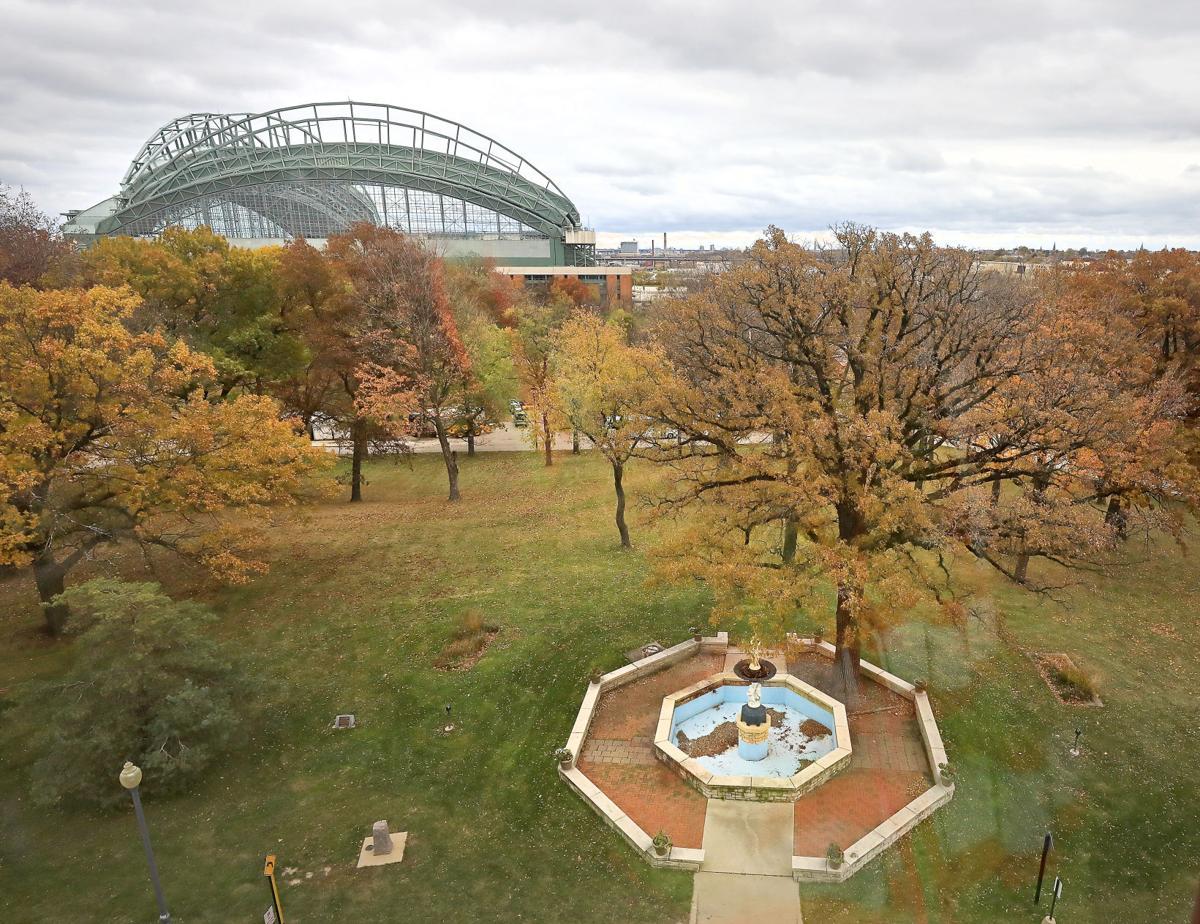 The Milwaukee Soldiers Home complex stands in contrast to neighboring Miller Park and its retractable dome. 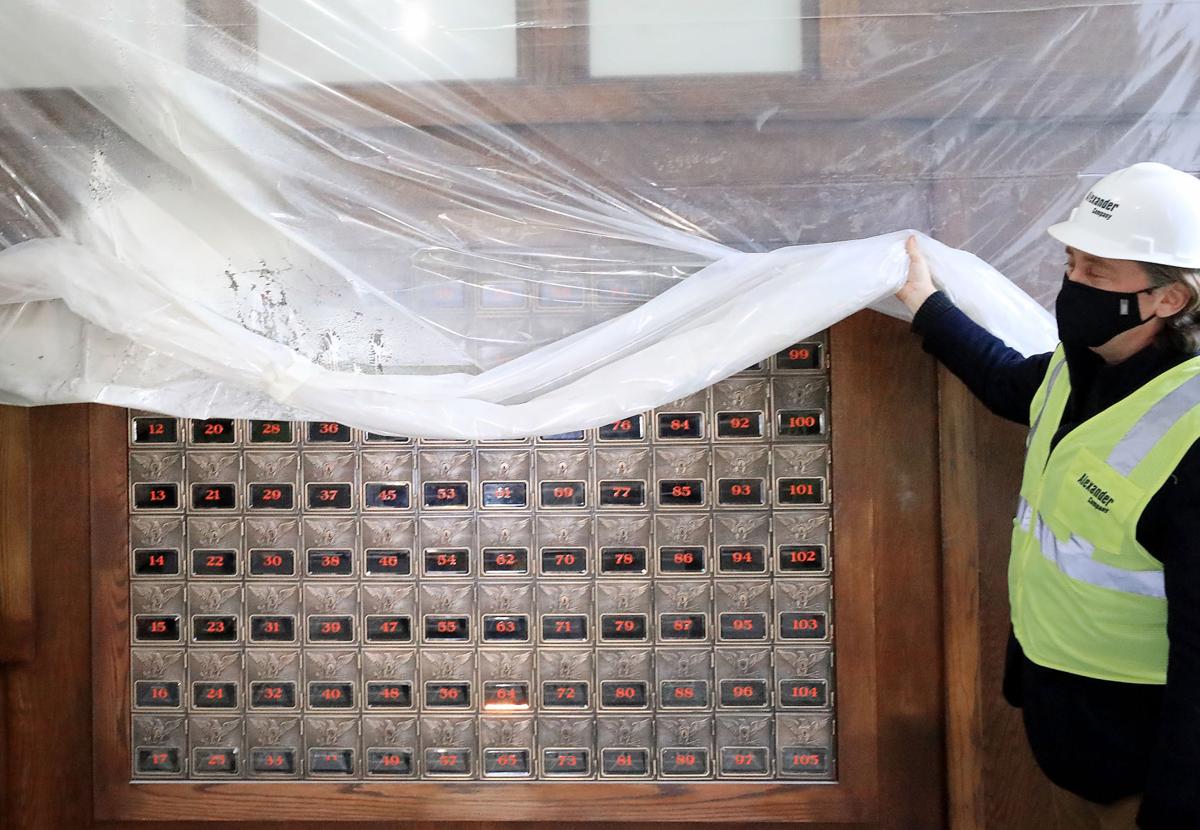 The former post office in the former administration building at the Milwaukee Soldiers Home will be used as a dining room, but the mailboxes are being retained to remind visitors of the past and preserve the building's history. 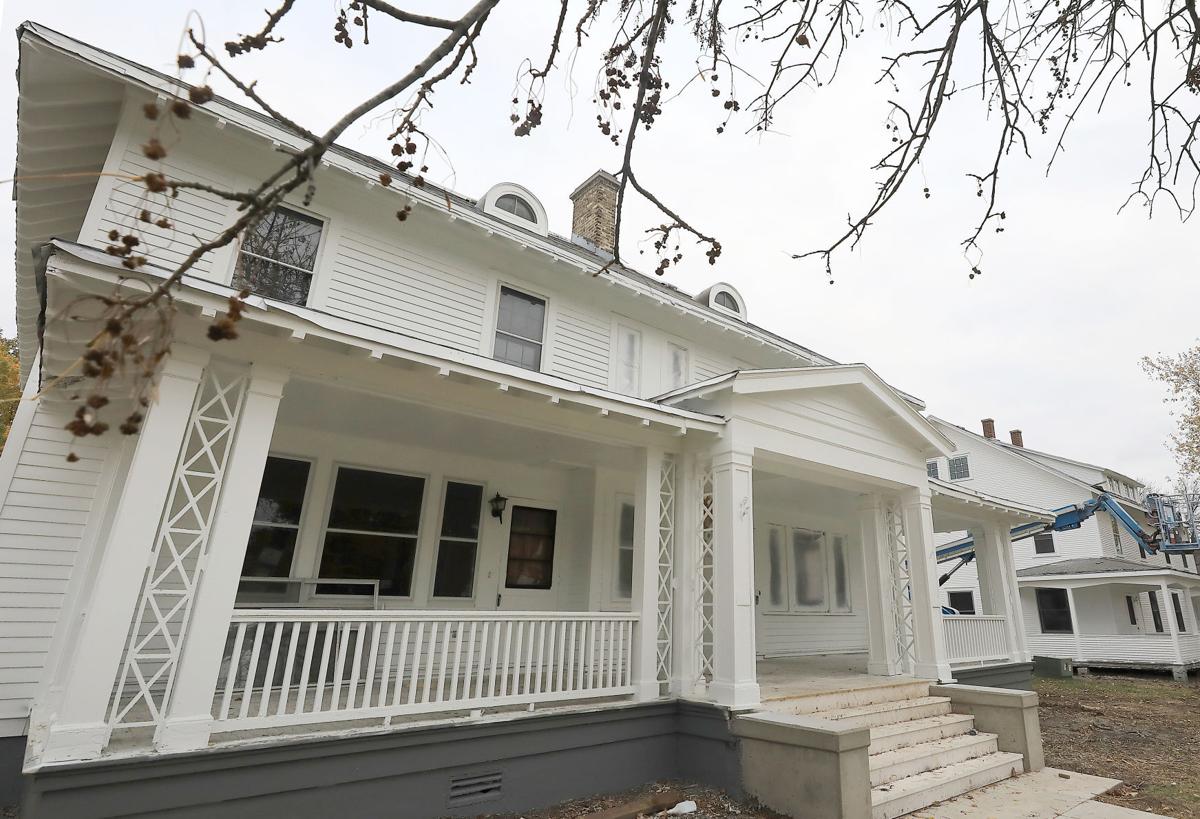 Six buildings at the Milwaukee Soldiers Home complex are getting upgrades as part of a $44.5 million project by Madison-based Alexander Co. Three homes on North Mitchell Boulevard that formerly housed Soldiers Home staff and their families are being converted to duplexes with two-story, three-bedroom units on each side.