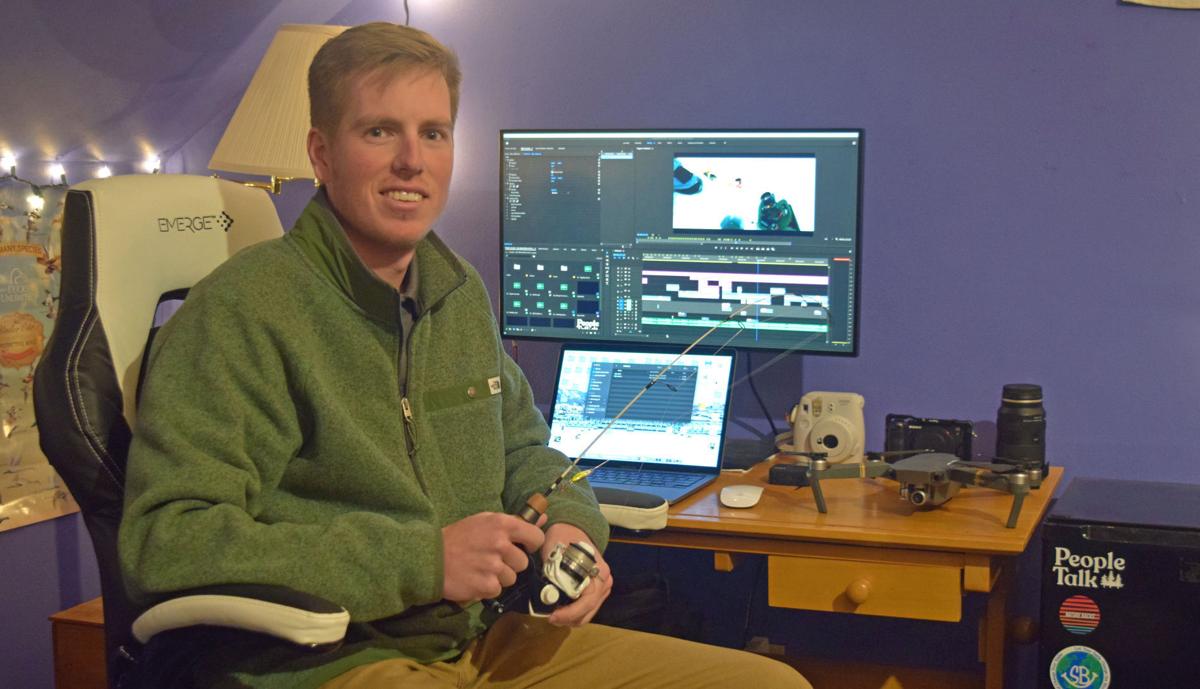 Among all of his outdoors adventures, Austin said that fishing, whether it be in a boat, on the shore or on the ice, is his favorite. 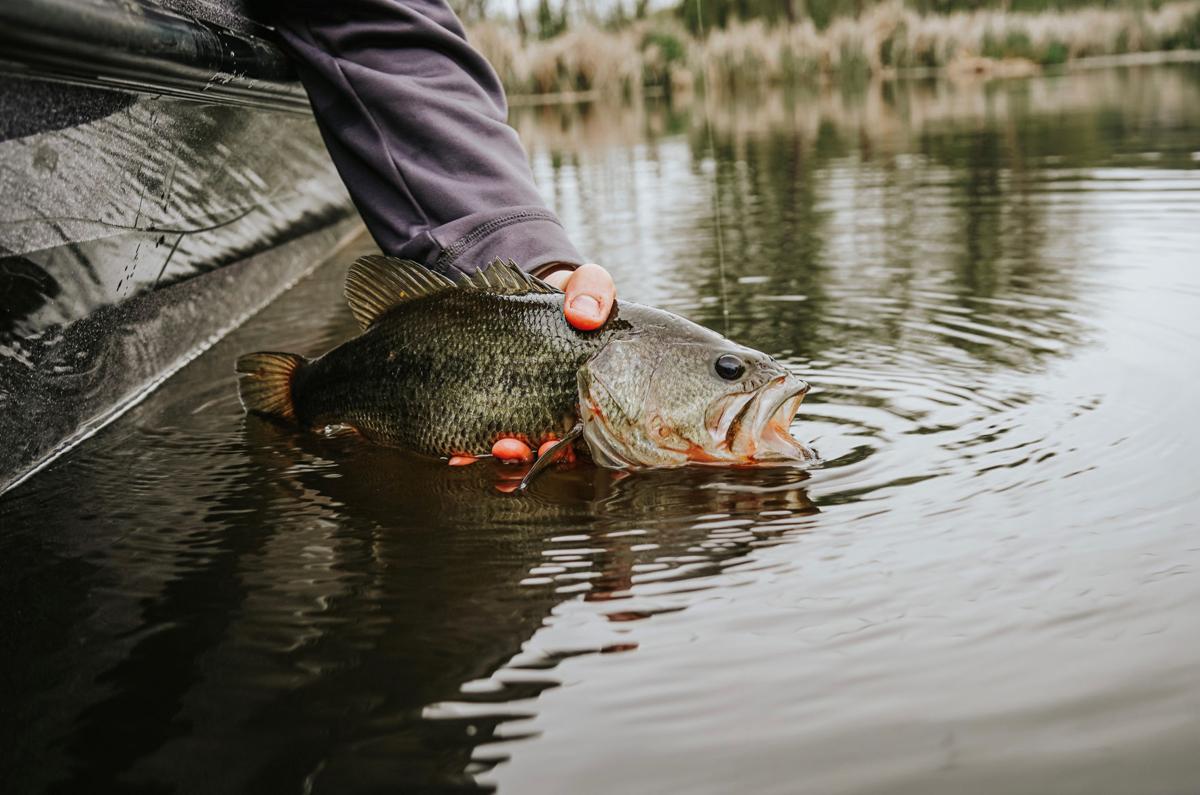 A largemouth bass getting released on the Wisconsin River from a trip earlier this spring. 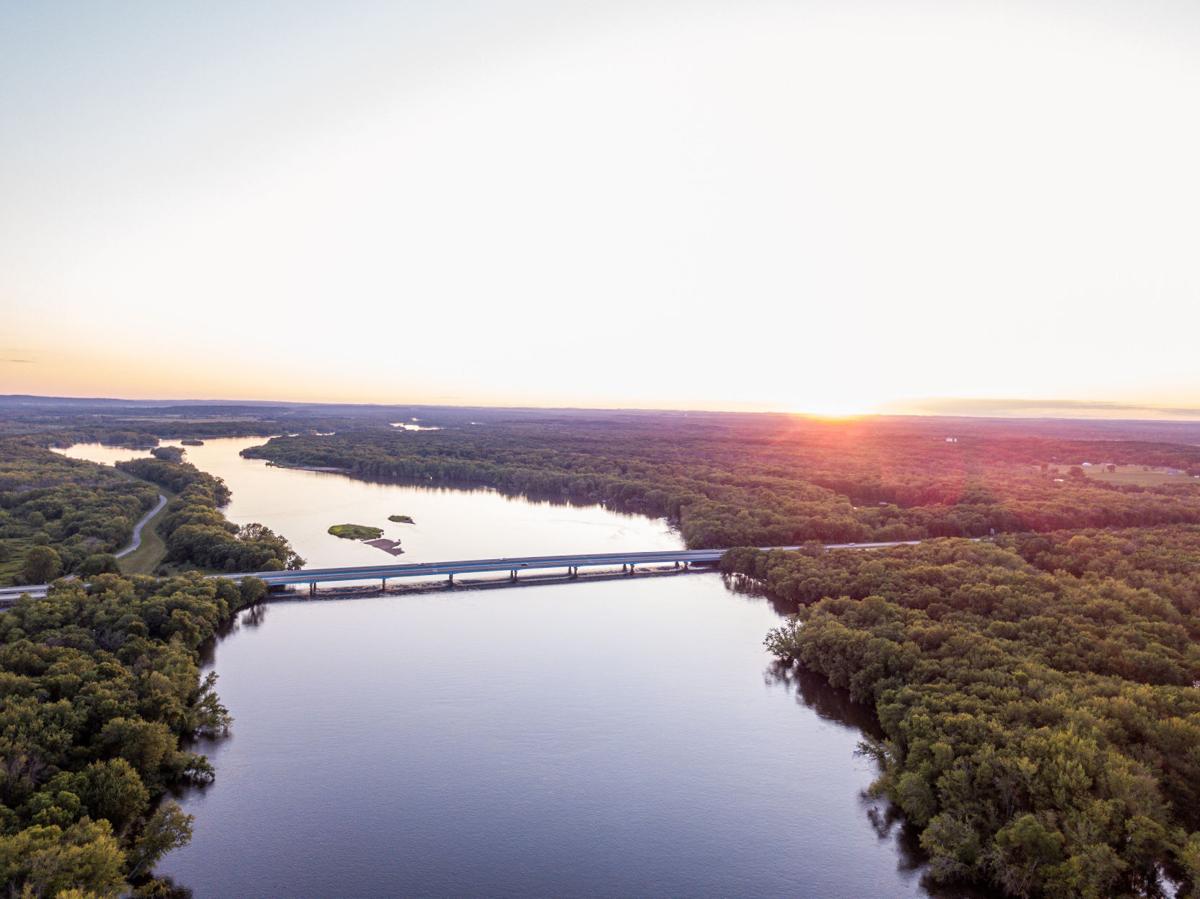 Austin has incorporated lots of drone video footage and still shots, like this of the Wisconsin River above the bridge on interstate I-39 entering Portage, into his video and photo posts. 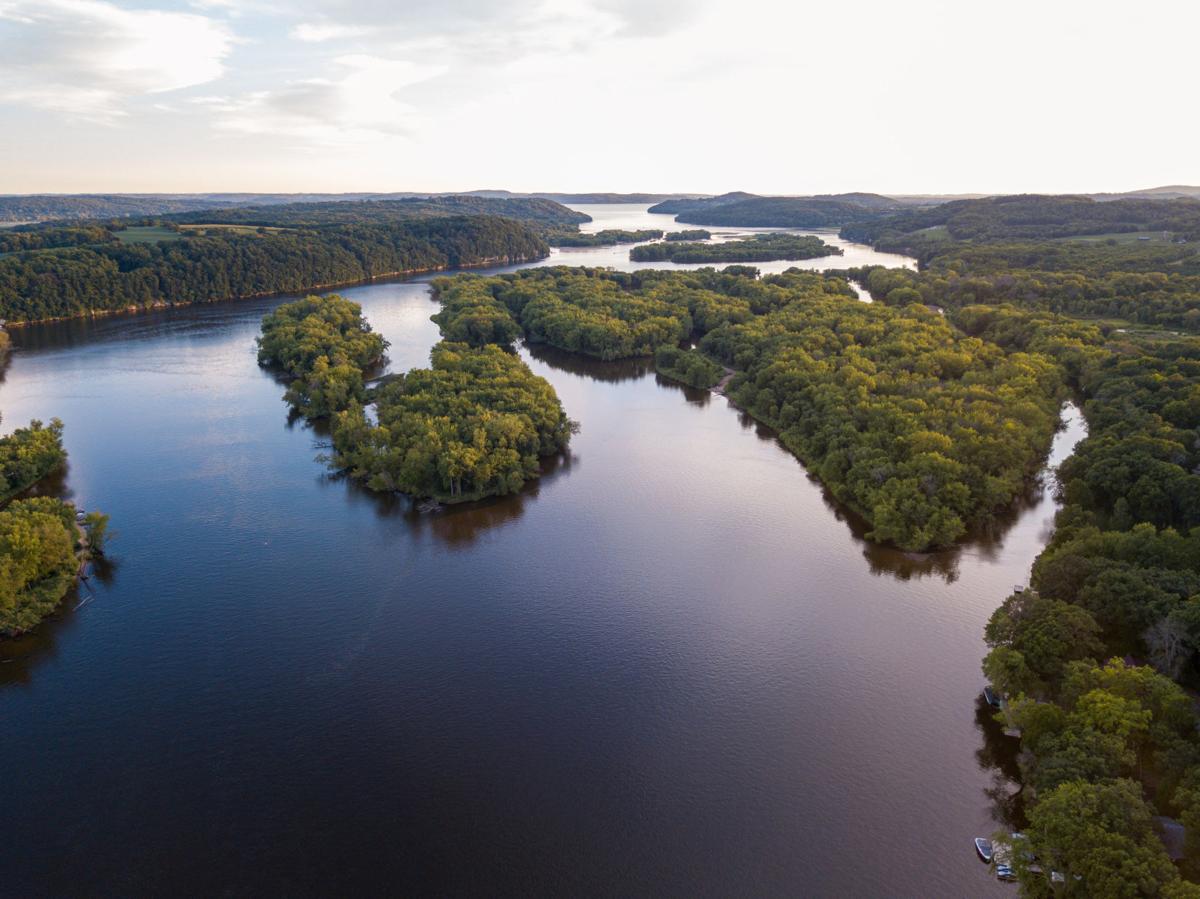 An overhead look at the Wisconsin River just before entering Lake Wisconsin.

But his high school athletics career — he graduated from Portage High School in 2015 — and his pursuit of a general business degree from UW-Whitewater, where he graduated in 2019, limited the amount of time he could get outside.

However, it wasn't long after that he came across his next adventure.

In April of 2020, Austin launched People Talk — @peopletalk.official on Instagram — as what he described as an “outdoor page covering a little bit of everything,” and he wasn’t kidding. Since its launch, the account has garnered more than 650 followers and over 15,000 views on 25 videos to date chronicling everything from ice fishing to turkey hunting and much more, not to mention thousands of likes on 43 other posts.

“I’ve always kind of wanted to film fishing trips or hunts, or different trips or events and go with friends,” he said. “I’ve always thought it would be cool to do something like that, I just never pursued it until once I got out of college.”

For Austin, it’s been gratifying seeing the page’s popularity grow in a matter of 20 months, especially from where he started with just his phone and some inspiration watching YouTube videos.

That interaction may not have happened had it not been for some initial help from elder sister Liz Austin (a professional wedding photographer) and brother-in-law Max Lesatz.

“[Max is] the one who originally had the drone that I now have and use, and they kind of helped get me started in all of this, too, and have helped me along the way with a lot of the technology side and all of the work there,” Patrick Austin said.

During his time as a Warhawk, Austin said he and his friends would often call each other out on their white lies with the phrase “People talk.”

“We’d always be goofing around or talking cheese to one another, and when guys would say something that didn’t have any true meaning or backbone behind it, something I knew they couldn’t follow through with, I’d call them out and say ‘People talk,’” he said.

So when it came time to name the channel, Lesatz knew exactly what to do.

“He’s like, ‘Well you already have your name. People know you for always saying ‘People Talk,’ so why don’t we call it that,” Austin said of Lesatz, who also helped design the logo with the serif font and trees.

“I was like, ‘Perfect, it was sitting right in front of me and I didn’t even know it.’”

A little help from some friends

Sam Harkins, a fellow 2015 Portage grad, is one of a handful of close friends typically alongside Patrick on his hunting and fishing adventures. For Harkins, adding the ability to chronicle the group’s good times is just the cherry on top of an already rich sundae.

“Even before we brought a camera with, it was always fun. It was just a good time being with your buddies, and now we can get it on film and re-live it. It just sort of brings you back once you re-watch some of the footage and videos he makes,” he said.

“I’d say I’m a little more spoiled than just some of the other people that get to watch it — I get to be there for it, too, which I’m very lucky to be part of and very much enjoy.”

The channel includes a bevy of different videos and posts. Among those include various turkey hunts and ice fishing trips, as well as a day spent on the Walk-Era Farms, overhead footage of Michigan State’s Spartan Stadium and much more.

"There’s nothing [Austin] won’t do, or really even can’t do," Harkins said.

“He sees something and sees an opportunity to get some video or footage of something he finds cool, he’s just going to break out the equipment."

Other samplings for people to view is a Showcase Thursday, featuring someone from the People Talk community and their most recent hunting or fishing exploits.

“I remember when he started it, we were just kind of chatting and he said, ‘I don’t really have anything in mind for a specific direction. It’s basically kind of if there’s something I want to do, I’d love to do it,’” Harkins said.

More tricks of the trade

Austin has bulked up his equipment arsenal with tripods, an actual camera and a drone from brother-in-law Max.

It’s also helped push his production skills. Running the channel is Austin’s pet project — a "time consuming and challenging one," he said — for now as he works full-time in the accounting department at General Engineering Company. A hunting or fishing video one to two minutes long can take "a good 10 hours" to edit, Austin said.

“Between uploading all the footage, cutting it up; getting the clips to where I want them to be, at certain times when the beat drops on the song, and then adding in transitions and color editing, the whole nine yards," he said. "Some videos can be pretty quick, but some of them are longer than others.”

In Harkins’ eyes, the attention to detail is worth the wait, and from both an in-person and fan perspective, Austin’s evolution has been exciting to see unfold.

“That’s one thing that’s been really fun to watch; how he’s grown, and not just having nicer stuff, but he’s extremely skilled in the editing and skilled in thinking ‘Oh, this would be a cool shot,’” Harkins said. “Being that I get to be with him for a lot of the stuff, I don’t think people realize how hard it is to get some of that footage for videos, and just how much stuff ends up on the cutting room floor.

Still, some videos have stood out above the rest.

Austin said he really enjoys shooting anything and everything fishing because “there always tends to be a decent amount of action.” Harkins enjoyed Austin’s first-ever ice fishing video, while both were blown away by his video chronicling the Portage high school football team’s 36-14 Homecoming romp over Sauk Prairie on Oct. 1.

The public was blown away, too, with the video garnering the channel’s most views to date with more than 3,400.

“The amount of people that reached out and messaged me, texted me and saw me the next week at the store, so many people came up to me and said they thought it was pretty cool I did that,” he said. “That was probably the one I was most proud of and it’s gotten the most views and popularity.”

It was Austin’s first-ever time shooting a live sporting event but has him pondering what the future could hold for not only content, but the channel itself. Being the avid fisherman he is, Austin has pondered the thought of an ice fishing circuit with a 4-5 part series hitting a number of bigger lakes across the state.

He also said some of his friends are mulling over a hunting trip out west.

“If I had the chance to go and film that, I’d definitely take that opportunity,” he said.

Austin eventually wants to create and grow a YouTube channel. He might start a website, lease out services for other hunters looking to document their own hunting adventures and expand his merchandise — his current stock includes some bracelets and hats, replete with the channel’s logo.

But that's in the future. Right now, he's enjoying building a following one video at a time.

“It has been pretty rewarding in a way to see the channel/page grow, month-by-month, getting some more followers here and there and with every new video getting more followers,” he said. “So when I do go out to bigger events or gatherings, or out to a restaurant, sometimes people will come up to me and call me the ‘People Talk guy.’

“People don’t even call me Patrick anymore, they’ll come up and say ‘Hey, People Talk.’ It’s pretty cool and there’s definitely a lot of community interaction seeing me out and about and saying they follow the page or whatnot.” 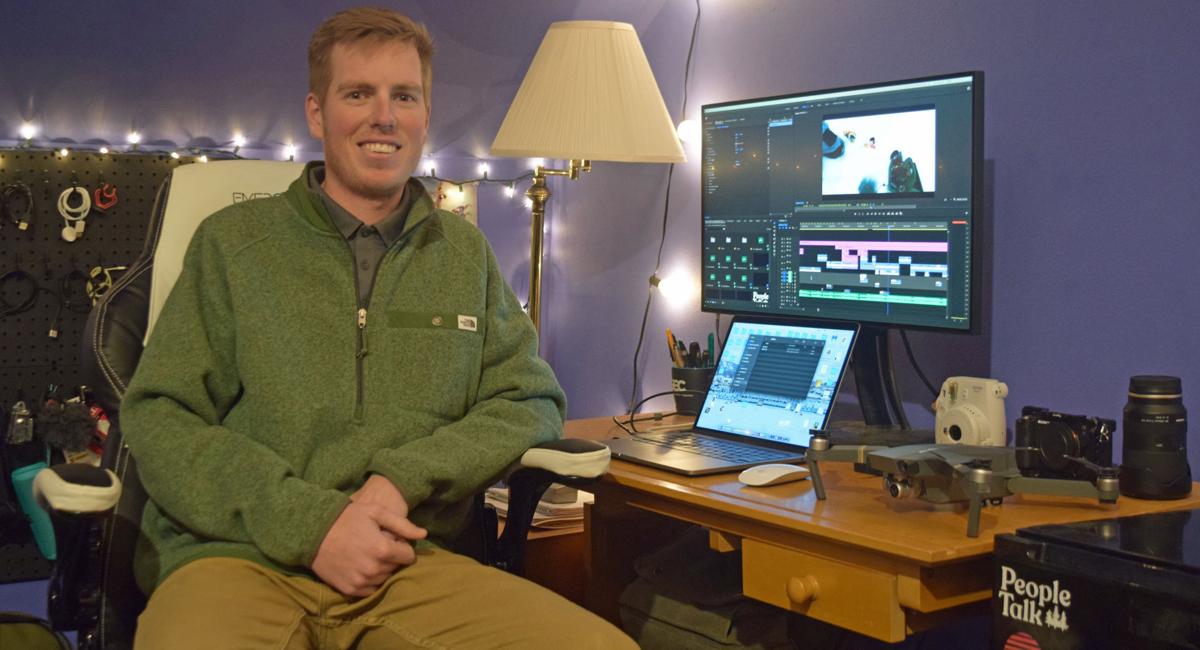 Patrick Austin poses for a photo in his office, where he creates videos and edits photos for his People Talk account on Instagram. To date, the 2015 Portage grad's pet project has over 650 followers and 15,000 views on 24 videos, not to mention thousands of likes on other posts. 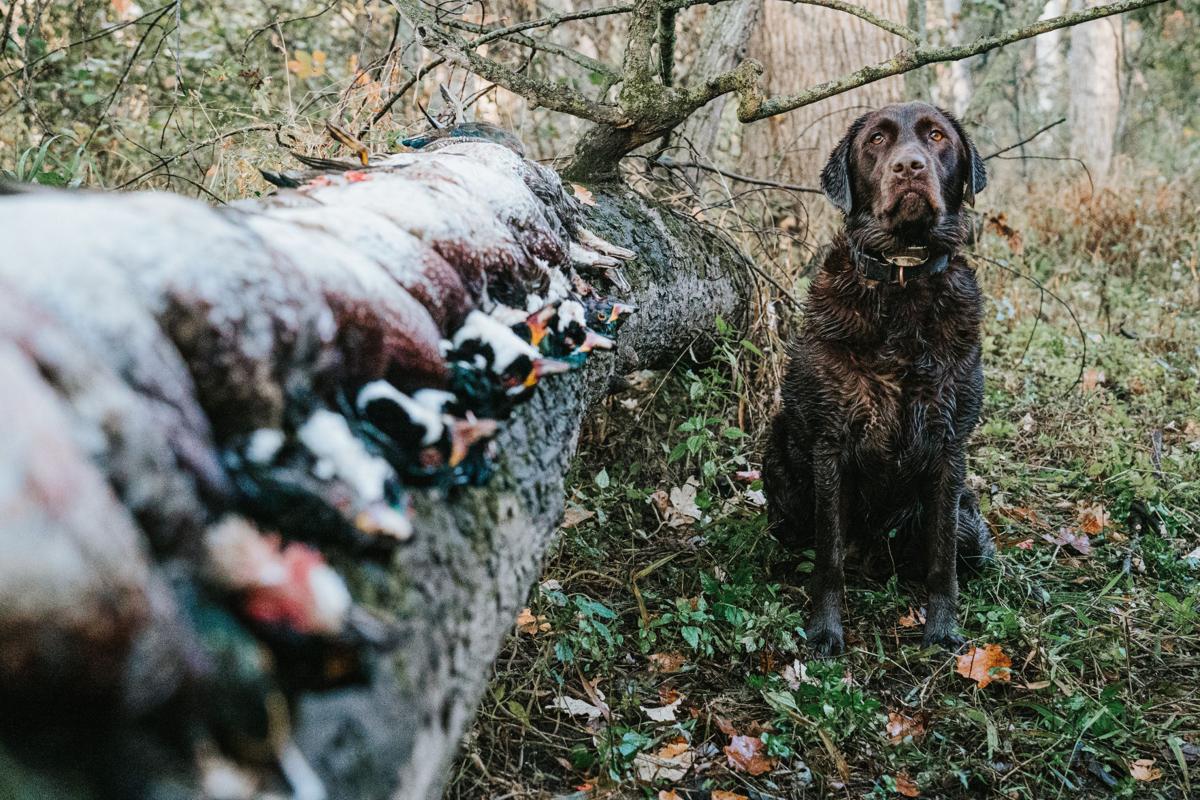 Austin and his friends hunt everything from turkey to deer, and the pictured ducks and other water fowl.

Among all of his outdoors adventures, Austin said that fishing, whether it be in a boat, on the shore or on the ice, is his favorite.

A largemouth bass getting released on the Wisconsin River from a trip earlier this spring.

Austin has incorporated lots of drone video footage and still shots, like this of the Wisconsin River above the bridge on interstate I-39 entering Portage, into his video and photo posts. 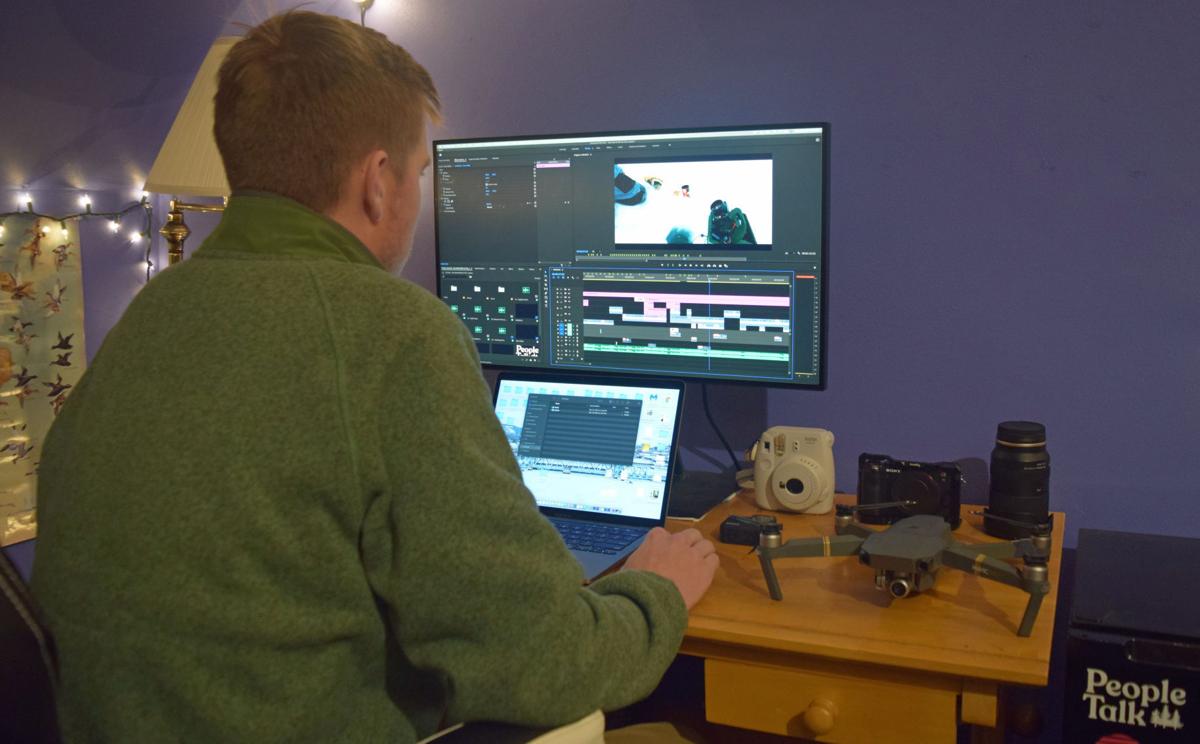 Austin, who takes his own photos and video footage, including on the visible drone, said some videos may take up to as much as 10 hours worth of editing.

An overhead look at the Wisconsin River just before entering Lake Wisconsin. 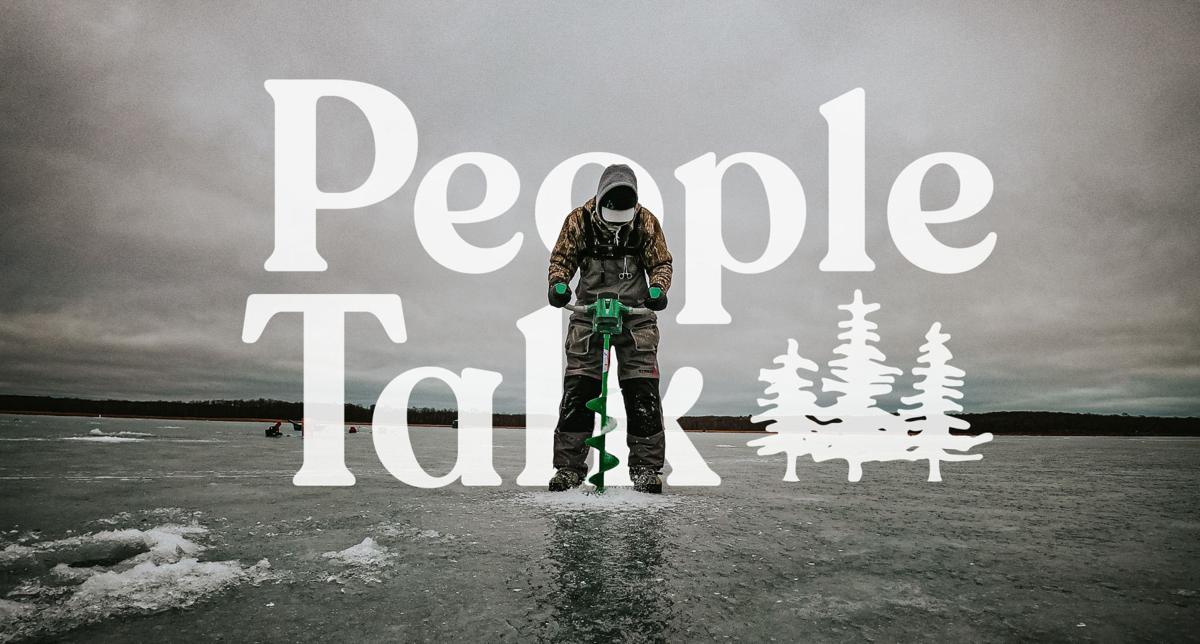