Hundreds of people turned out Sunday as dusk fell over Olbrich Park to celebrate the opening of “How Lovely Are Thy Branches,” a labyrinth built from evergreen branches stretching across the January snow.

“It’s very serene, even with all the people around,” said Madison resident Jesse Steinberg, pointing out the labyrinth's picturesque setting, framed by a winter-white sky and the expansive Lake Monona shore, with the Capitol building on the distant horizon.

“How Lovely Are Thy Branches,” a BLINK art installation that will remain in the park through February, was built from donated Christmas trees that area residents brought to the site in cars, on sleds and in wagons earlier this month.

Artist Lillian Sizemore and a crew of volunteers spent much of the past two weeks sorting the trees and cutting off their branches, or "de-branching" the evergreens, then placing them along a complex pattern carefully laid out by Sizemore.

The installation also includes a "tree museum" of different varieties of Christmas trees and a "living room" area ringed by hay bales to give visitors a place to pause and rest.

During her opening remarks for Sunday's ceremony, Mayor Satya Rhodes-Conway described the project as one of "connection, conservation and contemplation," bringing together people to appreciate the outdoors.

Sizemore said she was "super-happy" about the turnout. "I am so thrilled that so many people are interested in this piece of land-art and having something fun to do on a Sunday afternoon and a beautiful calm evening," she said.

Bundled up and wearing masks, the crowd of visitors lingered nearby the tree museum and the 90-foot-diameter labyrinth taking in the scene. First welcomed into the labyrinth itself was a group of hoop dancers, twisting and spinning as they made their way along the path with lighted hula hoops.

Melissa and Yahya Rushdi of Fitchburg, who brought their 6-month-old son Luke, said they were lured to the opening for "How Lovely Are Thy Branches" by their interest in art.

"We thought it would be something beautiful," Melissa Rushdi said. "I love the smell out here, too. It's amazing -- it smells like Christmas."

Sizemore, a mosaic artist and master gardener, conceived the idea of a temporary outdoor labyrinth and spent more than a year planning the project. The art installation was commissioned by the Madison Arts Commission’s BLINK program.

A labyrinth is not a maze but rather a single path that winds upon itself, quieting the mind in the process.

“This ... design consists of a single pathway that loops back and forth to form seven circuits, bounded by eight walls, surrounding the central goal," Sizemore described in her BLINK application.

Visitors to Olbrich Park are advised by signs at the site to not rush through as they walk the labyrinth, but rather to "slow your roll" and "attune with the magical labyrinth experience."

Jesse Steinberg and Erica Throneburg came to the opening for "How Lovely Are Thy Branches" with their two children as a way to celebrate winter and community, they said. They were the first to enter the labyrinth behind the hoop dancers and then the artist herself.

“That was amazing," their 9-year-old son, Sam, said after they completed their labyrinth journey. "I really like how they reused these Christmas trees and they made it into a gigantic labyrinth that everybody could walk through."

Photos: 'How Lovely Are Thy Branches' labyrinth at Olbrich Park

What: "How Lovely Are Thy Branches," an outdoor art installation by Lillian Sizemore

O Tannenbaum: Were you turned into mulch — or art?

"How Lovely Are Thy Branches" at Olbrich Park will create a joyous place to gather — or a quiet spot to wander alone.

Over the past decade nearly 20 labyrinths have sprung up in and around Madison, part of a growing movement to counter modern-day stresses with an ancient and mysterious tool.

Skate, run, walk, hike, fish – these winter festivals have it all

Mark your calendar with loads of fun, free snowy celebrations.

Earlier fears of the heavy band of snow hitting southern Wisconsin have eased, with the Chicago area now on the northern edge of the heavy snow, according to forecasters.

The Madison Shakespeare Company is launching its 10th anniversary season with “A Valentine’s Affair 2022."

“I grew up reading the State Journal, and I’ve always had a lot of respect for the paper and the newsroom’s ability to keep Madison informed,” said Lecker, whose family still lives in northeast Wisconsin. 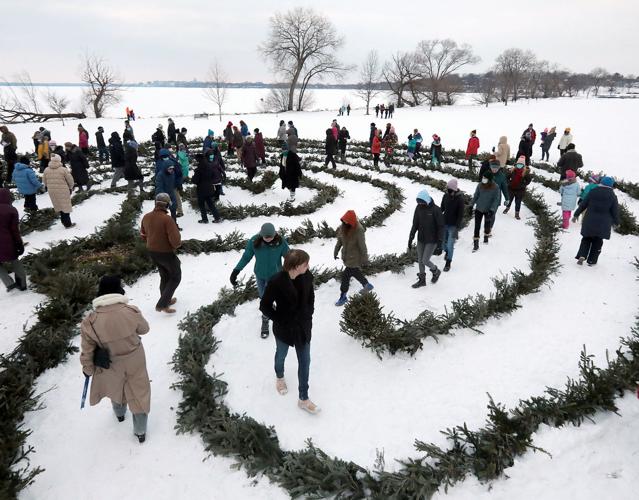 Visitors to the public opening for “How Lovely Are Thy Branches” wend through the public art installation at Olbrich Park on Sunday afternoon. Made from repurposed Christmas trees donated by the public, the nearly 90-foot-diameter labyrinth was designed by artist Lillian Sizemore and funded through the Madison Arts Commission’s BLINK program. 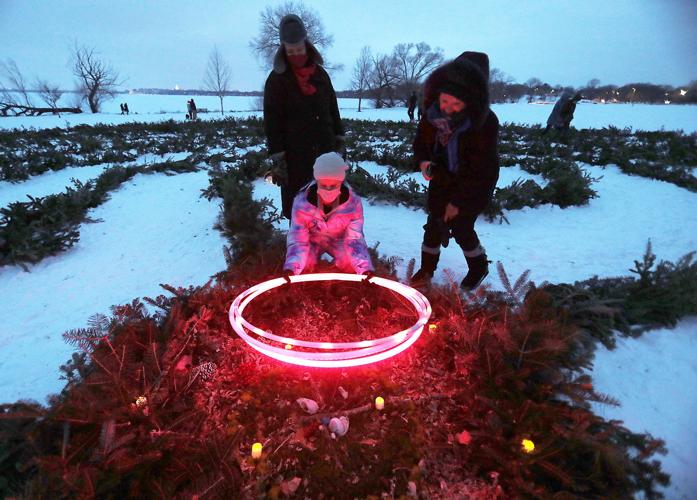 The center of “How Lovely Are Thy Branches” is illuminated by lighted hoops during a dedication ceremony. The labyrinth will remain at Olbrich Park through February. 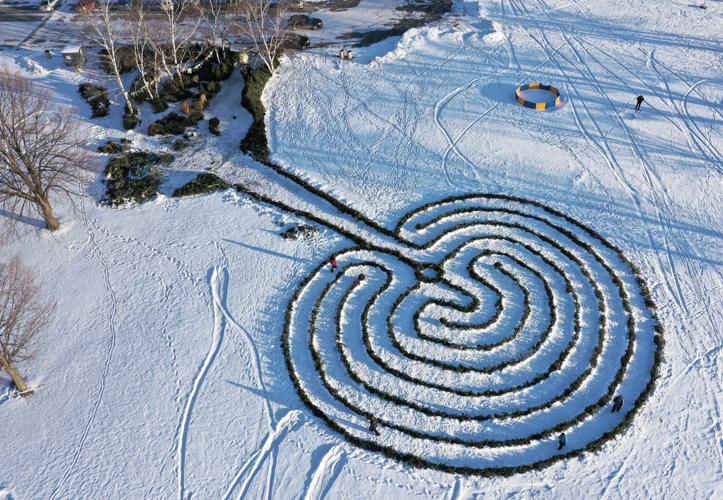 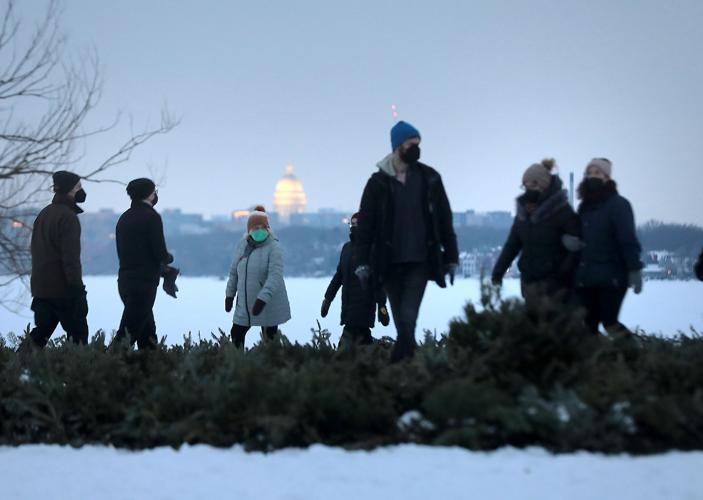 The state Capitol building and Lake Monona frame the scene as visitors to Olbrich Park walk the temporary labyrinth "How Lovely Are Thy Branches." 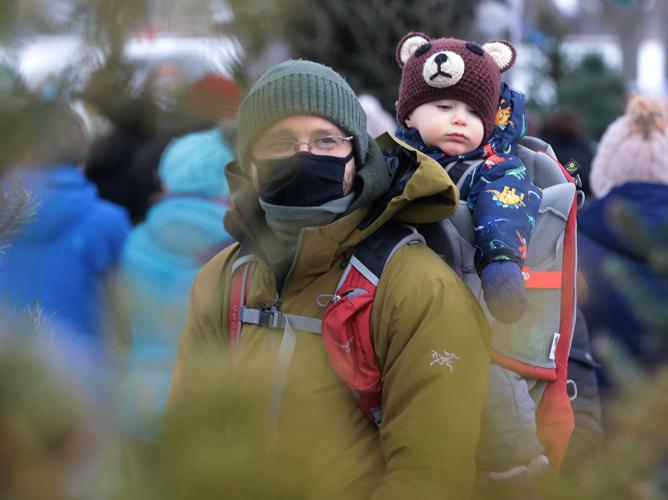 John Graham and his son Ezra view a “museum” of various Christmas tree varieties during the public opening for “How Lovely Are Thy Branches.” 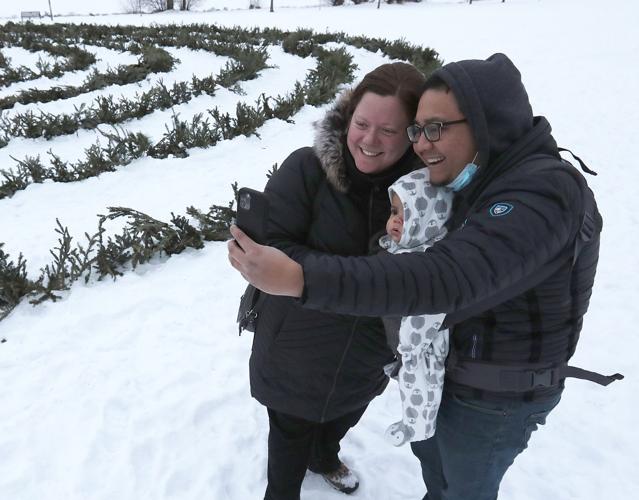 Melissa and Yahya Rushdi capture a photo of themselves and their 6-month-old son, Luke, during the public opening Sunday for the art installation “How Lovely Are Thy Branches” at Olbrich Park. 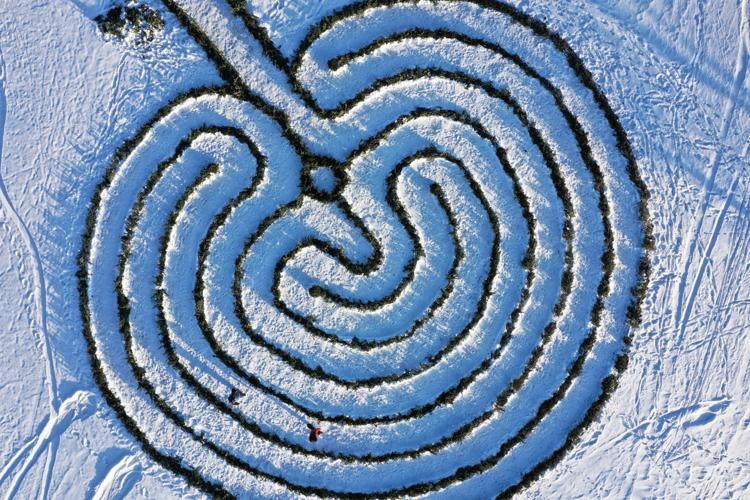 The paths of the temporary labyrinth at Olbrich Park bend back upon themselves, creating a path of quiet contemplation. 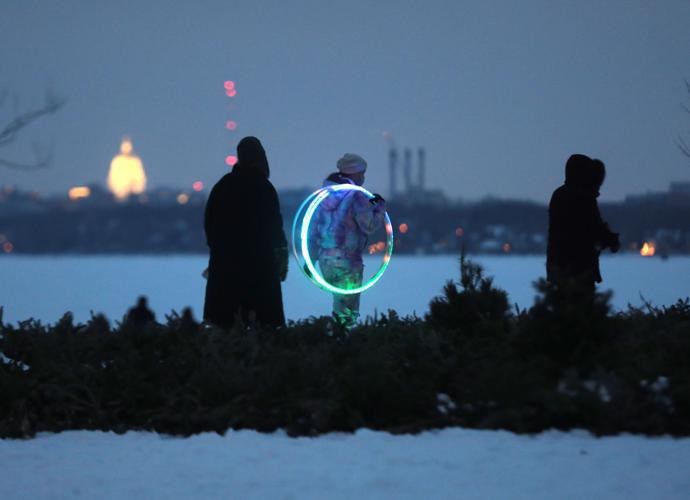 Visitors to the public opening Sunday for “How Lovely Are Thy Branches” walk through the public art installation at Olbrich Park after sunset.