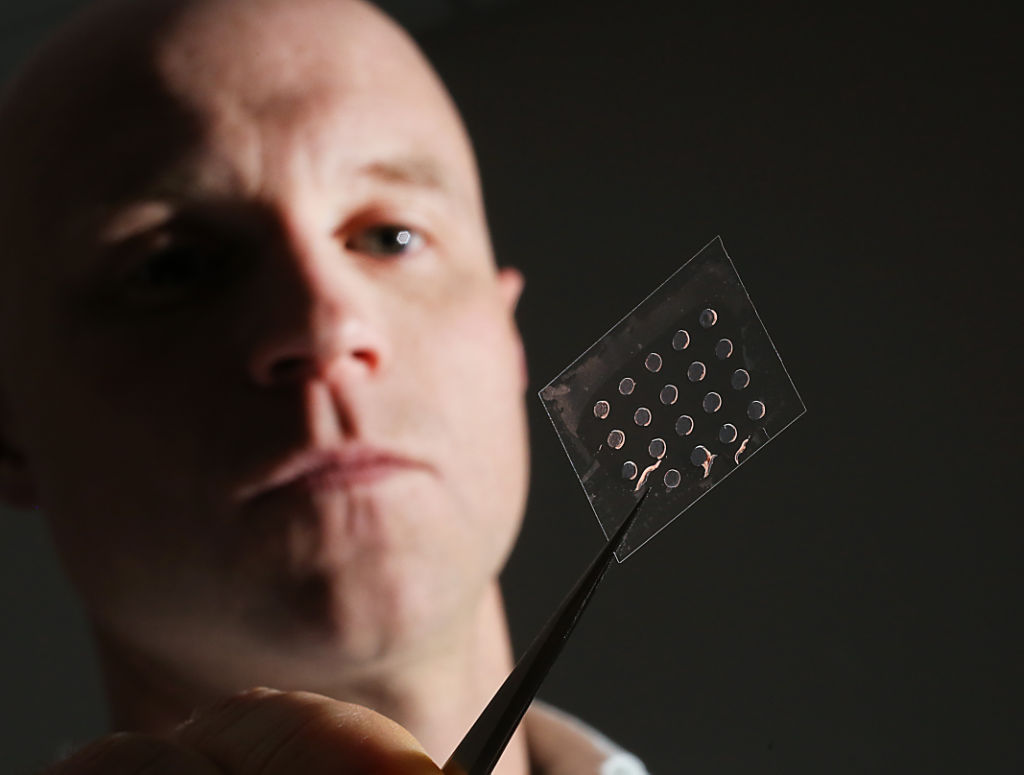 UW-Madison biomedical engineer Bill Murphy displays an array of synthetic hydrogels used to model human vascular tissue in his lab at the Wisconsin Institutes for Medical Research. Murphy, UW-Madison stem cell pioneer James Thomson and other researchers on campus are using stem cells and the hydrogels to develop "tissue chips" that could be used for drug and chemical testing. 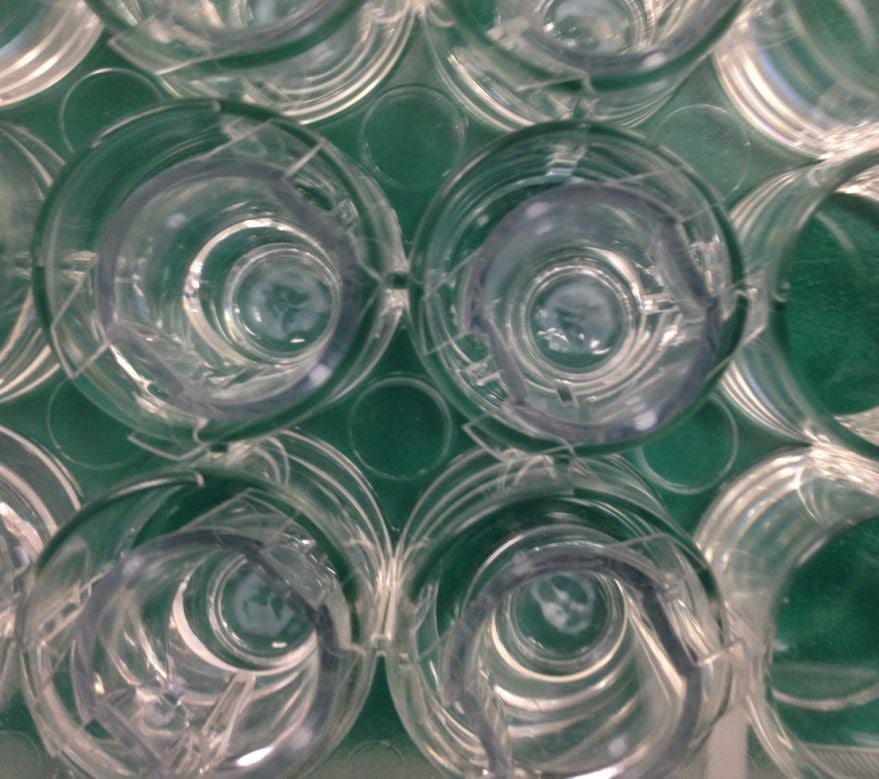 White, doughnut-shaped clusters of neural cells grow at the bottom of wells in plastic dishes, part of UW-Madison research to develop "tissue chips" for drug and chemical testing.

Drugs that seem safe in animal studies are sometimes found to be harmful in humans.

The health effects of many chemicals on the market — in products such as cosmetics, food additives and industrial and household cleaners — aren’t fully known.

“There’s a huge need to come up with better ways of testing compounds to see if they’re toxic,” said James Thomson, the UW-Madison stem cell pioneer.

Thomson, who first grew human embryonic stem cells in a lab in 1998 and co-discovered a way to reprogram mature cells to their embryonic state in 2007, is working with researchers across campus on a new quest.

About 80 percent of experimental drugs fail in human clinical trials because they are unsafe or ineffective, with some 30 percent found to be toxic in people despite promising results in animal studies, according to the National Institutes of Health.

Largely because of the expensive failures, it costs more than $1 billion to bring each successful drug to market, the NIH says.

Meanwhile, the European Union has started requiring toxicity testing of widely used chemicals. The U.S. Environmental Protection Agency launched a program to better screen the tens of thousands of chemicals currently in use.

Through a U.S. effort spanning multiple federal agencies, UW-Madison researchers have received $9 million from the NIH and applied for EPA funding to develop better drug and chemical testing methods.

In the NIH-funded work, the UW-Madison group is focusing on brain cells. Ten other universities are designing other kinds of tissue chips: Harvard scientists are working on a heart-lung model, a University of California, Berkeley team is working on the liver, and University of Washington researchers are concentrating on the kidney.

The hope is to eventually build a “human on a chip,” which could mimic multiple organ systems.

The project “has the potential to transform preclinical testing of candidate treatments,” Dr. Francis Collins, NIH director, said in September in a statement announcing the grants.

In recent years, as scientists have coaxed stem cells to grow into different cell types, they’ve seen the cells assemble into balls of organized tissue in lab dishes.

Stem cells typically grow on a gooey gel made from mouse tumors. Hydrogels are synthetic and can be as rigid as silicone.

“We’ve never been in a position before where we had the tools and capabilities to form human tissues in a dish that could adequately represent actual human tissues,” said Bill Murphy, a UW-Madison biomedical engineering professor working on the project. “This extends from discoveries made over the past 10 or 15 years.”

“It’s not exactly a little brain, but it has a lot of the cell-cell interactions that your brain would have,” Thomson, director of regenerative biology for the Morgridge Institute for Research, said during a public talk about the research on campus last fall.

Murphy and Thomson worked with David Page, a UW-Madison biostatistician who developed a computer program to detect changes in the expression of some 20,000 genes when the tissues are exposed to toxins.

The cost of measuring such gene expression has dropped dramatically in recent years, to about $20 per sample today, Thomson said.

The researchers tested 35 known toxins, such as arsenic and benzene, and 26 non-toxins, including arabinose and lactose. They found their system to be 93 percent accurate in predicting toxicity, better than animal models, Thomson said.

In a “blinded” test on 10 chemicals for which toxicity wasn’t revealed, their system was correct nine times. It labeled one non-toxic chemical toxic, erring on the safe side.

Now the researchers are developing a robotic system to enable the tissue chips to screen many compounds at the same time.

Murphy, Thomson and other UW-Madison scientists are also developing tissue chips of the liver and vascular systems that could be used in screening chemicals.

Substances such as asbestos, lead, phthalates and volatile organic compounds are known to be harmful. But of the tens of thousands of chemicals in use, “only a small fraction ... have been evaluated fully for potential human health effects,” according to the EPA.

Whether tissue chips might replace animal studies in drug or chemical testing remains to be seen, but that is one of the major goals, Murphy said.

Three-dimensional “tissue chips,” grown from stem cells on tiny scaffolds, could become a new way to screen drugs and chemicals for toxicity, …

UW-Madison biomedical engineer Bill Murphy displays an array of synthetic hydrogels used to model human vascular tissue in his lab at the Wisconsin Institutes for Medical Research. Murphy, UW-Madison stem cell pioneer James Thomson and other researchers on campus are using stem cells and the hydrogels to develop "tissue chips" that could be used for drug and chemical testing.

White, doughnut-shaped clusters of neural cells grow at the bottom of wells in plastic dishes, part of UW-Madison research to develop "tissue chips" for drug and chemical testing.