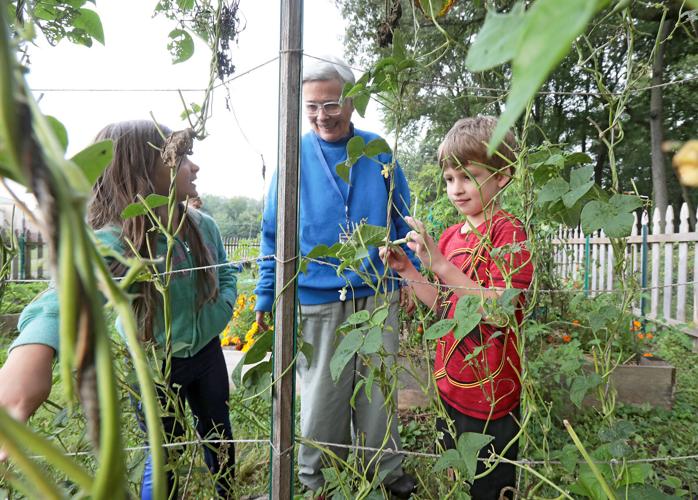 Cambridge Elementary School volunteer Georgia Gomez-Ibanez talks to students Reyna Schmidt and Charlie Becker as they harvest beans from a garden at the school. Students are encouraged to take what they learn in the school's garden home to their families. 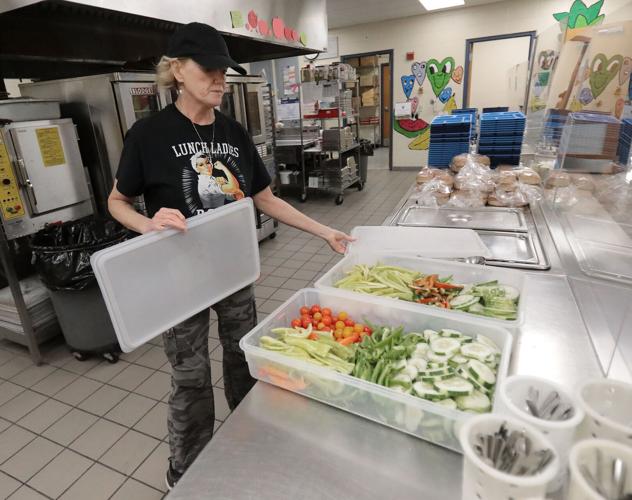 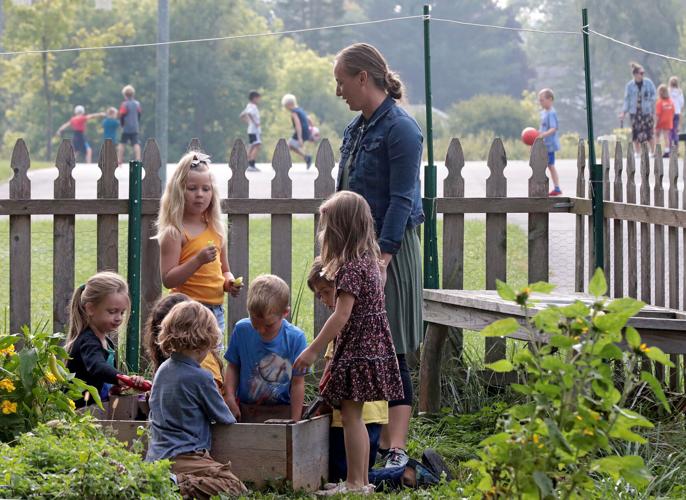 Students at Cambridge Elementary School tend a garden outside the school.

CAMBRIDGE — On a foggy late summer morning outside a suburban Dane County elementary school, kindergarten students explored the school’s fresh fruit and vegetables during “garden time,” as fourth-graders ran laps around the school’s adjacent soccer field to warm up for physical education class.

Cambridge Elementary School’s efforts to educate young students on healthy choices has been a priority for almost a decade, worked into the curriculum to combat rising rates of obesity among young children and adolescents in Wisconsin.

Health experts say the isolation and lack of access to healthy food and school gym class during the pandemic have made it worse. They’re anticipating a significant jump in the percentage of youth who are considered obese as children make their way back to appointments with general practitioners. In response to the growing problem, school districts across the state are adopting methods to teach students how to begin and maintain a healthy lifestyle.

Cambridge was recently designated a Green Ribbon school through the U.S. Department of Education and a Green and Healthy School by the Wisconsin Department of Public Instruction, two awards marking the school’s efforts to promote healthy living within the school community.

Students grow and harvest fresh fruits and vegetables from their school garden, hike on a wooded trail connected to their playground and are introduced to seasonal outdoor activities such as kayaking and snowshoeing to promote healthy living habits that school staff hope will follow them through life.

The rate of obesity among children in the Women, Infants and Children Program (WIC) between the ages of 2 and 4 in Wisconsin has also been on a steady increase since 2016, when 14.3% of that population was considered obese. Most recent data provided by the CDC for the age range was 2020, when 15.2% was considered obese.

Health officials say obesity could be more prevalent among low-income families that qualify for WIC, due to a lack of access to fresh and healthy foods and the prevalence of “food deserts” in low-income areas, which could lead to a reliance on fast food restaurants or corner stores for quick and affordable meals.

And the rate of obesity among children is expected to rise significantly due to the COVID-19 pandemic, according to the Wisconsin Department of Health Services.

“Some of the national studies are showing that the rates of childhood obesity are increasing and in some cases doubling,” said Mary Pesik, nutrition expert with the Wisconsin Department of Health Services. “I think we would expect some that same increases in childhood obesity to be happening here in Wisconsin.”

That data isn’t readily available, Pesik said, because children have only recently begun to attend primary care checkups as the pandemic continues to wane. But she is anticipating that the rates of children who had excess weight may have accelerated during the health crisis after schools shut down and families began to limit physical and group activities such as sports playgroups.

Many tools to curtail childhood obesity and maintain childhood health, such as playgrounds, were abandoned in the early days of the pandemic, and online learning meant students did not have recess and physical education classes to help them stay active.

1 in 5 U.S. kids stricken with obesity as nation struggles for solutions to epidemic

Experts agree that lack of access to nutritious food, poor eating habits during the pandemic and weight-related stigma are worsening childhood…

The Wisconsin Department of Public Instruction routinely audits the nutrition of school lunches through visits to each school at least once every five years. During the pandemic, the agency shifted to Zoom interviews and phone calls with school administrative officials to make sure school meals provided to students were adequately nutritious.

Children need access to affordable healthy food items, fresh fruits and vegetables and other healthy food options both in and outside of the classroom, Pesik said.

One out of six children are food insecure, which means consistent meals aren’t available, according to DPI.

Located in a city with roughly 13 food deserts, according to the 2019 Fresh Food Access Report by the City of Milwaukee, Escuela Verde has aimed to promote healthy and sustainable living through curriculum since its launch in 2012. The school had an enrollment of 119 students, 92.4% of whom were considered economically disadvantaged, during the 2020-21 school year, according to DPI.

The independent charter high school, in Milwaukee’s Menomonee Valley neighborhood just south of Highway 94, was also awarded the Green Ribbon designation by the USDE for its work to promote healthful living.

Wisconsin Watch reported this month that 10% of Wisconsin residents live in areas meeting the standards of a food desert, according to the U.S. Department of Agriculture.

Students at Escuela Verde tend to base their studies on food through capstone projects such as finding a way to grow fresh fruits and vegetables in an area without much green space.

One year, a student developed a green wall where fresh herbs grew, another focused on hydroponics, and another explored ways to make traditional Mexican desserts healthier by substituting plant-based ingredients, said Joey Zocher, one of the school’s founding advisers.

After lunch, where all food options are vegetarian, students are allotted time during which they’re encouraged to take part in wellness activities. Those activities often include playing basketball or soccer, taking part in yoga classes, or riding bicycles or going for a walk on the Hank Aaron State Trail adjacent to the school.

“There’s a variety of things with the goal of helping our students and staff to think about what do you need to think about your health,” Zocher said.

At Horlick High School in Racine, staff members used federal grant money to buy hydroponic growers. Culinary pathway students began working with the growers near the end of the 2021-22 school year and even sold homegrown salads in school on Fridays.

Hydroponically grown vegetables could play a small role in providing access to healthy food, especially in urban areas like Racine. More than 70% of Horlick’s students are considered economically disadvantaged.

“Living in a food desert here, it’s not super easy for people to get to some place that will offer healthy food,” said Ana Moreno, Horlick business and culinary arts academy counselor. “These are lifelong skills …. We’re trying to teach that importance of not only eating healthy, but that healthy food can taste delicious.”

Ryan Patterson from The (Racine) Journal Times contributed to this report.

States with the most physically active teens

Regular exercise is critical to young people’s physical and mental health, and correlates not only to greater fitness and lower risk of obesit… 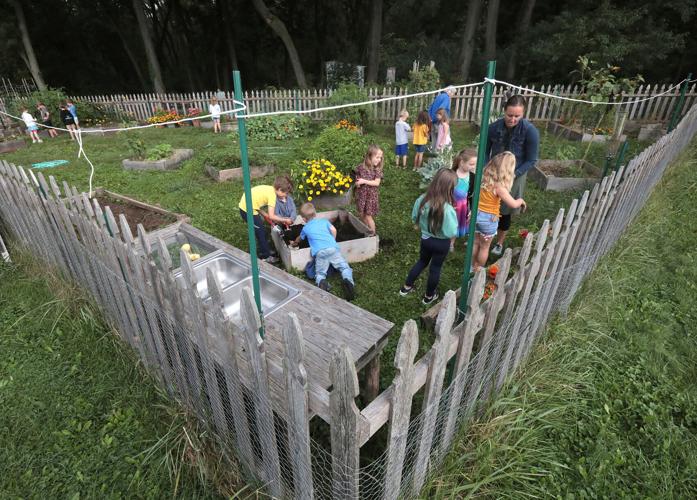 Students at Cambridge Elementary School tend a garden outside the school in Cambridge. The school has a number of outdoor spaces to promote active living and nutrition, such as the garden, hiking trails in a wooded area, and an outdoor classroom. The school is trying to combat childhood obesity, a national problem that some experts say was worsened by the COVID-19 pandemic. 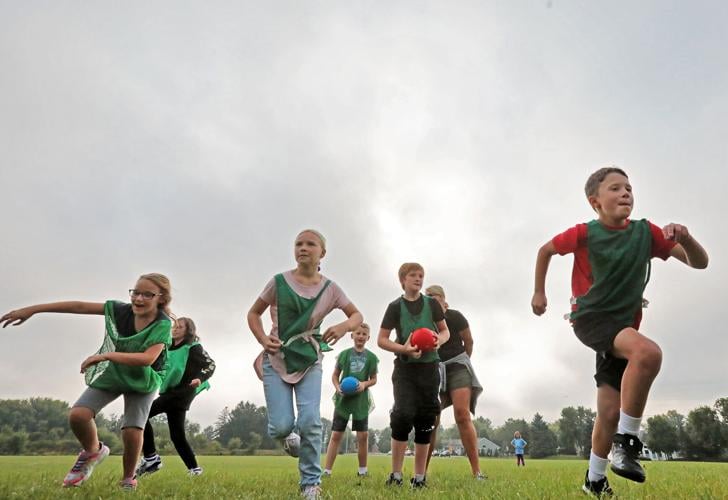 Students at Cambridge Elementary School participate in physical education. Gym class consists of seasonal lessons, such as kayaking in the warmer months and snowshoeing in the winter, to help introduce students to outdoor activities.

Cambridge Elementary School volunteer Georgia Gomez-Ibanez talks to students Reyna Schmidt and Charlie Becker as they harvest beans from a garden at the school. Students are encouraged to take what they learn in the school's garden home to their families. 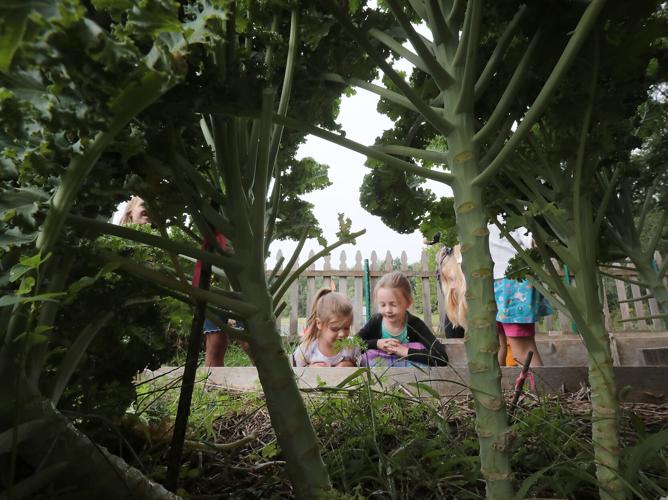 Stalks of kale growing in a student garden at Cambridge Elementary School frame Ruby Lucke and Bodhi Wiesmann during a class visit to the collection of produce plots.

Students at Cambridge Elementary School tend a garden outside the school. 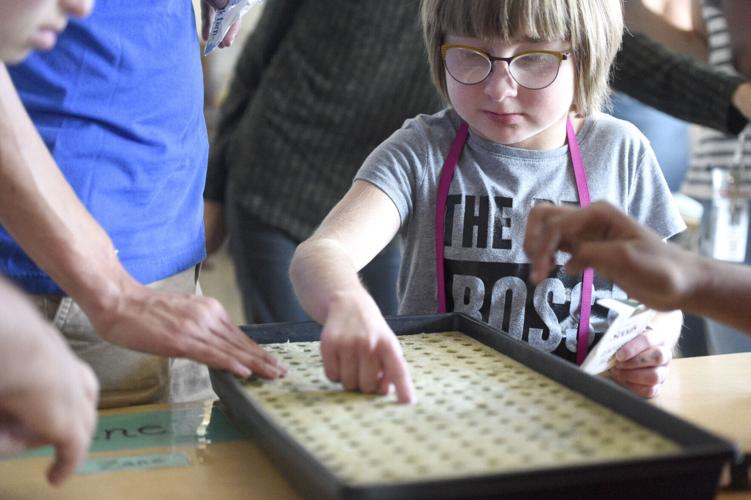 Holly Szymczak plants seeds in rockwool, which is the first step in the 28-day hydroponic growing process at Horlick High School in Racine. 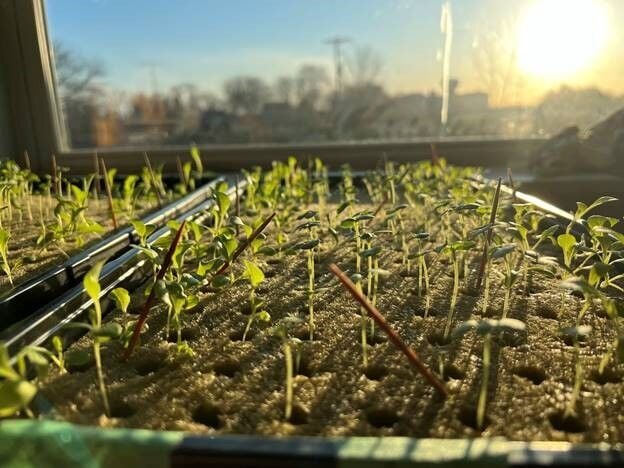