NEW YORK — McDonald's is taking cheeseburgers and chocolate milk off its Happy Meal menu in an effort to cut down on the calories, sodium, saturated fat and sugar that kids consume at its restaurants.

Diners can still ask specifically for cheeseburgers or chocolate milk with the kid's meal, but the fast-food company said that not listing them will reduce how often they're ordered. Since it removed soda from the Happy Meal menu four years ago, orders for it with Happy Meals have fallen 14 percent, the company said. Hamburgers and Chicken McNuggets will remain the main entrees on the Happy Meal menu.

The Happy Meal, launched nearly 40 years ago, has long been a target of health advocates and parents who link it to childhood obesity. McDonald's has made many tweaks over the years, including cutting the size of its fries and adding fruit. Most recently, it swapped out its apple juice for one that has less sugar.

It's been especially important as the company tries to shake its junk-food image, since McDonald's is known for getting more business from families with children relative to its traditional rivals, such as Burger King and Wendy's. McDonald's doesn't say how much revenue it makes from the $3 Happy Meal, but the company said 30 percent of all visits come from families.

The latest Happy Meal changes, including new nutritional standards, will occur in the United States by June.

"It's a good step in the right direction," said Margo Wootan, the vice president for nutrition at the Center for Science in the Public Interest. "We would love to see many more restaurants do the same."

McDonald's said Thursday that it wants all its Happy Meal options to have 600 calories or fewer and have less than 650 milligrams of sodium. It also wants less than 10 percent of the meal's calories to come from saturated fat and the same percentage to come from added sugar.

The cheeseburger and chocolate milk didn't meet those new standards, the Oak Brook, Illinois-based company said. It is, however, working to cut sugar from the chocolate milk and believes it'll be back on the Happy Meal menu eventually — but doesn't know when that will happen.

There will be other tweaks: The six-piece chicken nugget Happy Meal will now come with a kids-sized fries instead of a small, lowering calories and sodium from the fries by half. And bottled water will be added as an option to the Happy Meal menu, but will cost extra. Currently, the Happy Meal menu lists milk, chocolate milk and apple juice. Soda does not cost extra.

For international restaurants, McDonald's Corp. said that at least half of the Happy Meal options available must meet its new nutritional guidelines. The company said some are adding new menu items to comply, like in Italy, where a grilled chicken sandwich was added to the Happy Meal menu.

Chicken Run does very few things, but does them well.

Gov. Scott Walker’s $200 million plan to help lower premiums for people buying insurance on the private marketplace won bipartisan approval Tuesday from a key legislative committee, but the panel punted on finding a way to pay for it.

Better training and ID checking has had a positive effect on the numbers of minors getting away with buying cigarettes, tobacco products and nicotine products, according to local health officials. 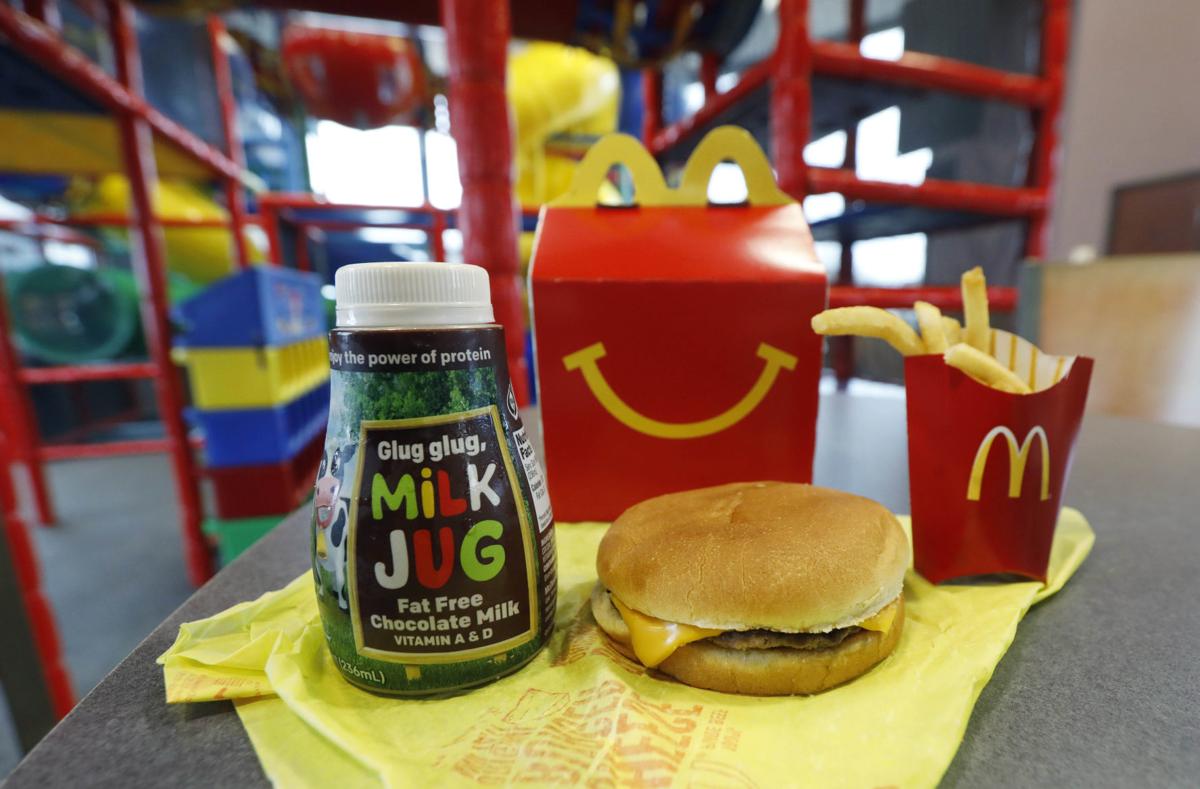 A Happy Meal featuring non-fat chocolate milk and a cheeseburger with fries, are arranged for a photo at a McDonald's restaurant in Brandon, Miss., Wednesday, Feb. 14, 2018. McDonald’s will soon banish cheeseburgers and chocolate milk from its Happy Meal menu. Diners can still ask specifically for cheeseburgers or chocolate milk with the kid's meal, but the fast-food company said that not listing them will reduce how often they're ordered. (AP Photo/Rogelio V. Solis) 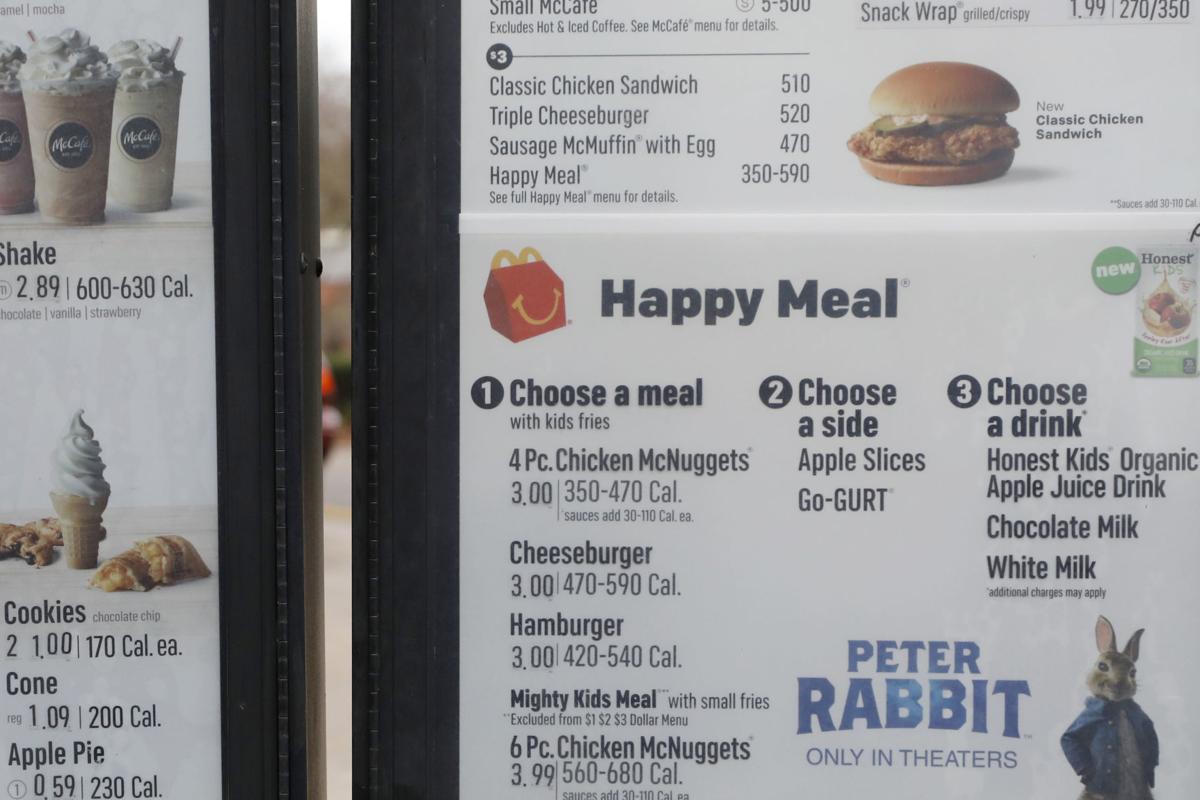 A portion of a drive thru menu panel featuring Happy Meals is seen at a McDonald's Restaurant in Ridgeland, Miss., on Wednesday, Feb. 14, 2018. The company will soon banish cheeseburgers and chocolate milk from its Happy Meal menu in an effort to cut down on the calories, sodium, saturated fat and sugar that kids consume at its restaurants. Diners can still ask specifically for cheeseburgers or chocolate milk with the kid’s meal, but the fast-food company said that not listing them will reduce how often they’re ordered. (AP Photo/Rogelio V. Solis) 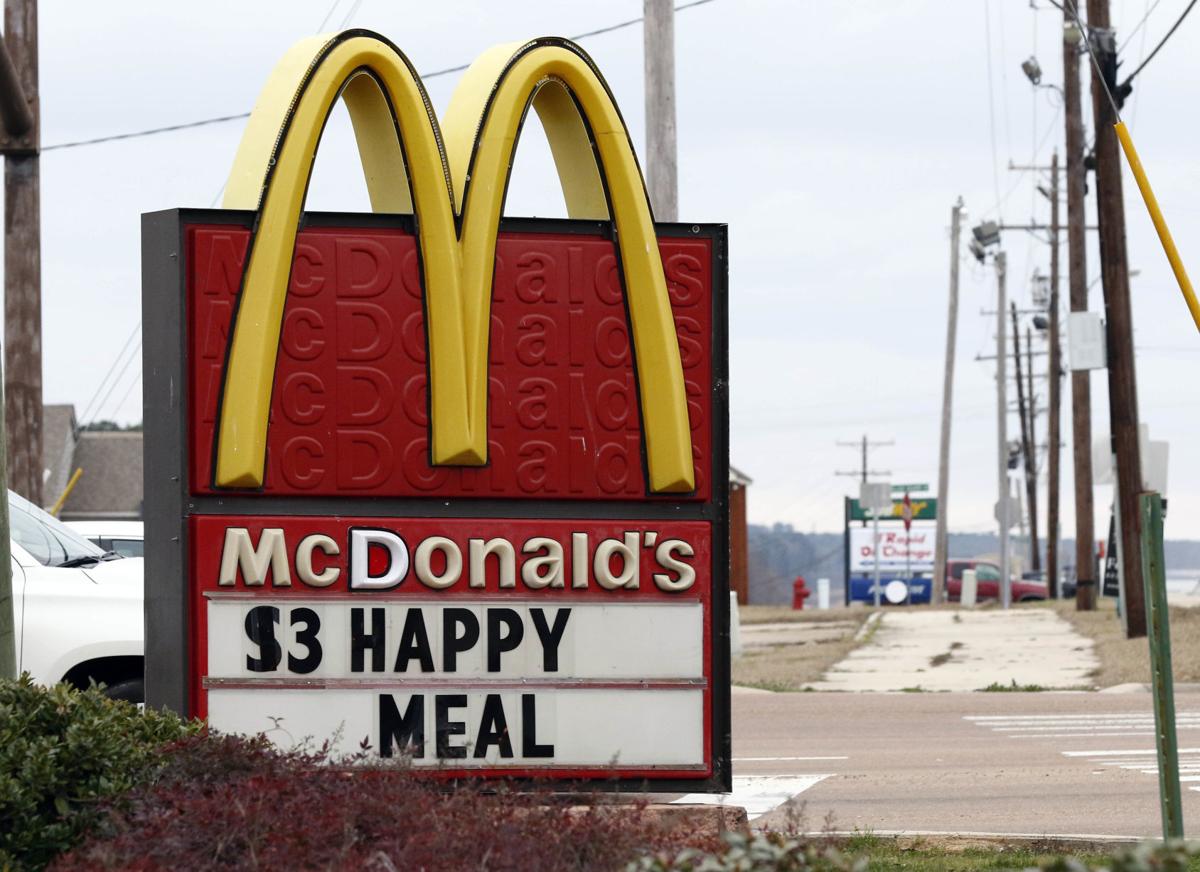 A $3 Happy Meal is advertised at a Brandon, Miss., McDonald's Restaurant, Wednesday, Feb. 14, 2018. McDonald's will undergo some changes as the cheeseburger choice and chocolate milk will be removed from the menu panels in stores, but the fast-food company says not listing the items will cut down on orders, as they make an effort to get kids to eat less calories, sodium, saturated fat and sugar at its restaurants. Parents will still be able to ask for a cheeseburger with the kid's meal, (AP Photo/Rogelio V. Solis)