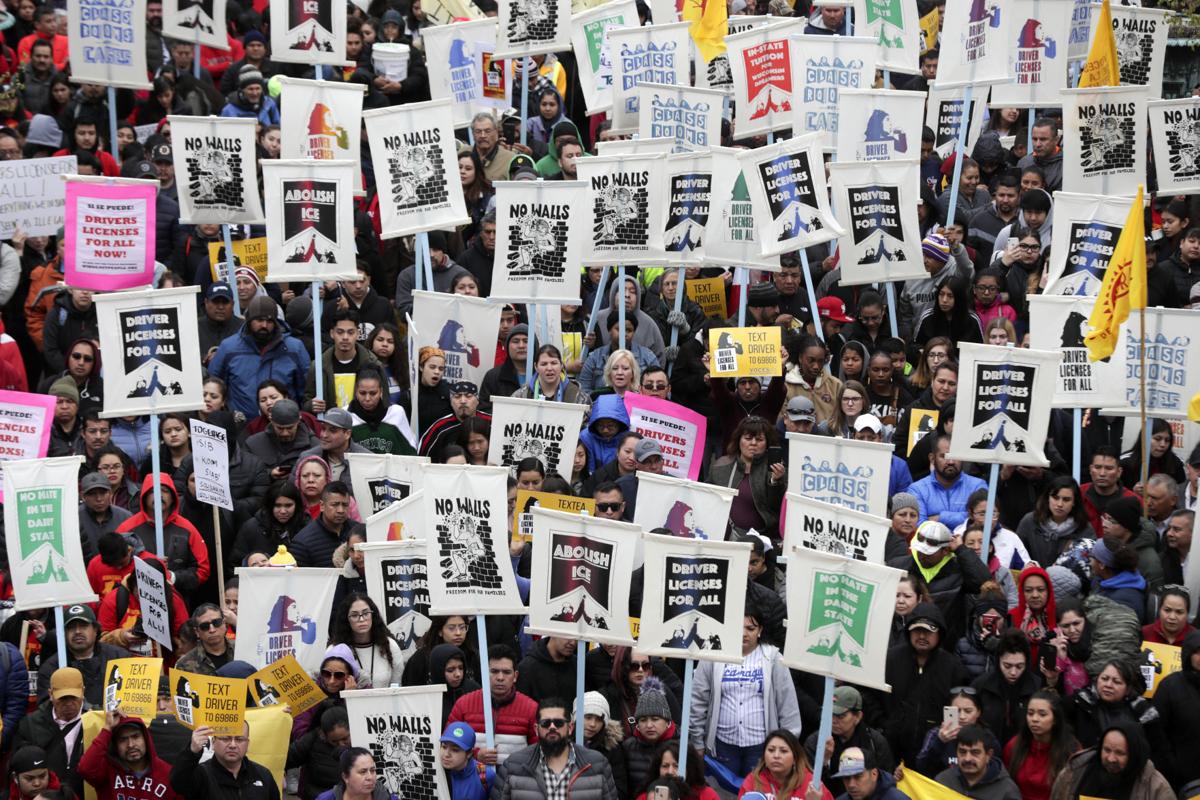 Thousands of immigrants and their supporters converged on May 1, 2019, on the Wisconsin Capitol to urge Republican support for making driver's licenses available to all, including people living in the country illegally. Both presidential campaigns are actively courting the growing Hispanic vote in the state. 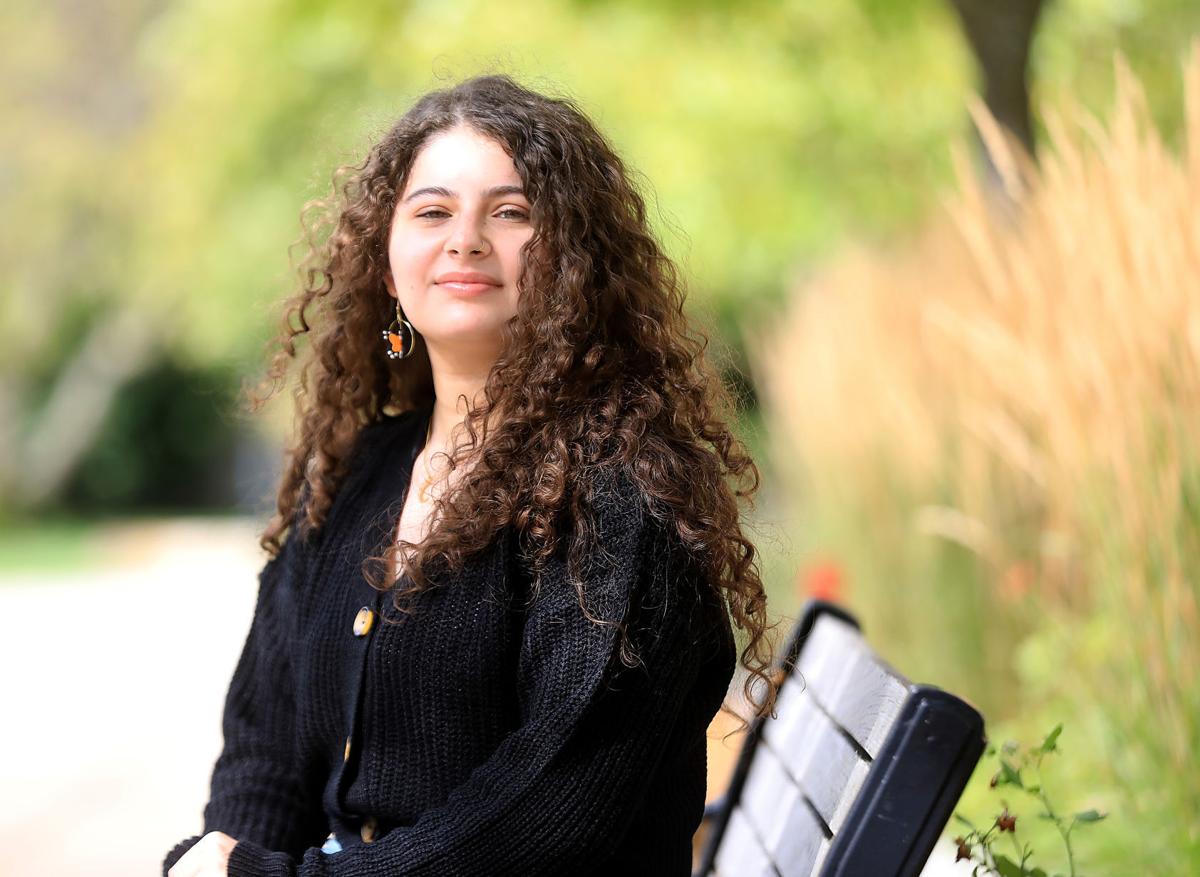 Nadxely Sanchez plans to vote for Joe Biden, but his lack of support during the Democratic primary for a clear path to citizenship for immigrants, particularly those who were brought here as children, initially discouraged her from supporting him. 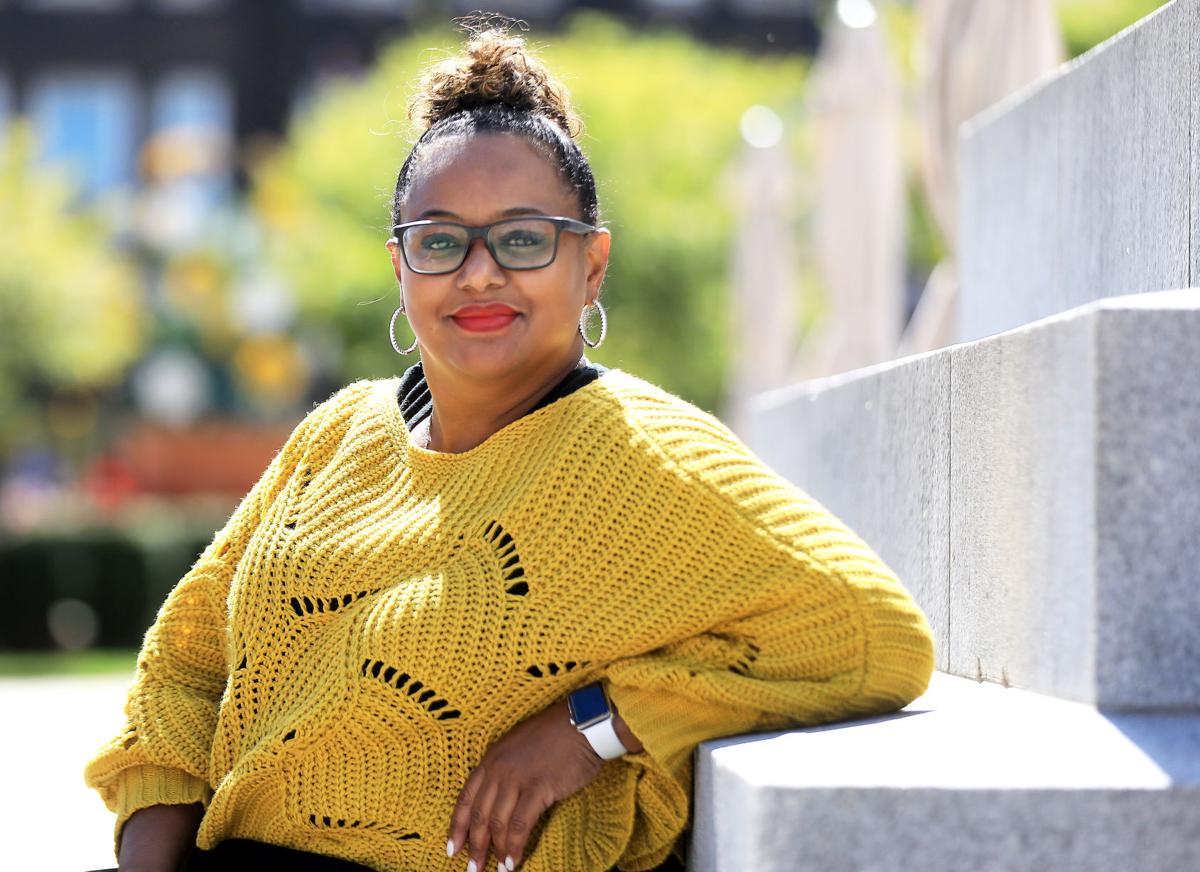 Damaris Perez Maldonado, of Racine, said a lot of Hispanic voters would not even utter the word "Trump" six months ago, "but some of them are coming out of the closet saying 'Well I didn't support him last time, but I support him now.'"

Both presidential campaigns see Wisconsin’s growing Hispanic population as an important voting bloc in the upcoming election, but they are not a monolithic group, and young voters are divided and disheartened by their choices.

President Donald Trump has long antagonized the Mexican immigrant community, labeling those crossing the border illegally as drug dealers, rapists and “some … good people” when he launched his 2016 campaign. During his presidency his administration separated families and imprisoned children as part of a crackdown on illegal border crossings.

But former Vice President Joe Biden hasn’t necessarily capitalized on Trump’s rhetoric and actions. Nadxely Sanchez, a Milwaukee resident who turned 19 in September, said Biden’s lack of support during the Democratic primary for a clear path to citizenship for immigrants, particularly those who were brought here as children, initially discouraged her from supporting him.

“He didn’t give clear answers and he didn’t give answers that many of my friends, and people who I know are voting, were hoping for,” she said. “But because he is the only other (major party) candidate going against Trump, you kind of feel obliged to vote for him, even though he’s not our top choice.”

The Hispanic electorate is the fastest-growing demographic in Wisconsin, particularly in the southeastern region of the state. According to the U.S. Census Bureau, the percentage of Wisconsinites who identify as Hispanic has almost doubled since 2000, from 3.6% to 7.1% last year.

But historically the group has not been courted by presidential campaigns, according to Christine Neumann-Ortiz, executive director of Voces de la Frontera, a statewide advocate for immigrant and low-wage worker rights based in Milwaukee.

As Hispanic voters could play a big role in winning a key swing state in November, both presidential campaigns have stepped up culturally specific outreach efforts in an attempt to overcome the lack of enthusiasm felt by voters.

Neumann-Ortiz attributed the lack of resources devoted to win over Hispanic voters in Wisconsin in past elections to low turnout among Hispanic voters, as well as the still small population.

Hispanic voters made up 4% of Wisconsin voters in 2016 election exit polls. Of those surveyed, 63% voted for former Secretary of State Hillary Clinton and 34% cast their ballot for Trump.

A composite of Marquette Law School Poll results from August 2019 through September 2020 shows Biden leading Trump 55% to 30% among Hispanic voters, according to poll director Charles Franklin. The margin of error is +/-6 percentage points, signifying little shift from the 2016 results.

Despite his poor performance among Hispanics, some believe Trump has made inroads in recent months.

“A lot of people in the Latino community who, before the last six months, would not even utter the word ‘Trump’, some of them are coming out of the closet saying ‘Well I didn’t support him last time but I support him now,’” said Damaris Pérez Maldonado, a 49-year-old conservative voter from Racine. “I’ve been shocked at my own family and friends who have said, ‘Yeah we’re totally voting for Trump’ or many of them who say, ‘We’re just staying home because we just don’t like either one of them.’”

Pérez Maldonado said friends and family pointed to recent unrest after police shootings of Black Americans across the country, as well as COVID-19-related stimulus payments, when asked why they plan to support Trump in the upcoming election. But delays in the next round of stimulus payments could also sway voters.

“A lot of people really translate that as ‘Trump sent me a check,’” she said. “Most people are waiting for the next one and if that doesn’t come through I think they’ll either vote against Trump or stay home.”

In Milwaukee, a number of low-income districts and those predominantly populated by people of color saw a significant decrease in voter turnout between the 2012 and 2016 elections. But, districts with significant Hispanic populations didn’t see as sharp a decrease, in part because of culturally specific voter outreach efforts in down-ballot races.

Both parties have taken notice.

The Wisconsin GOP recently opened a field office in the Historic Mitchell Street Neighborhood of Milwaukee, an area with a majority Hispanic population, to supplement past party efforts to engage voters. They’ve conducted more virtual events, amid COVID-19, as well as some in-person events to push Trump’s reelection platform and they’re focusing on economic issues which they believe will motivate the electorate.

“A lot of these folks came from countries that experienced government socialism and its effect on their communities and they contrast with President Trump’s agenda,” said Mark Jefferson, executive director of the Republican Party of Wisconsin. “I think those contrasts play well with center right and swing voters so where there are opportunities, we need to be aggressive and take advantage of them.”

Rep. JoCasta Zamarripa, D-Milwaukee, a Biden surrogate and member of the campaign’s National Latino Leadership Committee, outlined a number of national and Wisconsin-specific voter initiatives that launched online during this campaign, including a social media strategy to target young Hispanic voters; weekly Spanish language phone banks in Wisconsin; the rollout of a Hispanic-specific agenda; the launch of Todos con Biden, a statewide coalition of Hispanic voters; and a racial and equity roundtable.

“These conversations, this roll out are imperative so that our people can have that discussion, that conversation of what we expect moving forward,” Zamarripa said.

She said the stark contrast between the two candidates regarding the Deferred Action for Childhood Arrivals program, or DACA, a wedge issue among Hispanic voters, has become a flashpoint that has motivated younger members of the demographic.

Trump’s attempt to end DACA was struck down by the U.S. Supreme Court in June, but it remains in the forefront of the minds of young Hispanic voters as they plan to cast their ballots in November.

A number of Sanchez’s friends are DACA recipients, a fact that will inform how she votes for the first time in a presidential race.

“It makes me hyper-aware of the candidate’s policy, their outlook toward DACA and how they’ll handle it once they take the presidency,” she said.

The embattled program was enacted by the Obama administration in 2012 to protect undocumented immigrants, who arrived in the U.S. as children, from deportation. Trump attempted to follow through on a 2016 campaign promise to dismantle DACA by ordering the program to end in September 2017 but was challenged in court by a number of plaintiffs.

By the time the battle reached the U.S. Supreme Court, nearly 700,000 young immigrants sought protection from deportation through the program, thousands of whom reside in Wisconsin. In June, the high court determined the Trump administration had not followed the proper protocol to end DACA in a 5-4 vote, allowing the program to remain in place for the time being.

Trump said in June that he plans to attempt to end the program again and denounced the Supreme Court decision in what has become a rallying cry for many young Hispanic voters as they plan to vote against the incumbent this fall. But Trump’s approach has worked for some.

Alex Ledezma, a 25-year-old Madison resident and college student, said he plans to vote for Trump in the upcoming election, regardless of his attempt to end DACA. Ledezma, who is a first-generation American, said Republicans and Democrats have punted on immigration for decades. He believes the incumbent was the first president to attempt to fix what Ledezma called a broken system.

“No one has actually gone to the root cause of this issue, everyone is just trying to fix the surface,” he said. “The law is, if you come here illegally unfortunately you face deportation.”

According to a recent Pew Research Center poll, 59% of registered voters who identify as Hispanic said that immigration was very important to their vote in the 2020 presidential election.

The Trump campaign’s rhetoric against members of Hispanic communities during the 2016 election and his administration’s subsequent separation of families at the border, as well as his attempt to end DACA, could work against him come fall. Republican Party leaders in Wisconsin noted the incumbent must be more careful with his words this election cycle.

Republicans have to be cognizant of how we say things, Jefferson said, of Trump’s effort to win over Hispanic voters. “We have to be careful to differentiate between folks who played by the rules and those who came in the country illegally,” he said.

Biden’s record as vice president could discourage young Hispanic voters as well, because of the significant number of deportations that took place during the Obama administration.

“I know that there’s that pain,” Zamarripa said. “There is some hurt there and we need to have that dialogue” between the Biden campaign and Hispanic communities.

Voces de la Frontera Acción created Voceros por el Voto (Spokespersons for the Vote) in 2018 to focus on voter outreach within Wisconsin’s Hispanic communities. That year, 400 spokespersons were organized over a six-week period to help educate voters ahead of the midterm elections in Wisconsin. The Voceros then branched out to build a network of voters within their communities and encouraged those voters to branch out as Voceros as well.

In August 2020, the Vocero program boasted a combined network of roughly 13,500 voters and outreach members, with the goal of getting to 23,000 voters by November, Neumann-Ortiz said.

The Democratic Party hopes to tap into those 23,000 voters to help Biden in Wisconsin in November. Vice presidential nominee Sen. Kamala Harris, D-Calif., gained the organization’s endorsement after a closed-door meeting with members in early September.

“When the margins are so small (like they were in 2016), the Latino vote is absolutely essential to determining elections,” Neumann-Ortiz said.

Also on Wednesday, five voters in Madison asked a judge to declare that a city-organized event to collect absentee ballots was legal.

Thousands of immigrants and their supporters converged on May 1, 2019, on the Wisconsin Capitol to urge Republican support for making driver's licenses available to all, including people living in the country illegally. Both presidential campaigns are actively courting the growing Hispanic vote in the state.

Nadxely Sanchez plans to vote for Joe Biden, but his lack of support during the Democratic primary for a clear path to citizenship for immigrants, particularly those who were brought here as children, initially discouraged her from supporting him.

Damaris Perez Maldonado, of Racine, said a lot of Hispanic voters would not even utter the word "Trump" six months ago, "but some of them are coming out of the closet saying 'Well I didn't support him last time, but I support him now.'"