Since the 2020 presidential election, Florence County Clerk Donna Trudell said she has fielded about two calls a week from people concerned that hackers will break into voting machines in the county to change votes from one party to another in future elections.

To ease those concerns, Trudell, who was a deputy clerk for 10 years and county clerk for the last nine, bought new voting machines without modems to assure callers the devices cannot connect to the internet.

But the calls keep coming, and now include many voters skeptical that she has really ordered voting machines without modems. Never mind that there’s no evidence that voting machines that do connect to the internet have ever been hacked to change votes in Wisconsin or anywhere else. Or that some clerks in Florence County — where former President Donald Trump beat President Joe Biden by a nearly 3-to-1 margin — have even held public training sessions to show how the new voting machines work.

“People still have hesitancy,” said Trudell, one of Wisconsin’s 1,850 municipal clerks and 72 county clerks who manage polling places, hire poll workers and abide by election laws enforced by the Wisconsin Elections Commission. “We’re trying to relieve that, but I don’t know ... how to do that.”

Across the state and nation, election clerks have been facing unprecedented scrutiny since the 2020 elections. Much of that pressure comes from unsubstantiated claims about widespread fraud. And in Wisconsin, the bulk of the scrutiny — and even threats — has been directed at the Wisconsin Elections Commission, election officials in the Democratic strongholds of Milwaukee and Madison, and to a lesser extent officials in Racine, Green Bay and Kenosha.

But even in Trump country, where the former president won by large margins or lost narrowly, some clerks are feeling the heat.

“Before the 2020 election, there wasn’t a skeptic around,” said Tracey Ferron, the city clerk in Beaver Dam, where Biden beat Trump by only a few dozen votes. Ferron has spent 14 years working in election administration for the city. “Now all of a sudden, there are because they didn’t get the results they wanted. So it’s frustrating.”

When people doubt processes and election results, Ferron said, she invites them to become poll workers so they can learn what goes on behind the scenes. Nobody has accepted her offer.

Still, Ferron said, she hasn’t let the stress get to her too much.

“I have confidence in the system,” she said. “And you know, we see all the back-end work. So I know how to stand my ground.”

Several clerks across the state told the Wisconsin State Journal as much: They remain confident in the knowledge that no widespread voter fraud has been proven to exist in the state — largely due to their own diligence in enforcing the multiple overlapping safeguards aimed at ensuring elections are secure and accurate.

Others are more affected.

“I pray a lot more,” said Shelly VanPembrook, for 14 years the clerk of the town of Florence, at the northeastern corner of the state.

Like Trudell and Ferron, VanPembrook said her job has become more difficult in the past two years.

VanPembrook said voters in Florence doubt the voting machines she uses; they’re more confident in her and her staff. But when she conducted a public voter machine training to alleviate voters’ concerns, the turnout was “extremely disappointing.”

Yet, people still doubt the machines, she said.

“You just feel like you’re under a microscope,” she said. “Well, you got to do your job. And it is ... probably the most important job that clerks do. And we just want to do our job well.”

Some have conflated policies or decisions on election administration that they opposed, or which weren’t explicitly authorized in state law, with fraud, even though some of the practices were consistent with past elections, were approved by government bodies in open session or were found to be legal by a court.

Those include grants from the Mark Zuckerberg-funded Center for Tech and Civic Life to help cover the cost of conducting an election during a pandemic. While the grants went to about 214 municipalities, including many that went for Trump, the bulk of the money went to the state’s five largest cities, which turned out strongly for Joe Biden. Multiple courts have ruled the grants were legal. The grants were also not denied to any municipalities that requested them.

Election deniers have even called for jailing members of the bipartisan Wisconsin Elections Commission for advising local clerks they could fix minor errors on ballot envelopes and use ballot drop boxes, which aren’t addressed in state law. The measures were approved by both Democratic and Republican members of the commission.

Almost two of every three local election officials nationwide believe false information is making their jobs more dangerous, according to a recent poll by the liberal Brennan Center for Justice. Asked the biggest reason retiring clerks wouldn’t continue in their jobs, the top answer was, “Too many political leaders are attacking a system that they know is fair and honest.”

On March 17, Assembly Speaker Robin Vos, R-Rochester, added fuel to the fire, asserting without evidence that there had been “widespread fraud” in 2020.

In her 20 years working for the Wisconsin Municipal Clerks Association, executive director Faith Elford said she has never seen as much turnover as in the years since 2020.

The stress resulting from 2020 election conspiracy theories isn’t the sole reason for all of those retirements and turnover, Elford said, but it’s a big part for some.

“It’s just not worth it to be getting snide remarks from your residents and phone calls and all that stuff,” she said. “We’re not paid enough to have to take that kind of bad stuff. It’s crazy.”

Once, she said, a voter alleging fraud asked Gossick if MyPillow CEO Mike Lindell had called her yet. Gossick said the voter told her that Lindell — whose baseless claims of fraud in the 2020 election led a voting machine company to file a defamation lawsuit against him — was contacting every clerk in the nation.

“I said, ‘No, I have not heard from him,’” said Gossick, who added that she would be happy to fulfill a public records request if Lindell ever files one.

Gossick said she showed that voter — along with the 15 to 25 people who she said have called her since the 2020 general election with voter fraud concerns — the work behind how votes are tabulated.

Unlike the other people whose calls she fielded, Gossick said the voter asking about Lindell still thought she was complicit in fraud despite Gossick showing her the proof behind her work.

“I can’t do anything about that,” Gossick said in an interview. “I can show you the process ... but there’s nothing further I can give you.”

Once, Gossick said, a voter sarcastically asked if people receive two ballots depending on what party they vote for. That’s despite Trump winning both Wood County and its county seat, Wisconsin Rapids.

Comments like those, she said, have taken a toll.

“But I just keep reminding myself, we work for the voters,” she said. “I just try to take each complaint one at a time. I say it’s like playing baseball. You deal with the pitch that’s in front of you.”

Gov. Tony Evers vetoes bill that would have enhanced penalties for rioters

Evers argued that his 10-year legislative maps are the only maps before the court that comply with federal law outlawing discriminatory voting practices.

UW-Madison Law School associate professor Robert Yablon said the Wisconsin Supreme Court's most likely next step be a decision on which map it chooses. 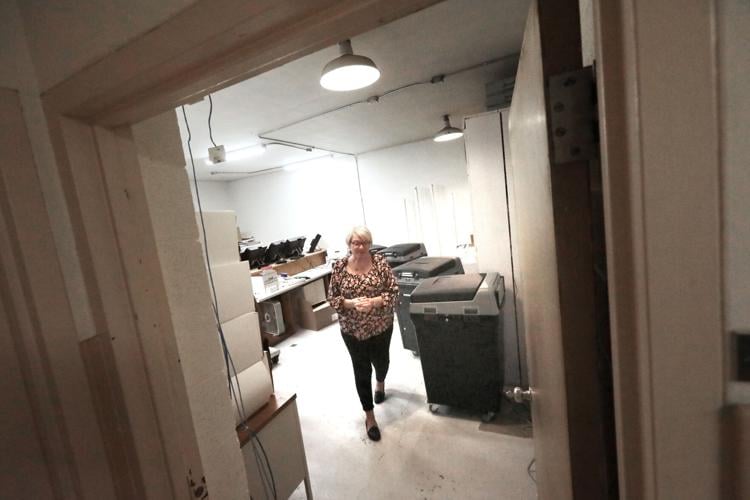 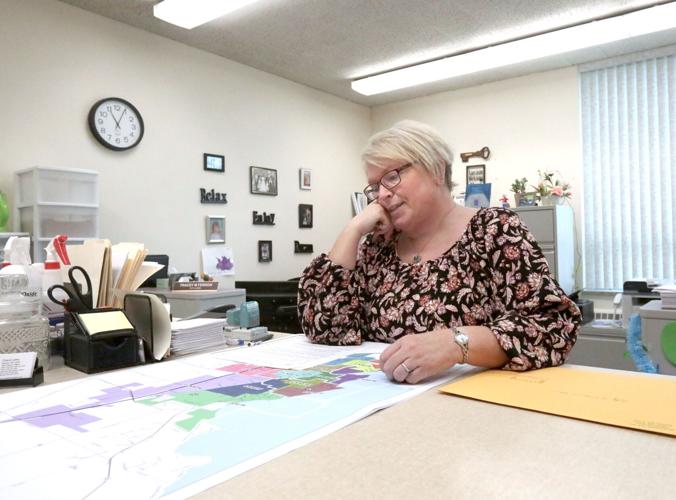 "Before the 2020 election, there wasn't a skeptic around," says Beaver Dam City Clerk Tracy Ferron. 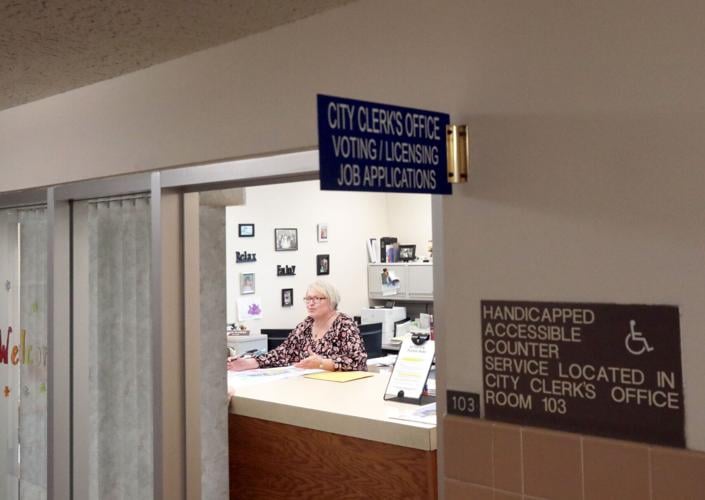 Clerks around the state say they have tried to answer questions from election skeptics and deniers, with little sign of being able to change their minds. 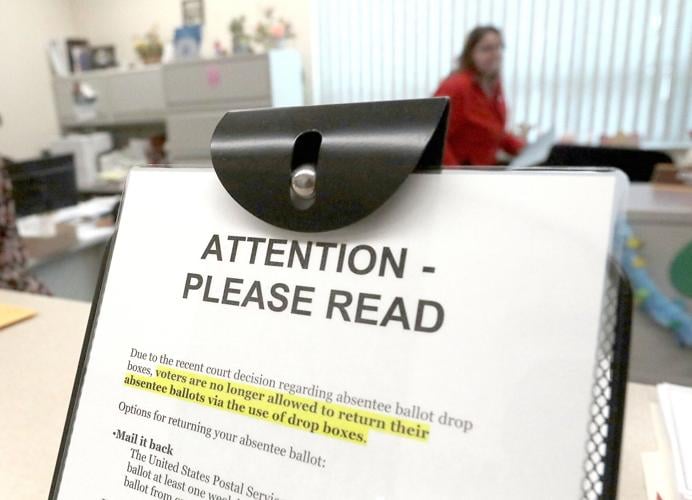 A sign informs voters that drop boxes outside the Beaver Dam municipal building will no longer be allowed for absentee ballots in upcoming elections.