MILWAUKEE — Wisconsin’s near-complete abortion ban adopted in 1849 lay dormant for so long, even as other abortion bans were passed, that courts should declare the earlier law unenforceable, Democratic Attorney General Josh Kaul argues in a lawsuit filed Tuesday.

While the 1849 law bans abortions from the time of conception unless it’s necessary to save a mother’s life, a subsequent law enacted in 1985 — years after the U.S. Supreme Court declared abortion a constitutional right — only bans abortion after fetal viability and includes an exception for saving a mother’s life or health.

While there’s no legal consensus on whether the 1849 law is still in effect, the threat of prosecution under the law led Planned Parenthood of Wisconsin to halt abortions in the state after the Supreme Court tossed out the protections guaranteed under Roe.

“We will never stop fighting to ensure every Wisconsinite has the right to consult their family, their faith and their doctor and make the reproductive health care decision that is right for them,” Democratic Gov. Tony Evers, who authorized the lawsuit, said at a Milwaukee press conference Tuesday.

“Abortion isn’t health care and for the governor and attorney general to try and use the courts to enact law is just as wrong as the original Roe v. Wade decision over 50 years ago,” Vos said in a statement. “I’m confident our courts will see through their tactics and uphold the law.” 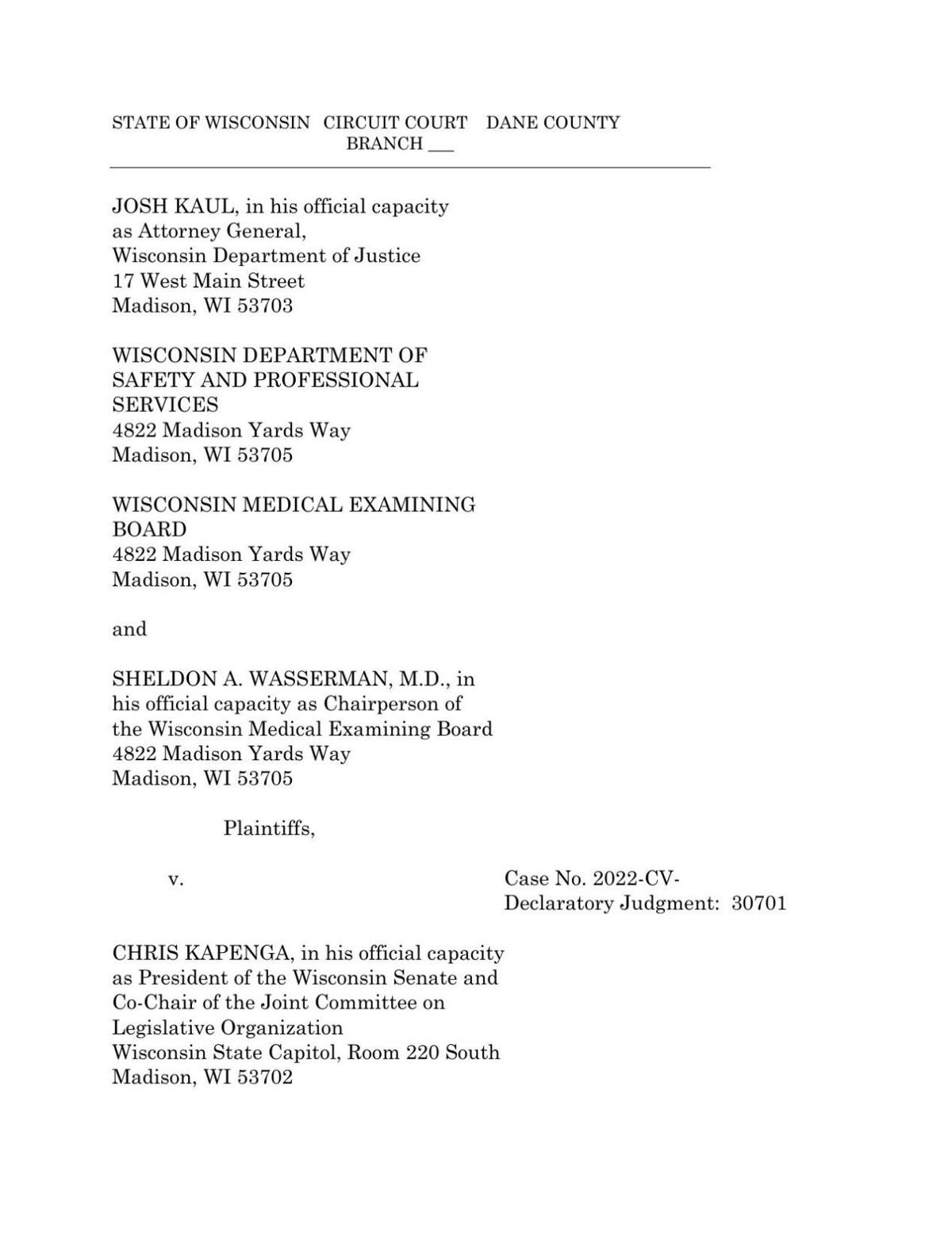 A spokesperson for LeMahieu said he was out of the office and would try to comment on the lawsuit Wednesday. Kapenga did not immediately respond to a request for comment.

Heather Weininger, executive director of the anti-abortion group Wisconsin Right to Life, stated, “We are disappointed, but not surprised to see that our top elected officials refuse to do their jobs and enforce the laws on our books.”

She added that her group would work with the Legislature to fight the lawsuit.

UW-Madison law professor David Schwartz said the case is “very likely” to end up before the Wisconsin Supreme Court, where Kaul would have a “reasonable chance of success.”

(1)  Any person, other than the mother, who intentionally destroys the life of an unborn child is guilty of a Class H felony.

(2) Any person, other than the mother, who does either of the following is guilty of a Class E felony:

(a) Intentionally destroys the life of an unborn quick child; or

(b) Causes the death of the mother by an act done with intent to destroy the life of an unborn child. It is unnecessary to prove that the fetus was alive when the act so causing the mother's death was committed.

(5) This section does not apply to a therapeutic abortion which:

(a) Is performed by a physician; and

(b) Is necessary, or is advised by 2 other physicians as necessary, to save the life of the mother; and

(c) Unless an emergency prevents, is performed in a licensed maternity hospital.

(6) In this section “unborn child" means a human being from the time of conception until it is born alive.

The Wisconsin Supreme Court has a 4-3 conservative majority. Its occasional swing voter, Justice Brian Hagedorn, once wrote Planned Parenthood was “a wicked organization more committed to killing babies than to helping women” and said Roe should be overturned. The court could have a liberal majority next year with an election to replace retiring conservative Justice Patience Roggensack.

But Kaul and Evers on Tuesday defended filing the lawsuit while the state’s highest court retains a conservative majority. Evers said he didn’t want to wait to challenge the law with abortion rights in flux, and Kaul said he thinks the law is on their side in this case. Kaul also noted he has won significant cases at the state high court despite its conservative makeup.

The legal uncertainty and disruption in Wisconsin and other states in the wake of Friday’s decision should have kept the U.S. Supreme Court from making such a ruling, Schwartz said.

“One of the factors that the court is supposed to consider in whether to uphold or overrule a precedent is the disruption and confusion that might result from it,” Schwartz said. “And they didn’t give sufficient weight to that element, to that factor.”

Kaul has already said he wouldn’t divert state Justice Department resources to prosecute people under the law, but his Republican challengers almost certainly would.

On Tuesday, Kaul said the 1849 law uses outdated terminology and leaves doctors and others uncertain of what the law provides for.

“That law cannot fairly be said, after 50 years of being invalid, to represent the will of the people of the state of Wisconsin,” Kaul said.

(1)  In this section, “viability" means that stage of fetal development when, in the medical judgment of the attending physician based on the particular facts of the case before him or her, there is a reasonable likelihood of sustained survival of the fetus outside the womb, with or without artificial support.

(2) Whoever intentionally performs an abortion after the fetus or unborn child reaches viability, as determined by reasonable medical judgment of the woman's attending physician, is guilty of a Class I felony.

(3) Subsection (2) does not apply if the abortion is necessary to preserve the life or health of the woman, as determined by reasonable medical judgment of the woman's attending physician.

(4) Any abortion performed under sub. (3) after viability of the fetus or unborn child, as determined by reasonable medical judgment of the woman's attending physician, shall be performed in a hospital on an inpatient basis.

(5) Whoever intentionally performs an abortion and who is not a physician is guilty of a Class I felony.

(6) Any physician who intentionally performs an abortion under sub. (3) shall use that method of abortion which, of those he or she knows to be available, is in his or her medical judgment most likely to preserve the life and health of the fetus or unborn child. Nothing in this subsection requires a physician performing an abortion to employ a method of abortion which, in his or her medical judgment based on the particular facts of the case before him or her, would increase the risk to the woman. Any physician violating this subsection is guilty of a Class I felony.

Two days before the nation’s highest court overturned Roe, the Republican-led Legislature rejected Evers’ call to repeal the state’s near-complete ban. Evers then announced on Saturday that he would offer clemency to anybody charged and convicted under the law.

Milwaukee District Attorney John Chisholm on Friday signed a letter pledging not to prosecute people who provide or support abortions, while Dane County District Attorney Ismael Ozanne said he would use his discretion “to prosecute only those crimes that keep our community safe and represent our collective values.”

“If the voters want a district attorney who prosecutes women for seeking an abortion or licensed providers who are acting in the best interest of their patients, they will need to elect someone else,” said Ozanne, who will be up for reelection in 2024.

At the same time, anti-abortion groups have made clear their intention to shore up Wisconsin’s near-complete abortion ban and see it enforced.

Read complete coverage of the U.S. Supreme Court decision that ends nationwide abortion protections, and what it means in Wisconsin.

The decision is a stunning reversal of a guarantee that permitted medical providers to administer thousands of abortions in Wisconsin each year for decades.

In response to Friday's ruling, a group of doctors plans to start an independent clinic in the Rockford area to initially offer pill abortions and eventually provide surgical abortions.

Here's what Wisconsin legislators and advocates on both sides of the abortion issue had to say about the U.S. Supreme Court ruling overturning…

Some anti-abortion rights groups, like Pro-Life Wisconsin, want to alter a provision in the state's near-complete abortion ban that allows abortions for when it's necessary to save the mother's life.

Phil Hands: The battle for abortion rights in editorial cartoons

Take a look back at some of Phil Hands' favorite editorial cartoons about the fight for abortion rights.

Gov. Tony Evers: "I will do everything in my power" to protect abortion rights

Evers said he "will do everything in his power" to fight the ruling, including pardoning individuals charged under Wisconsin's nearly complete…

Kahli Harvey: 'How many more ways can my country tell me I'm not a full person?'

Elisabeth Lentz: Pregnancy 'would put my life at risk'

'It's not over': With signs and guns, hundreds rally in Downtown Madison to protest end of Roe

The ruling has set off a travel scramble across the country, with a growing number of states mostly banning the procedure. Some clinics are moving as agencies facilitate travel to other states.

His newfound clarity on the issue comes after the U.S. Supreme Court overturned Roe v. Wade on Friday, which drew the conversation about the nation's highest court increasingly into focus.

Democrats, Republicans look to competitive suburbs for thin margins they need to win

Few places across the state are becoming as evenly split politically while registering as high of a turnout as the suburbs.

What abortions are still allowed in Wisconsin? 'To save the life of the mother' is up for debate

Wisconsin's 1849 law banning abortion allows an exception to save the life of the mother. But some doctors say it's not clear which conditions fall under that definition. "How sick is sick enough?" one doctor asked.

A 10-year-old girl impregnated by her stepfather was seen this year at the Safe Harbor Child Advocacy Center in Madison, the center's director said. 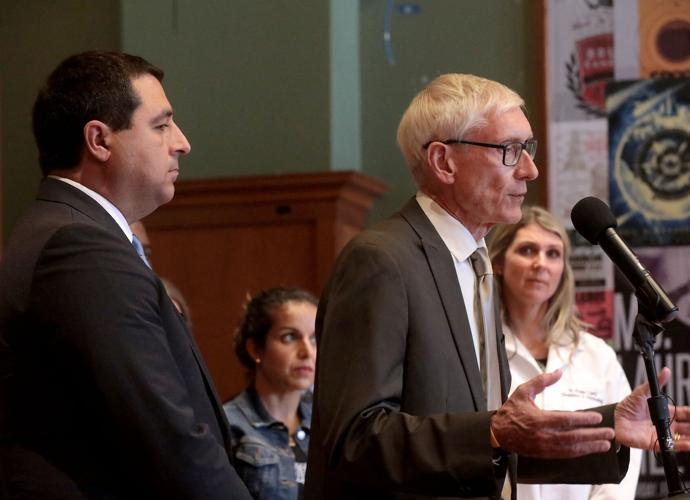 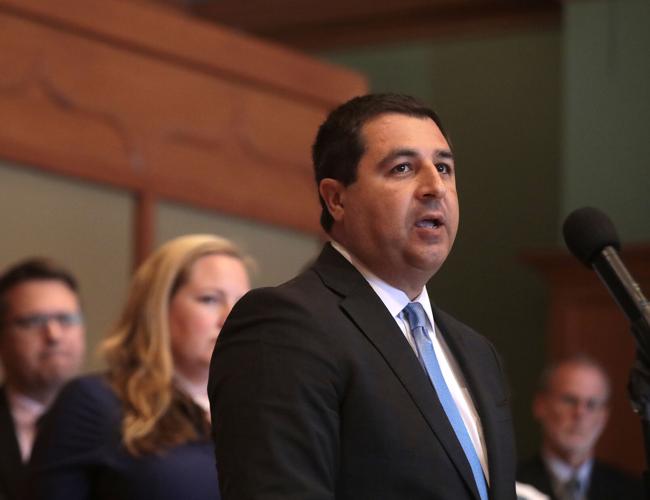