The U.S. Supreme Court on Wednesday rejected Wisconsin’s 10-year legislative maps drawn by Gov. Tony Evers and sent the matter back to the state’s high court, which had adopted the Democratic governor’s amended proposal.

The rejection of Evers’ Assembly and Senate district maps by the nation’s highest court puts the issue back in the hands of the Wisconsin Supreme Court and will further delay the state’s redistricting process, which state election officials say needs to be resolved in order to prepare for the August primary and November election.

“We agree that the court committed legal error in its application of decisions of this Court regarding the relationship between the constitutional guarantee of equal protection and the VRA,” the justices wrote.

Evers issued a statement Wednesday that the maps he drew comply with federal and state laws, including the equal protection clause and the Voting Rights Act, as well as the state Supreme Court’s previous ruling that new maps must include minimal changes to existing boundaries.

“If we have to go back to the Wisconsin Supreme Court — who have already declared our maps ‘superior to every other proposal’ — to demonstrate again that these maps are better and fairer than the maps we have now, then that’s exactly what we’ll do,” Evers said.

The order stipulates that the state Supreme Court is free to take additional evidence if it prefers to reconsider Evers’ maps, but “any new analysis, however, must comply with our equal protection jurisprudence.” The majority also notes that the state’s high court has “sufficient time to adopt maps” before the Aug. 9 primary.

Sotomayor and Kagan described the decision as “unprecedented.”

“This Court’s intervention today is not only extraordinary but also unnecessary,” the justices wrote.

The Legislature in its March 7 request for appellate review focused on Evers’ decision to add a seventh majority-Black Assembly district in Milwaukee, which would dilute the Black majority in the six existing districts. The Legislature argued the state high court never decided whether the seventh district was required by the Voting Rights Act. 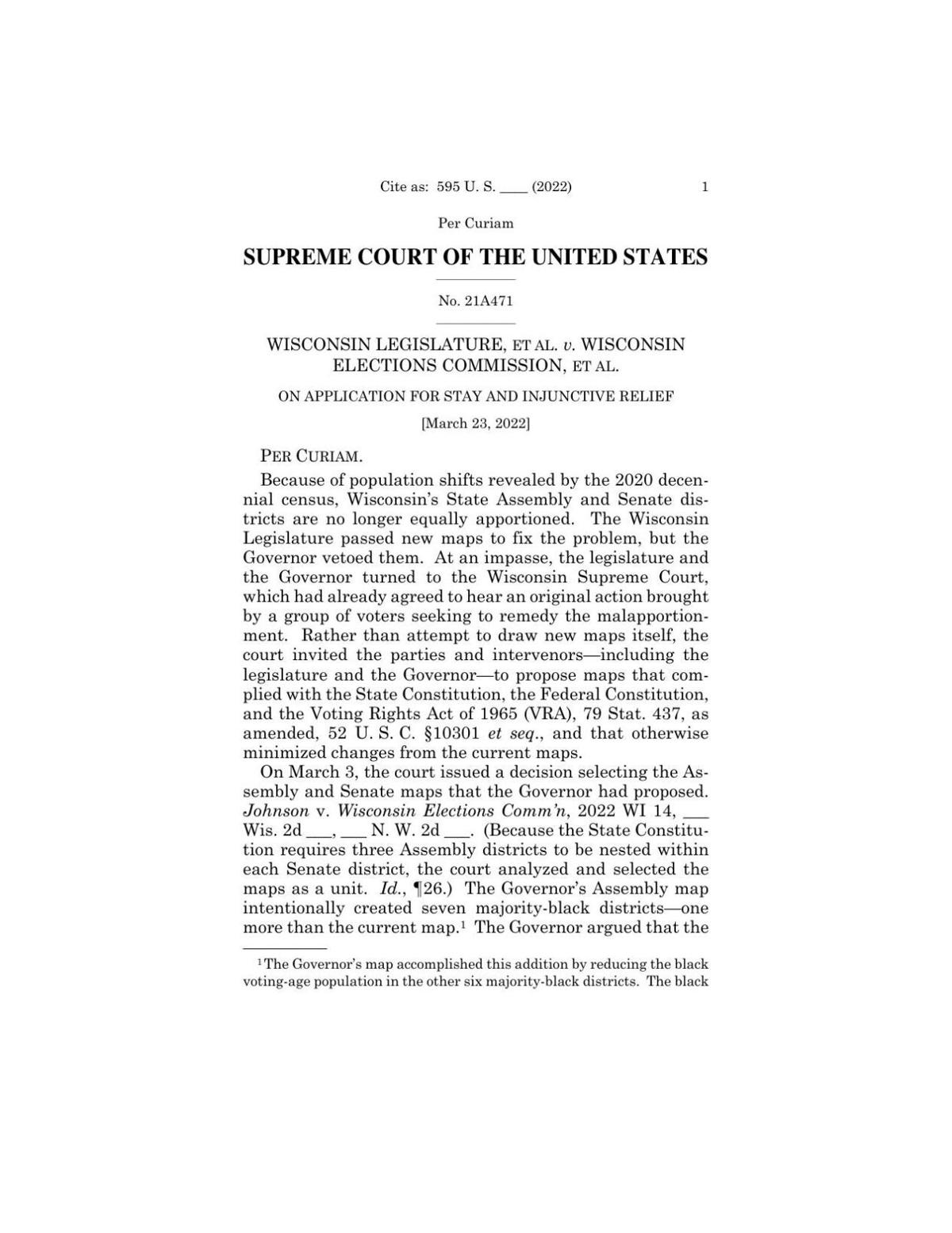 The lawmakers claimed Evers used the federal Voting Rights Act as “a shield for open and obvious violations” of the Constitution.

State Sen. Lena Taylor, D-Milwaukee, also filed a legal challenge to the state Supreme Court’s adoption of Evers’ maps. Taylor, whose district sees its majority drop from 58.4% to 50.62% under Evers’ boundaries, said the way Evers added a seventh majority-Black Assembly district ultimately waters down the Black vote in all of the districts.

The U.S. Supreme Court ruled that the state court did not properly consider “whether a race-neutral alternative that did not add a seventh majority-black district would deny black voters equal political opportunity.”

Rick Esenberg, president and general counsel for the conservative law firm Wisconsin Institute for Law and Liberty, said in a statement the U.S. Supreme Court’s decision “is a critical victory to ensure that our government not make decisions on the basis of race.”

“Although the (Voting Rights Act) aims to ensure fair representational opportunities for communities of color, the court has been cautioning mapmakers to avoid overreliance on race when drawing district lines,” he said.

With the state Supreme Court now tasked with drafting legislative maps “not inconsistent” with the U.S. Supreme Court’s order, the Wisconsin Elections Commission is sure to face additional delays in implementing new maps for upcoming elections.

From the beginning of the court battle over the state’s 10-year maps, the commission said in a filing, it had asked the state Supreme Court to put a new redistricting plan in place by March 1.

To properly administer the next election, the commission told the U.S. Supreme Court it needs maps by April 15 in order to record the maps’ new boundaries in the statewide voter registration system, integrate the new data with voters’ information and manually review local ward map changes to make sure each voter was in the correct district.

On March 11, the commission told the federal high court that any delay in implementing new maps beyond March 15 would “increase the risk of errors in (the statewide voter registration system) and decrease the time available to correct those errors before circulation of nomination papers begins.”

“This is going to create some real complications for our election process, and I think what we’re going to see is a flurry of court action coming out of this regarding what the next maps will look like,” Democratic Attorney General Josh Kaul said in a WisPolitics.com online luncheon Wednesday.

“Never has it been clearer that the U.S. Supreme Court majority will do anything it can to advance Republican interests, rather than the law, the Constitution, and the will of the people,” Chheda said.

The order from the nation’s highest court is the latest development in the battle over the state’s next decennial maps that began when Evers vetoed GOP-drawn boundaries in mid-November. The governor had championed boundaries drawn by the People’s Maps Commission, but those maps failed to get universal support among legislative Democrats, with some criticizing the boundaries for potentially diminishing Black and Hispanic representation in the Legislature.

Evers ultimately submitted new maps to the court, which reduce but maintain Republican majorities in the Legislature while likely preventing them from claiming a veto-proof supermajority. Those maps were drawn after the state Supreme Court in November ruled it would follow a “least change” approach from the current maps, which are considered some of the most gerrymandered in the nation.

The state’s high court issued a 4-3 ruling earlier this month in favor of Evers’ maps.

An analysis of Evers’ congressional maps by PlanScore, a program that predicts precinct-level votes for districts based on past election results and U.S. Census data led by the Campaign Legal Center, a national nonprofit organization that advocates for nonpartisan maps, found that the governor’s maps maintain two Democratic-leaning U.S. House districts — Districts 2 and 4, which are held by Reps. Mark Pocan, D-Black Earth, and Gwen Moore, D-Milwaukee.

The already competitive 3rd Congressional District, currently held by departing Rep. Ron Kind, D-La Crosse, would lean Republican under the new maps. With the district up for grabs, the Wisconsin Democratic Party is set to hold its first in-person convention since 2019 in La Crosse in June.

In an interview with WKBT, Wisconsin Democratic Party Chair Ben Wikler noted the competitive nature of the 3rd Congressional District and said, “This is an area where, as Democrats, we need to earn every vote.”

The Legislature must redraw political lines every decade based on the latest population figures from the U.S. Census Bureau. In 2011, Republicans, working in secretive conditions, drew maps that packed Democratic voters into lopsided districts and spread out rural and suburban Republicans into districts with solid, but narrower, majorities. The maps allowed the GOP to hold more than 60% of legislative seats, even when Democrats won all statewide elections in 2018.

Yablon said the state Supreme Court will likely ask the litigants to weigh in on how to proceed. Going forward, Yablon said, the justices could choose another map besides Evers’ that the court received, ask for amended maps redrawing the Milwaukee-area Assembly districts at issue, conduct additional factfinding to decide whether Evers’ map is necessary under the Voting Rights Act or explain that it’s sticking with Evers’ map for race-neutral reasons.

The maps would maintain Republican majorities in the Legislature but likely prevent them from claiming a veto-proof supermajority.

Evers also asked the court to consider making a change to his map to reduce the number of Black-majority Assembly districts from seven to six.

"You had the authority in late November," attorney James Bopp said before the Assembly elections committee. "If you felt that the election was so corrupt ... You could have intervened."

The informational hearing came as the state Supreme Court decides whether to ban absentee ballot drop boxes and the gathering and submitting of others' absentee ballots by a third party.

The leader of the state veterans policy board is refusing to step down as he fights child pornography charges, creating another appointment headache for Gov. Tony Evers.

For two decades, Republicans have placed their nominating convention in swing states — North Carolina, Ohio and Florida — and that could favor Milwaukee over Nashville for the 2024 convention.

Facing criticism, Wisconsin GOP may consider 'no endorsement' option at May convention

Gubernatorial candidate Kevin Nicholson and a growing number of county parties have called for ending the endorsement process entirely.

Dane County Judge Valerie Bailey-Rihn said "there's nothing further at this point that makes sense to investigate," with regard to Assembly Speaker Robin Vos' private accounts.

Republicans could hold six of Wisconsin's eight House seats next year under the state's new district maps, but Democrats could capitalize in future years on a surprising change.

The court issued a 4-3 ruling, with Justice Brian Hagedorn joining fellow conservatives on the court, in favor of maps drawn by legislative Republicans.

In June 2019, the Supreme Court decided that it has no role in restraining partisan gerrymandering, resulting in many legislatures being more partisan than the state's population as a whole.