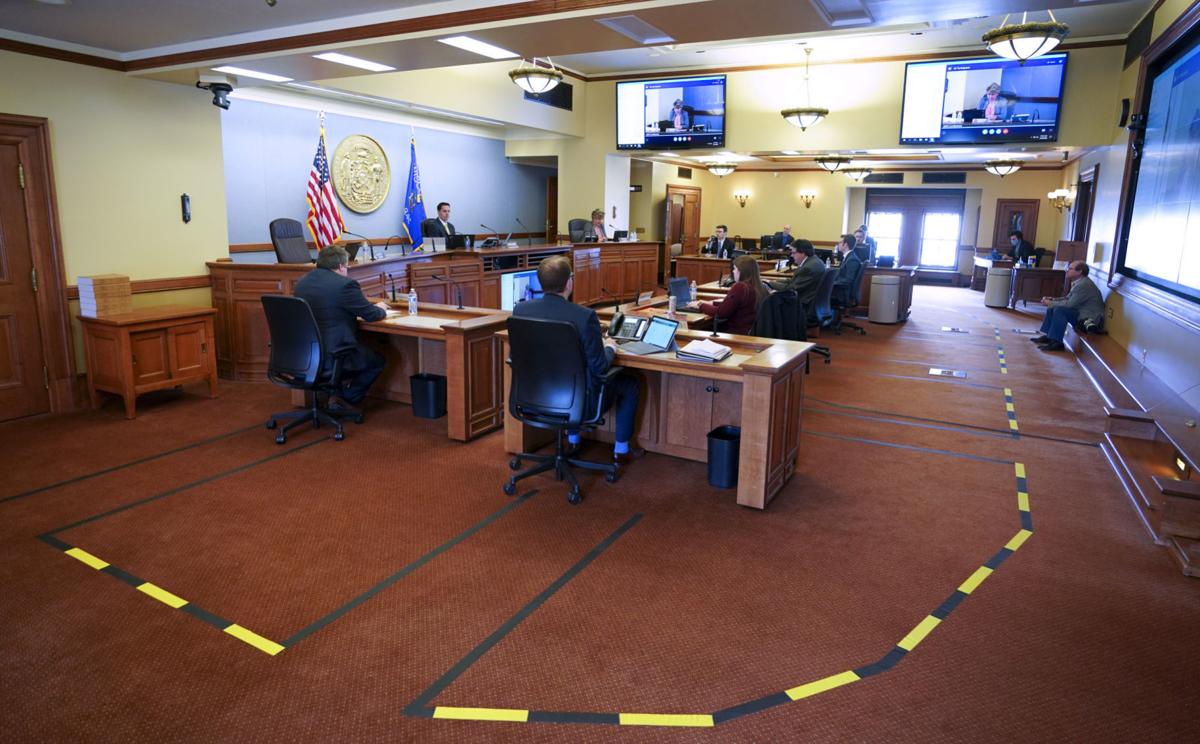 The state Senate conducts a virtual session Wednesday to take up legislation in response to the COVID-19 pandemic. Most participants dialed in, but a few senators and staff physically attended the meeting, held in a hearing room where tape on the floor indicated where people should walk to stay clear of others. 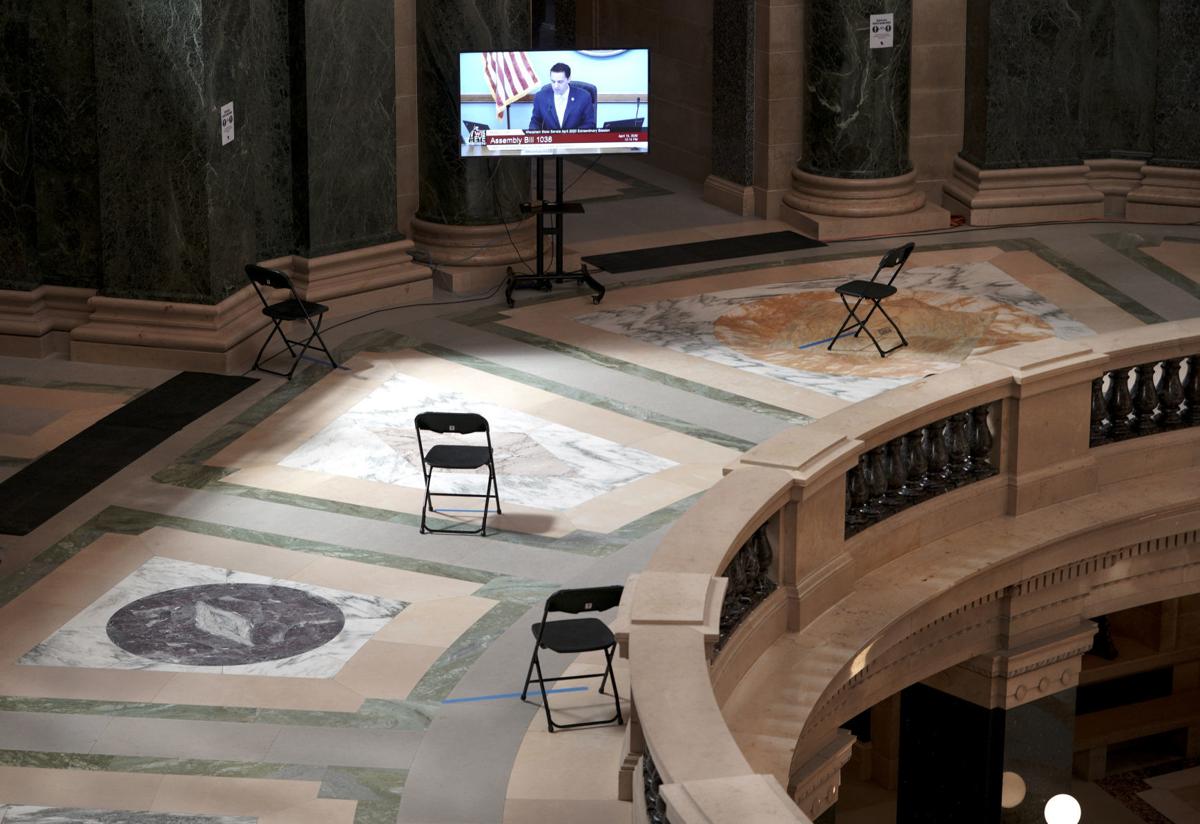 Chairs set up in the Capitol rotunda for watching the Senate session over a TV monitor were spaced far apart for safety's sake. They remained empty during Wednesday's proceedings. 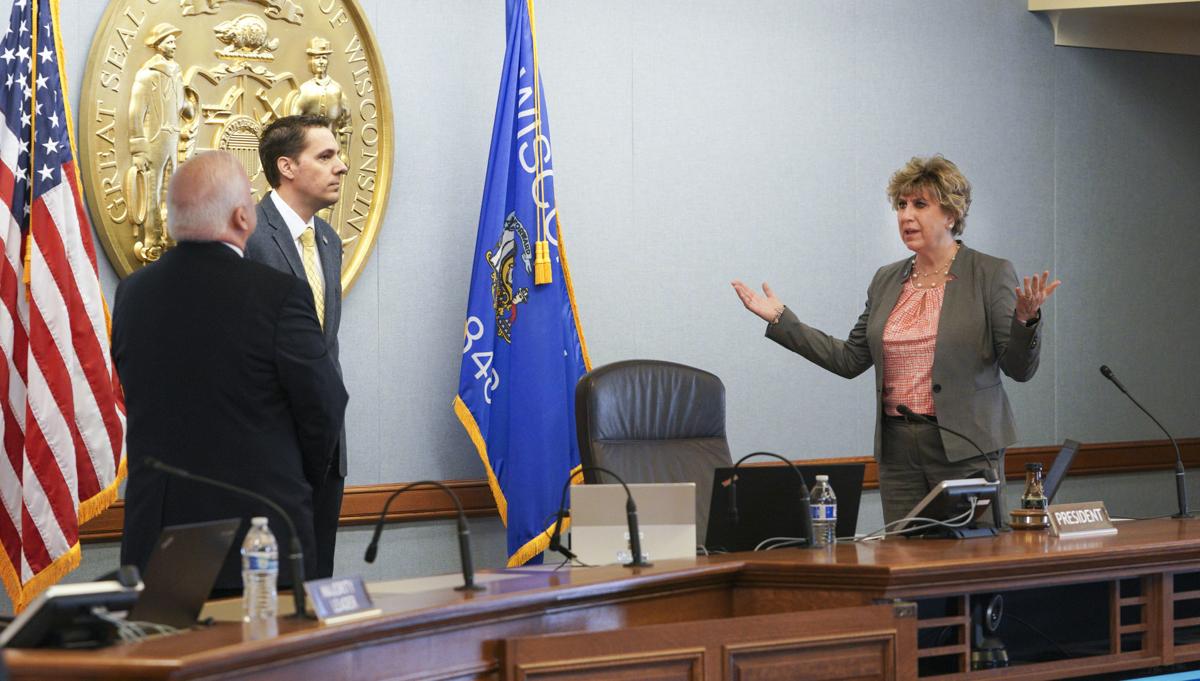 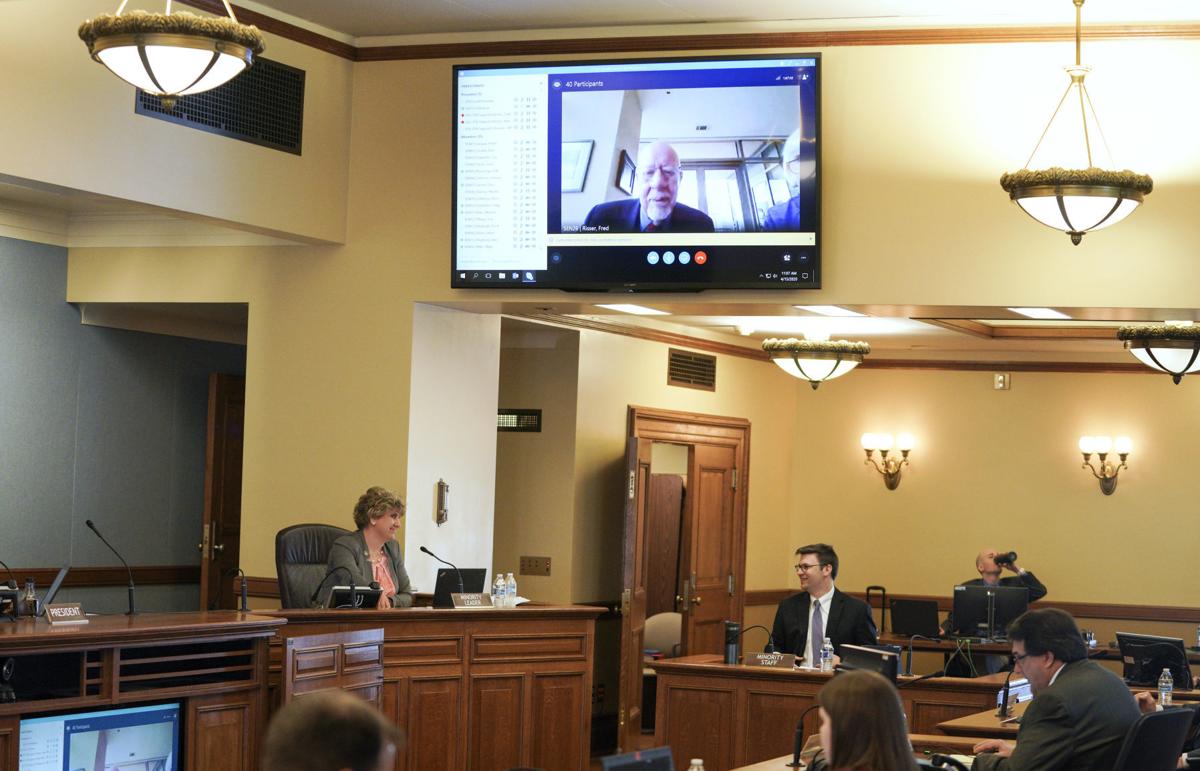 State Sen. Fred Risser, D-Madison, appears via teleconference during Wednesday's virtual session of the Senate to take up legislation in response to the COVID-19 pandemic.

Gov. Tony Evers signed legislation Wednesday aimed at ensuring the state will receive roughly $2 billion in federal aid to respond to the COVID-19 pandemic — the bill reaching his desk more than a month after the governor declared a public health emergency in response to the virus.

Almost all lawmakers attended the Senate’s extraordinary session on Wednesday remotely from home or their Capitol offices in an attempt to maintain social distancing recommendations meant to reduce transmission of the respiratory disease that has killed 182 people in the state and sickened more than 3,700. The physical meeting, which was attended by some legislators and staffers sitting far from one another, was held in a hearing room on the fourth floor set up with large video displays.

The bill, which was deemed “imperfect” by lawmakers on both sides of the aisle, passed the Senate unanimously, with Milwaukee Democrat Lena Taylor not voting. Evers signed the bill hours later.

“Although I remain concerned about what is missing from this legislation I have called for this bill to be sent over for my signature as soon as possible,” Evers said in a statement. “The bill I will sign falls short of what is needed to address the magnitude and gravity of what our state is facing, but I am not willing to delay our state’s response to this crisis.”

The legislation aims to complement the more than $2 billion in federal aid that Wisconsin expects to receive. It also allows the state to claim roughly $300 million in additional federal Medicaid funding in the final half of the 2019-20 fiscal year, as well as increased unemployment benefits from the federal government.

While lawmakers on both sides of the aisle have applauded the package as a good first step, Democratic members, as well as public safety and health officials, have criticized the bill for not allocating more state funding.

“While this bill will pass today with bipartisan support, it is far from perfect,” Senate Minority Leader Jennifer Shilling, D-La Crosse, said Wednesday. “Today is not the end, this is just the beginning.”

On Tuesday, the legislative package passed the Assembly 97-2, with Milwaukee Democrats Jonathan Brostoff and Marisabel Carbrera opposed, arguing the legislation doesn’t do enough.

Jim Palmer, executive director of the Wisconsin Professional Police Association, on Tuesday tweeted, “THANKS FOR NOTHING,” saying the package provides “ZERO RELIEF to first responders and other critical workers risking their health during this pandemic.”

“Not much help for first responders,” Mahlon Mitchell, president of the Professional Fire Fighters of Wisconsin, tweeted Tuesday. “Actually Zero.”

Chris Anderson, president of the Professional Ambulance Association of Wisconsin, said Wednesday that emergency medical services groups want the state to use the federal stimulus money to boost Medicaid payments for EMS by $7.5 million a year.

“We are in trouble, and we need help,” said Anderson, saying EMS costs have increased at least $35 per call during the COVID-19 pandemic because of the need for protective equipment and decontamination supplies. “There’s help available from the federal government.”

EMS services weren’t included with hospitals, nursing homes and other providers in state lists of who should get the federal money, but they should be, Anderson said. Medicaid rates for EMS haven’t gone up since 2008 and are only at 42% of federal Medicare payments, he said.

“We take care of everyone that needs our help,” Anderson said. “We’re doing that in the face of a pandemic.”

Efforts by Democratic members to amend the bill to provide more money for businesses and health care providers, while also adjusting state election rules to require ballots be mailed to every registered voter and remove state voter ID rules, were tabled by the GOP majority. Republicans in the Senate did not comment on the proposed amendments.

“This bill is imperfect and it might be the first bill of a number that we are going to have to pass in the Legislature, but it is timely and I think it’s been well thought out,” Senate Majority Leader Scott Fitzgerald, R-Juneau, said Wednesday. “We aim to reopen the economy as soon as possible and get back to the normal lives we all were very used to living.”

Lawmakers have not indicated if and when they plan to convene again to take up future legislation.

The legislative package signed Wednesday waives the one-week waiting period for unemployment benefits until February 2021. Other provisions in the package include increasing the state’s ability to borrow and prohibiting insurance providers from discriminating against COVID-19 patients.

In addition, the bill allows the state budget committee to spend up to $75 million during the public health emergency on coronavirus-related needs. It also directs the Wisconsin Economic Development Corp. to provide Evers and legislative leaders with a plan to support major industries in the state that have been adversely affected by the outbreak, including tourism, manufacturing, agriculture, construction and retail.

An earlier draft of proposed GOP legislation included language to further weaken the governor’s authority by giving the state’s GOP-led budget committee the ability to cut spending on schools, health care and employee pay, among other things. That language was later removed.

The legislative package will waive the one-week waiting period for unemployment benefits until February 2021.

It’s unclear where that help will come from after the Small Business Administration announced Thursday that all of the $349 billion authorized by Congress last month is spoken for, and the agency is no longer accepting applications.

All mail-in voting happens in other states, but Wisconsin Republicans aren't interested amid COVID-19 pandemic

Despite problems with in-person and absentee voting during the COVID-19 pandemic, there's little indication lawmakers will seek an overhaul of the voting system.

Bewley was selected by Senate Democrats Friday in a virtual election. In addition, Sen. Janis Ringhand, D-Evansville, was elected as the new Assistant Democratic Leader.

The state Senate conducts a virtual session Wednesday to take up legislation in response to the COVID-19 pandemic. Most participants dialed in, but a few senators and staff physically attended the meeting, held in a hearing room where tape on the floor indicated where people should walk to stay clear of others.

Chairs set up in the Capitol rotunda for watching the Senate session over a TV monitor were spaced far apart for safety's sake. They remained empty during Wednesday's proceedings.

State Sen. Fred Risser, D-Madison, appears via teleconference during Wednesday's virtual session of the Senate to take up legislation in response to the COVID-19 pandemic.