In the final State of the State address of his first term, Democratic Gov. Tony Evers called on lawmakers to take up his plan to spend a portion of Wisconsin’s projected surplus on schools, caregivers and $150 checks for every resident in the state — a proposal Republicans plan to reject.

Evers, who is seeking a second term this November, also touted the billions of dollars of federal stimulus funds he has allocated over the course of the pandemic to businesses and farmers. Adding to that, he announced on Tuesday plans to spend $25 million of those funds to freeze tuition at University of Wisconsin System for two years and another $5 million to expand counseling and provide mental health programs for members of the Wisconsin National Guard.

Evers plans to sign an executive order Wednesday calling for a special session, which Republicans who control the Legislature have previously disregarded. Lawmakers are required to gavel in to a special session called by the governor, but they do not have to hold debate and can immediately adjourn.

“Indifference in this building is getting expensive, folks. And let me be frank: The people who will bear the burden of inaction are almost certainly not the people sitting in this chamber tonight,” Evers said in a packed Assembly chamber with Democrats masked and Republicans unmasked. “So don’t sit here in a white, marble building with state coffers that are full and tell Wisconsinites who are working hard every day that we can’t afford to do more. That’s baloney.”

In addition to sending $150 checks to every Wisconsinite, Evers’ proposal would also allocate more than $130 million in child care and caregiver tax credits and $750 million to schools.

Republicans have criticized Evers’ proposal as a reelection gimmick and have said they plan to use the state’s $3.8 billion projected surplus on tax cuts in the next budget process. Evers opposed election-year tax rebates when proposed by former Republican Gov. Scott Walker during his unsuccessful 2018 reelection bid.

Senate Majority Leader Devin LeMahieu, R-Oostburg, said the Senate will gavel in and immediately adjourn Evers’ special session, as Republicans have done in the past.

Other proposals announced by Evers don’t require GOP approval, like plans to allocate $30 million for emergency medical service providers in the state and $15 million for mental health services in schools using federal funds.

“This pandemic didn’t just expose the need for us to expand access to rural health care,” Evers said. “It also highlighted that our kids need more mental health support in our schools, and this pandemic only made those needs more urgent.”

He also unveiled plans to create a Blue Ribbon Commission on Veteran Opportunity to create additional supports for education and employment for the more than 300,000 veterans in the state.

“Tonight’s address highlighted the fact that Governor Evers listens to the people of Wisconsin,” Assembly Minority Leader Greta Neubauer, D-Racine, said in a statement. “His investments in military personnel and veterans services, student mental health, and rural healthcare services show he is truly listening to the people of our state.”

Steineke agreed that some of the priorities touched on by Evers are important, but added “the real difference between us is how much we can afford to spend?”

Evers’ speech comes as he seeks a second term this November with a campaign focused on the “kitchen table issues” that helped him unseat Walker in 2018. Republicans, who hold majorities in the Assembly and Senate and have clashed with Evers since before he took office, view the Nov. 8 general election as an opportunity to unseat the governor and reclaim full control of state government.

The Democratic governor has touted the accomplishments of his first three years, including increased spending on roads, broadband expansion and education. He also signed the state’s 2021-23 biennial budget last summer, which included more than $2 billion in GOP-authored income tax cuts. The budget also funds two-thirds of the cost of public schools, though it achieves that by largely cutting property taxes.

“Over the course of the past three years, Gov. Evers has never truly led on a single topic,” Vos said. “What we saw again tonight was the exact same empty rhetoric and campaign promises that are nothing more than focused on his 2022 reelection and not on what the real needs of Wisconsin are. … We need to figure out how to deal with inflation in the long term, not $150 one-time checks.”

Republicans also criticized Evers for not mentioning crime in the state, a topic that GOP lawmakers have focused in on leading up to the 2022 election.

“The soft-on-crime bail policies plaguing our state have put car thefts and murders in Milwaukee on pace to break records,” LeMahieu said. “Gov. Evers refuses to act while people around the state suffer. That is not the strong leadership Wisconsin needs.”

A growing list of Republicans have lined up to challenge Evers this November, including former Lt. Gov. Rebecca Kleefisch and anti-establishment candidates Rep. Timothy Ramthun and Marine veteran Kevin Nicholson. Small-business owner and entrepreneur Jonathan Wichmann is also seeking the party nomination in the Aug. 9 primary.

Last year, Evers became the first governor in 74 years to not be physically present in the Capitol to deliver his address, which he delivered in a video message. Legislative Republicans viewed Evers’ address at the Capitol that year, with Vos delivering the GOP response from the Assembly dais where the governor usually speaks, another break from tradition.

Evers dedicated last year’s speech to the 5,000 Wisconsin residents who had died from the COVID-19 pandemic, a number that has since more than doubled. In his speech Evers lamented how “things don’t always go the way we planned.”

“If we’d had our way, 11,637 Wisconsinites would still be here with us today — they’d be at our dinner tables, they’d be in our classrooms, our hospitals, our churches, our farms, and our factories, and they’d still be here celebrating more birthdays, more holidays and more milestones with us,” Evers said.

Republicans have keyed in on the state’s ongoing workforce challenges this year, with Vos and Senate President Chris Kapenga, R-Delafield, describing the labor shortage as “one of the biggest struggles across our state” in a State of the State invitation letter sent to Evers late last year.

A survey of 265 employers late last month by Wisconsin Manufacturers and Commerce, the state’s largest business organization, found that 88% of respondents reported difficulty hiring enough employees, with the large majority of those business owners looking to wage increases to attract talent.

Asked why they are having trouble hiring employees, 44% of respondents said it was because of a lack of qualified applicants, 36% blamed the labor shortage and 9% said it was due to overly generous unemployment benefits.

Meanwhile, Republicans who control the Legislature plan to vote in the Assembly this Thursday on a package of workforce-related bills that would, among other measures, tie the number of weekly unemployment benefits an individual could receive to the state’s overall unemployment rate. At the current rate, unemployed individuals would only be eligible for 14 weeks of benefits, which top out at $370 per week.

Other bills in the package would prohibit individuals who turn down job offers from receiving Medicaid coverage and require the state Department of Health Services to enforce a federal work requirement for able-bodied adults without dependents in order to take part in the state’s FoodShare program, which helps people with limited money buy food.

Evers' proposal stands in stark contrast to Republican leaders' plan to hold on to the projected funds until the next budget process, which be…

Under the bill, data collectors and processors would be subject to $7,500 fines for violating Wisconsin consumers' demands regarding how their…

The package of bills also need to clear the Senate, but appear likely to be vetoed by Democratic Gov. Tony Evers, who has pushed for increased…

'They were given a one-sided story': The Republican battle for Wisconsin's urban vote

Democrats have had a monopoly on Wisconsin's urban vote for two decades. Republicans are trying to change course, or at least mitigate their losses.

While Wisconsin’s rainy day fund has reached the highest level in state history, the account, which is reserved to be used in times of financi…

Disagreements have already arisen over what to do with the excess dollars. 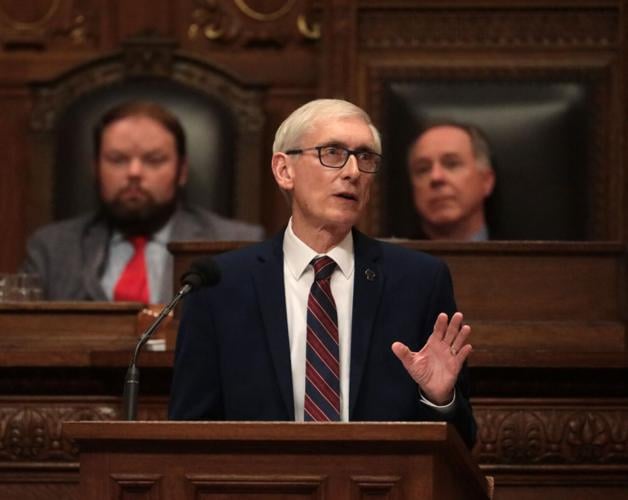 Gov. Tony Evers delivers the State of the State address at the state Capitol on Tuesday, calling on lawmakers to use part of the state's $3.8 billion surplus on $150 checks for every resident. 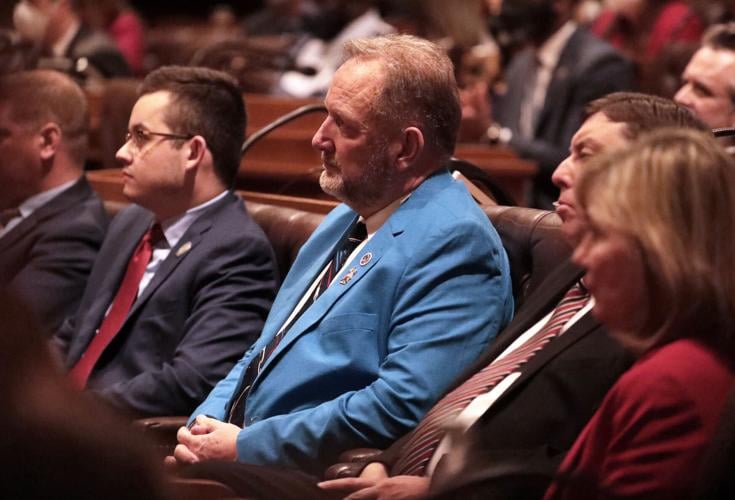 Republican members of the Wisconsin Legislature, including Rep. Timothy Ranthum, R-Campbellsport, center, who is seeking to oust Gov. Tony Evers in the fall election, listen to the State of the State address. 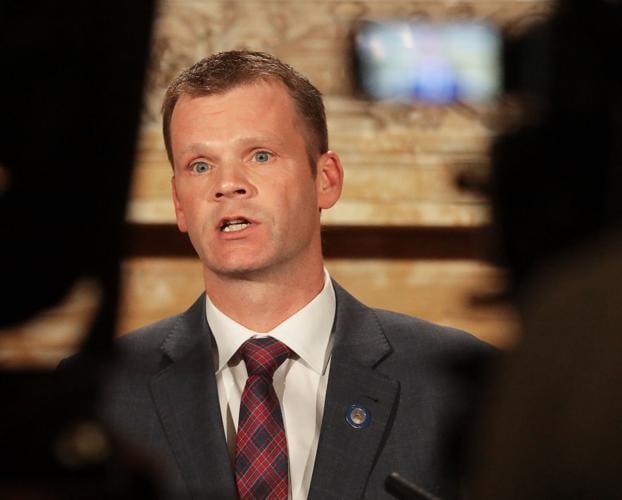 Senate Majority Leader Devin LeMahieu, R-Oostburg, said in the Republican Party’s response to Gov. Tony Evers’ State of the State address that the Legislature won't take up his proposals in a special session.