Campaigning for a potential third term, U.S. Sen. Ron Johnson has risen from a political outsider to a Republican stalwart whose record largely reflects the party’s ebbs and flows during the past decade.

At the same time, the Oshkosh Republican has also become known for his off-the-cuff remarks, his occasional holdout on Republican bills and his embrace of conspiratorial ideas that occasionally hit the mark.

His political career began amid the 2010 tea party wave as he channeled fury at the Affordable Care Act into a win over longtime incumbent Democratic Sen. Russ Feingold. But after winning his second term as the tea party morphed into the Trump party, Johnson has taken the lead in courting the party’s fringe elements in promoting ineffective COVID treatments and baseless claims of election fraud.

Johnson has consistently voted against spending bills he considers wasteful, while championing tax cuts that have largely benefited the wealthy and business owners like himself.

Headed into a third campaign season, Johnson still views Washington as dysfunctional, and he concedes that his time in office hasn’t been especially productive.

But after saying late in the 2016 campaign that he wouldn’t seek a third term if elected, Johnson says he is breaking that promise because he thinks the country, at the hands of Democratic control of Congress and the presidency, “is in too much peril.”

In 2010, Johnson was a manufacturer with no political experience. He hadn’t considered entering the Senate race, he later said, until the Senate passed the Affordable Care Act, also known as Obamacare, on Christmas Eve in 2009.

The Wisconsin Republican Party endorsed him a week after he got into the race late in May 2010. Other candidates dropped out and backed him. Conservative former talk radio host Charlie Sykes even read a 20-minute Johnson stump speech live on the air, which Johnson credited with helping him win the seat.

Democratic U.S. Senate candidates want more rural votes. Can they get them?

Johnson vowed to shrink the government and tackle the national debt as a political outsider with no deep ties to the practices and people he disavowed. He embraced supporters from the tea party movement while steering clear of the now-defunct Tea Party Caucus.

Among his first actions as senator was co-sponsoring a measure to repeal the Affordable Care Act. At the time, he wrote in a statement, “I truly do believe that the passing of Obamacare is the single greatest assault on our freedom in my lifetime.”

Setting up a trend that would wedge Johnson against Democrats and sometimes Republicans, Johnson early on in his first term also voted against the budget agreement covering federal spending for part of fiscal 2011 because he didn’t think the measure went far enough to cut spending.

'They were given a one-sided story': The Republican battle for Wisconsin's urban vote

Still, Johnson remained relatively unknown to voters. A Marquette Law School Poll in March 2014 found 44% of voters didn’t have a positive or negative opinion of him. Of those who were familiar with Johnson, slightly more had favorable views of him. The Washington Post even called him the most vulnerable senator on the map in November 2014, two years before his second reelection.

Before former President Donald Trump became the clear Republican frontrunner, Johnson didn’t endorse him or his more controversial views. He told WTMJ radio he was “praying” for leaders who wouldn’t be divisive. Without naming Trump, Johnson also said he was demoralized by the state of the presidential race.

By May 2016, as Trump became the presumptive nominee, Johnson said he would back him but still admitted he didn’t agree with him on everything. Among other policy disagreements, Johnson stood against Trump’s call to ban all Muslims from traveling to the U.S. He also wouldn’t comment on Trump’s embrace of Russian President Vladimir Putin.

But as Trump took hold of the Republican Party and Johnson began his second term, Johnson rose to national prominence for his close proximity to Trump and for his tangled involvement in Russia-Ukraine relations as Trump faced impeachment because of his dealings with Ukraine.

Johnson was also one of the most vocal politicians affirming the authenticity and questioning the contents of the laptop belonging to Hunter Biden, President Joe Biden’s son. He first raised the issue well over a year before The Washington Post and New York Times confirmed the contents’ authenticity. Johnson is asserting the laptop’s contents prove the existence of dubious relationships the president and his family have with foreign actors.

In his second term, Johnson introduced and saw the swift passage of the Right to Try Act, which allows terminally ill patients to use experimental medication not fully approved by the Food and Drug Administration. As Senate Homeland Security and Governmental Affairs Committee chair, Johnson saw about 300 bipartisan bills pass through his committee, 132 of which became law, according to Johnson spokesperson Alexa Henning.

After the 2020 election, he used his position as chair to question the results, even though courts had already rejected the former president’s objections to it.

Ahead of the Jan. 6, 2021, certification of the results, Johnson initially intended to “reject the electors from disputed states.” He changed his mind at the last minute and voted to certify those states as thousands of Trump supporters stormed the Capitol.

Since then, he has became one of the most vocal — and perhaps the most powerful — Wisconsin politician to voice opposition to Wisconsin’s current elections system.

He has called for the Wisconsin Legislature to take over administering elections from the Wisconsin Elections Commission, a stand unpopular among Republican legislative leaders. He has also rallied behind conservative former Supreme Court Justice Michael Gableman’s GOP-ordered probe into the 2020 election despite despite numerous flaws in Gableman’s report.

“Ron Johnson is the biggest embarrassment to come out of Wisconsin since Joe McCarthy,” Democratic Senate candidate Tom Nelson said.

Also like Trump, Johnson during the pandemic has championed what he calls “second opinions,” pushing alternative treatments to COVID-19 such as ivermectin, which a recent study debunked, and encouraging people to use mouthwash to protect themselves from the virus while casting doubt on the efficacy of vaccines.

“He was poised to be very much his own man,” said Sykes, who has fallen out of favor with Republicans for opposing Trump. “Instead, he became Trump’s.”

Not all Republicans see it that way.

Scholz said Johnson has always been independent from other politicians’ influence.

“I don’t think he changed for Trump,” he said. “There’s things that Donald Trump says and does that Ron Johnson has adopted as well, but I don’t think he has done that as a sellout.”

Henning said Johnson usually agreed with Trump but hasn’t hesitated to speak out when he didn’t. In fact, nothing much has changed him, she said.

“Other than becoming more aware of the dysfunction and corruption in Washington, D.C., he hasn’t changed at all,” she said.

A FiveThirtyEight project, “Tracking Congress in the Age of Trump,” found Johnson voted against the former president’s position more often than most Republican senators. His key breaks from Trump often related to government spending.

“He votes against these massive deficit spending bills because they are mortgaging our children’s future and there is no time to review or amend them,” Henning said. “They are presented as take it or leave it, and he generally decides to reject them by voting no.”

Johnson also initially opposed Trump’s signature tax plan, which could have stalled the measure in the Senate. But he changed his mind when he negotiated into the measure a tax provision that kept some of the wealthiest Americans from paying billions in taxes.

Johnson says the tax break benefited small business owners, which it did. But a study by Treasury Department economists found that the wealthiest 0.1% reaped the bulk of the tax savings the provision created. While Henning said the provision is one of Johnson’s greatest accomplishments, its passage provided fodder for his Democratic opponents.

“The only thing Ron Johnson has to show from more than a decade in Washington is a tax bill that delivered millions in tax breaks for millionaires like him while selling out middle class families and working people here at home,” Lt. Gov. Mandela Barnes, one of several Democrats seeking to oust Johnson, said in a statement.

Running for a potential third term despite his pledge not to seek one late in the 2016 campaign, Johnson has risen in the Republican ranks. He makes regular Fox News appearances; his virtual town halls yield him questions from people of all stripes; his in-person events around the state tend to pack rooms.

“It’s clear that 12 years in Washington has changed Ron Johnson — and not in a good way,” said U.S. Senate candidate and state Treasurer Sarah Godlewski.

The topics he has focused on especially as he campaigns are inflation, private school vouchers, COVID-19, government spending and what he deems destructive Democratic governance. He slams Biden’s many moves and judicial nominees as inflation skyrockets and the president’s ratings fall.

It’s unclear whether that campaigning is working for him.

The latest Marquette poll shows increasing odds for him to beat. While 33% of registered voters have a favorable view of Johnson, 45% view him unfavorably, the highest in any Marquette poll during his time in office.

Johnson has defied past polls and political forecasts, but the high unfavorable figure is new territory.

Democrats called the measure "half-baked," saying the legislation doesn't go far enough to legalize a drug that most Wisconsinites want to see…

In the state Senate, only one of Wisconsin's many anti-LGBTQ bills got a floor vote this past year. Some of the other ones didn't get a hearing.

The only woman running for U.S. Senate in Wisconsin hoped to separate herself from her Democratic challengers on Thursday by being the first o…

Wisconsin Republicans are exploring a push to shift election oversight, including certification of results, from a bipartisan election commiss…

Ron Johnson says overturning Roe v. Wade might be 'messy' but won't be 'that big a change' 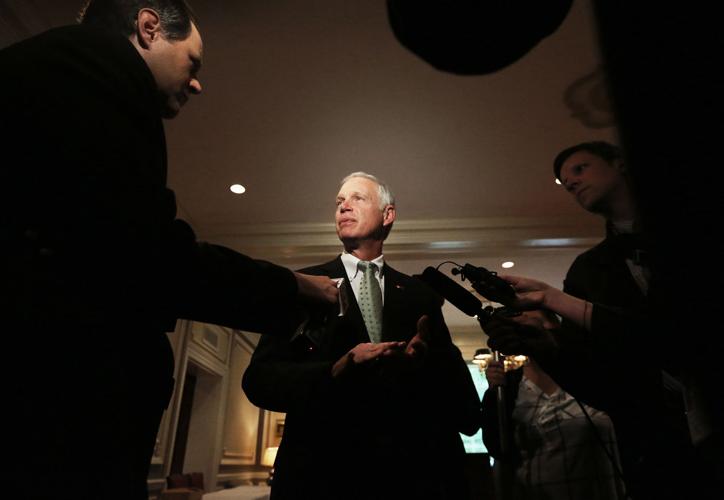 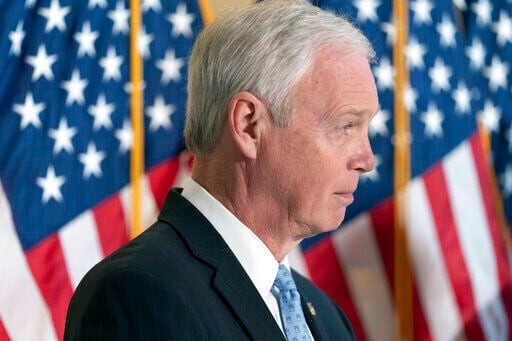