The more than $1.1 million taxpayer-funded, GOP-ordered review of the 2020 election appears to be on its last legs, but the wheels began coming off five months ago when lead investigator Michael Gableman recommended the Legislature take the legally impossible step of decertifying the results.

Assembly Speaker Robin Vos, who hired Gableman last year to lead the probe, in an interview with the Wisconsin State Journal on Thursday said that recommendation in a March interim report soured his opinion of the former state Supreme Court justice.

“I think there’s a pretty broad consensus that the tack that we were on needs to come to a natural conclusion, so we need to figure that out,” Vos told the State Journal.

Vos, R-Rochester, said he offered Gableman clear parameters to follow before the investigation officially launched in July 2021: The review needed to be nonpartisan and Gableman should avoid both the limelight and political events.

“I think for most of calendar year 2021, Justice Gableman did a good job,” Vos said.

The review was initially intended to conclude by the end of last year, but Gableman himself admitted in June — while providing testimony in one of four public records lawsuits related to the probe — that he spent the first several months of his efforts getting up to speed on Wisconsin elections.

In August, he attended a South Dakota event hosted by MyPillow CEO and election denier Mike Lindell billed as presenting “irrefutable” proof that Chinese-backed hackers helped steal the 2020 election for President Joe Biden. Gableman later said he was “very disappointed with the lack of substance to back up those claims.” He also traveled to Arizona that month to observe the widely discredited election audit conducted by Cyber Ninjas.

“He couldn’t help himself and in the end he was going to rallies, he was attending political events which clearly looked like there was a partisan tinge to the investigation,” Vos said. “We stopped most of that, but then here we are where he does not just attend a political event but chooses to be involved in a very partisan way and then lie about it.”

Vos’ comments are in reference to what may be the final nail in the coffin for Gableman’s review — his direct involvement in backing Vos’ primary opponent. Despite being the longest-serving Assembly speaker in Wisconsin history and one of the most influential Republicans in the state, Vos on Tuesday narrowly avoided a primary loss to election denier Adam Steen, who came into the race with juggernaut endorsements from both Gableman and Trump.

Here's why the 2020 election will never be 'decertified'

There is no provision under the law or the Constitution by which the government can wipe out millions of citizens' votes.

While Vos launched the review at Trump’s behest, the former president’s opinion of Vos has soured over recent weeks due to the speaker’s refusal to entertain Trump’s calls to decertify the results of the 2020 presidential election — something that cannot happen under state law or the U.S. Constitution.

Vos ultimately won by about 260 votes, according to unofficial results, but not before Gableman recorded a robocall days before the primary claiming that the man who hired him a year ago “never wanted a real investigation.”

“I never said we weren’t serious about the investigation,” Vos said Thursday. “Frankly, if you ask any Democrat and most Republicans in the state, they think I was pretty serious in spending the money and time and resources that we did. So for him to lie about it, that’s kind of an unforgivable situation where you trust somebody because of their integrity and then at the end they lie.”

Vos said he plans to meet with Assembly Republicans next Tuesday to decide the fate of the review, but didn’t offer specifics on next steps.

Gableman did not respond to a request for comment Thursday.

Vos hired Gableman at a cost of $676,000, though legal fees and other court costs have pushed the price tag to more than $1.1 million — all of which will ultimately fall on taxpayers. Gableman was paid $11,000 per month for the first 10 months of the review, but Vos earlier this year paused the probe to allow time for pending lawsuits related to the review to play out in court and halved Gableman’s monthly salary to $5,500.

Gableman’s salary cut came two months after he released an interim report of his review on March 1 in which he told state lawmakers they should “take a very hard look” at decertifying the results of the 2020 presidential election. Just two weeks later, on March 16, the former justice wrote in a private memo to Vos that decertification was a “practical impossibility.”

“For whatever reason he felt the need to put in that interim report ... that we could decertify, or at least that we should explore it,” Vos said. “Well, that’s unconstitutional and impossible. At that point, he kind of lost my confidence.”

Sen. Melissa Agard, D-Madison, like many state Democratic lawmakers, has long criticized Gableman’s review and said Gableman’s partisan views should have come as a surprise to no one, including Vos. Gableman attended a pro-Trump rally in November 2020, months before he was hired by Vos, and said a stolen election would be “systematically unjust.”

“This is a monster that is continuing to grow more and more heads because of the way that Speaker Vos is choosing to spend the taxpayers’ dollars,” Agard said. “Now that he has been on the receiving end of that toxicity, he wants to make that change? We’ve been waving white flags and trying to draw his attention to that from the very beginning because this is who Gableman is.”

Sen. Kathleen Bernier, chair of the Senate elections committee and one of the few state Republicans to openly criticize Gableman’s review, said “I can only speak on the Senate and I think most of us regretted it,” when asked about the probe.

Much of the negative comments directed at Vos, including by Trump and state Rep. Timothy Ramthun, who has repeatedly called for decertifying the 2020 election’s results, have focused on the belief that Vos was holding back Gableman’s efforts.

“Did Robin want to let him loose on all kinds of harebrained ideas? No, he probably didn’t,” Bernier said. “Did he hold him back from following some Ramthun conspiracy theories? Probably. But the fact of the matter is, that was a mistake, even hiring (Gableman). I mean, he is less than credible, in my opinion.”

While Bernier has long spoken about moving beyond the 2020 presidential election and the resultant election review, she also called for passing new election laws, which Republicans tried to do this past legislative session before Democratic Gov. Tony Evers vetoed them.

A recount, court decisions and multiple reviews have affirmed that Biden defeated Trump in Wisconsin by almost 21,000 votes. A report from the nonpartisan Legislative Audit Bureau last year found no evidence of widespread fraud in the 2020 election but made several recommendations for improvements.

Vos offered a similar sentiment, noting that he’s convinced that practices followed in the 2020 election “were clearly done wrong,” but added that “we don’t have a silver bullet to say this would have resulted in 20,000 ballots being different, we don’t know that.

“We have to have it be that when an election is conducted, 99% of the people accept the result. Under the system we have right now, that’s not true,” Vos added. “Somehow, we have to be better and that was my goal with the investigation, to show, yes there were problems, but in the end we have to move on and showcase how to fix it, not how to overturn it. I don’t know how we get there.”

Agard, who along with a handful of Democratic lawmakers on Wednesday sent a letter to the Republican chair of the Legislature’s Joint Legislative Audit Committee seeking a full audit of Gableman’s review, said Vos holds some of the blame for the skepticism some Republicans still have over Wisconsin’s 2020 election.

“When you peddle conspiracy theories and feed lies to the people of Wisconsin and then you say you want to put that to bed, that’s like saying to the arsonist, ‘Here, you can take the hose, you can put the fire out and guess what, we’re going to give you a gold star for extinguishing that fire,’” Agard said.

In prayer as tallies show Vos is defeating Steen

Steen and his wife say they plan to pray, then consider future

Watch now: 'We are at a crossroads in our country and our state' | A moment of prayer at Adam Steen results watch party

Coverage of Michael Gableman and the 2020 elections investigation

Read past coverage about Michael Gableman and the GOP-ordered investigation into the 2020 election.

"Trump owns (Tim Michels), he is connected to Trump," Gov. Tony Evers said. "That’s his problem, that’s not mine."

Running on the myth that the 2020 election can be "decertified" proved to be a losing issue for many pro-Trump candidates.

Tim Michels has been endorsed by the former president, while Rebecca Kleefisch is the preferred candidate of the former vice president.

One emerging alternative to the Elections Commission is the Secretary of State's Office, but both top Republicans and Democrats have opposed that idea, making it unclear whether such a move would happen anytime soon.

"We’ll never get to the end of the question because you’re expecting more than what this individual and the organization was prepared — and able — to deliver," Dane County Circuit Court Judge Frank Remington said.

Remington also ruled that the office had met the conditions necessary to remove Remington's previous contempt order, but ordered the office to pay $24,000 in penalties for the 12 days it took the office to satisfy the purge conditions.

The lawsuit was filed last year following Gableman's request that the Waukesha County sheriff compel the mayors of Madison and Green Bay to meet with him or else face jail time. 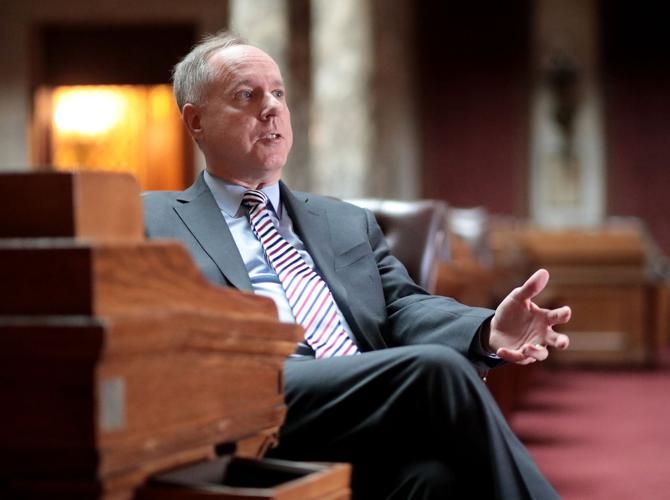 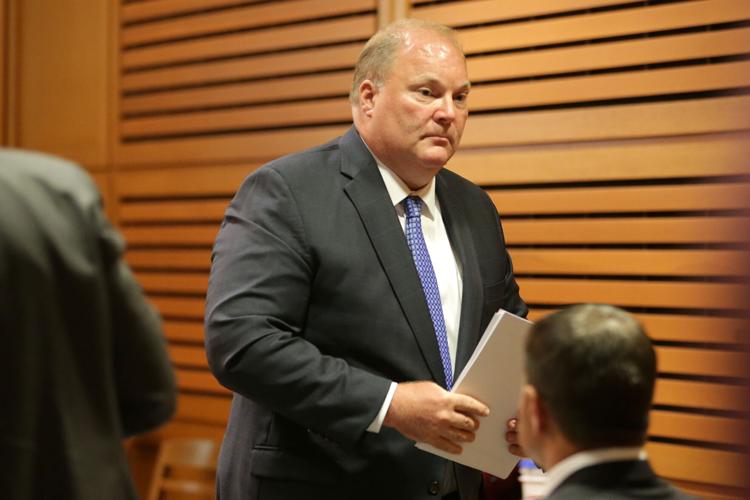