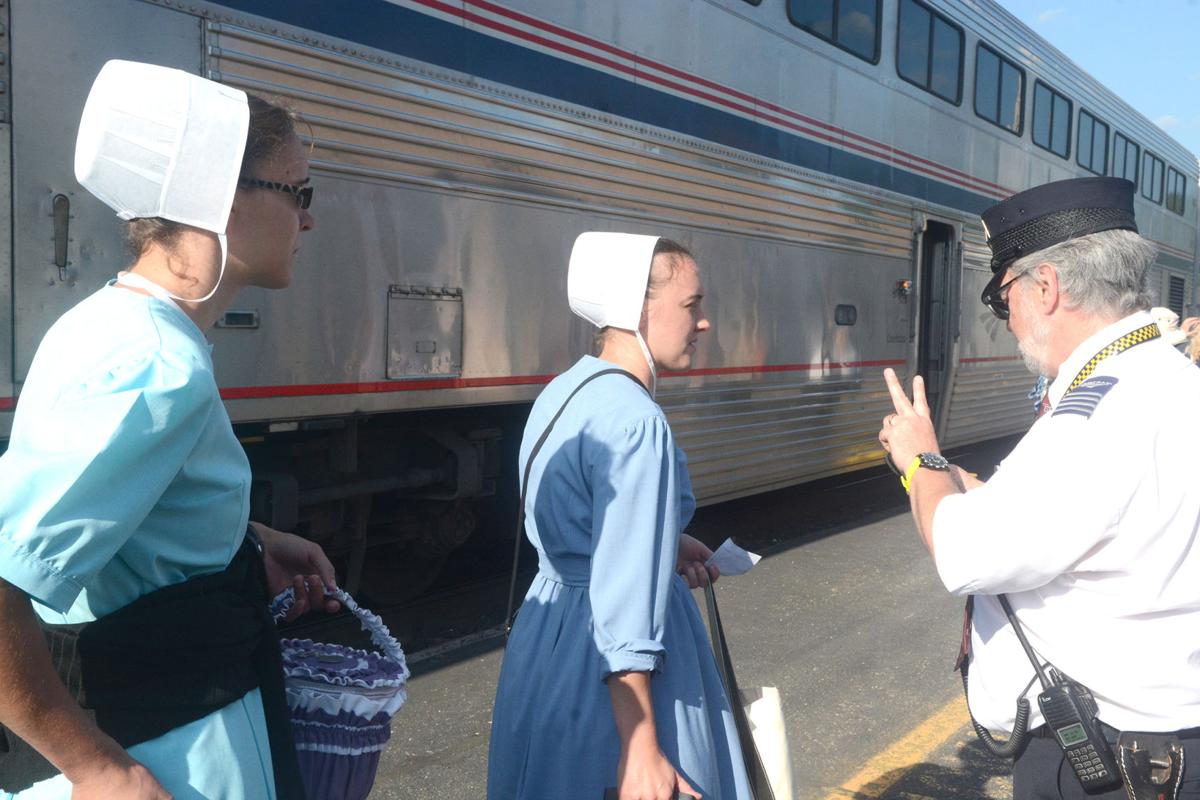 Amtrak conductor John Mier checks tickets for Mary Miller, left, and her sister Naomi Miller as they prepare to board the Empire Builder at Amtrak's Portage station in July 2017. 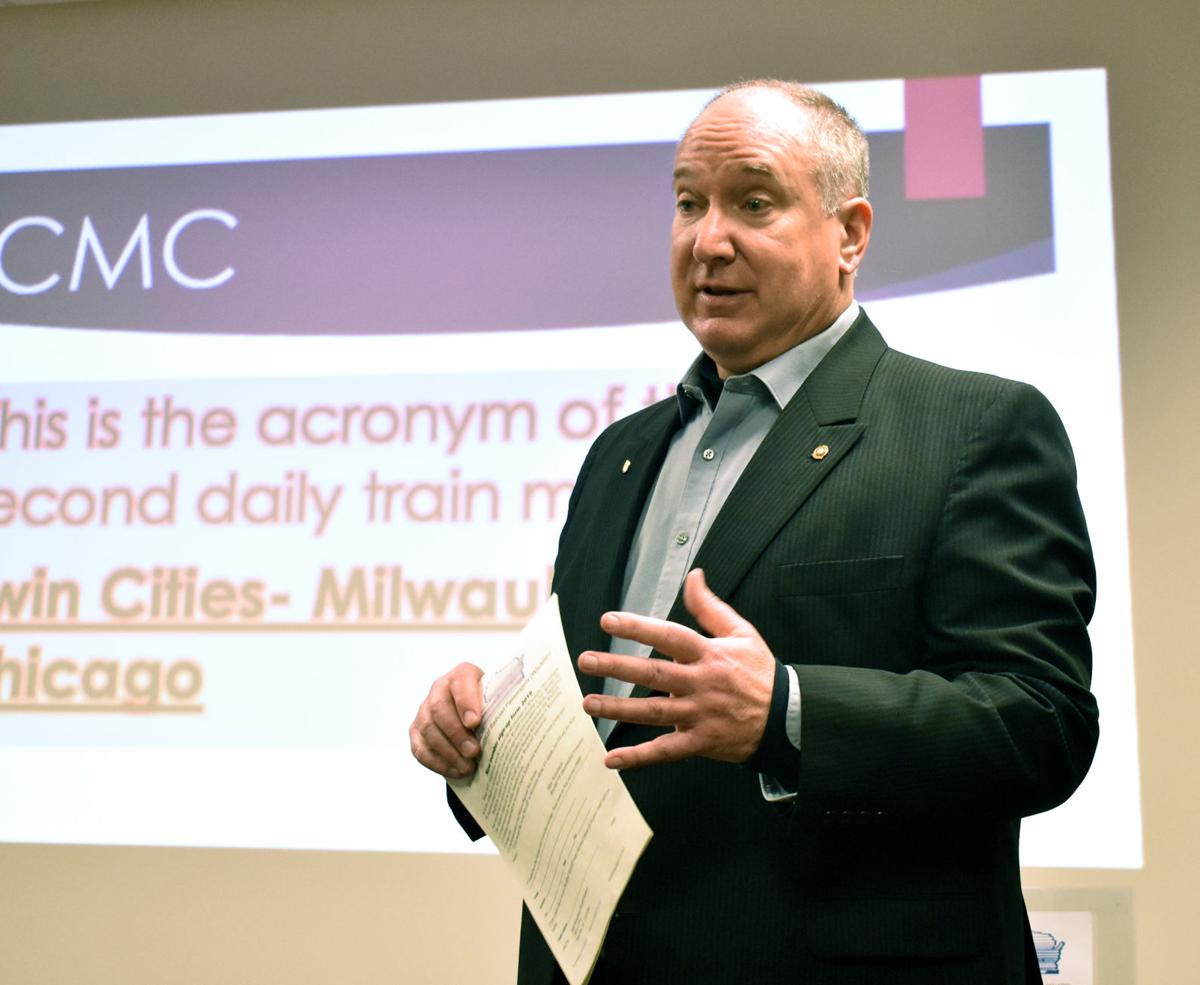 Terry Brown of the Wisconsin Association of Railroad Passengers speaks during a town hall meeting Feb. 14 at the Portage Enterprise Center.

Those hoping for a second daily Amtrak train traveling across Wisconsin got good news from Arun Rao, the passenger rail manager for the Wisconsin Department of Transportation.

The Federal Railroad Administration recently told the DOT the proposed “TCMC” train should qualify for a “categorical exclusion” — a cheaper and less exhaustive way for Wisconsin and Minnesota to study the train’s potential impact on the environment, Rao said.

The TCMC, discussed and studied by Wisconsin, Minnesota and Amtrak since 2013, would travel 410 miles from the Twin Cities to Milwaukee and Chicago and carry passengers in both directions once per day.

Qualifying for the abbreviated environmental study would eliminate Wisconsin’s and Minnesota’s need to complete a full-blown environmental assessment for the TCMC, Rao said.

“The reason why this project should fit that mold is because the work is on an existing railroad,” Rao said of the documentation that reviews, for example, the TCMC’s potential impact on wildlife — documentation he believes should be completed as early as 2020.

Portage Director of Business Development and Planning Steve Sobiek, who also spoke at the meeting, said the news from Rao makes him feel optimistic about the chances that TCMC could launch within a few years.

“I just think there’s a new attitude in addressing transportation and being more supportive of this train,” said Sobiek, who supports TCMC because it offers more reliable travel schedules than Amtrak’s Empire Builder line and is expected to increase the number of new visitors to Portage.

The eastbound Empire Builder experiences delays on a regular basis, Rao and Sobiek said, since it travels all the way from Seattle.

Rao said 2022 could be the year TCMC launches. Service development planning — including studies concerning ridership, equipment, revenue and more — is somewhere between 25 and 50 percent completed, he estimated. The planning is fully funded in Wisconsin and expected to be fully funded soon in Minnesota, Rao said.

Finishing that work along with the environmental work in 2020 would set up Wisconsin and Minnesota to apply for federal matching grants to accomplish final design, construction and implementation of service, Rao said.

The construction and implementation of TCMC is currently estimated at $76 million, Rao said. Federal grants should cover about 70 to 80 percent of the total cost, he added. It is not yet known how much money the states and Amtrak would need to pay from that amount, but Rao estimated Wisconsin’s contribution at roughly $10 million.

Wisconsin Gov. Tony Evers’ proposed budget sets aside $45 million for passenger rail and prioritizes improvements to Amtrak’s Hiawatha line between Milwaukee and Chicago. If TCMC does not get the money it needs for TCMC’s final design from the state budget this summer, the timeline for launching TCMC could be delayed by a couple years, Rao said.

Because the proposed route for TCMC is less than 750 miles, its annual operating costs would be shouldered by the states and not Amtrak.

Ongoing operating costs for TCMC are estimated at $5.5 million and would be split among Wisconsin and Minnesota and possibly Illinois, Rao said.

“And the goal would be for that number to go down as the ridership and revenue matures,” Rao said of operating costs.

Amtrak estimates 155,000 riders would use TCMC in the first year, including 11,000 users in Portage.

Empire Builder currently gets about 100,000 passengers traveling on routes between Chicago and St. Paul per year.

More than 7,000 travelers boarded or got off Amtrak’s Empire Builder at the Portage depot in 2018, down 20 percent from the year before.

U.S. Reps. Gwen Moore and Ilhan Omar are calling on the secretary of defense to investigate "possible mistreatment and/or neglect" faced by Afghan refugees in Wisconsin.

Amtrak conductor John Mier checks tickets for Mary Miller, left, and her sister Naomi Miller as they prepare to board the Empire Builder at Amtrak's Portage station in July 2017.

Terry Brown of the Wisconsin Association of Railroad Passengers speaks during a town hall meeting Feb. 14 at the Portage Enterprise Center.