Homeowners in many Dane County communities are seeing only modest increases in their property tax bills this month, while some have even seen their taxes go down, thanks largely to an unprecedented infusion of federal aid, a healthy lottery credit and continued state-imposed limits on local government levies.

Overall, “it’s one of the smaller increases in recent years,” said Jason Stein, research director for the nonpartisan Wisconsin Policy Forum. “But it’s going to depend on what’s happening in the local community, whether or not the school district had a referendum.”

Perhaps the most obvious trend is that lottery credits — revenue from lottery sales used to offset property taxes — are reducing property taxes for owners of their primary residence much more than last year, Dane County treasurer Adam Gallagher said.

Overall, the lottery credit is delivering $343.6 million to state homeowners for property taxes levied this year and payable in 2022, compared with $237 million last year, according to the state Department of Revenue. Statewide, the credit on tax bills is an average $229, a 38% increase from 2021.

“The lottery credit this year is the highest amount ever certified for distribution in the lottery’s 33-year history,” DOR Secretary Peter Barca said.

Those sums reflect tax bills after the school tax credit is applied but before deducting the state lottery credit, which rose 57% to $303 this year for the average-value $335,200 home in Madison, and another credit for building improvements. The city’s $40 vehicle registration fee, also known as a wheel tax, now in its third year, does not appear on property tax bills.

Overall, the city is collecting $259 million more in taxes this year, a 1.2% increase over the current year.

As usual, individual bills will vary, driven by changes in values and local factors such as referendums or growth in the tax base, officials stressed. Some municipalities also add charges, such as for trash collection or recycling, improvements to streets or sidewalks, or unpaid bills.

For years, Madison’s growth has enabled the city to modestly increase property taxes while remaining under state levy limits.

New construction increased a steady $509 million, down from the $622 million last year, $606.3 million in 2019, $604 million in 2018, and a record $750 million four years ago. New construction is vital because tight state revenue limits restrict how much the city can increase tax collections to the amount generated by net growth, which is the value of new buildings, additions and remodeling minus the value of demolished properties.

The drop in new construction, partially a result of not having either materials or personnel to build early in the pandemic, allowed an estimated levy increase of just 1.5%, or about $2.4 million, for operating purposes in the 2022 budget.

As usual, the cost of education greatly affects property tax bills this year.

At the state level, aid increased while there was no increase in revenue limits, which “put a very big downward pressure on school property taxes,” Stein said.

Statewide, new bills show gross property taxes for the state’s K-12 schools rising just 0.3%, from $5.38 billion to $5.4 billion, the smallest percentage increase in district levies since 2015, policy forum research shows. Of 421 districts, 212 will increase levies, 200 will decrease them and nine will keep them the same.

In Dane County, eight of 22 school districts wholly or partly in the county had passed recent spending referendums, and 12 increased their tax levies, ranging from a 0.8% bump in Cambridge to a 9.7% increase in Lodi. Levy decreases ranged from 0.2% in Middleton-Cross Plains to a 17.9% drop in Marshall, according to the policy forum.

Although referendums are contributing to higher tax bills, they “mean money for education at a time when school systems are stressed,” Stein said.

Meanwhile, the state delivered a significant influx of funds into technical colleges with a requirement the money be used to lower property taxes. Levies for the state’s 16 technical colleges will fall by 3.4%, just the second decline since 2000, due to the additional state money, according to policy forum research.

In Madison, for example, the total tax bill for a $250,000 home in the Madison School District assessed at 100% of its fair market value was $5,336, among the highest in the county.

Tax bills began arriving in mailboxes in mid-December. The deadline for owners to pay at least the first installment of their property taxes is Jan. 31.

The initial deadline is the same in Madison, but the city has switched from the option of paying two installments to four, with the second installment due March 31, the third May 31 and the final on July 31, which is the same final due date as other municipalities in the county.

As the community emerged from the COVID-19 pandemic, it's been amazing to witness the creativity, dedication to causes and resilience that give hope and promise. I chose stories that reflect that dynamic, some involving long-held dreams, including pieces about a vision for the next Downtown in the wake of the pandemic and protests against racism, and the Bayview Foundation's plans for redevelopment of low-income housing into what will be one of the coolest neighborhoods in Madison. A proposal for an 18-story housing tower that would have razed the historic Wonder Bar with its gangster lore on the South Side revived a movement to save the building with the final chapters of the saga yet to be written. After fits and starts, the Wisconsin Historical Society chose a site for a long-sought, $120 million museum at the top of State Street. And I was able to document the move of a homeless man from the once sprawling homeless encampment at Reindahl Park near East Towne to the city's first tiny shelter encampment in an industrial area on the Southeast Side.

There's been so much more -- the plight of event venues amid the pandemic, the Urban League of Greater Madison's proposed Black Business Hub and the unveiling of plans for the Center for Black Excellence and Culture, both on the South Side, new investments and initiatives to address gun violence, the coming of bus rapid transit and a transit network redesign.

It will be something to watch so many of these ventures come to fruition in coming years.

Forging the Next Downtown

With hard lessons from the pandemic and protests, Madison looks to forge a more diverse, inviting Downtown.

The nonprofit Bayview Foundation is poised to launch a $50 million, low-income redevelopment that could become one of the city's coolest neigh…

McGrath Properties original proposal for an 18-million redevelopment, the tallest residential building in the city, would have razed the Colis…

The Wisconsin Historical Society, after picking a site for a new $120 million museum at the top of State Street, unveiled plans that show a gl…

With winter approaching, the city moved the first homeless from a sprawling encampment at Reindahl Park to 30 tiny shelters with heat on the S…

Snowstorm to hit all of Wisconsin on Tuesday. See how much will fall and when

Snowfall rates could reach an inch per hour Tuesday afternoon as the storm moves across Wisconsin, causing significant travel impacts, according to forecasters.

A half-percent sales tax that Brown County officials implemented in 2018 is legal even though it doesn't result in a dollar-for-dollar reduction in property taxes, the state Supreme Court ruled Friday.

A new study shows Wisconsin's housing market is strong with the total value of homes and other property sold in 2021 increasing at the fastest rate in about 15 years.

The city's new assessments showed double-digit increases for commercial and residential properties with a record for new construction. 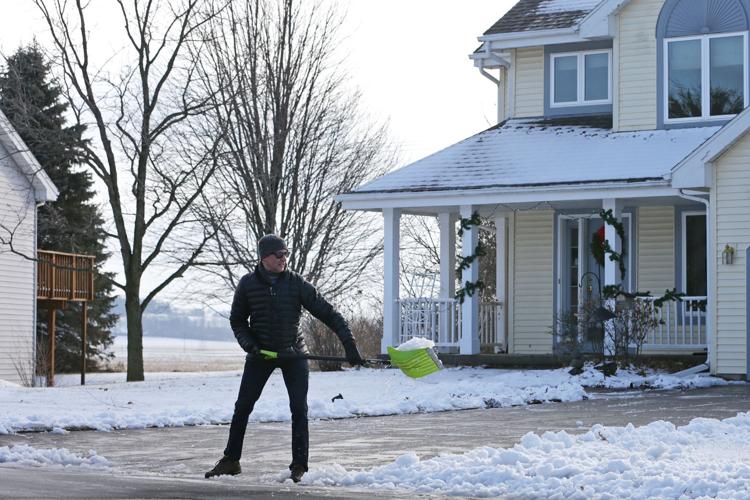 At $5,590 for a $250,000 home assessed at 100% of its fair market value, Fitchburg homeowners in the Verona School District pay the second-highest average property tax in Dane County. Fitchburg homeowner Steve Deutsch, above, said it's worth it. "I'm happy to pay them," Deutsch said of his taxes. "It's good for the school district." 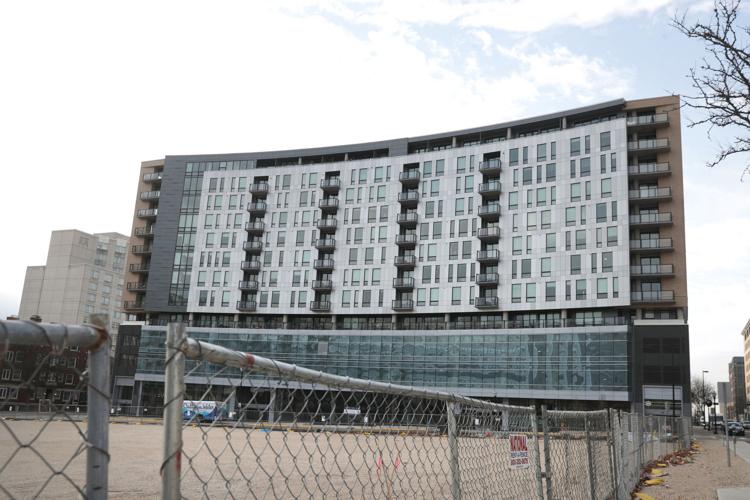 New construction, such as this part of Judge Doyle Square Downtown and, in the foreground, an empty lot due to house a hotel, allows municipalities to increase tax collections. 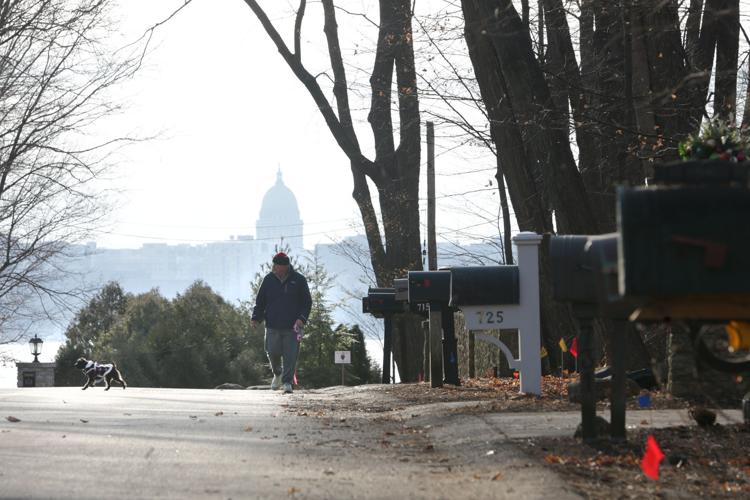 Patrick Hansen, of Annapolis, Maryland, walks his dog Stogie along Farwell Drive in Maple Bluff while visiting his dad for the holidays. The property tax on a fair market value home worth $250,000 in Maple Bluff is $5,038 for 2021. 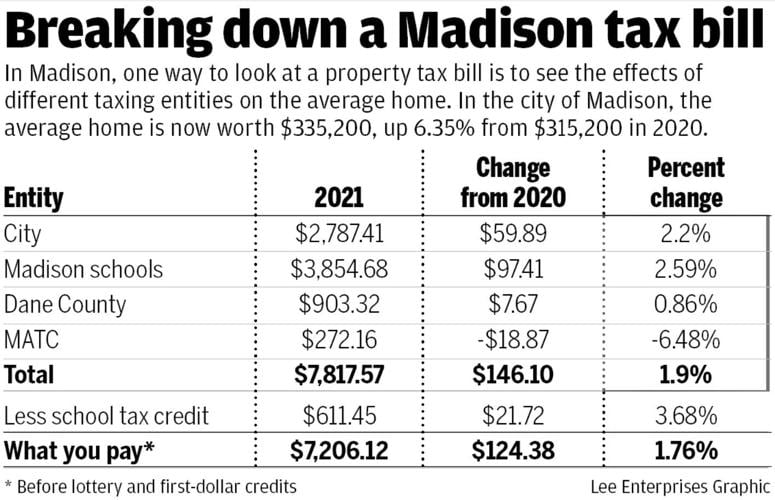