The former state Supreme Court justice leading the GOP-ordered review of Wisconsin’s 2020 election faces a new lawsuit following recent comments he made indicating that he deletes records he deems irrelevant to the taxpayer-funded probe.

The lawsuit, filed in Dane County Circuit Court, points to comments Gableman made in recent testimony that he has deleted emails from his government email account. Gableman also said last week he had a staffer delete the personal email account he used in the early months of his review last year, making those records inaccessible.

“With respect to any given missing record, either the (Office of Special Counsel) has failed to conduct the required search of existing records — in which case it has violated the Open Records law — or the OSC has conducted the required search, but come up empty-handed because the OSC had already deleted those texts or e-mails — in which case it has violated the Public Records Retention Law,” American Oversight attorneys wrote in the lawsuit.

While testifying last week in a separate open records case focused on the first few months of his review, Gableman said, “did I delete documents? Yes, I did.”

“If I had to keep every scrap of paper, I would do nothing else,” Gableman told reporters on June 10 while in court for another case. “I would need a warehouse.”

In April, an attorney representing Gableman indicated in court filings that the office routinely deletes documents, including emails and text messages, that are deemed “irrelevant or useless to the investigation.” Attorneys have claimed Gableman is exempt from state record retention laws.

State lawmakers are exempt from Wisconsin’s record retention law, allowing them to regularly delete records, though requested documents must be retained if they exist at the time of a formal request. Schmidt wrote in the memo that such an exemption does not apply to Gableman.

“The OSC has deleted public records that don’t suit the faux election-fraud narrative, unabashedly flouting Wisconsin law,” American Oversight senior adviser Melanie Sloan said in a statement. “Citizens should have the opportunity to evaluate the OSC’s report for themselves based on the entire record, not just on the documents Gableman wants people to see.” 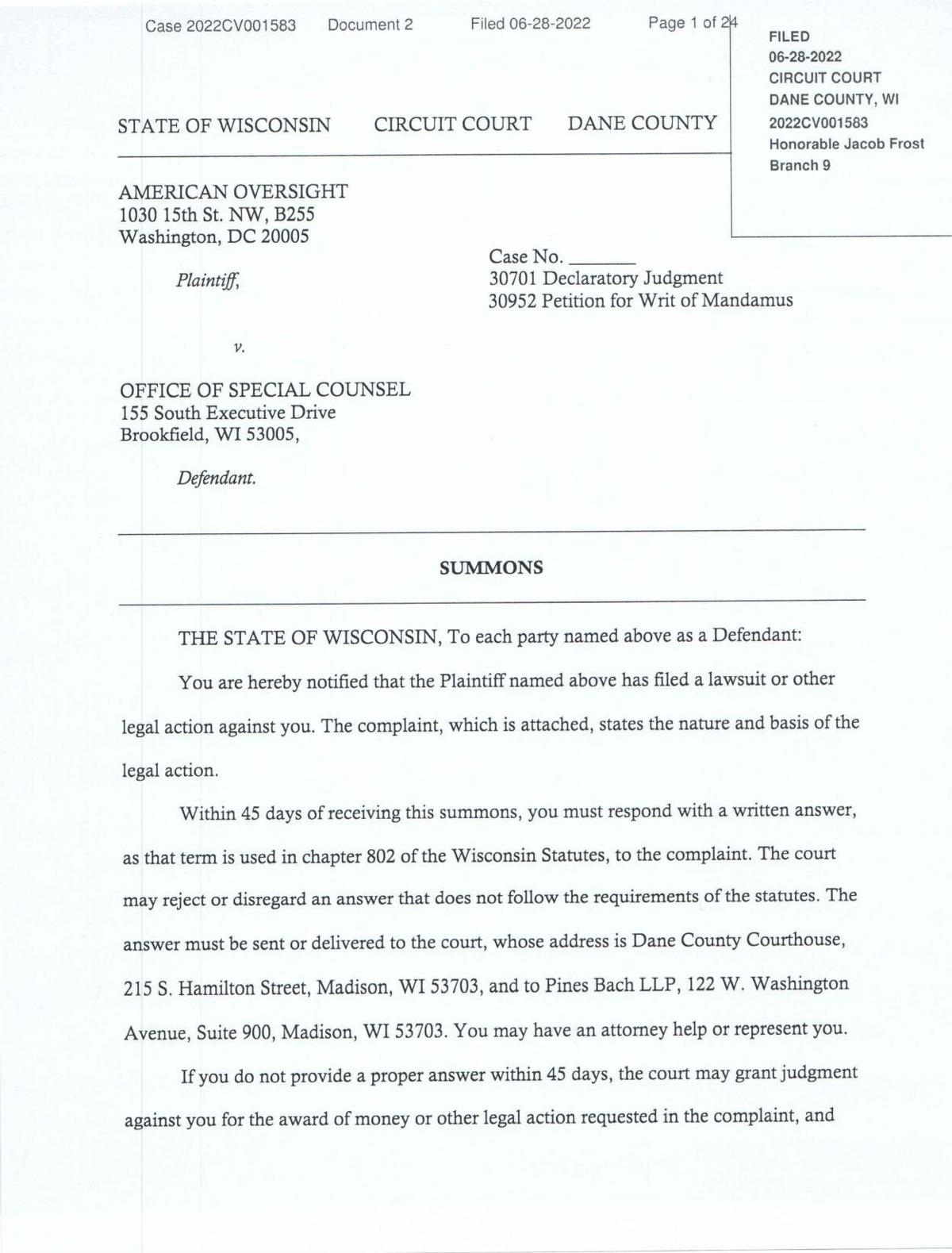 Gableman’s office and attorneys who have represented him in another American Oversight lawsuit related to public records did not immediately respond to a request for comment Tuesday.

In an affidavit filed by Gableman in a separate case Tuesday, the former justice said he has searched for and provided all documents relevant to American Oversight’s requests.

Gableman was hired by Vos under pressure from Donald Trump to review the election the former president lost to President Joe Biden by about 21,000 votes in Wisconsin. While the probe was originally allocated $676,000 in taxpayer funds, invoices have shown that ongoing court battles surrounding the review have pushed the cost to nearly $900,000.

A recount, court decisions and multiple reviews have affirmed that Biden defeated Trump in Wisconsin. Only 24 people out of nearly 3.3 million who cast ballots have been charged with election fraud in Wisconsin.

Vos earlier this year paused Gableman’s probe to allow time for pending lawsuits related to the review to play out in court and halved Gableman’s monthly salary from $11,000 to $5,500.

Dane County Circuit Judge Frank Remington earlier this month held Gableman’s office in contempt, offering a scathing rebuke of the former justice’s behavior in court a week earlier, when Gableman accused the judge of being a partisan “advocate.”

Remington ultimately held Gableman’s office in contempt for failing to adequately respond to the requests and ordered Gableman be fined $2,000 a day until he complies. He also directed Gableman’s “sneering” conduct in Remington’s courtroom to the office that regulates attorneys and judges in Wisconsin to take possible action against his license to practice law.

Gableman has appealed the ruling and is seeking a review by a three-judge panel in Wisconsin’s District 2 Court of Appeals in Waukesha.

In a separate case, Dane County Circuit Judge Valerie Bailey-Rihn last week ruled that Vos will not be penalized for a previous contempt order related to the case, but said she will decide later if Vos should face penalties related to how his office handled requests for records related to Gableman’s review. A hearing has been scheduled for July 28 in the matter.

"It appears to this court that at this point whatever records may have been responsive are gone … that's for a separate day," Judge Valerie Bailey-Rihn said.

While there's no consensus on whether the 1849 law is in effect, the threat of prosecution led Planned Parenthood of Wisconsin to halt abortions in the state.

Another judge orders Michael Gableman not to delete records

"Based on the undisputed evidence of Vos’ ineffectual records practices, I can draw no reasonable inference except that Vos did not search for records in the first instance," Judge Valerie Bailey-Rihn wrote.

“OSC does nothing more than summarize the hearings and decisions which have resulted, for the most part, in adverse rulings," Dane County Judge Frank Remington wrote in his rejection of Gableman's request for recusal.

The grievance follows a similar complaint filed last month by a Dane County judge for Gableman's courtroom conduct where he refused to testify and accused the judge of being a "partisan" advocate.

Gableman was hired last summer at a cost of $676,000 to taxpayers, but the legal fees and other court expenses have pushed the price tag to more than $1 million.