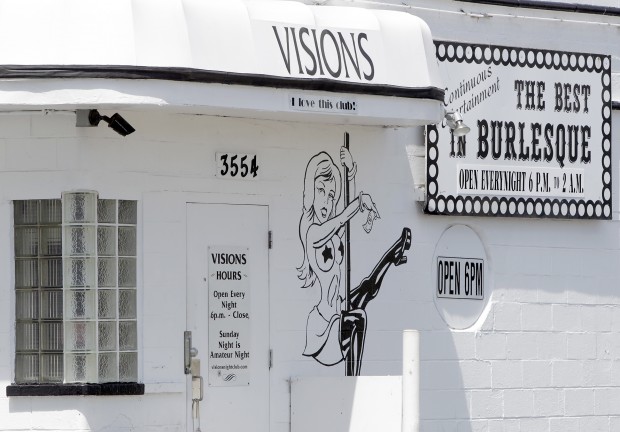 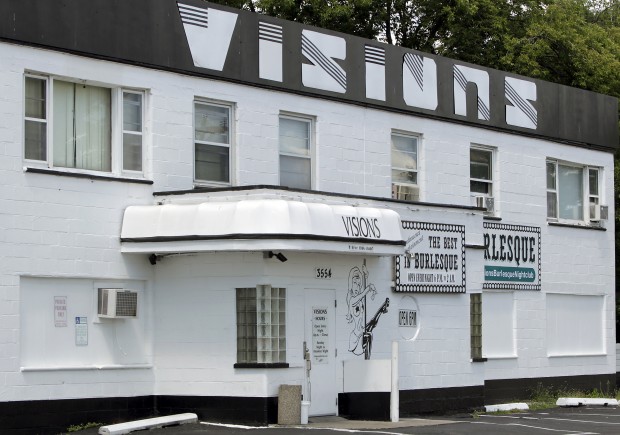 Madison has ordered a strip club to cover its racy new outdoor sign.

After receiving a complaint, the city Building Inspection Division ordered Visions Nightclub to remove an 8-foot, black-on-white graphic painting of a stripper on a pole on the front of the building at 3554 E. Washington Ave.

The sign, essentially a line drawing of a scantily clothed woman wearing boots clinging to a pole and holding a dollar bill in her free hand, is located below a canopy next to the nightclub’s main entrance.

The order is based on a violation of the public sign ordinance, not the content, Building Inspection Division Director George Hank said.

The city does not allow signs to be directly painted on a building. And the area of the sign, combined with existing signage on the structure, likely exceeded the total permitted signage area on the facade, Hank said.

The drawing is considered an advertising sign rather than an artistic expression because it directly promotes the business, he said.

Dean McConley, one of Visions’ owners, said the club is being singled out. He said other businesses, including the restaurant New Orleans Take-Out on Fordem Avenue, have larger murals painted on them.

“I love freedom of speech,” he said. “I thought this was a city of tolerance.”

Ald. David Ahrens, 15th District, sent a complaint to Building Inspection after learning about the sign from a constituent who thought it was inappropriate and “did not want to have to explain to my daughter what that woman was doing,” according to a city press release.

After hearing from the constituent, Ahrens learned no permit had been issued for the sign.

“There is a place for signs like this. It’s called Las Vegas. Or after admission is paid,” Ahrens said. “I doubt most people in our community want these images on public display.”

The order requires the sign be gone by Aug. 8.

Visions would be free to seek a permit for a sign that met code standards, Hank said.

The club's inability to use the parking lot of the former Prime Quarter Steakhouse has caused Visions owners to inquire about relocating, according to city staff.

Chris Rickert: As neighbors go, it could be a lot worse than 'adult' entertainment

Does it still make sense to restrict where anachronistic flesh-peddlers can ply their dubious trades?