Madison’s police union president says Mayor Satya Rhodes-Conway has done the police and police-community relations a “significant disservice” by criticizing the actions of an officer who participated in the forceful, videotaped detention of a black, mentally ill teenager before an independent review of the June 3 incident has been completed.

In an Aug. 2 email to staffers and City Council leadership — which she later posted in a slightly edited form to her blog — Rhodes-Conway said the “officer’s actions may or may not have violated the law, and may or may not have violated (Madison Police Department) policy; however, police actions in this incident are not and will never be acceptable as best practice in the city of Madison.”

The mayor’s “judgmental statements … are of enormous concern to our members,” Madison Professional Police Officers Association president Kelly Powers said in a statement to the mayor released Thursday. 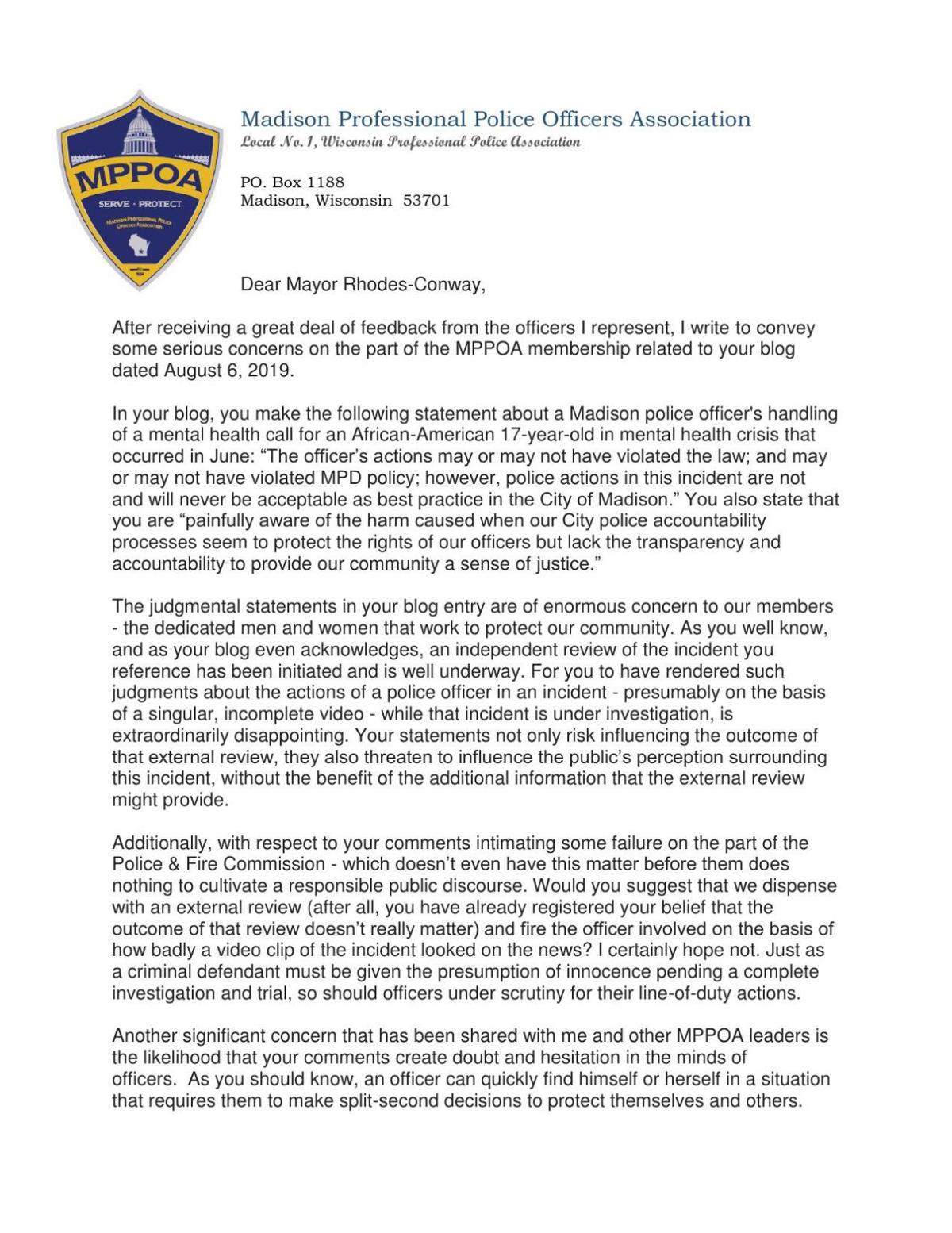 “As you well know … an independent review of the incident you reference has been initiated and is well underway,” he wrote. “For you to have rendered such judgments about the actions of a police officer in an incident — presumably on the basis of a singular, incomplete video — while that incident is under investigation, is extraordinarily disappointing.”

“What should our officers take away from your most recent blog?” he asked. “Despite how the laws, rules, policies and training might ordinarily govern their actions, should they now be told to first ask themselves, ‘What would Mayor Rhodes-Conway do?’”

In a statement issued Friday, Rhodes-Conway said she respected the concerns of the union and “as with every constituency, I am committed to creating open dialogue with the intention to understand their concerns from their unique perspective.”

“I have confidence the MPD will be conducting their investigation of the incident in question through the lens of all of the relevant MPD policies, as well as our shared city values,” she said.

Video of the June detention — taken from inside the foster home where the teen lived — shows Sgt. Joseph Engler delivering three blows to the teen’s head as three other officers try to restrain the teen.

Engler was put on “restricted duty” after the incident. Police spokesman Joel DeSpain said Tuesday there is no timeline for the MPD’s Professional Standards and Internal Affairs office to finish its investigation which, when completed, will be sent to an outside agency for review. Police Chief Mike Koval has declined to name that agency.

Powers said in an interview Friday that he met with Rhodes-Conway “at length” on Wednesday night and that she asked him to re-read her emailed statement — which she posted in a slightly edited form to her blog Tuesday following the State Journal’s inquiries — because “by her account, she was not individually attacking an officer.”

Powers disagreed with that assessment, adding that “her commentary has a great deal of impact on how these cops do their jobs.”

Rhodes-Conway’s Aug. 2 email also referred to a meeting she held in June with community leaders, including Police Department officials, to discuss the incident. It outlines changes to police practice and training — including the possible implementation of a “mental health ambulance” program — that her office is pursuing.

Other “next steps,” she wrote, are employing a black mental health practitioner in Police Department training, partnering with “local education institutions to grow (the) black practitioner pool for future community engagement,” and appointing Jacqueline Boggess, executive director of the Madison-based Center for Family Policy and Practice, to the city’s Police and Fire Commission.

The mayor’s chief of staff, Mary Bottari, on Tuesday pointed to the Eugene, Oregon-based crisis intervention agency CAHOOTS as one example of a mental health ambulance service. Under the program, anyone concerned about a person experiencing a mental health crisis in the Eugene-Springfield metro area can call the local non-emergency police and fire dispatch number 24 hours a day and a crisis worker and medic will respond.

Koval said Tuesday that his department “has been and will continue to be receptive to undertaking systems improvements that promote transparency, accountability, and trust with the constituents we serve.”

The mayor’s criticism of the police response also concerned Alds. Zachary Henak, 10th District, and Paul Skidmore, 9th District, both of whom reviewed the Aug. 2 email.

The police union endorsed Rhodes-Conway and was “attracted to what you held out to be a genuine interest in communication and collaboration,” Powers wrote in the Thursday statement.

“We remain hopeful and ready to work with you and your office should you decide to pursue such an approach,” he wrote.

In a letter to Powers Friday, Rhodes-Conway said she hoped officers take away from her comments “that I believe the fundamental duty of police is to serve humanity, and that any way we can do better in that duty should be considered.”

“I look forward to developing a collaborative working relationship as I understand the importance of seeking feedback from city employees closest to the work,” she said. “I value the dedication, time, and outstanding service our officers provide every day.”

The video of the June 3 incident shows Sgt. Joseph Engler delivering three blows to the teen's head as three other officers try to restrain him.

One of the teens had contacted an unknown person through Snapchat to sell his shoes. The "buyer" and another robber showed up with handguns to get the shoes.

Flames could be seen coming out of the church's steeple. Services were canceled Sunday because of the damage.

One woman, who accidentally punched a police officer in the struggle, was arrested and taken to jail.