Is your neighborhood gentrified? Madison report identifies areas of displacement
Share this
{{featured_button_text}}

As Madison renters prepare for the annual August shuffle when most downtown apartment leases turn over, housing affordability concerns remain a top concern.

Now, the city has data to back up anecdotal evidence about which Madison neighborhoods are experiencing gentrification and where people are being displaced due to factors out of their control like rising rent prices. Armed with the new information outlined in the Equitable Development in Madison report, city staff hope to generate discussions on how to prevent displacement of long-term renters and homeowners.

“Anytime we can put data and have fact versus anecdote, that certainly raises the conversation,” said Dan McAuliffe, city planner and co-author of the draft report. “Certainly our hope is that it gets a little more attention and continues to be on the mind of policymakers.”

McAuliffe and fellow city planner Urvashi Martin wrote the report, following up on a recommendation from the recently adopted Oscar Mayer Strategic Assessment report that asked for an evaluation of how housing prices, which seem to be increasing rapidly in Madison, are affecting displacement and gentrification within the city.

The median rent in Madison increased 23% over the most recent five-year period for which Census data is available, which is well above the 6% inflation occurring during this time, according to the report. Costs for owning a home are following a similar pattern.

To better understand and minimize the effects of gentrification — a market-driven racial and socio-economic reconfiguration of urban communities that have suffered from a history of disinvestment — the planners studied where displacement is occurring or could occur. They did this by analyzing how the cross-section of economic vulnerability, demographic changes and housing market conditions can indicate or lead to gentrification.

“We want to make sure there is a place in the neighborhood for everyone,” McAuliffe said. “We certainly don’t want to create situations where neighborhoods are changing so quickly that we’re pricing people out.”

The report also compiled 20 strategies that the city is doing or could consider to support equitable development and ultimately prevent the displacement of long-term renters and homeowners.

“Our goal is to really think about how we can grow as a city and still maintain affordability, particularly in central areas,” McAuliffe said.

City staff emulated a study commissioned by the city of Portland, Oregon, and analyzed economic vulnerability — measured by comparing the rate of renters, people of color, educational attainment and income — demographic changes like owner occupancy and race, and housing market conditions.

Together, the three data points illustrate one of seven categories of displacement — when households are forced to move or are prevented from moving into a neighborhood due to conditions beyond their control.

Areas with vulnerable populations, no recent demographic changes and affordable and stable housing are considered susceptible to gentrification or displacement. These areas are largely located along major transportation corridors, including the Beltline and Northport Avenue, and have lower development pressures.

Areas that are beginning to see gentrification or are exhibiting conditions leading toward displacement include the central areas of Tenney-Lapham, Emerson East, Sherman and South Madison. These areas have not seen demographic change but have experienced more rapid rent and property value increases.

The area bounded by Mineral Point Road, Gammon Road, Raymond Road and Whitney Way is considered to be nearing dynamic changes of gentrification and displacement, displaying some demographic change but not rapid growth in housing costs.

The Capitol Square and Atwood areas, which include Milwaukee Street and the Darbo-Worthington area, are in late stages of gentrification and displacement. Both neighborhoods were previously considered to have economically vulnerable populations but have since seen an increase in people with a college degree and median incomes and fewer people of color and rentals.

Atwood saw residents with bachelor’s degrees increase from 44% to 63%, which correlated with a 37% increase in median income. Rentals as a portion of housing units declined 4.5% in these neighborhoods between 2010 and 2017 at the same time as home values increased by 16.4%, outpacing the citywide average of 10.7% and inflation of 12.1%.

Identifying areas that are transitioning toward gentrification may show the locations with the only real concentrations of more affordable housing, particularly rental, in Madison, according to the report.

Areas that are not highlighted as a risk for displacement does not mean continuing affordability. These areas historically had higher values and are not affordable to a majority of Madison residents.

Without affordable options, transit access will decrease for lower-income households, according to the report. Transit is more accessible in the city’s central areas, however, residents who may rely more on public transit are being pushed to the city's periphery.

Mayor Satya Rhodes-Conway has said her administration is “championing” the expansion of the city’s transit system and moving toward implementing bus rapid transit, which was a major platform of her campaign for mayor.

“The challenge will be to leverage these improvements while maintaining existing character and encouraging new or rehabilitated housing affordable to existing residents,” the report states.

New housing could contribute to the overall affordability of housing in Madison.

During and throughout the recession, Madison’s economy remained fairly strong and the population continued to grow. However, construction effectively stopped and the apartment vacancy plummeted from a healthy 5% to 1%. This was accompanied by rapidly rising rents.

“If supply doesn’t keep up with demand, this will happen again and those at the bottom end of the income scale will be impacted most,” the report said.

Some strategies, like inclusionary zoning, rent control, density bonuses and stronger eviction protection laws, have legal barriers to implementation. Staff recommends creating partnerships at the state level if these potential long-term strategies are to be implemented.

Not all of these strategies would be easy to implement. Some are resource-intensive or require code changes, voter approval or commitments from outside the city.

Correction: Eastmorland was not identified through the study as a risk for displacement because it is nearly exclusively single family housing, so renters have few options.

“As we talk about our economy ... our employment rates and income and economic mobility for each race is not growing at the same pace,” said Linette Rhodes, the city’s interim community development supervisor.

Explainer: What is affordable housing?

“I even hate that we say ‘affordable housing,’ because ‘affordable’ means something different to every single person that you talk to,” said Linette Rhodes, the city's interim community development grants supervisor.

“We have to start thinking about regional and metropolis wins," Urban League president and CEO Ruben Anthony said. 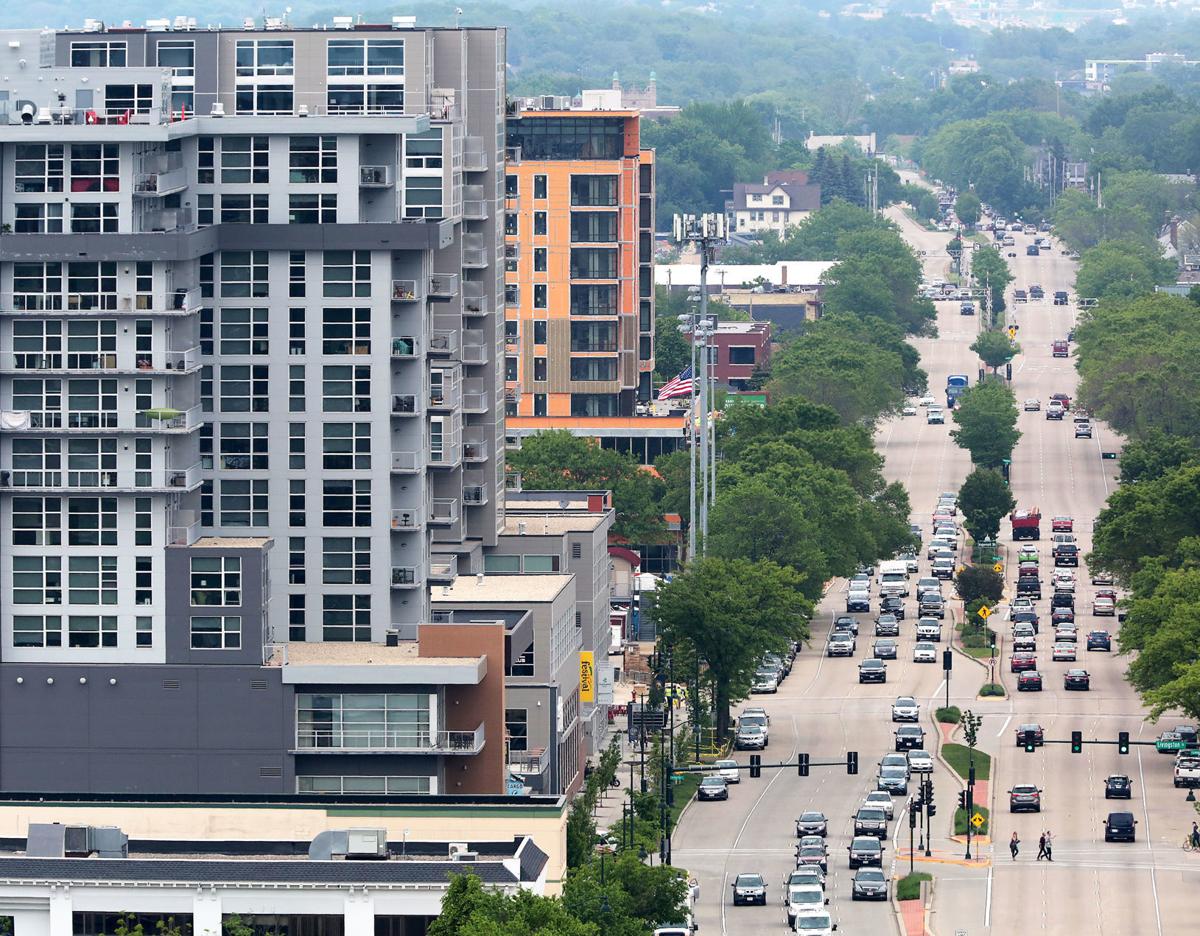 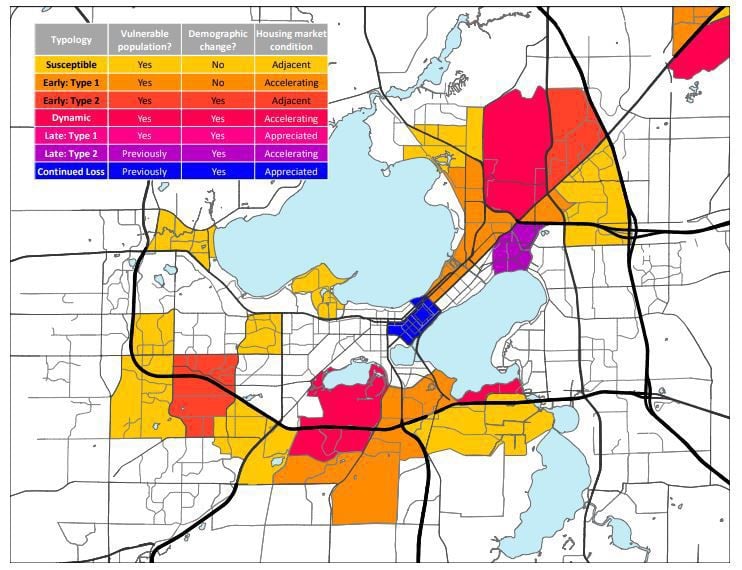 According to the report, identifying areas that are transitioning toward gentrification may show the locations with the only real concentrations of more affordable housing, particularly rental, in Madison. 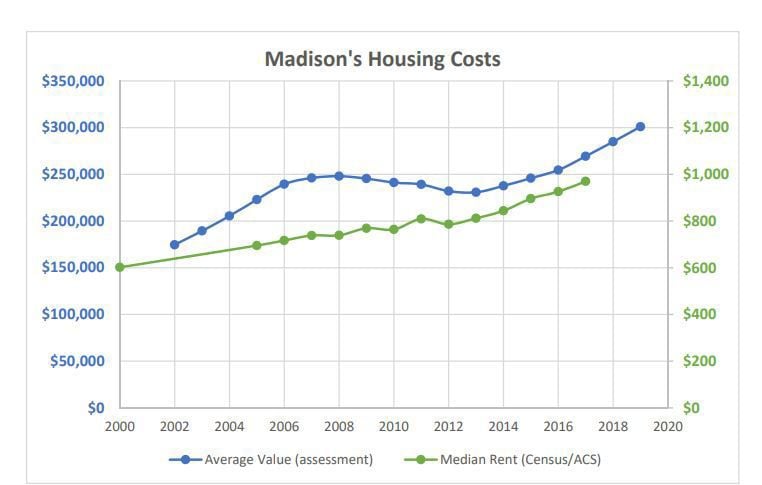 The median rent in Madison increased 23% over the most recent five-year period for which Census data is available, which is well above the 6% inflation occurring during this time.