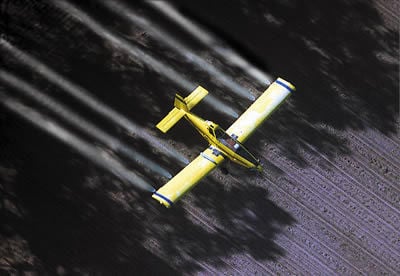 Wisconsin plans to curtail aerial spraying for gypsy moth caterpillars in the eastern two-thirds of the state because of reduced demand for the service. 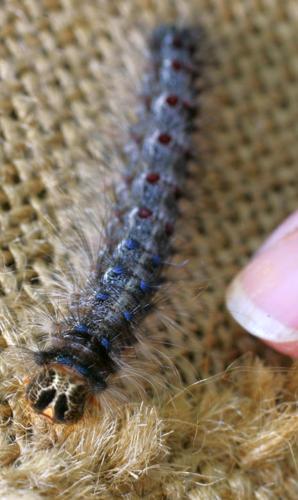 Wisconsin is reducing its efforts to slow the westward spread of the leaf-eating gypsy moth and preparing to end altogether a program that helps beat back localized outbreaks in already infested parts of the state.

The end of the aerial pesticide spraying program that has been available in 50 infested eastern counties is being prompted by a decline in requests from local communities and by the emergence of private-sector alternatives to federally subsidized spraying, a state Department of Natural Resources spokeswoman said.

Meanwhile, federal budget cuts and increased demand in other states are contributing to a sharp reduction in western Wisconsin acreage expected to be sprayed in 2018 in a separate program designed to slow the spread of the pest to other states, said a spokeswoman for the state Department of Agriculture, Trade and Consumer Protection.

The U.S. Forest Service and the state agriculture department have been searching out isolated outbreaks in the western part of the state and hitting them with compounds like insecticides and spray that disrupts adult mating.

“The longer you can delay it, the less expensive it is for Minnesota and other states to the west,” Gilson said.

But federal funding for the “Slow the Spread” program is being cut roughly 20 percent nationally from about $9 million to about $7 million, Gilson said.

A 2016 Forest Service report said the program nationally slowed the gypsy moth’s rate of spread by more than 60 percent, from an average of 13 miles per year to less than 5 miles per year, reducing environmental damage and financial losses on more than 125 million acres since 2000.

The invasive species is established in 19 states and the District of Columbia, or about one-third of its potential range in the U.S.

Wisconsin is one of 10 states on the leading edge of the North American gypsy moth infestation, according to the U.S. Department of Agriculture.

Gypsy moths were introduced in Massachusetts more than a century ago. The caterpillars can defoliate, weaken and kill more than 300 different species of trees and shrubs, according to the USDA. Since 1970, more than 83 million acres have been defoliated by the gypsy moth in the U.S.

Healthy trees can bounce back after a season or two without leaves. Heavy infestations can be unpleasant because gypsy moth caterpillars shed skin and hair some people are allergic to, and they excrete droppings called frass.

The species first defoliated trees in Wisconsin in the late 1990s. The pest’s population has grown rapidly a few times and then collapsed.

“They’ve really been a minor issue overall in the last five or 10 years,” said P.J. Liesch, who directs the UW-Madison Insect Diagnostic Lab.

Their numbers have been kept in check by a fungal disease, along with the state DNR’s aerial insecticide spraying program and quarantines designed to prevent people from carrying the insect’s eggs to new places.

Earlier this month, the DNR held public hearings on a proposed rule change to allow the department to end its role delivering up to 50 percent of the cost of spraying requested by local communities in the eastern two-thirds of the state.

Except for when there were small outbreaks in 2004 and 2008 and a larger one 2010, there have been relatively few requests, and private companies are available to be hired to spray for gypsy moths, unlike when the state first started its program, said the DNR’s Andrea Diss-Torrance.

“The private sector is now prepared to handle it, and we should do what private sector can’t,” Diss-Torrance said. Ending the gypsy moth program will allow the department to concentrate more resources on other problems such as the emerald ash borer.

DNR staff analysis of the proposed administrative rule change doesn’t specify when the program would end, that the state could continue the program to suppress gypsy moths on state land, and that the DNR’s policy board, the Natural Resources Board, would have authority to reactivate local community access to the money.

“We expect that business opportunities for local aerial applicators and arborists may increase with the deactivation of the state gypsy moth suppression program,” the analysis said in a section on business impacts. Administrative rule changes must be approved by the governor.

Wet springs tend to increase the prevalence of a fungus that is capable of knocking gypsy moth populations down quickly, she said.

Just two counties requested spraying under the DNR program in 2017. In Dane County, just under 190 acres were sprayed in three parts of Madison. Residential areas and state parks have been the main targets of spraying, Diss-Torrance said.

On its Gypsymoth.wi.gov website, the state provides information for landowners who want to fight gypsy moths on areas of 20 acres or less, and a list of private companies that can do aerial application of insecticide on larger areas.

The department plans to soon add to the web page a guide for groups of landowners who want to organize aerial spraying, Diss-Torrance said.

Liesch said he didn’t believe ending the DNR program would affect the speed with which infestations would spread into the western counties, and with budgetary limits that state agencies face, it’s not surprising that the department would take this step.

How to fight gypsy moths

October - April: Spray egg masses with approved horticultural oil, or scrape off and soak for two days in soapy water or microwave two minutes before disposal. Expect any eggs left behind to hatch.

Early June: Wrap trunks with 12- to 18-inch bands of burlap or neutral-colored cloth. Fold top half down over bottom half. Scrape off collected caterpillars into a bucket of soapy water daily.

A bright green bacterial bloom last week covered one-fourth of Lake Mendota, then slid down the Yahara with hundreds of dead fish.

Four caught near Prairie du Sac no cause for alarm but DNR stresses importance of following rules to prevent spread of invasive species.

Other waterways also are targeted.

Other groups plan to wash roots before selling donated plants in an effort to slow the spread of the pest.

The bloody-red shrimp was discovered in the lake near Superior, making it the last of the Great Lakes where the species has been found.

Wisconsin plans to curtail aerial spraying for gypsy moth caterpillars in the eastern two-thirds of the state because of reduced demand for the service.