A newly minted Republican lawmaker told a group of visitors to his state Capitol office that Republicans need to “cheat like the Democrats or bend the rules” to win upcoming elections, according to a hidden camera video posted online.

It’s not clear who shot the video, but it appears to have been taken near the end of Thursday’s Assembly session. One of the visitors appears to be discreetly taking the video and it does not appear Behnke knows he’s on camera. The visitors appear to be a small group of pro-Trump Wisconsin activists who were at the Capitol to meet with Republican lawmakers.

Behnke and Vos did not respond to requests for comment Friday.

The video was posted the same day that Vos and Republican leadership stripped Rep. Timothy Ramthun, R-Campbellsport, of a staff member for spreading a false claim that Vos had signed a deal with former lawyers for Hillary Clinton to authorize ballot drop boxes.

Ramthun in a statement Friday pushed back on ever making such a claim.

“Upon review of all written and posted communications by my office, including those most recent in an email of election evidence sent to the Legislature, there is no indication of me or my office making such a statement,” he said.

Ramthun also has been an outspoken promoter of false claims about the 2020 election. The visitors in the video appear to be staunch supporters of former President Donald Trump’s false claims that the election was stolen. President Joe Biden carried Wisconsin by almost 21,000 votes.

In the video, the visitors press Behnke to call for a “full forensic audit” of the election, something he said he supports. But Behnke suggests leaders like Vos and even some of the Assembly’s most conservative members, including Rep. Shae Sortwell, R-Two Rivers, who he says strongly dislikes Vos, haven’t seen enough proof of fraud to warrant such an audit.

Behnke says in the video that fellow conservatives Reps. Chuck Wichgers, R-Muskego; Janel Brandtjen, R-Menomonee Falls; and Scott Allen, R-Waukesha, support a Republican caucus vote to back a full audit of the election results, but there may not be 31 votes in the 61-member bloc needed to approve the measure.

At another point, Behnke says he’s convinced there was fraud in the election and hypothesized, “It could be 160,000, it could have been 16,000.”

The statement has no basis in fact.

The results of the 2020 election have been confirmed by county canvassing boards, which compare vote totals against paper records and other procedures designed to catch and correct errors; recounts in Dane and Milwaukee counties; post-election audits by local and state election authorities to identify cases of possible voter fraud, which are then referred to prosecutors; a voting equipment audit by the elections commission; and reviews by the nonpartisan Legislative Audit Bureau and the conservative Wisconsin Institute for Law and Liberty, which found ways in which elections could be improved but no evidence of widespread fraud. Multiple court rulings have also found no evidence of irregularities.

An analysis by The Associated Press found only 31 potential cases of voter fraud in Wisconsin’s 2020 election. In 26 of the 31 cases, prosecutors declined to bring charges after conducting a review.

At one point, one of the women meeting Behnke pushed back against his suggestion to “cheat like the Democrats,” which he states twice, saying, “We can’t be cheating. … I don’t agree with you on that. Otherwise, what are we? Just two gangs fighting each other.”

Assembly Majority Leader Jim Steineke, R-Kaukauna, who announced Tuesday he will not seek another term, said in a statement, “While I don’t agree with the way Representative Behnke shared his opinion, I do understand that there is a growing frustration with the way Democrats in the state have been pushing the envelope on our election laws.”

Steineke referred in his statement to guidance Dane and Milwaukee county clerks gave to voters ahead of the 2020 spring election in which they said voters could claim indefinitely confined status due to COVID-19 restrictions and thus not have to submit a photo ID with their absentee ballot. The bipartisan Wisconsin Elections Commission rejected that guidance, the clerks rescinded it before the 2020 presidential election and the Wisconsin Supreme Court ruled it was up to voters to decide whether they were indefinitely confined.

Steineke also referenced “ballot harvesting,” a term Republicans have applied to Madison’s Democracy in the Park event, in which deputized clerks collected 17,000 absentee ballots at city parks. There is no evidence the event resulted in fraud, and the Supreme Court declined to rule on its legality while a lower court deemed it legal.

In the video, Behnke also took aim at Evers for his stay-at-home orders issued in the early days of the COVID-19 pandemic, which the state Supreme Court struck down, saying he feels like punching the governor but hasn’t come face to face with him yet.

In response, Evers’ spokesperson Britt Cudaback said the governor “believes in doing the right thing and leading with kindness, respect, empathy, and compassion. It’s a shame those Wisconsin values seem to be lost on Republicans in the Legislature.”

Behnke was elected in an April special election to the Assembly seat previously held by Rep. John Nygren, R-Marinette.

Wisconsin Democratic Party chair Ben Wikler called on Vos to investigate the incident, strip Behnke of his committee assignments and remove him from the caucus.

“Behnke’s suggestion that Republicans should cheat in elections, while on taxpayer-funded time inside the Capitol, appears on its face to constitute illegal electioneering while serving in an official capacity — and a disturbing encouragement of further illegal behavior,” he said.

Court rulings have found nothing illegal about the more than $10 million in grants CTCL distributed to about 214 Wisconsin municipalities.

Millionaire Alex Lasry gets extension, won't have to disclose assets until after August primary

The Democratic U.S. Senate candidate got the same extension last year when he reported millions of dollars in personal wealth.

Robin Vos' attorney: 'I don't have control over Mr. Gableman'

$1,000 payments to Dane County employees in peril; County Board not in favor ahead of vote

County crews built a bridge of stones to help a tow truck drive into the river and pull out the excavator.

Gov. Tony Evers met Friday with members of the family of the victim, Johanna Balsewicz, and shortly after sent a letter asking for "immediate and expeditious" reconsideration of her killer's parole.

The lawsuit seeks $2,000 fines against the "electors" and up to $200,000 each in punitive damages for the plaintiffs.

The protest, organized by Planned Parenthood Advocates of Wisconsin, took place on the same day dozens of other demonstrations were scheduled in cities and state capitols across the country as well as Washington, D.C. 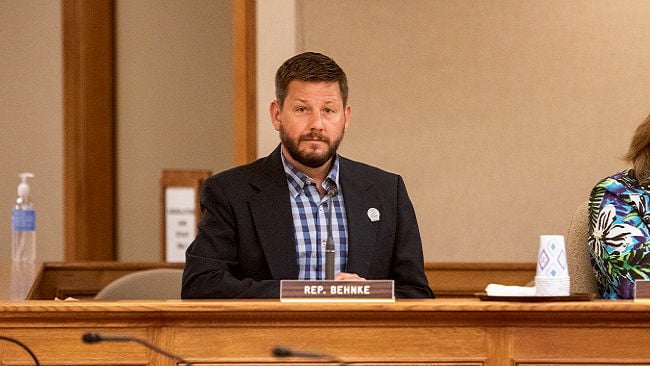 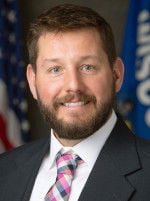