People with disabilities risk consequences for exercising their right to vote after the Wisconsin Supreme Court said absentee ballots returned in person must be done so by the voter, according to a federal lawsuit filed in Madison Friday.

The lawsuit, against the Wisconsin Elections Commission and its administrator Meagan Wolfe, also challenges Wolfe’s assertion — in response to the court’s ruling — that only voters can deposit their ballots in the mail.

The plaintiffs, all of whom live with disabilities, state many Wisconsinites with disabilities simply cannot vote if they can’t receive help from somebody to mail their ballots for them or deliver them in person.

“When a state makes it impossible for some voters with disabilities to vote at all, it violates the U.S. Constitution,” the lawsuit states.

The plaintiffs are asking the U.S. District Court in the Western District of Wisconsin to declare that Wisconsinites with disabilities are entitled to receive help returning their ballots. The plaintiffs allege violations of the First and Fourteenth Amendments as well as numerous federal laws, including the Voting Rights Act and Americans with Disabilities Act.

The plaintiffs are being represented by attorneys at the law firm Law Forward as well as attorneys from the firms Stafford Rosenbaum and Wilmer Cutler Pickering Hale and Dorr.

Just over three months out from the Nov. 8 general election, the lawsuit states, “many Wisconsin voters with disabilities face the imminent threat of discrimination or disenfranchisement, both of which are prohibited under federal law.”

An Elections Commission spokesperson did not immediately respond to a request for comment.

In early July, the Wisconsin Supreme Court ruled absentee ballots must be delivered by mail or in person to a local clerk’s office or designated alternate site. The majority also held that no one but the voter can return his or her ballot in person. The court did not rule on whether voters can have someone else handle their ballot on its way to a mailbox.

But one week later, Wolfe told the media, “the voter is the one who is required to mail their ballot.”

“In combination with (the Wisconsin Supreme Court ruling), Administrator Wolfe’s comments delivered a disturbing message to voters with disabilities: ballot-return assistance is prohibited in all circumstances throughout Wisconsin,” the lawsuit states. 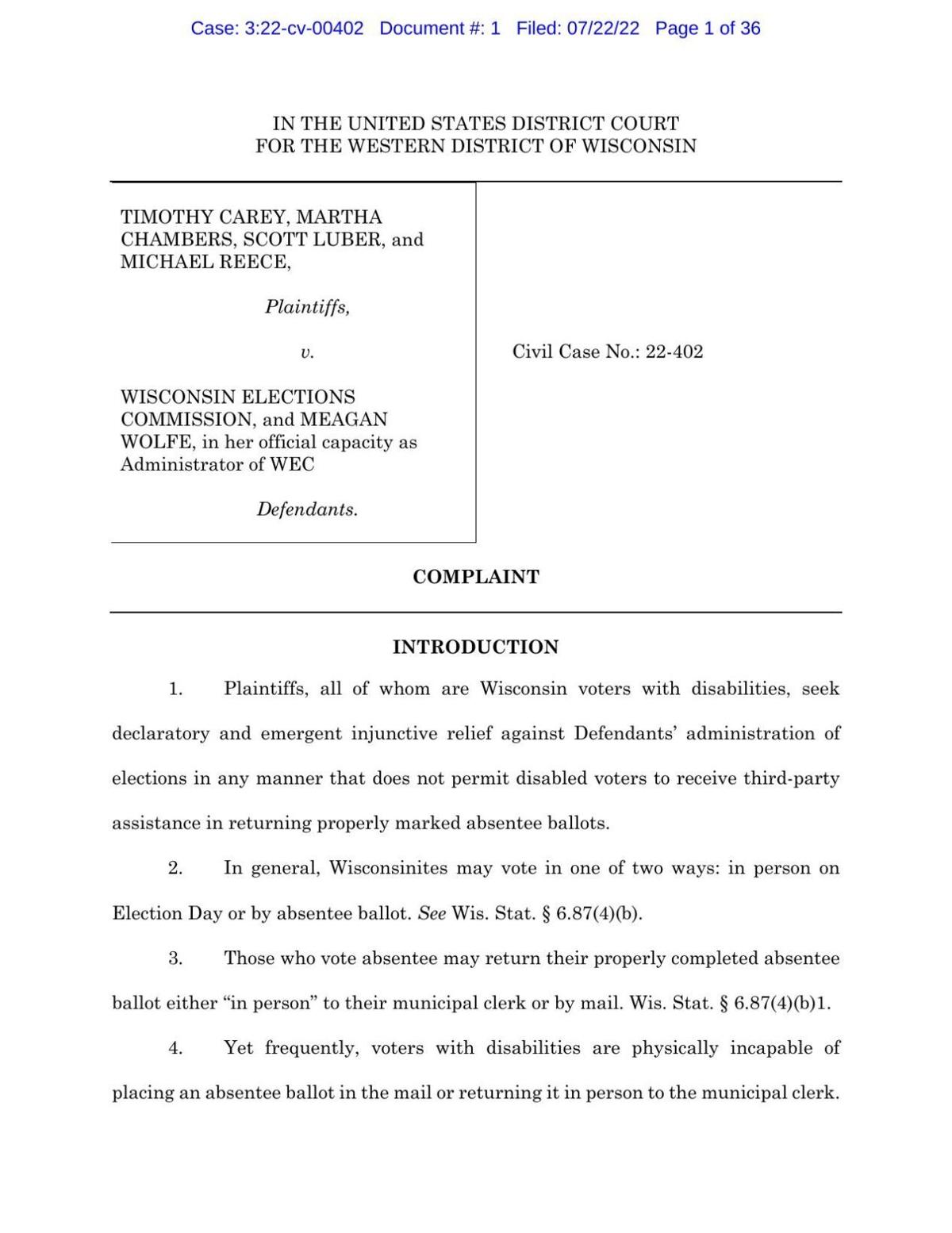 Following Wolfe’s comments, Elections Commission spokesperson Riley Vetterkind said her comment shouldn’t be interpreted as a policy statement or statutory interpretation. Instead, he said, it was a reference to state law that says absentee ballot envelopes “shall be mailed by the elector, or delivered in person, to the municipal clerk issuing the ballot or ballots.”

Under the Wisconsin Supreme Court decision and Wolfe’s application of the decision, the only way for the plaintiffs to lawfully vote is by physically returning their absentee ballots in person or by mail without help from a third party, the complaint states. But voting in such a way would be impossible for many Wisconsinites including the plaintiffs, some of whom live with cerebral palsy, muscular dystrophy and paralysis from the neck down, the lawsuit states.

Because of the court decision and Wolfe’s interpretation of Wisconsin law, the complaint states, “Plaintiffs are faced with an impossible, and unlawful, choice: abstain from voting altogether or risk that their ballots will be invalidated, or that their only available method to vote absentee (ballot-return assistance) could subject them to prosecution.”

That disenfranchisement, the plaintiffs state, is explicitly prohibited under several laws including the Americans with Disabilities Act. Under that law, public entities must create accommodations to avoid discriminating on the basis of a disability.

Among the Wisconsinites who filed the lawsuit is Timothy Carey, who lives with Duchenne muscular dystrophy and is unable to move his body, though he can use his mouth to control a power wheelchair to move around his home. Carey, who the lawsuit states requires a ventilator at all times, has always voted by absentee with the assistance of a third party.

Among the top four Democratic U.S. Senate candidates, Nelson was in last place in fundraising and trailed the pack in the latest Marquette Law School Polls.

Where the top Democratic U.S. Senate candidates stand on the issues

His exit all but cements Lt. Gov. Mandela Barnes' frontrunner status in the Democratic field.

Have Wisconsin's fake electors been subpoenaed? If not, 'it would be surprising'

Liberal group Law Forward sent a letter to the Dane County DA encouraging him to launch a criminal investigation into the fake electors.