The flurry of activity capped off a tumultuous post-election saga in Wisconsin that has now largely concluded, save for the counting of each state’s electoral votes on Jan. 6 in Washington.

Biden won the state by more than 20,600 votes, but the Trump campaign challenged more than 220,000 ballots in heavily Democratic Dane and Milwaukee counties in four broad categories.

In a 4-3 ruling written by conservative-backed Justice Brian Hagedorn and joined by the court’s three liberal-backed members, the court said instead of seeking to cancel people’s votes after they were cast, the campaign should have challenged the rules voters and clerks relied on before the election. Most of those rules have been in place for several previous elections and apply statewide.

“The challenges raised by the Campaign in this case — come long after the last play or even the last game; the Campaign is challenging the rulebook adopted before the season began,” Hagedorn said, drawing a sports analogy. “Striking these votes now — after the election, and in only two of Wisconsin’s 72 counties when the disputed practices were followed by hundreds of thousands of absentee voters statewide — would be an extraordinary step for this court to take. We will not do so.”

In their dissents, the three other conservative-backed members on the court made clear they considered at least some of the challenged election procedures unlawful and wouldn’t have ruled out tossing many of the ballots.

Hagedorn said the campaign’s delay in not seeking relief until after the election was “unreasonable in the extreme,” a decision that could harm election officials, other candidates, voters in the affected counties and voters statewide.

For Hagedorn, who was elected in 2019 with the help of Republicans, his joining with the court’s three liberal-backed justices further cements him as a crucial swing vote on the court and threatens to alienate him from his conservative base, though he doesn’t stand for re-election until 2029.

The meeting of the electors is typically a ceremonial task. But coming after multiple challenges by Trump and his allies to overrule the voters and reverse the outcome, the normally mundane meeting took on heightened significance.

Gov. Tony Evers was one of the electors and served as chairman of the meeting at the state Capitol.

“Today we did our part to continue the long and sacred tradition of our democracy of honoring the will of the people,” Evers said.

Still, Wisconsin’s Republican electors also met Monday and cast their votes for Trump at the president’s request. Their longshot plan was to send their votes to Congress in the hopes that another court could award the state to Trump before Jan. 6. State GOP chairman Andrew Hitt said that while other lawsuits were pending, the electors met to “preserve our role in the electoral process.”

There are two cases still pending in federal court.

End of the road

The Wisconsin high court’s decision Monday is likely the last in what has been a litany of legal maneuvers from Trump and his allies to turn back the popular vote in several key states and secure another term. Federal and state courts have dismissed dozens of those challenges, yet Trump, with the backing of many Republican lawmakers, continues to peddle claims of election fraud and irregularities and has vowed to “fight on.”

In her dissenting opinion, Chief Justice Patience Roggensack said she might have thrown out 17,271 absentee ballots dropped off at Madison’s two “Democracy in the Park” events. The event allowed voters who had previously requested absentee ballots to submit them at any city park to “volunteers,” as Roggensack described them — but who were, in fact, paid poll workers, according to Deputy City Clerk Jim Verbick.

She also said state law does not allow clerks to fill in missing address information from witnesses on absentee ballot envelopes, another category of ballots Trump sought to dismiss. 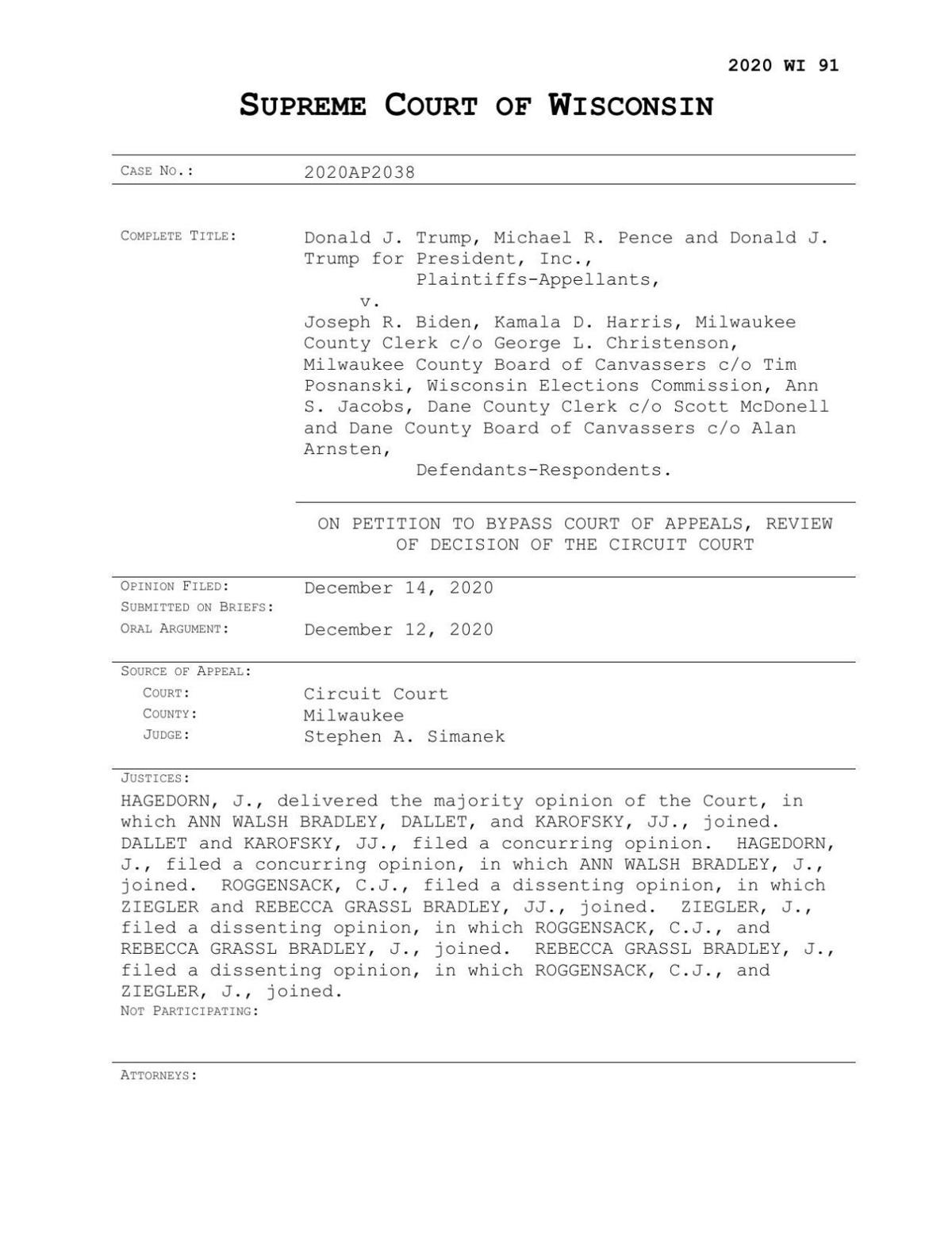 Roggensack and Justices Annette Ziegler and Rebecca Bradley all said the majority shirked its obligation to determine what Wisconsin election law states.

The three justices also said the majority relied too much on longstanding guidance from the Wisconsin Elections Commission, an agency charged with administering, not writing, the law.

“How astonishing that four justices of the Wisconsin Supreme Court must be reminded that it is THE LAW that constitutes ‘the rulebook’ for any election — not WEC guidance — and election officials are bound to follow the law, if we are to be governed by the rule of law, and not of men,” Rebecca Bradley wrote.

The justices, however, largely dismissed another of Trump’s claims challenging absentee ballots cast by voters who self-identified as “indefinitely confined.” The campaign alleged an explosion of such ballots this year suggested many of those voters were just using it as an excuse to not provide a photo ID, not to just avoid going to the polls during a pandemic. The justices found those claims lacked evidence.

The high court earlier on Monday ruled in a separate case that voters may self-certify as “indefinitely confined,” but only based on age, physical illness or infirmity, and not the condition of another person.

The ruling reiterated a ruling from the spring in which the court ordered clerks in Dane and Milwaukee counties to cease advising all voters they could claim the status, regardless of their circumstances, as a way to avoid physically going to the polls during the pandemic.

The court’s order has remained in effect ever since, including for the November election.

Monday’s decision was the latest in a string of defeats for Trump and his allies in court. On Friday, the U.S. Supreme Court rejected an effort by Texas to throw out the election results in Wisconsin and three other battleground states, and a Racine County reserve judge handed Trump a defeat in his state court challenge, which led to Saturday’s state Supreme Court hearing.

For the most part, the guidance followed in this year’s presidential election was the same guidance as in 2016, when Trump won.

I am disappointed with the Wisconsin Supreme Court's ruling on the presidential election. While the 4-3 ruling was an affirmation of our elect…

Trump had called the lawsuit filed by Texas against Georgia, Michigan, Pennsylvania and Wisconsin “the big one.”

Cold Tuesday for southern Wisconsin, but warmer weather on the way

Highs will be in the 20s Tuesday, but reach the 30s starting Wednesday, and even crack 40 next week, according to forecasters.

The man fatally shot by police near Fort Atkinson on Dec. 9 after shooting at officers was a suspect in a Monona credit union robbery earlier in the day, authorities reported Wednesday.

The future of the state health department’s ability to restrict public gatherings during a pandemic is now in the hands of the Wisconsin Supreme Court after oral arguments in a major case Thursday.

It's impossible to know whether the 37,481 people who returned the application form and later cast an absentee ballot would have done so had they not received the mailing.