The Republican-controlled Legislature on Wednesday rejected Democratic Gov. Tony Evers’ call to repeal the state’s anti-abortion law, which allows abortions only to save a mother’s life — a determination doctors say could be risky to make.

If doctors break the law, which could go into effect if the U.S. Supreme Court overturns Roe v. Wade, they risk a felony conviction punishable by up to 10 years in prison.

“This law was not written by physicians, and the language is incredibly vague and lacking medical specificity,” Planned Parenthood of Wisconsin spokesperson Lisa Boyce said, adding that the law was written before “our modern medical understanding and technology.”

“Therefore, we are forced to try to interpret the law through both a medical lens and a modern lens, and those interpretations can vary depending on who you are talking to — one of the many reasons this ban is so concerning for both providers and patients,” Boyce continued.

Wisconsin’s law, first passed in 1849, states abortions are only permissible when it’s necessary, “or is advised by 2 other physicians as necessary,” to save the mother’s life. The abortion must also be performed by a physician and take place in a licensed maternity hospital unless an emergency makes that an impossibility.

'I was a criminal': Women speak out about abortion before and after Roe v. Wade

(1)  Any person, other than the mother, who intentionally destroys the life of an unborn child is guilty of a Class H felony.

(2) Any person, other than the mother, who does either of the following is guilty of a Class E felony:

(a) Intentionally destroys the life of an unborn quick child; or

(b) Causes the death of the mother by an act done with intent to destroy the life of an unborn child. It is unnecessary to prove that the fetus was alive when the act so causing the mother's death was committed.

(5) This section does not apply to a therapeutic abortion which:

(a) Is performed by a physician; and

(b) Is necessary, or is advised by 2 other physicians as necessary, to save the life of the mother; and

(c) Unless an emergency prevents, is performed in a licensed maternity hospital.

(6) In this section “unborn child" means a human being from the time of conception until it is born alive.

Some instances in which a woman could require an abortion to save her life include ectopic pregnancies, preterm premature rupture of membranes and preeclampsia, said Dr. Kristin Lyerly, a Green Bay general obstetrics and gynecology doctor who serves as District 6 legislative chair for the American College of Obstetricians and Gynecologists. Lyerly, an abortion care provider who previously ran for the Assembly as a Democrat, said she sometimes deals with high-risk pregnancies.

The preterm premature rupture of membranes is when a woman’s water breaks early in the pregnancy, which could cause a severe and potentially fatal infection. With preeclampsia, women can develop high blood pressure and organ damage, also potentially leading to death. Likewise, ectopic pregnancies — when a fertilized egg grows outside the main cavity of the uterus — can be fatal.

“I’m really worried about it,” Lyerly said about the risk behind making the determination that an abortion is necessary to save a woman’s life. “And so are all of my colleagues who talk about it.”

Part of the concern is that decisions typically made by the patient and her doctor would now be scrutinized by people in the legal realm without medical training, Lyerly said.

“The political and social world like to see this as a black-and-white issue, but … it is an entirely patient-focused gray issue that can really only be well managed when there are no politicians in the exam room, and the conversation is all about what is the best thing for my patients,” Lyerly said.

Gracie Skogman, legislative director at the anti-abortion group Wisconsin Right to Life, said under the state’s law pregnant women facing life-threatening conditions “will be able to receive the medical care they need.”

“A lifesaving medical procedure or treatment for the mother, that may indirectly result in the loss of life for the preborn child, is not considered an abortion and is not classified as such under the law,” Skogman said.

Skogman clarified she was not referring to abortion as a lifesaving procedure. Her intent, she said, was to draw a distinction between medical procedures to save the mother “that may inadvertently result in the loss of life for the child” and an elective abortion.

But abortions are sometimes the only procedure that can save a patient’s life, according to a 2019 joint statement by the American College of Obstetricians and Gynecologists and Physicians for Reproductive Health.

Pro-Life Wisconsin legislative director Matt Sande said he dislikes the provision allowing exceptions for when a woman’s life is in danger because “we want to remove the broad and undefined ‘life-of-the-mother’ exception and replace it with language requiring equal care for mother and child and granting the physician immunity if he or she follows the requirement.”

Dan Lennington, deputy counsel at the conservative Wisconsin Institute for Law and Liberty, said traditional legal defenses such as the defense of others or necessity may, in some circumstances, justify a medical procedure that results in fetal demise. Lennington said that would still be true even if Wisconsin didn’t have an exception for the mother’s life.

While a legal case against an abortion provider could involve “difficult questions at the margins,” Lennington said, that’s not unique to abortion. “The law of homicide can also present hard questions, but they do not render us incapable of having a law of homicide. So it is with abortion.”

“The law is not clear,” said Dr. Douglas Laube, who does abortions at Planned Parenthood in Madison and is the former chair of obstetrics and gynecology at UW-Madison. “I believe that a well-stated, evidence-based reason for pregnancy termination would still prevail, and minimize, if not eliminate risk of criminal prosecution.”

A Legislative Reference Bureau attorney who declined to be identified by name said “abortion” and “necessary to save the life of the mother” are undefined under the criminal abortion statute.

“The decision of whether an abortion is necessary to save the life of the mother falls within the professional discretion of the physician, limited only by the physician’s scope of practice and the standard of care applicable to their medical practice,” the attorney said. “The physician’s decision must be reasonable considering the circumstances, but it is otherwise not limited by law.”

On Wednesday, the Legislature rejected an effort Evers made, as the U.S. Supreme Court is poised to overturn Roe, to repeal Wisconsin’s criminal abortion ban passed in 1849.

The Senate session lasted less than 30 seconds before Senate President Chris Kapenga, R-Delafield, gaveled out of it.

Referring to the imminent U.S. Supreme Court ruling, Evers said, “Republicans balked, leaving women and families across the state behind and providing no certainty or security for accessing the reproductive healthcare every person deserves.”

Republicans slammed Evers’ call to convene them in a special session when the governor announced it June 8, calling it a blatant political move. While Evers required lawmakers to gavel into the session, he could not require them to hold debate or advance the measures.

“I agree with the will of the majority of Wisconsinites that abortion should be legal in all or most cases,” Senate Minority Leader Janet Bewley, D-Mason, said in a news conference Wednesday morning.

Assembly Speaker Robin Vos, R-Rochester, supports rape and incest exceptions, which don’t currently exist in the abortion ban, spokesperson Angela Joyce said in a statement. Joyce did not respond to a question asking if Vos would try to add exceptions for rape and incest into Wisconsin’s abortion ban if Roe is overturned.

“If the legislature fails to act today, access to safe and legal abortion in Wisconsin will very likely be lost — at least temporarily, and possibly for much longer,” Democratic Attorney General Josh Kaul said in a statement.

That happened just an hour before a Pence aide denied Johnson chief of staff Sean Riley's attempt to pass those documents, which falsely stated Trump won Michigan and Wisconsin in November 2020, to the vice president.

Democratic Attorney General Josh Kaul, who is seeking reelection this fall, said the 2022 election “is going to be remembered for the next generation as the election that came after Roe was overturned.”

Abortion opponents want lawmakers to completely ban surgical abortions and to block medication abortions, a technology that wasn't around when the 1849 law was written. 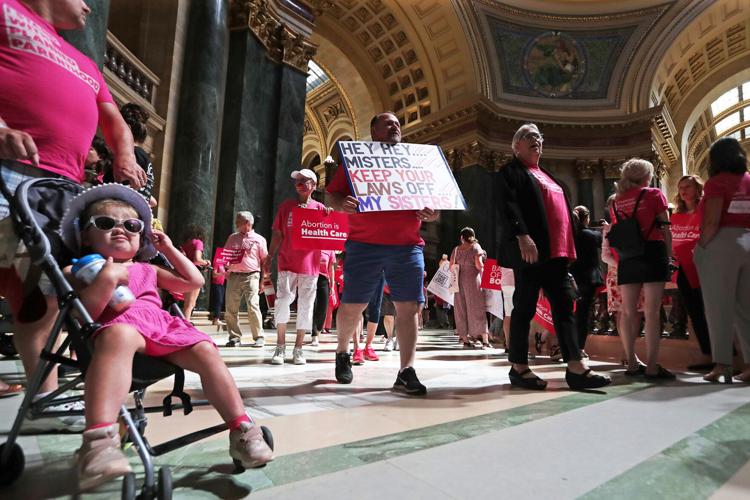 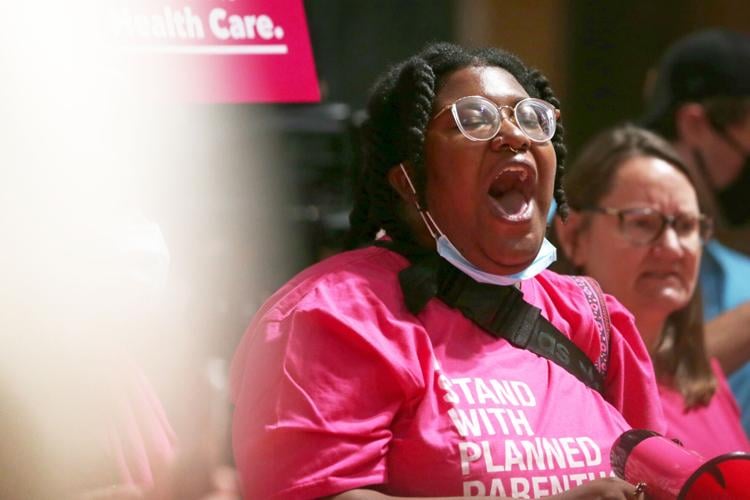 Darlene Johns leads call-and-response chants during a rally in support of Planned Parenthood and abortion rights on Wednesday. 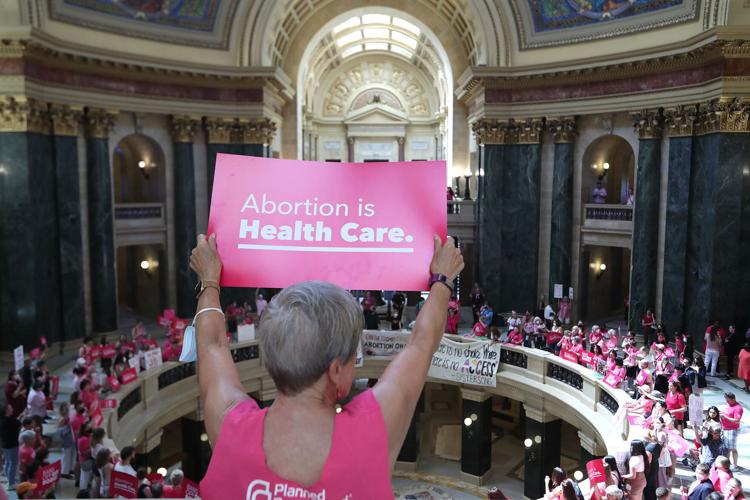 Gov. Tony Evers called the Legislature into special session to address the state's abortion law, but Republican lawmakers gaveled in and out without taking action.