Greg Rice, the current owner, submitted a notice on April 8 stating that he intends to apply to tear down the 12-story building at 131 W. Wilson St. — despite objections from Paisan’s. The building has closed and reopened twice over the last several months due to ongoing structural concerns.

The developer, who has an option to buy the site, has not stepped forward publicly as Rice addresses leases and other issues with existing tenants.

The proposed 14-story structure rising to the Capitol Height Limit would feature a two-story public lobby facing West Wilson Street, said Kirk Keller of Plunkett Raysich Architects, which is working with the development team. The first floor would offer about 1,400 square feet of retail space, which could accommodate a coffee shop with some seating in the lobby and outside, and 4,000 to 8,000 square feet of office space on the second floor, he said.

The structure would have multiple levels of underground parking with resident amenities on the second floor that would open to a second-floor deck above the parking garage with a pool overlooking Lake Monona, Keller said.

The proposal calls for 240 to 260 apartments on the third through 14th floors with a mix of unit sizes from true studios up to three-bedroom units, he said. “A wide variety to fit the needs of people who want to live in Downtown Madison,” he said.

No decisions have been made, but there’s “open discussion” about including lower-cost units, Keller said, adding, “The possibility is there.”

The proposed building has not been designed, but the development team has shared a preliminary concept showing the mass of the structure.

“With the building facing both West Wilson Street, Lake Monona, and as a prominent addition to the city skyline, a design balance is required,” Keller said. “The major sides of the building require different design considerations. One material, repeated around the entire exterior with a common repetition of windows is probably not the correct design approach for this addition to the skyline of the city of Madison.”

It is unclear if the developer will seek any public financial assistance.

“I think the proposed use and height and massing is quite predictable,” said Ald. Mike Verveer, 4th District, who represents the site. “It’s the trend Downtown.”

Keller made a presentation to the Bassett District of Capitol Neighborhoods Inc. on Monday evening.

“I think the neighbors in attendance were pleased with the energy efficiency and green aspects of the plans,” Bassett District chair Jonathan Cooper said. “Although the architect had no details, he did indicate that there have been conversations on including affordable units, something that is a focal point for Downtown and Isthmus neighborhood associations.

“This would be a large building on a tight site and concerns were expressed regarding the adequacy of the spaces allotted to move-ins/move-outs, trash and recycling pickups, and daily deliveries and drop-offs,” he said.

The impact of the additional traffic that would be generated on West Wilson Street, an already extremely busy Downtown arterial scheduled to have a two-way cycle track, the Dane County Jail expansion, and potentially another high-rise apartment at 139 W. Wilson St. added to this block, was also noted as a concern, he said. Another large, high-rise apartment building is already under construction at 145-151 W. Wilson St.

Verveer said he intends to propose an expansion of an existing, nearby tax incremental financing (TIF) district to the area to help pay for public improvements.

Next, Rice needs to file a demolition application, which would be considered by city committees and need final approval from Madison’s Plan Commission. Rice, who is president of Executive Management Inc., which owns the property, is shooting for that process to be complete by the end of June, according to the notice.

Walter Borowski, co-owner of Paisan’s, has called the demolition notice “a terrible development” in the ongoing saga of repercussions stemming from a degrading underground garage in the building.

The city ordered the property shut in September due to structural concerns raised in an engineering report and occupants of the building — constructed in 1971 — reportedly feeling a shaking or swaying inside. Temporary supports were installed in the parking garage, allowing it to reopen in October.

But the owners failed to keep up with the required inspections, causing another closure of the building in December. The building reopened in January after the city’s Building Inspection Division said common spaces were safe.

Plunkett Raysich Architects is not involved in the efforts of the current owners to remove the existing building, Keller said. “I have been informed the estimated demolition time is about seven months,” he said.

“It’s obvious the current building has outlived its useful life,” Verveer said. “The eventual demolition is a foregone conclusion. (But) my heart goes out to Paisan’s and other building tenants. They have gone through so much unnecessary harm and uncertainty through the last many months.”

The Downtown Madison office building that houses Paisan's restaurant could start to get razed as early as this summer if an upcoming demolition request is approved.

'We do not have any money': Judge orders cash-strapped Downtown building owners to pay for inspections

The owners of the building that houses Paisan's restaurant have been unable to pay an independent contractor to inspect a temporary fix of its underground garage.

A man with Wisconsin ties who posted numerous social media videos decrying the U.S. as a racist place awash in violence and recounting his struggle with mental illness remained at large Wednesday, a day after an attack on a subway train in Brooklyn left 10 people wounded by gunfire.

A worker was taken to University Hospital with burns after a fire Wednesday morning in an area under construction at Camp Randall Stadium, authorities reported.

"I believe they engaged in reprehensible conduct to force tenants to move out of the property," the tenant said of the owners, who want to demolish the office building.

The city and neighborhood partners are moving to transform a modest space atop a Madison Water Utility well overlooking Lake Monona into an artistic, comfy and engaging community destination.

Quad Capital Partners is proposing a 14-story project with about 337 apartments, 17,000 square feet of commercial space, plaza space overlooking the lake and underground parking on the 100 block of East Wilson Street.

Downtown Alder Mike Verveer said the city wouldn't allow the building or the street below to remain open if the building was actually at risk of collapse.

The city's Plan Commission is scheduled to consider the proposals on Monday with City Council consideration possible on June 7.

Despite owner's claim, city Building Inspection does not believe the building at 131 W. Wilson St. poses a threat of imminent collapse or hazard to the building occupants or community.

The building could be closed in June if owner Greg Rice doesn't comply with inspections of its underground parking garage.

Madison to building owner: Comply with inspections or shut down

The city of Madison has issued a noncompliance letter to the owner of a Downtown building that houses Paisan’s restaurant and will order the building closed if a required inspection isn’t completed by June 6.

Due to interest rates and rising construction prices, the developer will wait a year before razing nine vintage houses on the 500 block of West Washington Avenue for the project.

"You have to do these inspections because the tenants are still there and they have the right to still be there," Judge Valerie Bailey-Rihn said.

City staff notified the building owner on May 25 that inspection and monitoring reports to certify the continued safety of the building were not being submitted, according to a statement released by city building inspector Matt Tucker.

Madison may again use TIF to boost State Street, Downtown

A developer hopes to begin demolishing the closed, 12-story Downtown building in October and start construction next summer on a roughly $35 million, 15-story mixed-use project to replace it. 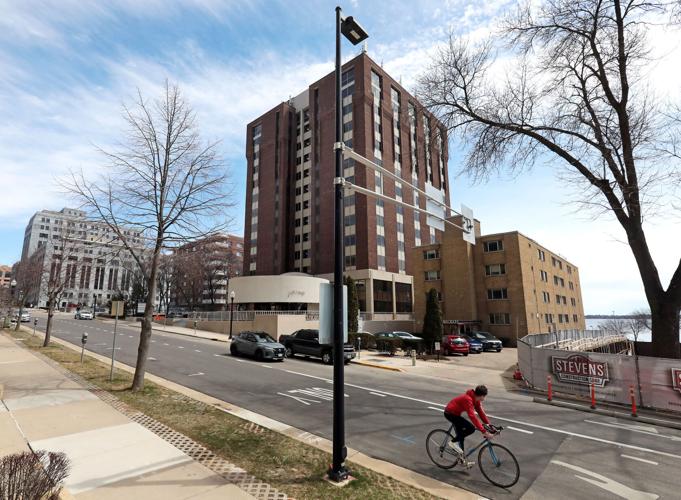 A developer is detailing concepts for a 14-story housing and commercial project that would replace an office building that houses Paisan's restaurant at 131 W. Wilson St. If approved, a demolition of the structure could begin this summer. 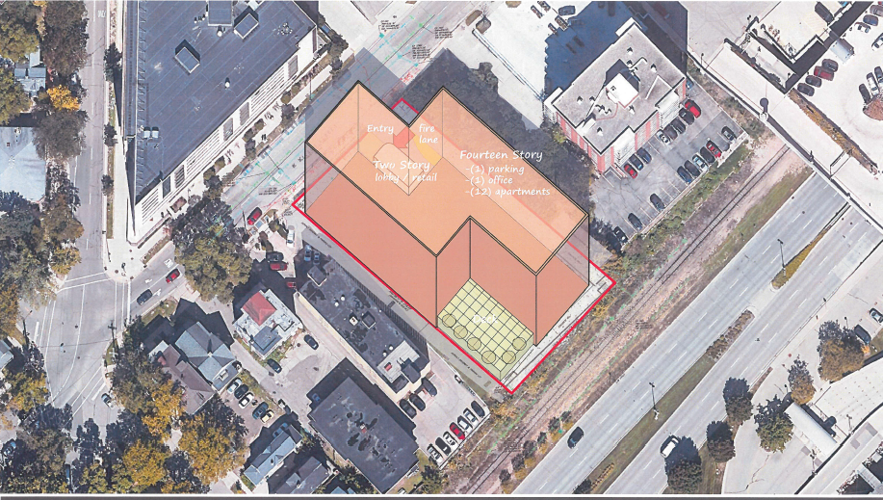 A rendering shows the possible massing of a 14-story redevelopment being proposed for 131 W. Wilson St.