The three finalists in a city design competition — Agency Landscape + Planning of Cambridge, Massachusetts; James Corner Field Operations of New York; and Sasaki of Denver — are proposing common themes like ecological restoration of the lake edge while offering starkly different ideas to dramatically transform the heavily used but bland lakefront into a destination for both visitors and residents.

Preliminary cost estimates for the projects range from $150 million to $250 million.

The city’s competition asked designers to come up with a master plan to better connect Capitol Square and nearby neighborhoods to the lake, improve water quality and aquatic habitat, celebrate Frank Lloyd Wright’s architectural legacy and preserve the lake’s cultural history.

“I am excited that Madisonians will get to see the presentations from the three design teams,” Mayor Satya Rhodes-Conway said. “It is a chance to envision a new waterfront and tell the city what elements they think are most important.”

Corner’s proposal would transform John Nolen Drive into a green, tree-lined boulevard and animate the lakefront with four parks, each centered around destination piers. One of the parks, “Law Park North” would feature a reshaped lake edge with a dramatic pier and boathouse extending from King Street, a sandy beach, a restaurant and event venue, outdoor event and performance space, a hillside playground and another pier extending from Wilson Street.

Sasaki’s plan would prioritize an ecologically vibrant waterfront with green infrastructure like raingardens and wetlands. It then divides the site into four districts. One of the districts, “Law Park Ledge” to the east of Monona Terrace, would include a new park over John Nolen Drive, an amphitheater, boat house and restaurant.

Agency Landscape + Planning’s proposal features three districts with the most ambitious, “City District,” centered around Monona Terrace. Under the plan, the space around the convention center would be regraded to form “Monona Hill,” rising from the lakeshore and wrapping around the back of Monona Terrace where it’d be level with Wilson Street, to create an eight-acre “land bridge” uniting the east and west sides of Law Park.

“I am excited that we are at this point,” city parks superintendent Eric Knepp said. “Each design demonstrates a vision for this public space that improves the experience at a human scale. “They each have thoughtful approaches to improving access and addressing the grade separation between Downtown and the lakeshore. They each demonstrate the community’s desire to see the space utilized in a variety of ways.”

The design teams will make in-person presentations and engage with the public at a meeting sponsored by the Ad Hoc Committee at 6 p.m. Thursday, at the Central Library Downtown.

‘Voices of the Lake’

Sasaki’s plan, “Voices of the Lake,” would emphasize an ecologically vibrant lakefront with green infrastructure like raingardens and wetlands and seek to create stronger connections between the lake and Downtown and nearby neighborhoods with improved intersections, widened walking paths and separated bike lanes.

The plan features a “story walk” with elements like sidewalk graphics and quotes on walls along the project site’s four districts.

“Law Park Edge,” to the east of Monona Terrace, would include a new park over John Nolen Drive with amphitheater, boat house and community center, restaurant, outdoor event space, beach and swimming.

“Lake Lounge,” to the west of the convention center, would showcase the lake edge with new areas for food trucks and a new bridge system to the state Capitol. The “Community Causeway” seeks to make John Nolen Drive safer for pedestrians by reducing traffic speed and improving bike and pedestrian crossings while using raingardens and wetlands to clean stormwater coming from the roadway.

The City District centered at Monona Terrace would transform the space around the convention center to “Monona Hill,” a signature waterfront park meant to complement James Madison Park on Lake Mendota. Improvements could include a “community lawn,” amphitheater-like spectator spaces, fitness amenities, a dog run and more.

The “Causeway District” seeks to engage pedestrians with nature along a restored marshy edge. The “walk on water,” an interpretive boardwalk trail would run the length of the project site but be separate from the “fast” Capital City Trail, popular with cyclists. The new walkway would offer a route for slower strolls and places to stop and would be supported by a structural system that mimics a breakwater or artificial reef.

A “Park District” at Olin Park would feature a shoreline marsh, a circular segment of the “walk on water” curving above the lake with spots for fishing and overlooks, an adjacent beach, and improved parking.

Corner’s proposal, “The Wild Lakeshore,” would transform John Nolen Drive into a green, tree-lined boulevard, “re-wild” the shoreline to improve lake health and water quality, connect the city to the lake with green streets, crossings and decking over John Nolen Drive and develop four parks centered around destination piers.

“Law Park North” would have the reshaped lake edge and feature a pier extending from King Street with boathouse. It would offer a beach, a restaurant and event venue, dog run, outdoor event and performance space, a hillside playground and another pier extending from Wilson Street.

On the other side of Monona Terrace, “Law Park South” features a striking pier extending from Hamilton Street, thick green shoreline and multiple opportunities to access the lake including a sandy beach with food stand, boat launch and boardwalks.

Monona Terrace would get a new circular ramp to the rooftop terrace and a wide fishing pier along the shoreline to replace the chest-high wall overlooking the water now.

The northern section of Olin Park would be extended by a new marshland, creating spaces to explore by kayak or canoe. There would also be a nature center and a “Discovery Pier” with views of the Capitol.

“I am very pleased that each of the teams created designs that were responsive to the direction provided by the city and Ad Hoc Committee through the process to date,” Knepp said. “The designs will certainly spark dialogue and conversation about how we should move forward.”

The Lake Monona Waterfront Project is tied to the city’s transformation of a two-story building and 3.65 acres of shoreline next to Olin Park, purchased by the city in 2019, into a community amenity with Parks Division offices; the reconstruction of John Nolen Drive, slated for 2026; and creation of a “Destination District” around the Alliant Energy Center, aimed at connecting the South Side to the lake and Downtown.

The city spent $260,000 for a consultant to produce a 216-page preliminary report completed in May 2021. It is spending $75,000 apiece for the three finalists — half of which is privately funded by the nonprofit Friends of Nolen Waterfront — for design challenge stipends and an additional $200,000 for the chosen team to refine the preferred master plan.

“The Lake Monona Waterfront Master Plan will guide the design and development of this part of the lakefront for decades to come, so it’s important that we get good feedback now about how to make the waterfront accessible to our whole community,” Rhodes-Conway said.

The Ad Hoc Committee is expected to recommend a preferred master plan to the mayor, City Council and Park Commission by Sept. 1.

Madison has invited three finalists for its Lake Monona Waterfront design challenge to present their vision for the future of the shoreline from Williamson Street to Olin Park. Here are their concepts.

‘Voices of the Lake: Monona’s Waterfront.’

What: The public is invited to hear and interact with the design teams as they discuss their visions for the John Nolen Drive lakefront.

Meet the three nationally renowned finalists for the Lake Monona Waterfront design challenge at 6 p.m. at the Central Library.

One of these 3 designers could transform Madison's lakefront

Three design firms who have designed public spaces around the globe are competing to reshape the Lake Monona waterfront between Olin Park and Williamson Street.

Proving Madison could "put two bricks together," the city in 1997 built Monona Terrace, a design started by Frank Lloyd Wright. In 25 years, nearly 8.9 million visitors have seen it.

A dryer fire Wednesday morning caused the evacuation of a Far West Side café and adjacent businesses, but no injuries, the Madison Fire Department reported.

More than 200 people jammed into the Central Library's main room Thursday evening to see bold concepts that would reshape and animate 1.7 miles of shoreline.

Goldman Sachs Sees Oil Heading to $100 a Barrel by 3Q

Goldman Sachs Sees Oil Heading to $100 a Barrel by 3Q 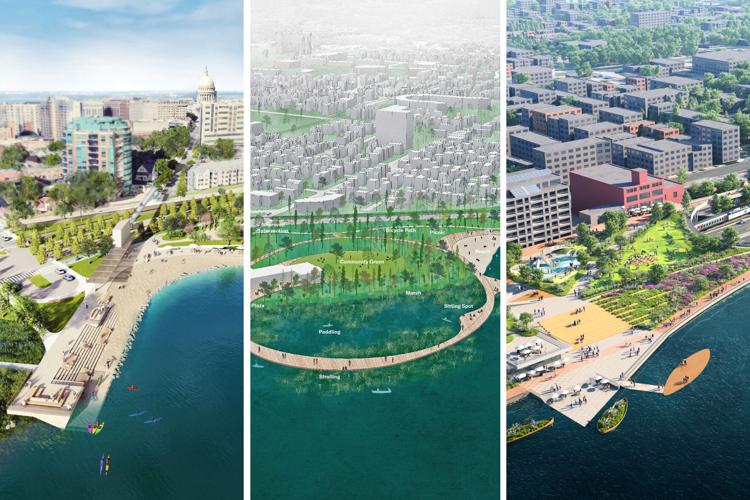 Concepts for a reimagined Lake Monona Waterfront from three finalists in a city design competition include, from left, a pier and beach extending from South Hamilton Street, a whimsical boardwalk for slow strolls and an elevated park over John Nolen Drive. 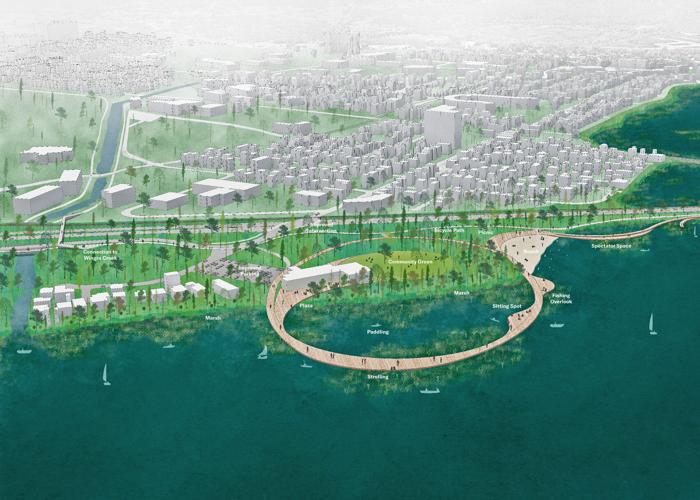 Agency Landscape + Planning's proposed "walk on water" at Olin Park, an interpretive boardwalk separate from the nearby bike path for slower strolls. 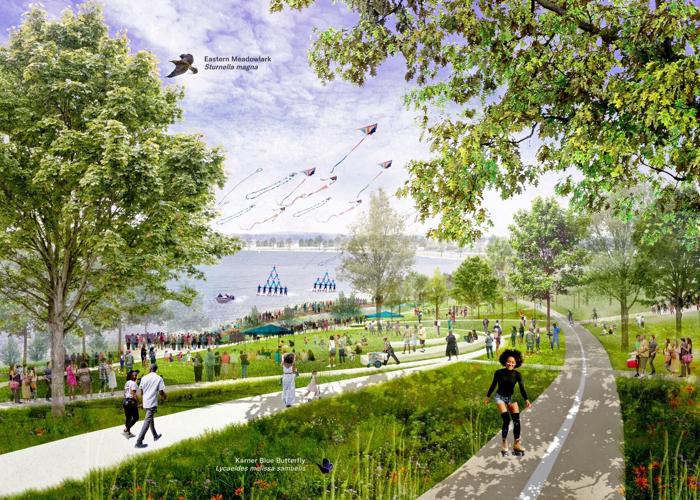 Agency Landscape + Planning's "Monona Hill" would rise from the lakeshore up the sides of Monona Terrace. 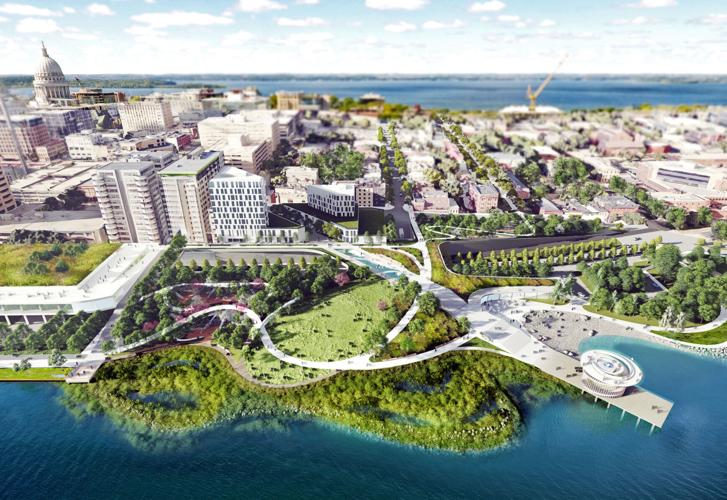 Sasaki's "Law Park Ledge," to the east of Monona Terrace, would include a park over John Nolen Drive with amphitheater, boathouse, community center, restaurant, outdoor event space and beach. 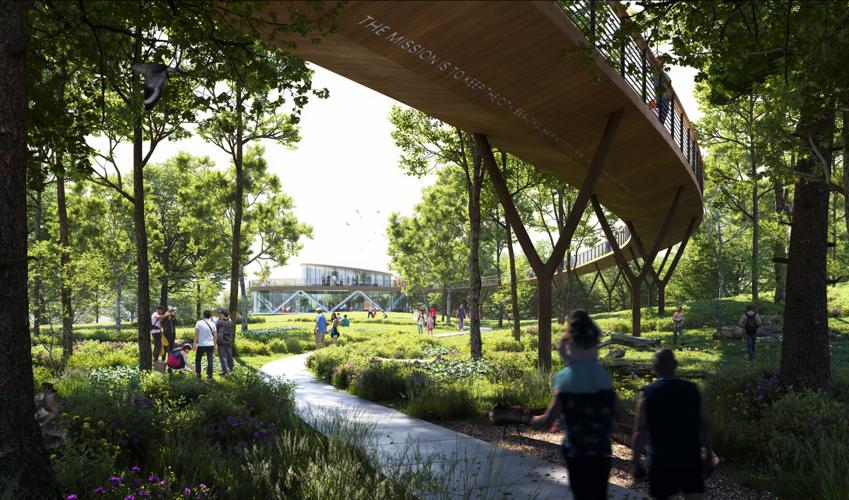