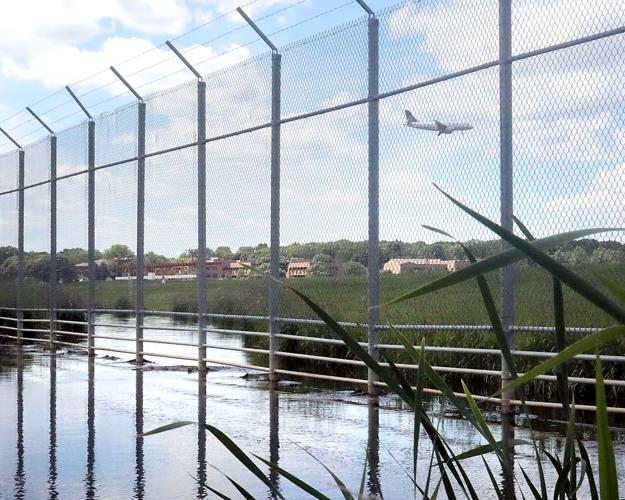 Dane County is suing the Wisconsin Department of Natural Resources over requirements that it monitor toxic PFAS compounds in stormwater that drains from the Dane County Regional Airport into Starkweather Creek, which empties into Lake Monona. 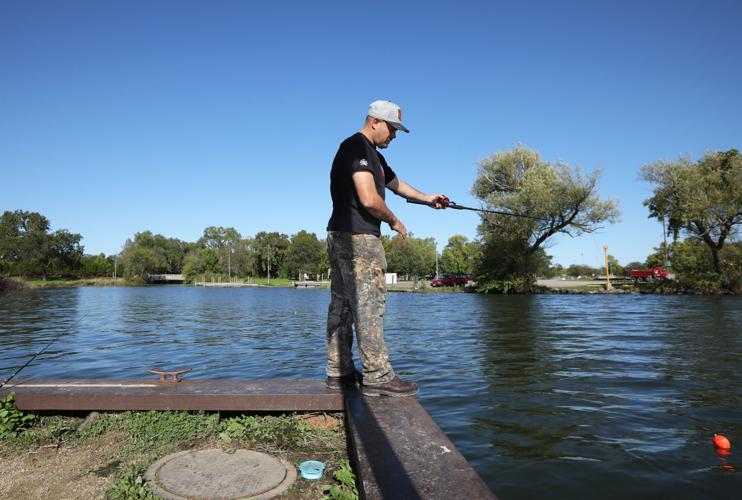 John Fox, of Madison, fishes for muskie where Starkweather Creek enters Lake Monona on Madison's East Side. High levels of PFAS have been found in water and fish from the creek.

Dane County is suing the Wisconsin Department of Natural Resources over requirements that it measure and limit toxic chemicals being washed from the Madison airport into local streams and lakes.

The county is asking the courts to strike PFAS-related conditions in the permit for stormwater that drains from the Dane County Regional Airport into Lake Monona through Starkweather Creek, where the DNR has warned people to limit consumption of fish because of PFAS compounds linked to cancer and other illnesses.

The DNR issued a new five-year permit in April with new conditions requiring the county to test the water leaving the airport four times a year for 33 PFAS compounds and to come up with a plan to reduce contamination in the runoff.

That plan is supposed to use “best management practices,” including spill-response procedures, consideration of alternative foams and documentation of handling and the decision-making process when selecting a particular foam.

According to the DNR, there appear to be “significant” levels of the so-called “forever chemicals” in the storm sewer discharge. Testing last year revealed concentrations of one compound known to accumulate in fish at levels thousands of times higher than recently approved surface water standards.

The permit also requires the airport to use “best management practices” to reduce the amount of PFAS in its runoff. Those practices include using alternative foams, using controls to prevent foam from being released into the environment when it must be used and continuing to test for PFAS contamination.

In a petition filed May 31 in Dane County Circuit Court, the county argues the requirements are illegal because the DNR already ordered cleanup of the PFAS contamination under a separate pollution program that is also the subject of a legal challenge.

Airport spokesperson Michael Riechers said the county will conduct testing in accordance with its cleanup plans, which, according to the DNR, require one round of tests that were completed last year and another after work to seal up the storm sewer pipes, a project that remains on hold.

Riechers did not respond to subsequent questions about where and when the county has agreed to test the stormwater.

The county, which has sued dozens of manufacturers in an effort to recoup cleanup costs, claims the additional permit conditions will result in increased costs, delays and “substantial administrative burdens, including probable controversy arising from unreliable analytical processes.”

Riechers said the county has not estimated the cost of the sampling.

The county also claims the permit requirements could “conflict with” and delay cleanup efforts, though Riechers said “we wouldn’t be able to speculate with any certainty” as to how.

A DNR spokesperson declined to comment on the county’s legal challenge, but the agency addressed some of the county’s concerns when it approved the permit conditions, noting the stormwater permit serves a different purpose than the remediation program.

While the remediation program requires the county to clean up historical PFAS contamination, the DNR said the stormwater permit conditions are designed to limit how much PFAS is being spread into surrounding waters.

The DNR contends it has the authority to impose conditions to ensure runoff meets state water quality standards, and given the “significant concentrations of PFAS” found in stormwater outfalls, the DNR says the permit requirements are needed.

‘Do the right thing’

Maria Powell, founder of the Midwest Environmental Justice Organization, called the county’s attempt to get out of permit conditions “appalling.”

“It shows total disregard for the health of the people, wildlife, and environment downstream of their oozing PFAS mess,” Powell said. “All this means is that they don’t want to spend the money.”

Powell questioned why the county would resist “weak” requirements like monitoring, which would provide five years of trend data and show whether experimental treatment methods are working.

“I think that’s what they don’t like,” Powell said.

Lance Green, co-chair of the Friends of Starkweather Creek, said the county “should do the right thing for the health of our waters here in Madison.”

“They should be making every effort to stop the flow of PFAS off the property,” Green said. “Every day I think, it’s still oozing out. People are eating the fish.”

County Board Chair Patrick Miles said he was told by the administration that testing would continue under the remediation program, but did not know what tests would be required.

“From my perspective, the county needs to honor its commitment to monitoring PFAS,” Miles said. “It’s absolutely necessary for people who consume and play in it. And eat fish from it.”

Sup. Yogesh Chawla, whose district includes Starkweather Creek, said he was frustrated by an apparent attempt to shield the county from liability.

“We should be testing this,” Chawla said. “And we should be doing it even if the DNR is not compelling us to do it.”

In 2020, the DNR approved the county’s plan to find where PFAS is seeping into the 14-mile stormwater system and seal up leaky pipes while the county continues testing an experimental technology designed to remove PFAS from the stormwater.

Little is known about that treatment system, which uses a technology known as bioavailable absorbent media, or BAM, to capture the chemicals.

The DNR initially reported it wasn’t working, though Riechers said the county has continued using it after initial results were “positive.”

Samples taken in the summer of 2021 showed concentrations of PFOS, the compound that accumulates in fish, were more than 2,500 times higher than surface water standards approved earlier this year by the state Natural Resources Board.

Riechers did not respond to requests for additional data.

The plan to seal up the pipes suffered a setback when the sole bid came in “significantly” over the roughly $1 million budget. Riechers said the county is in the process of reworking those plans.

The DNR’s authority to enforce the cleanup plan is the subject of a separate legal challenge brought by Wisconsin Manufacturers and Commerce and an Oconomowoc dry cleaner.

Earlier this year, a Waukesha County judge ruled the DNR must go through a lengthy rulemaking process before it can require cleanup of PFAS, though his ruling remains on hold while an appeals court considers the issue.

Meanwhile, the National Guard is conducting its own investigation into the PFAS contamination under a federal process that could delay cleanup for more than a decade.

PFAS: A selection of State Journal coverage of forever chemicals

Recovery crews searched Wednesday for two men who were swept away by fast-moving water in a rain-swollen drainage ditch in Milwaukee after jumping in to try to save a 10-year-old boy.

The bodies of two men who went into a rain-swollen drainage ditch in Milwaukee to try to save a 10-year-old boy have been recovered, officials said Thursday.

A fire Thursday involving trash and recycling bins caused $40,000-$60,000 damage to a South Side home, the Madison Fire Department reported.

The TPC Network has announced that it plans to license the club, which will be renamed TPC Wisconsin when it reopens next year under the design of pro golfer Steve Stricker.

Chemguard, which operates a foam manufacturing plant in Marinette, and its parent company, Tyco Fire Products, had the case transferred to federal court, where it has been consolidated with hundreds of other cases.

The lawsuit seeks punitive damages, as well as reimbursement for the costs of PFAS investigations, cleanup and remediation.

The state of Wisconsin is looking for a contractor to dispose of some 25,000 gallons of firefighting foam containing toxic forever chemicals.

The valuable carbon-trapping resource can be used for pallets, furniture and even commercial construction.

Once again, groundwater council calls for action on PFAS, nitrate

The county has not provided data to support the claim but says it plans to expand the pilot to other contaminated parts of the airport.

Dane County is suing the Wisconsin Department of Natural Resources over requirements that it monitor toxic PFAS compounds in stormwater that drains from the Dane County Regional Airport into Starkweather Creek, which empties into Lake Monona.

John Fox, of Madison, fishes for muskie where Starkweather Creek enters Lake Monona on Madison's East Side. High levels of PFAS have been found in water and fish from the creek. 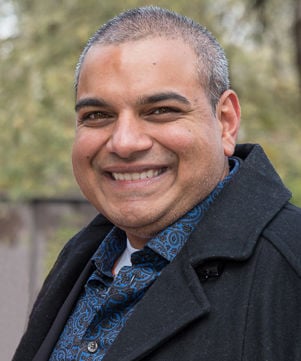 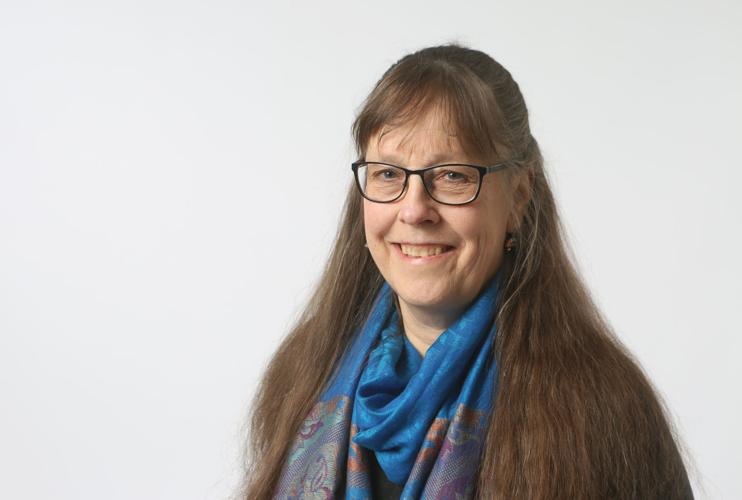